A sad adieu to Meteora camping – and our French neighbours (a young couple, well younger than us, travelling for a year with a 18 and 15 year old children) – lovely location – shame about the €10 charge for the washing machine – but, heigh ho… A nice short drive to Trikala – parked 4km outside and biked in – puncture/tyre ok but the usual chain retensioning. Guess what comes first – coffee, of course!  Fort – no K9s – pity – old Mosque – a nice non-touristy town – but not very memorable…

Another short hop to Pyla – and a wonderfully secluded wild camping spot by a river gorge and near the pack horse bridge – very quiet……. and much more memorable.

A river runs through Trikala, but this seemed to be the only section you could walk … missed a trick in Trikala!

A hotel before and now a shop named after our dog. 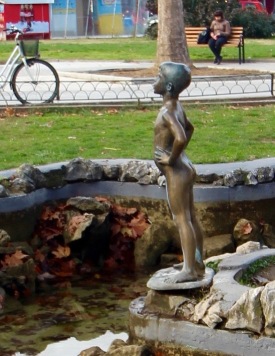 The fountain was switched off, but this little lad still had a dripping willy!

Trikala is flat and bicycle friendly … there are a couple of bike lanes, but not easy to navigate with the Os-car when cars and trucks park in them! 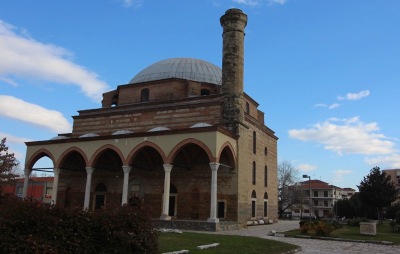 Koursoun Tzami: a restored C16 mosque with a small display inside … the gate keeper slept whilst we looked around, headphones on and chin sunk into his chest.

AM – our first run for 2 weeks! K also did her Pilates…..  walk to the old bridge – major school party in attendance – all part of the Oscar admiration society, of course.  As last night’s ramp down in to the parking was a bit steep, we used a different route out which led to town parking and – coffee – is there any coffee left in Brazil?  (Sorry, I’ve used that line before…).   Old mosque, purchases of leek and pork sausages, fruit (no ice cream or chocolate – new weight loss regime?).

Lunch in Jez and sails trimmed and set for Arta – 3 hours driving. We had intended nightparking at a reservoir – but the roads looked too narrow – so a lovely city centre parking. Lo and behold – the same French family we had met in Meteora camping!  Their young dog “Ice” and our Oscar get on famously – tearing around the parking – each trying to hump the other!  Poor Oscar was worn out… but oh so happy!

A catering first for Jez: A EUR 1.99 whole chicken in the pressure cooker.

Along the gorge in Pyli … you can just spot Jez. 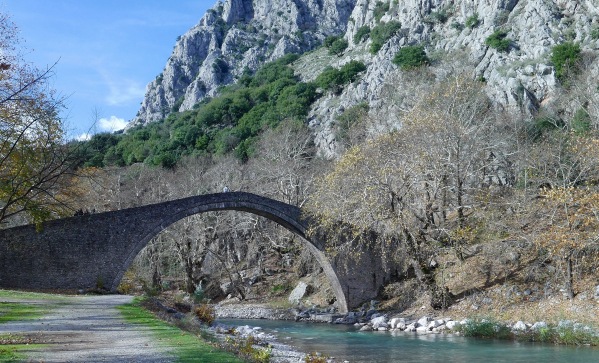 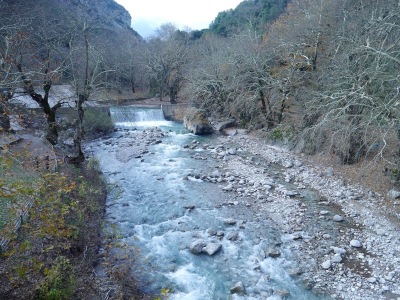 I ran at dawn – and she ducked!  Well – 9:00 dawn – second day in succession – I’m on a mission with a structured training plan – to have a serious race at the end of February. The plan is heavily disciplined around ‘fartlek’, getting lost, lots of sleep – and ‘somno vinoque’ – and some running, too…….. K rolled out her gangplank and captured pirates of the Aegean!  Oh dear, another old line….. the faithful reader(s) will work it out…  (Hmm …. Pilates).  Our new French friends were departing and offered us the opportunity to park and join them and their family south in Greece at a rental house – the people we meet are amazing!

Arta is what we would call (after 1 week) the real Greece – normal, non touristy, busy. The number of coffee locations is incredible – the entire town was out socialising over coffee and small cakes. Again, the castle grounds were non-dog friendly. Quirky shopping bazaars, Ottoman buildings, ‘Fish’ street, hardware shop street – K got a longer cable for our Cadac gas BBQ for all of EUR2.  Jez provided soup for lunch …l eftovers from the €1.99 chicken!

Fab and easy drive to Koronissia, as recommended by Peejay, who updates a Googlemaps of sleep spots.  Not our original plan, but when you get a recommendation, good to go with it.  Stunning drive across the causeways –  Peejay said we may be too late to see flamingos and pelicans .. but saw lots.  A really lovely spot with water on both sides… hope the tide doesn’t come in!   Definitely one of the best wild camping locations…..

The grandiose 5 domed cube is supported by a cantilevered-pilaster system, that looks unsafe. 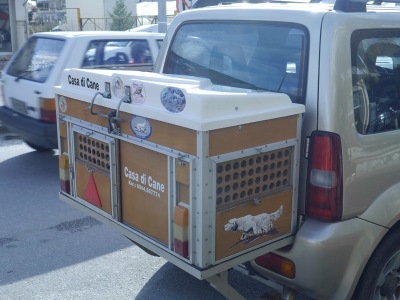 Seen a few of these dog crates … guess what Santa may bring you?  Have you been good?

The restored packhorse bridge:  a subject of song and poem … the builder was fed up with his foundations being washed away he took advice from a taking bird … he sealed his wife up in the central pillar and the build went swimmingly thereafter.  Seem to have heard this theme before!

Wrong camera lens, but you can just make out a pelican along the causeway to Koronissia. 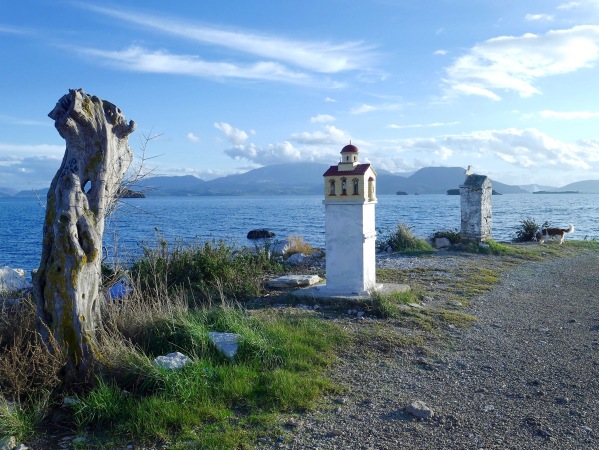