A good night’s sleep in the hotel and I had a luxuriant BATH!  Being an old fashioned establishment, except for the incongruous piece of modern ‘art’ on the wall, the hotel had a deep and wide steel bath.  In I went for a wallow.  J was out with CO2 …. just as well as neither dog can understand my voluntarily getting wet!

We SUSPECTED that the garage was telling porkpie pies about the MH being ready today … but the pressure was on as the insurance company had rung them.  We did KNOW that it would not be ready till the afternoon … so we went for a wander around the town.  Lovely.  Narrow hilly streets leading up the the citadel with a museum.  We didn’t go in … we’re finding increasingly that unless a museum or site is unusual, we can’t be bothered to take turns when CO2 are not welcome.  A super Belvadere – which showed us the entry to a campsite the Tourist Office had recommended for our 7.55m van that took dogs … no way Jose!  A tight turn over a bridge … I later read reviews and vans of 7m had struggled.  We will only just have got Jez back .. don’t want another issue!  So Park4Night out and we routed to 4 campsites to check them out.  2 no dogs and 2 OK.  Plan for tonight … if we get Jez back!

Corte is a gem.  Beautiful and historic.  Pascal Paoli retuned here after exile and made Corte his seat of Goverment from 1755-1769, the first Corsican printing press and the first University.  However, in 1768, France bought Corsica from the Genoese and Corte lost its status. The university was closed and only reopened in 1981.  The town has a strong sense of independence – we noticed a lot of signs in Italian … no … the Corsican language is based on Italian.  Lots of Graffiti about independece and hating the French.  The University, named the Pascal Paoli, is the driving force behind the resurrection and preservation of Corsican as a language.

Whilst out and about, I took a call from Europcar … just checking we’d not absconded with the hire car.  Although RAC Commercial on behalf of Fiat Assist had extended, and extended several times, our keeping the car, it transpires they had not told Europcar!

A trip to the supermarche for lunch which we ate in in the car park, whilst we waited for 2.00 and the garage to open up after lunch.  No answer … no answer.  Here we go again.  do we stay or do we go?  We elected to drive back down to Bastia … at least we’d be closer if Jez were to be ready.  A call en route … yay… just finished ‘this minute!’  Interesting how the garage had told the insurance they were in regular contact with us … they’ve not rung us once!!!  Anyway … hot foot to pay and then drive around the corner to the commercial vehicle yard to get Jez.  Unloaded car into van.  Convoy to Bastia airport to drop car and back up to the hills to one of the campsites we’d inspected earlier.  A lovely shady river side spot.  We’re HOME AGAIN.

OK… local map and that’s the recommended campsite down there … too tight a turn! 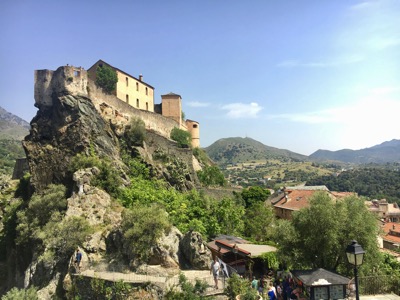 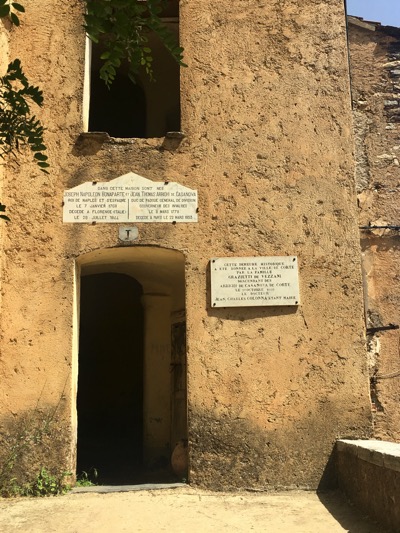 Napoleon and his brother were born in this house, according to the sign!!!  Amazing more wasn’t made of it.

Whilst on a water and soft refreshments spot(!), a convoy of MGs drove through the town. Many were right hand drive but Belgium and Swiss plates.

We chilled and did admin.  I discovered some great off lead walking up hill!

We sallied forth with the bikes and the Os-car.  Flask of coffee and picnic on board.  We’d been told, by the Tourist Office, that the valley road was not suitable for motorhomes.  We would have been fine for the first 6km, as there was a campsite nestled amongst the trees and bend in the river.  Thereafter, it would have been impassable to us.  We have to think about these things again now that we are back in Jez.  What no one had told us, is how relentlessly steep and uphill all the way it was.  I was in full Pleasure Mode (full power) and 1st gear for a good chunk of it.  At one point a French car slowed to let me continue the ascent, he then gave me a clap … he’d no idea we had no intention of making it to the end or that I was using full power.

But the scenery was stunning.  I couldn’t take any pix one the way up, or I’d not have got going again!  We kept going till a cafe as J deserved a cold beer … their lunch menu was light and not extortionate, so the picnic was aborted!   We didnt make it all the way along the valley to the car park; we’d done enough with 10k uphill!  It was a super easy plain sailing all the way down. 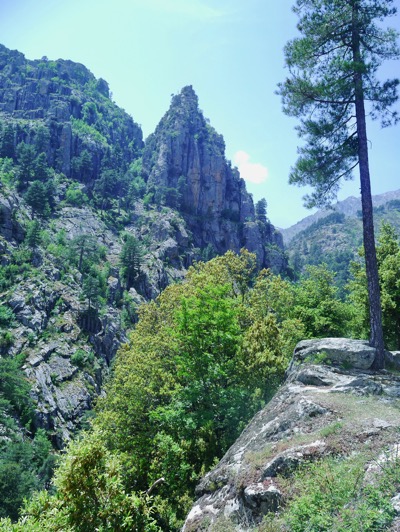 The pics really don’t do the scenery justice.  The guide book described it as the most attractive gorge… certainly the best we’ve seen so far. 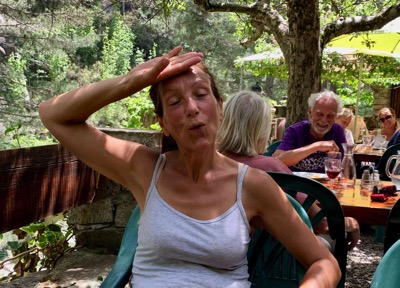 We’d planned to walk the Travignano Valley; footpath only.  But the forecast was low 30C … we aborted this idea as far too much like hard work in this heat and humidity.  Especially as the first 1.5 km would have been along the road with two over excited dogs.  As well as water for us, we have to carry even more for CO2, making heavy back packs.  So we did another chill down / admin day.  These seem to be a bit of a feature now it is much warmer.  We did clamber up steps to the town to find the cash point as the campsite didn’t take cards.  J had another deserved cold beer and we both had ice cream.  A couple of typically Corsican flavours are Chestnut (mountains are covered in Chestnut trees) and fig.  Fig jam is also served like quince jelly, as a side to cheese.

Being a bridge man, J was able to inform me that his was cable stay and suspension.

I’m a woman, what’s your super power?  But is it symbolic that it was on bin?