(wonder there was such a couple – and to have a town named after them!?)

Continuing our tour around Lake Malaren, we attempted to get to Birka, the first ever town in Sweden. 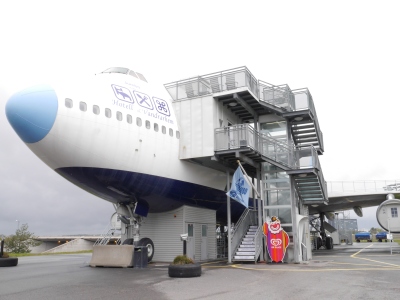 Travelled for quite a way up a peninsula and came across a ferry to an island.  An overdue look at our map, showed that Birka is an island off another island and a more careful and belated proper perusal of the guide book informed us  that Birka was reached by boat from Stockholm in summer months!  Quick U Turn at the ferry dock much to the bemusement of the waiting ferry traffic!

Continued to West to Mariefred … and paid just over a fiver for our first Swedish ferry.  We travelled as a car (we did check our category), wish the Oresund Crossing considered us so …

First Swedish ferry, as a car 🙂

At Mariefred we saw the impressive Grisholm Slott.  Apparently also best viewed from the water … in the summer!  However, still attractive with another wooden housed town.  Probably hideous in high season as there were lots of tourist attractions … tourist railway and mini golf.  But you we all know, we are not here in high summer …

Gripsholm Slott: the large tower is the theatre and it was plastered but then bricks painted on to match the rest of the bricks … same they did not get the colour quite right!

We know what you’re doing!!! And the paint did not come off.

Raining pretty much all day, so we decided to cut our losses and head for the coast.  Parked up at a mini marina at Norrtalje. 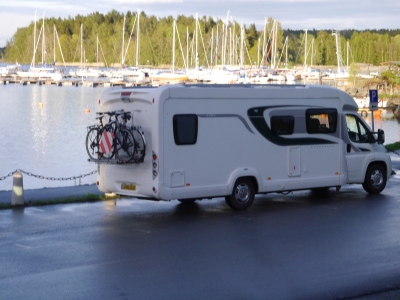 A power walk into Norrtalje and a wander around the town.  Nothing much open…

Decided to put in a biggish drive.  Stopped off along a forest dirt track (!) and had lunch.

Lunch and unmentionables in the woods!

Forsmarks deserves a mention.  Like a model village with the Count’s manor house.  English garden and money from ironworks.  Museum not open! 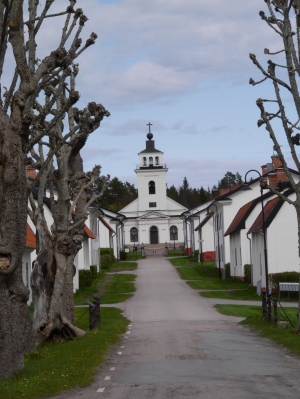 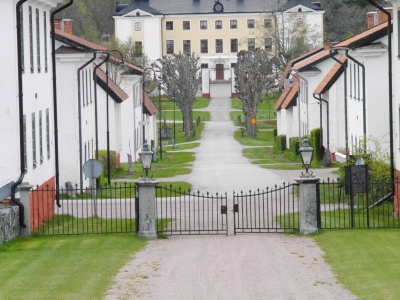 Formarks Slott: Count’s family owned the village and iron works until the 60s

Headed off the E4 (sort of motorway) and spent the night amongst the trees in holiday home land, a place called Trodje and had a BBQ.  Very peaceful.

Did you know that 50% of Swedes have access to a holiday cottage?  20% have ownership.  Apparently it is what many aspire to … a small cottage and the simple life … sort of what we have done, I guess.

James did his second run along the dirt track …and we headed off to the High Coast.

A stop on the way at Hudiksvall, which had nothing to recommend it other than the picturesque warehouses along the quay.

Saw several SCA paper mills / pulp factories at Sundsvall – reminded me of the good times working for them.

We parked up at a picnic area, again with lovely views over a lake near Nordingra in the middle of the High Coast area.

Shower and prune night …. fortunately J got me out of focus!  Notice the glasses, or I can’t see the little feckers!

Nordingra pitch, over yet another lake 🙂

We planned to spend the day walking but had a fairly late start as sorting the insurance claim form out with my UK based and much put upon PA!  Thanks Mum!!!

Despite the late start, the Tourist Info did not open until 1.00 – duh! – but a fantastic lady in an open air museum not only hunted me out last year’s leaflet on the High Coast but hand wrote directions for a walk.

It was quite a clamber over and under the tree branches and then over the rocks along the coast, but lovely.  Walked back along the road through another holiday hut area.

Clamber along the coastline

Having read the leafelt we were given we realised there was quite a lot to do in the High Coast, so we headed into the Skuleskogen National Park.  Spent the night in the car park amongst the pines and had a BBQ followed by a fire log.

BBQ followed by firelog in the national park car park – we weren’t the only one.

We have now been travelling for 4 weeks …. it really is 4 weeks since we spent the night on the drive with Ian and Jimmy in Rusty!

We walked for about 5 hours … a little weary at the end, but it was stunning.  The pix can do the talking.

Gorge aka Krevass. You look down and then walk (clamber) through here 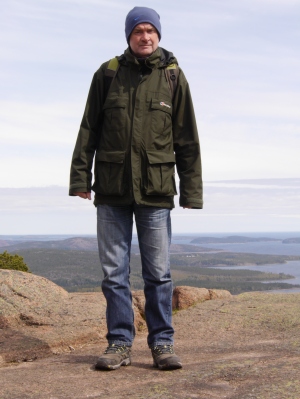 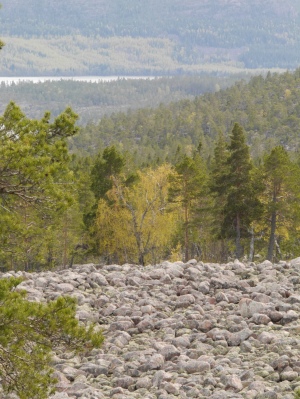 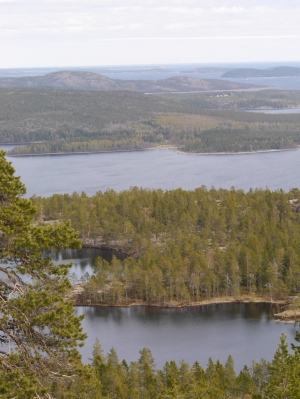 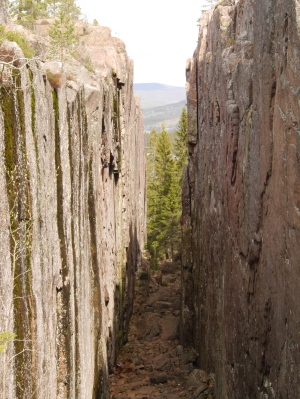 Looking down on the gorge and out to sea

We even found traces of snow and we have a long way still to travel north! 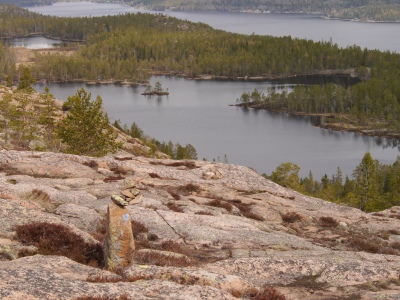 We needed Dave to tell us about the rock … mostly granite. Paths really well marked with coloured dots and small cairns. 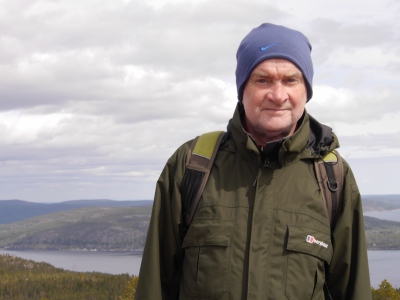 Wrapped up as the winds are chilly 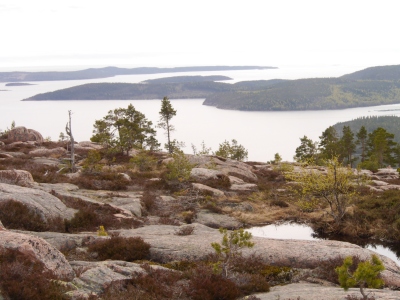 Definitely a land of trolls and fairy tales

We had imagined that the forests will be all the dark green of pine trees, but the silver birches and spruce add variety. 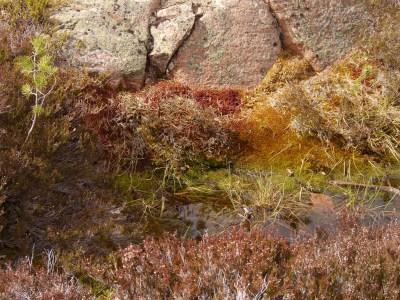 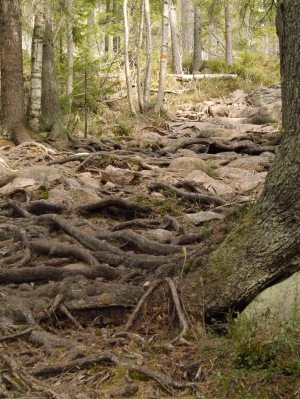 Our route … hence mentions of clambering!

Moved Chardonnay to the visitor centre underneath Skuleberget – a) as no phone signal where we were and b) trying not to stay more than one night in one place since the break in.  Heating on as we are feeling a little jaded after all the climbing up and over.

We plan to climb up this mountain tomorrow and then push on North.  We have booked St Petersburg from Helsinki and also I will do a flying visit home to see Munchkin on 4th – 6th June.  🙂