Thank you Matti from Mikkeli in the Lakeland area for the monastery suggestion.  Indeed, many thanks for all your suggestions – they are a large part of our route planning.

We overnighted last night at one of the Valamo Monastery car parks.  As usual adjacent to water, but unusually, we had company.  A Finnish van and a Spanish one – even further from home than us.

After our now regular feature of run and Nork (J up to 3 miles :), we visited the Monastery.  We were not quite sure what to expect as last night we googled a bit about it … lots of intrigue: sackings of head Priest and Financial Director, then reinstatement of both, then sacking again … financial short falls … expanding into whisky making (ready in 2018).  However, is was interesting and the female volunteers really helpful.  It is Finland’s only orthodox monastery and was originally in part of Karelia in Russia and the monks had to flee during the Winter War of 1939 and settled the monastery here – hence now called the NEW Valamo Monastery.  The original church was constructed out of two sheds and the new one was completed in 1977.  In both there are lots of gilded icons, which contrast with the wooden rustic walls of the old church or the white of the new. 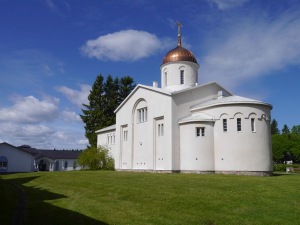 The plan was then to do a decent walk around Koli National Park – we even splashed out EUR2 on a walking map.  Both feeling lazy, so parked up (next to our Spanish neighbours of last night), caught the free funicular to the hotel complex at the top of Ukkko-Koli (the tallest mountain in the Park) and then all of 300 metres (up stairs!) to the summit. 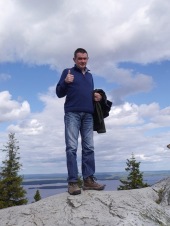 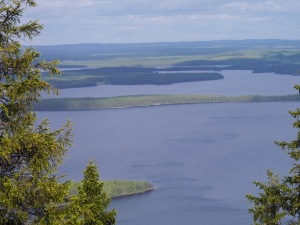 All the lakes feature islands

Now parked up (by water) at Nurmes as will visit the Bomba House here tomorrow (another Matti suggestion :)) 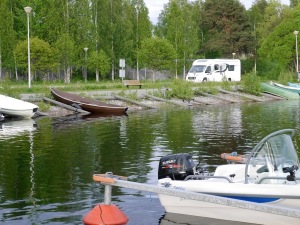