We slept in the national park car park with the empty cars owned by the intrepid serious overnight camper / hikers.  When we went to bed there were 6 empty cars.  When we eventually woke just two remaining …. the poor damp people had gradually come off the the hills due to the heavy driving rain.  The final remaining car belonged to two women who obviously meant business and were going to do the full 80km trek, come hell or high water (which it will be given the rain), judging by their over already over weighted rucksacks, then crammed with food.  We were just thankful that we had such good weather for our walk yesterday.  If it must rain, let it be a travelling day – or two as it turned out.

James braved the weather and ran.  K decided she is a fair weather Norker and went back to sleep.  A long drive and slow going,  given the rain and mist.  Enlivened occasionally by reindeer and their young grazing along the roadside.

I guess the highlight of the day was the Santa Caus village and standing on the Arctic Circle line, whilst trying to not gawp at the souvenir shop prices!  I am sure it is buzzing on a snowy Winter day, but in June with the rain, it was a bit of a damp sqibb.  We followed the red path to Santa, had a chat.  He knew Wembley was in London, so we guess he is a footie supporter!  Asked where we would be come Christmas, so he knew where to find us.  Wonder what he’ll bring?  But we refused to pay the EUR20 for a pic with him and no private pics allowed to be taken … so we can’t show you the real Santa 😦 .   We then wandered into another building: J had had enough, but K followed this path to another Santa.  There are two!?!  Not wanting to be pressed to buy a pic, she skipped over a cord and escaped.  But she did get to see the clock that stills time so Santa can get around the world.  Cool!  No reindeer, despite the sign, a deserted teepee and lots of signs for snow mobile rides (no snow currently – just rain!). 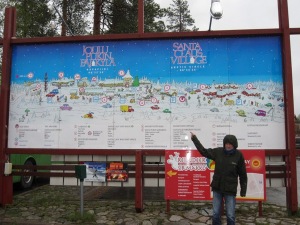 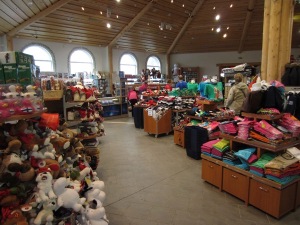 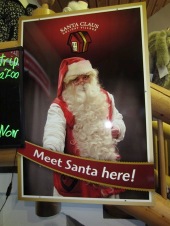 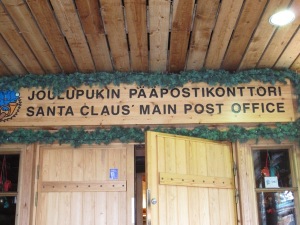 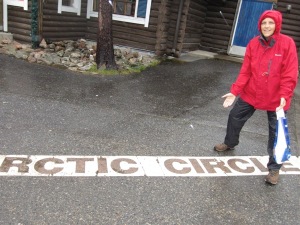 We continued to south of Ivalo and parked up in a lay-by with a FIN motorhome.

59 – Tuesday:  Another grey and MISTY day to Nordkapp

During each evening-end preparations, K usually fills the water bottles for the night time water drinks… I climbed into bed – reached for my water bottle and took a hearty swig – it was pure gin!!!  Is this woman trying to murder me?  The explanation is all to do with colour coded bottle tops – well, she is/was a teacher….. I slept rather well…zzzzzzzzz

We knew today was going to be a long drive .. lengthened by the rain and wind.  Road conditions were better than expected, but still narrower and more bouncy roads than further south.  After J’s run …. in the tearing rain, we set off on our 10 hour drive.

We broke the journey at the Inari Sami centre.  Car park full of motorhomes, all heading in the same direction as us.  A really good museum explaining the lifestyle and changes of the Sami and about life for flora and fauna in the Arctic Circle.  Bears hibernate for 6 months.  Their heart rates drop from 44 hbps to a mere 8.  They do not wake to eat, drink or defacate – before they go comatose they eat something like an ant hill and the resin in this basically forms an anal plug!  Girls, check this.  The truly amazing bit is that in this near death like state, females give birth.  They don’t even wake.  The babies crawl up the body to the breasts to feed and then they all wake in the Spring … pronto – a ready made family.  We thought of Sarah and her recent mamouth labour!  We struggled to get our heads around this and checked it with two of the centre staff. 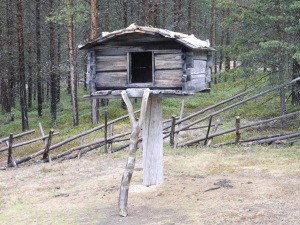 Small Sami storage – off the ground from predators

C18. carvings by prisoners in the Sami courthouse 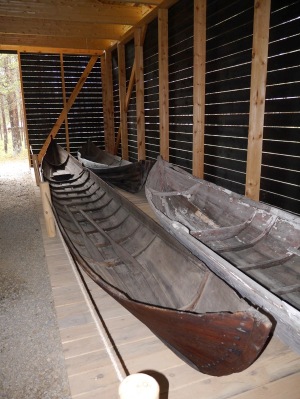 Long drive up to Nordkapp.  We had planned to do a longer route via the pretty salmon river road to Nuorgam, but did not see the point given the weather.   Actually, the scenery changed and opened out more almost as soon as we crossed the border into Norway.  New country number 4 for James. K is at 3 new countries since setting off.  The scenery along the coast is really special.  We got really excited about the possibility of being able to take some evening pix of the Nordkapp cliffs, as the sun came out at about 5.00 p.m., but as we approached Nordkapp, the fog set in – a real pea souper.  Handing over an arm and a leg in Krone, we entered the motorhome carpark … hundreds of misty white forms (motorhomes) … we were not alone.  As the evening progressed … 10.00 now, the mist is just clearing and we can see the outline of cliffs.  Fingers crossed for the weather tomorrow. 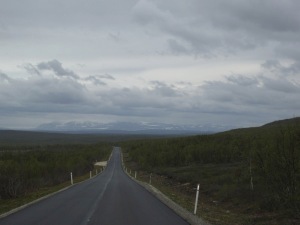 I discovered during the night that we had parked broadside to the gale force wind – we rocked and rolled in Nordkapp !  Morning didn’t dawn because Dawn is a 24 hour girl in the Arctic Circle – but in the AM mist and wind, we realised that our Jakes was full! Dilemma and Debacles ensued – K needed a release…. we won’t bore our reader with too much detail, or we risk losing him/her. Suffice to say, a previously empty water bottle provided some specimens that the doctor would have rushed to the lab – to test for sanity ! Much weelief all round…

Thus weeleased from pressure, we leaned into the force 17.5 gale and headed into the Visitor Centre – pretty good panoramic film about the Nordkapp and Aurora Borealus (boreallus ?). Pricey gift shop, history notes and history notes – oops repetition…  Out into the wind again, we viewed various sculptures – and dashed for the van (we had cleverly moved it head on to the wind by now) – and coffee!  Out of Nordkapp and back down the mountain (its really a very special place and well worth the trip – even with the minor bladderisation technicality). 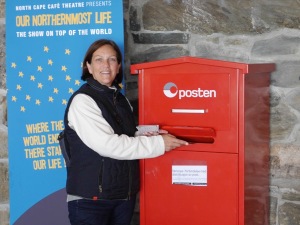 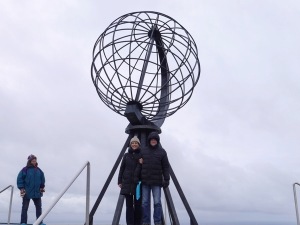 Headed for Alta – with fabulous scenery on the way. 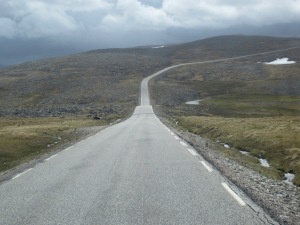 Parked overnight in the Museum car park – next to a motorhome where the folk have made a banjax of getting on their chocks – technical term for levelling the van – we just get friendly… we are happy to roll onto each other at night! 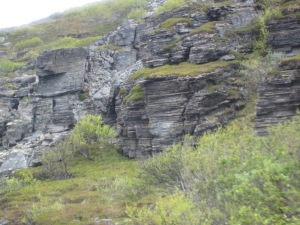