Little to report.  Again having planned a walk p.m., it clouded over and we felt lazy.  Decided against going to the Verstralen islands close by, as we really need warmer and sunnier weather to push us out the door to do a walk.  So will start to head south.  The guide book formed us that Nordkapp to Oslo is the same distance as Oslo to Rome so conscious also of time … we want to hook up with K’s sister and family and Aged P’s near Bordeaux towards the end of July.

Parked up with 3 other motorhomes and a very small hired Ford Escort van – this couple had a clever pull out kitchen, but the bed area was the whole of the rear with no blinds!  And it is light here 24/7!!.  Had a stroll on the harbour wall to the mini lighthouse. 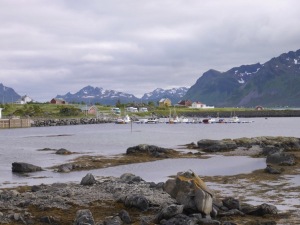 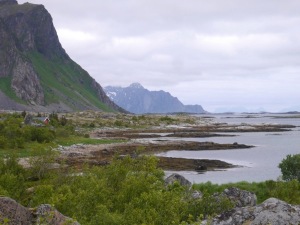 Nice meal and a good nights sleep…. It needed to be for the unanticipated events of the morning!  As per our usual routine, we both prepared to run and walk – J to run 4 miles and K to walk/run for 50 minutes.  K set off a few minutes before J and the routine was set – each having a key for the van.  K returned – no sign of J – he should have returned after about 35 minutes!  K became increasingly concerned – J in hospital – no phone?  Lying unconscious on the roadside?  K decided to drive the van along the route to check for J – last seen giving a cheery wave from the top of a distant hill earlier during the walk/run. After only a kilometre or so, J appeared running towards the van – he had got lost – on a straight road in good weather conditions?  Mishap Number 1.  Does he need a guide dog?  Much relief though for both.

They set off to find a parking area to have breakfast.  A T-junction arrived and a right turn was the appropriate decision for the driver K.  As she turned, she remembered she had left her running shoes at the over night pitch – Mishap Number 2.  Unfortunately, on slamming into reverse, the driver side rear wheel slipped into a ditch which left the passenger side front wheel in fresh air – the van could not move as it is front wheel drive.  Mishap Number 3.  All brakes were swiftly locked – a number of motorists stopped to check if they could help and one lady phoned her husband to bring his tractor to tow us out. A charming chap – builder – was keeping us company – J staying in the passenger seat to provide some weight (?) as a counterbalance.  After some time – and more considerate enquiries from passing folk, tractor arrived – and extricated our home – no damage, but one soft tyre…  Breakfast was heartily enjoyed a bit later…..  When we had both recovered – sail was set towards Narvik…..  No further mishaps – don’t they come in threes?

Photos… etched in our mind!  We had not become blasé, but a missing James and a motorhome in the ditch has been a chastening reminder how fragile we, and our existence are.  A lesson learned and we got off VERY lightly.

Camped overnight just south of Narvik at a picnic area off the road. 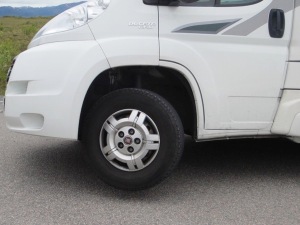 Would that be a a bit of a lean?