Last night we arrived about 7.45 pm at the free motorhome parking near the Trondheim city centre.  We arrived AFTER everyone else though and all the free parkings were taken, so we had to pay until 8.00 pm last night and for an hour this morning.  There were quite a few of us up and ready to rush into a vacated free spot … James was spotting and dressed.  K was at the wheel in her nightie …. You have all seen the starting rows for the Grand Prix? We were initially on the second row – but surreptitiously nipped into the front row… A free space became available – the chequered flag was raised – and K shot away for the first corner – sorry, the free space! Now shooting away at speed in our 28 foot 4 ton van actually means doing zero to 5 mph in the same day! But, she warded off all comers – Lewis Hamilton take notice please…

It looks as if there is no time limit, so we will probably stay here tonight.

We both ran on  beautiful track along the river Nid … yes even K, although hers was more of a shuffle / plod. And the new trainers got wet as it started to rain 😦 and has hardly stopped since 😦 :(.  And we hear bristol is experiencing 24C!

Bought a combined ticket for the cathedral and Bishops’ Palace … Check mate my very own Bishop!  Some folk we met said Trondheim was not very interesting – but we loved it:   the history about St Olav, the Norwegian Patron Saint.  We sat for an organ recital in the Cathedral which included some Vaughan Williams as well as Bach.  In the Bishops Palace we saw the Crown Jewels.  As Norway only had its very own Royal family from 1905, most of the royal regalia is relatively new and sadly, made in Sweden. 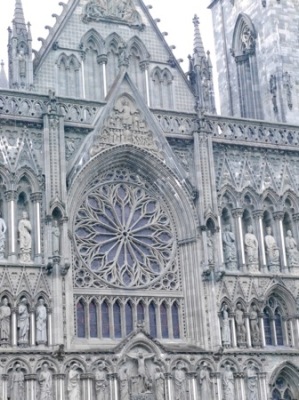 An old bridge to the … old town …  with waterside warehouses. 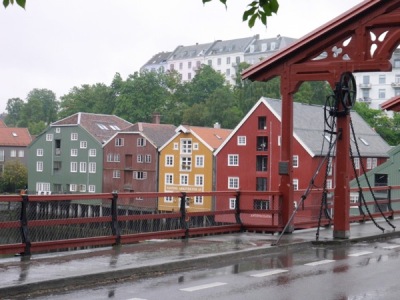 Trondheim invented the worlds first bicycle lift!  A very steep hill – metal channel at the kerb side – you placed your foot on a disc – and the lift took you (and bike) slowly up the hill – K interviewed some of the eager participants and see results below!   if it had not been raining we would have cycled Trondheim, such a shame … would have loved a go. 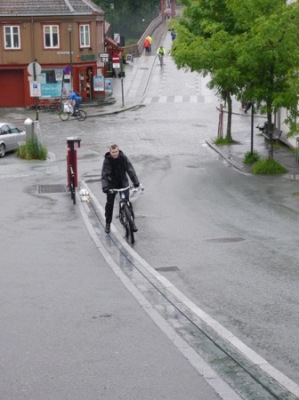 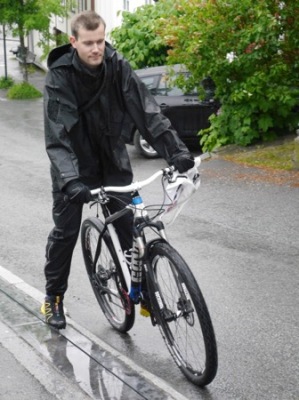 Up the hill to the fortress.  Health and Safety has goon complete mad in the UK and here’s the proof.  The top of the walls of the fort do not have barricades to stop people falling off, just a polite sign reminding people to be careful.  Thus they have not destroyed the fort. 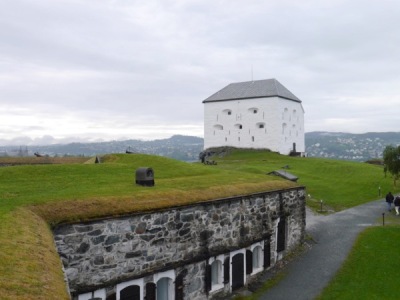 And finally on the walk back to Chardonnay we passed through the old town and later the wooden ‘royal palace’ right in the centre of the town.  As Kings and Queens have to have the benediction (no longer a proper coronation, but similar) in Trondheim Cathedral, they stay here when in town.

After exercise and watching all the waiting vans skidaddle into vacant plots, as we had done the morning before, we set south.  We had read that the coastal road around Alesund was really expensive in tolls and a mega tourist rip off and the scenery no better than else where, so we set forth cross country and saw … some amazing scenery!  And even better, very few motorhomes and traffic generally.  Along rivers, up and down through passes.

And finally to Mardalen waterfall.  A bit of a detour as it is a road in and then the same road out …. but really worth it.  It is the longest drop waterfall in N Europe.  Parked and walked up to the waterfall.

So many lovely wild flowers everywhere.  In Finland the wild lupins were blue, and blue further north in Norway.  Now there are profusions of purple and pink.  And all sorts of other flowers; I recognise only the aquilegia and foxgloves …. so lovely.  The rolling fields in the valleys meet the steep and dark mountains.  Every scrap of land is being harvested for hay.  Even in large gardens and sometimes hung on wooden rows to dry.  Sanguine red cattle

Short drive to just north of Andalsness.  Very late now … nearly 9.00 pm.  Note to selves, must park up by 8.00p.m. latest – we are too tired and yet to eat!  The parking was right on the fjord and although busy, loads of space and peaceful.  Again wonderful reflections in the still water. 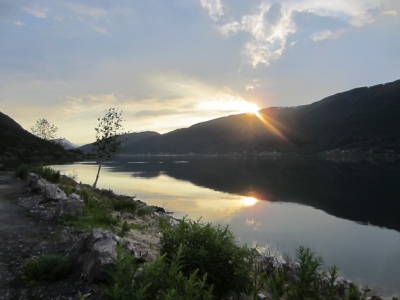 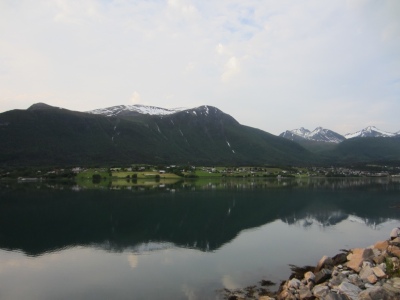