James had passed a terrible night … passing traffic and the odd horn, so we decided against a long walk today.  We did, however, drive to the next town to exercise along the cycle / pedestrian path and then moved onto a proper picnic viewpoint to breakfast.  All this takes time, you know!

And driving around the fjord also takes time … slow bends, two ferries and lots of tunnels.  One tunnel was 16 miles long.  Claimed to be the longest in Europe – does anyone know any better?  There were a couple of wide emergency places built in; they looked like the inside of glaciers due to the lighting: 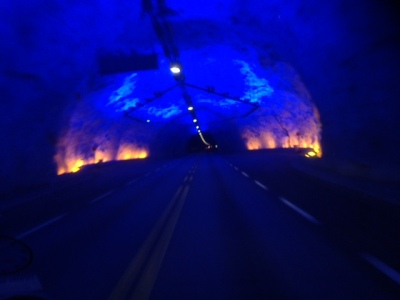 The fjord is really pretty, but not spectacular like some of the scenery … more wooded slopes down to the water and quite a lot of fruit growing.  We had booked the Flam mountain railway for Monday, so had to get on round so no stops, other than for lunch and driver changes. 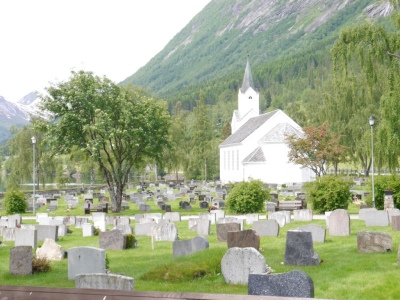 We struggled today to find chemical toilet emptying.  A number of signs have been taped over and the waste point now invisible or removed.  There are also more signs in lay-bys starting no camping.  They are definitely reacting against the number of motorhomers free camping.  However, we ignored a crossed out toilet sign, found the emptying point and found a lay-by with no signs!  We even BBQ’d the second lot of meat purchased the day before and hung our washing on the bike rack…. thumbed nose to ‘no camping’!

Drove to Flam (passing the crowded campsite!) and the visitor centre printed our tickets for us.  Breakfasted and onto the train.  Pretty empty .. would this be due to the weather?  Rather sodden and increasingly wet.  An American couple told us the train was fully booked tomorrow; I suppose it depends when the tour groups get in.  Last time K did this with the Aged Ps and Maddy it was even wetter and mistier, so a slight improvement there.  Nice scenery:  at one point you can look up the valley and see the hairpin path and the shuttered railway track.  The train stops at a waterfall for passengers to take pix.  There is also a dancing blonde and red clad siren swaying to music at this point … one of the local legends.  However, the scenery is nothing compared to further north.  If the weather had been better, we could have taken the bikes up and cycled / free wheeled the 21 km back down.  Perhaps next time … third time lucky with the weather. 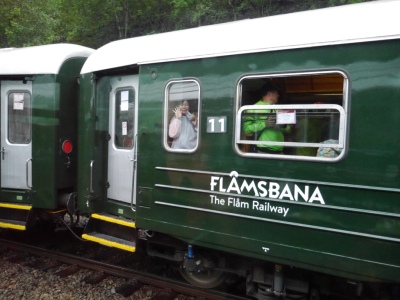 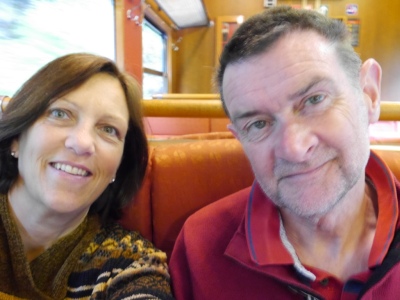 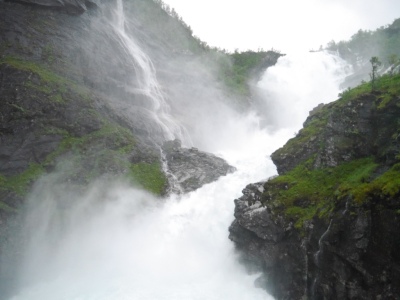 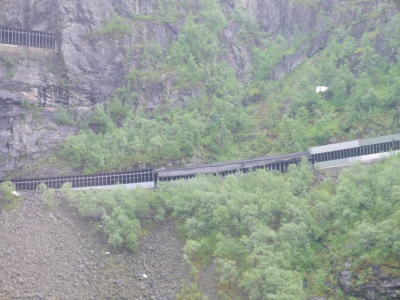 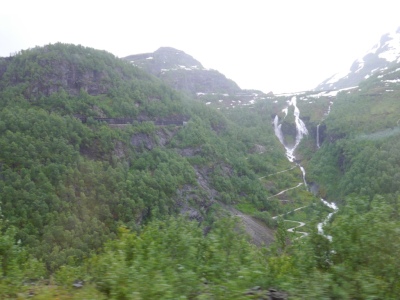