112-Sunday:  Heat to Storms and Montecatini Terme to Lucca

We basically expired from the heat last night … could hardly move.  Had to set the alarm to go off at 5.30 to pack so we could do it at the coolest time of day.  We then went back to sleep for a bit.  Packing to join the vast majority of James’ family  – 28 adults and 3 babies – in Montecatini Terme, located between Lucca and Florence.

The intention of walking the 20 mins from the motorhome parking to the centre of Pistoia was put paid to by the heat for a second time.  We moved slowly to drain our grey and fresh water tanks and emptied the toilet:  we are laying Chardonnay up for a whole week.  40 minute drive to Montecatini Terme …. Sally the Sat Nav had received a map update in April and we have been surprised at how out of date she sometimes is … she was VERY wrong as we tried to find the hotel and kept trying to take us the wrong way down one way streets.

Off loaded our bags.  i am sure no-one else in this smart hotel has ever arrived in an 8m motorhome with luggage consisting of a large blue Ikea and other assorted shopping bags!

Finding the secure parking space was also interesting with the one way system and we had a street name but no number … it was quite a long street.  Once we found it, we were parked with the tourist busses.  A barrier with a code to get in and we are in bay no. 21.  A German bus driver was washing his coach, so in my best German I asked if he would clean Chardonnay.  Obviously, my German was not quite polite enough as he refused and made it quite clear that we should not park there if we had not booked!

Lunch back at the hotel, followed by unpacking and a swim on the rooftop pool.  It was blowing such a gale, that it almost felt cool!

A Prosecco reception and supper …. strike that … a sumptuous 4 course meal … parma ham and melon, pasta course, veal with black olive mash (delicious) and finished with ice cream and fresh fruit salad!  We did not need breakfast this morning!

We awoke to a thunder and lightening downpour – temperatures down to around 24C.  Blissful, but it actually felt quite chilly!!! We packed our waterproofs and they were much used during the day.

Coach to Lucca; regular grid of streets that were established by the Romans and completely surrounded by high ramparts.  Churches were a sign of wealth and due to the silk industry here and the Pilgrim route, Lucca had dozens of them.  15 within the old town are still practicing churches.

San Michelle church – we sheltered from the downpour 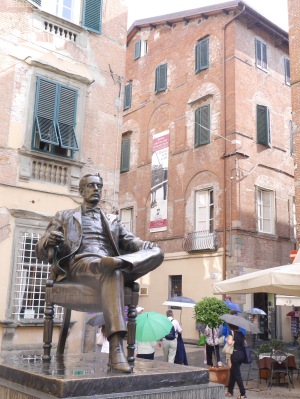 Puccini was born here. His home is the red brick building behind. He chain smoked and always shown with a cigarette. Apparently his spurious lifestyle was an embarrassment to the Luccase!

Architecture with hints of Roman 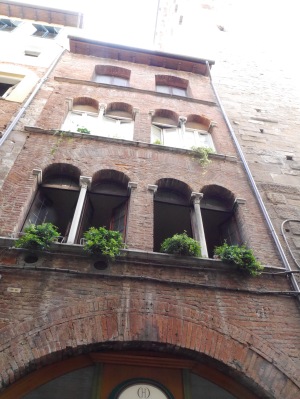 Lunch was at a fattore … apt as we will all be very fat … antipasta, pasta, meat and chips and then biscuits dunked in sweet wine for pud … accompanied by 4 types of wine,  The wine and the olive oil produced here.  A quick tour of the vines and an explanation about cold pressing the olives. 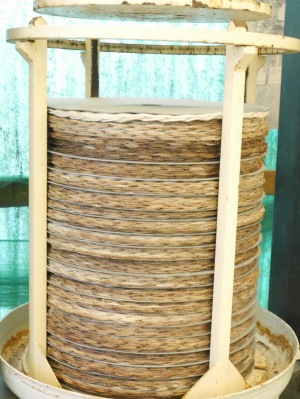 Typical olive press. The olives are ground up pastes onto the ‘plates’ and then pressed. Nowadays the olives go to the collective large press in the town.

Four course lunch with four wines 🙂 And we did leave unfinished bottles on the table!

We then drove to Villa Torrigiani – the building dates back to the 1500s and is intact.  The original frescos on the ceilings were cleaned in 1920, but look freshly painted.

Statues … on the front of the Villa! 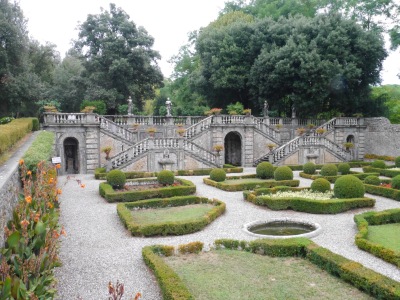 After such a full on day, most took a nanny nap before supper.