K ran around the lake; J just giving his calf another day to make sure no twinge.  Again, another lovely place to run. 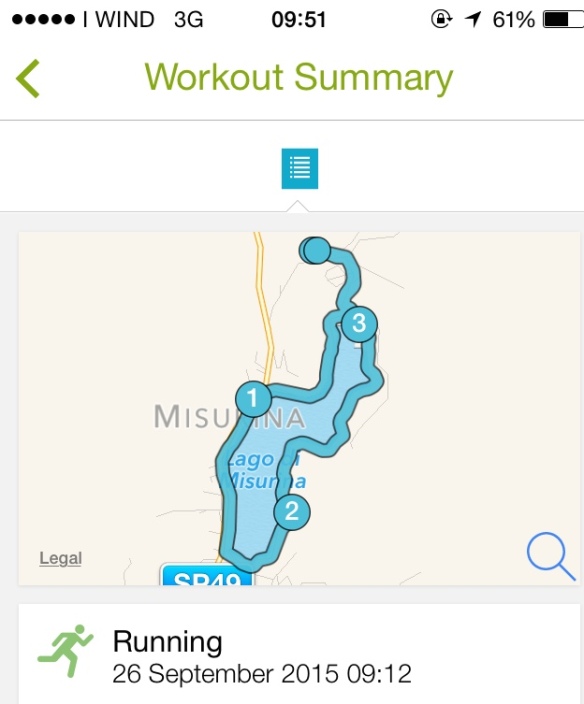 Can’t beat running around a lake 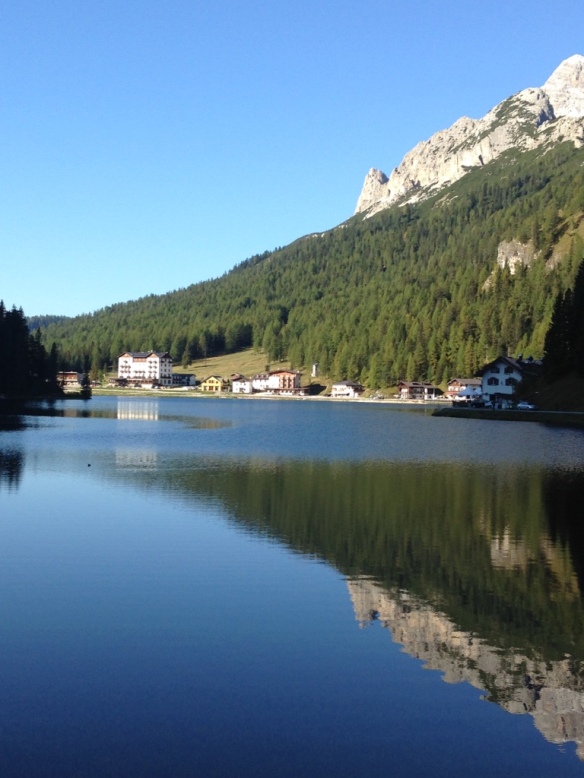 We had decided last night to stay put for two nights to max the area … we had thought about driving back across Cortina to the 5 Torri, but a lack of sostas / parking that side of Cortina made it all seem a bit like hard work.  We were running short of wine; I know in Italy … Piss Poor Planning!!  So we started the day with a walk around the lake.  In reverse for K, so it seemed more unfamiliar!  Found a Spar with EXPENSIVE wine, so just bought one bottle.  J, ever polite, attempted 3 Buon Girno’s and each time the staff ignored him – in fact they were inattentive and rude.   After all the Slovinian charm we have experienced, J (really, normally is politeness itself) was move to say “Grazie nice people.” 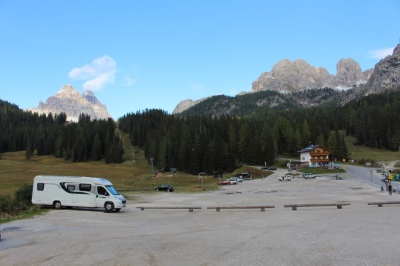 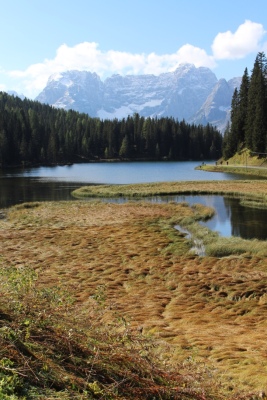 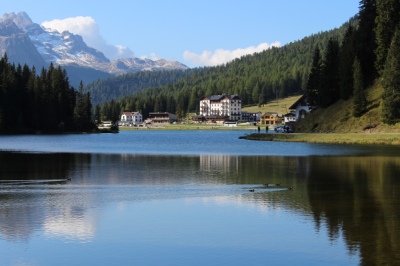 Homemade leek, potato and blue cheese soup and then we bought tickets for the Jeep ride up to Monte Piana.  It is an ex-military road and you can only get to the top by Jeep.  As we ascended it was very apparent why.  Narrow.  Tarmac falling away.  Hairpins.  Various gasps on the journey:  K awed as the scenery unfolded.  J as he shut eyes, clenched buttocks and hoped he did not drop a Dolomite!

20 minute walk to the 360 views of the mountains.  Simply stunning.  Then walk onto several crosses and memorials to the fallen Italian and Austrians on this front of WW1.  14,000 soldiers died up here:  some to the battles but a most due to a snow storm.  We saw many, many trenches in the rocks, gun emplacements and barbed wire … so much evidence of the war not in a clinical museum environment .  We walked along part of the Italian line and crossed the Austrian … so close.  Such a beautiful place and tinged with such woeful echoes.

Dad, this was another ‘pinch me moment’

Jeep ride back down, saw J sliding across the bench seat away from the sheer cliffs, much to the amusement of our driver and the Austrians we shared with.  K slightly flattered as she was told her German very good – seriously!!! (I think Europeans sadly are impressed when any UK person can speak another language) and the driver even tested her French, and then as we left, he said ‘Caoi Bella”.

BBQ and the Tre Cime BIG walk tomorrow.  Heating on … September only … but it is snowy!!!! 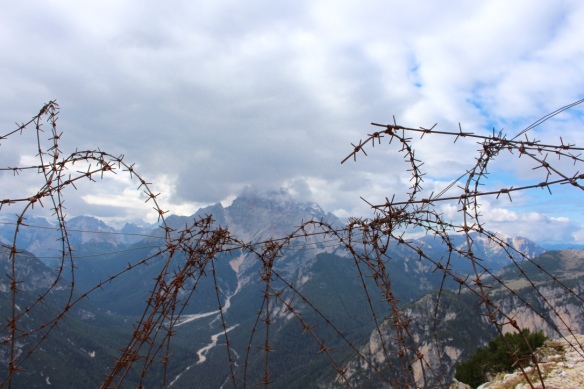 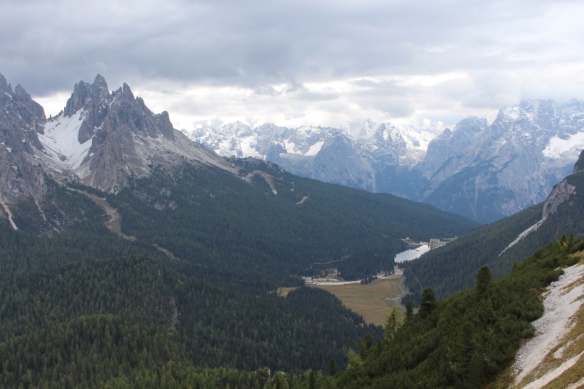 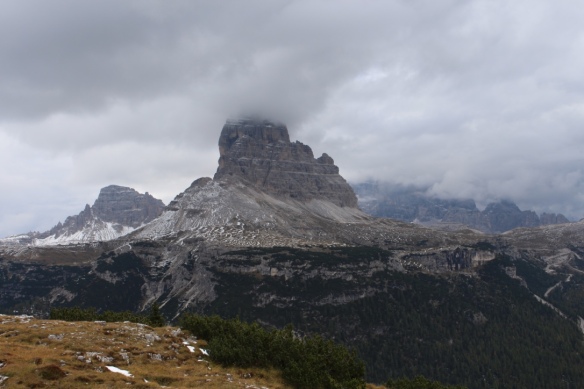 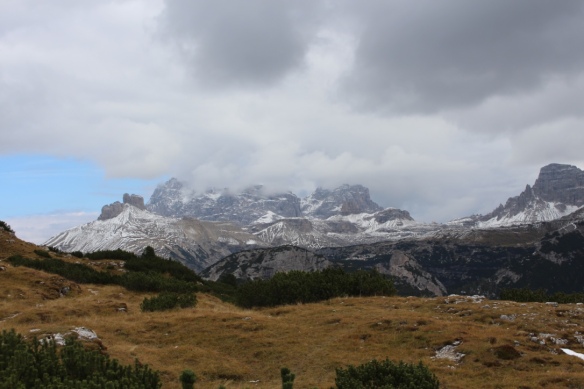 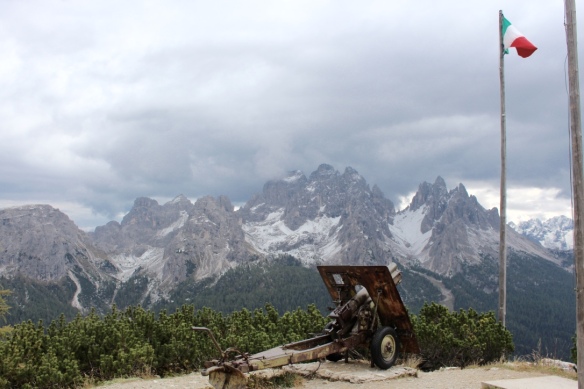 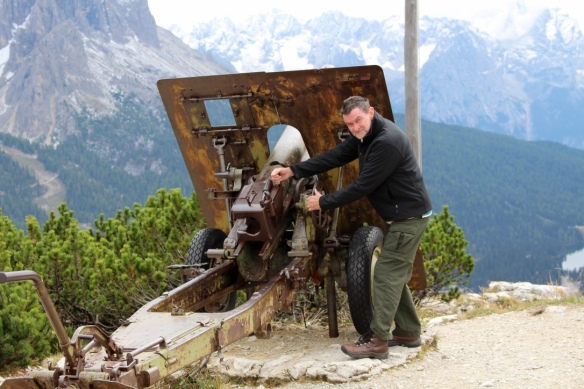 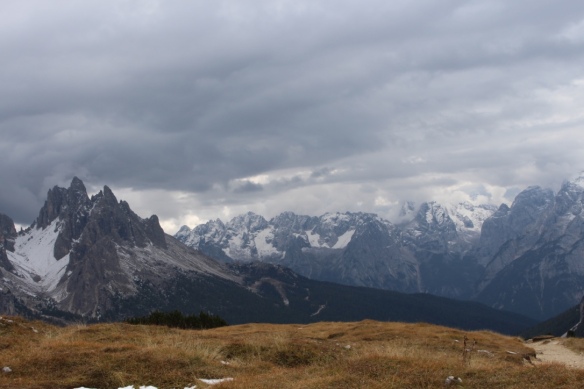 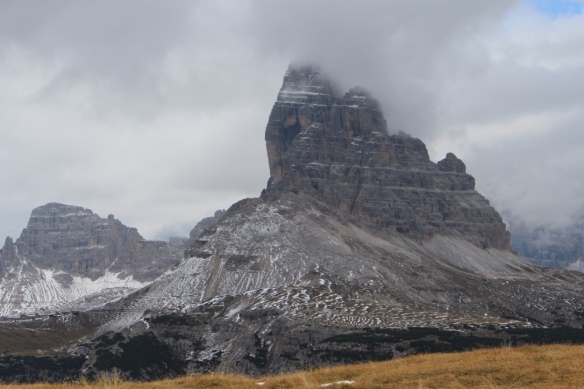 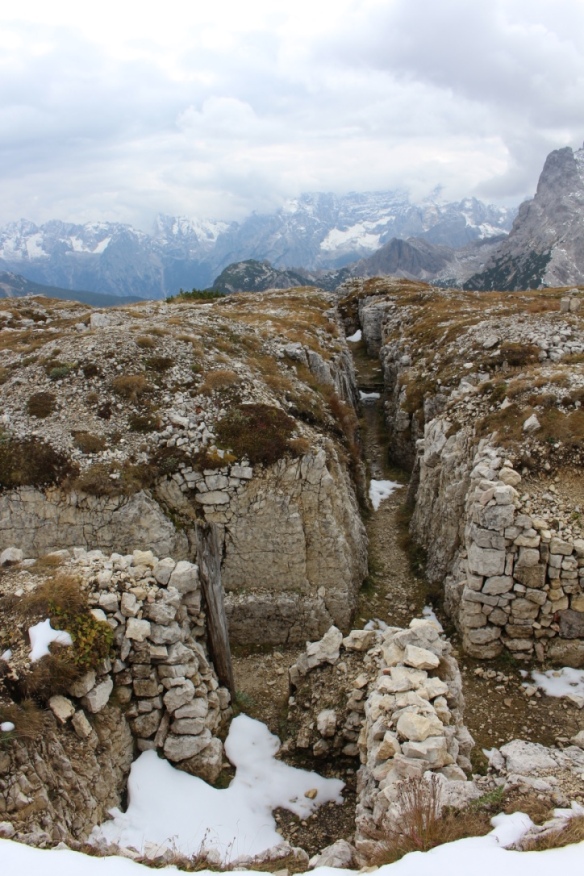 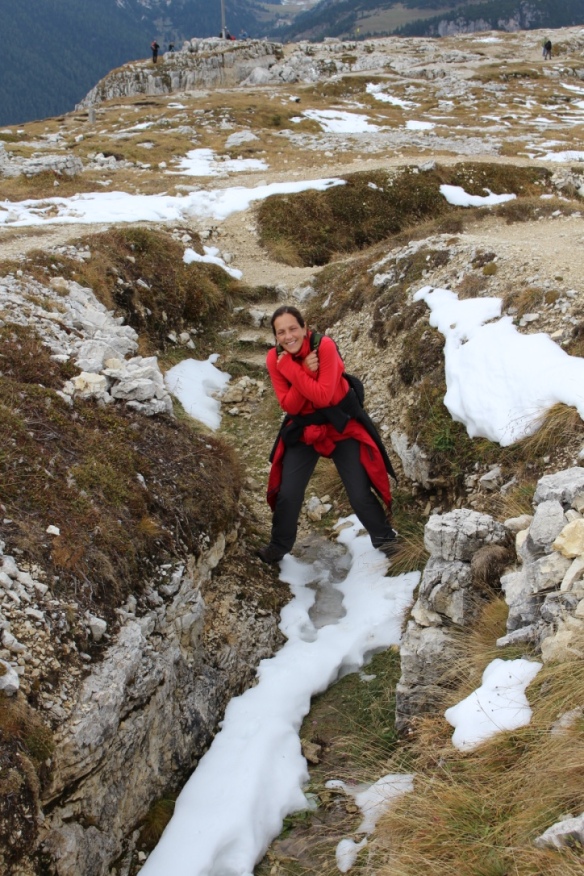 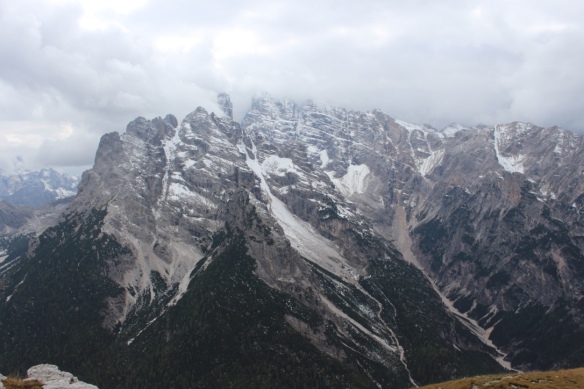 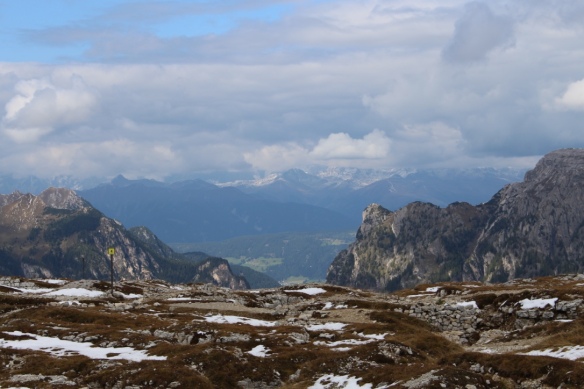 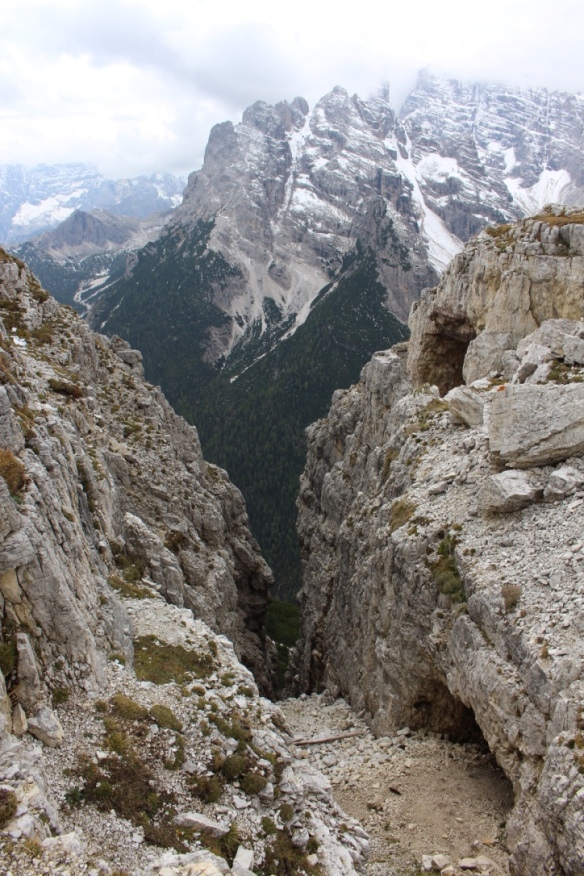 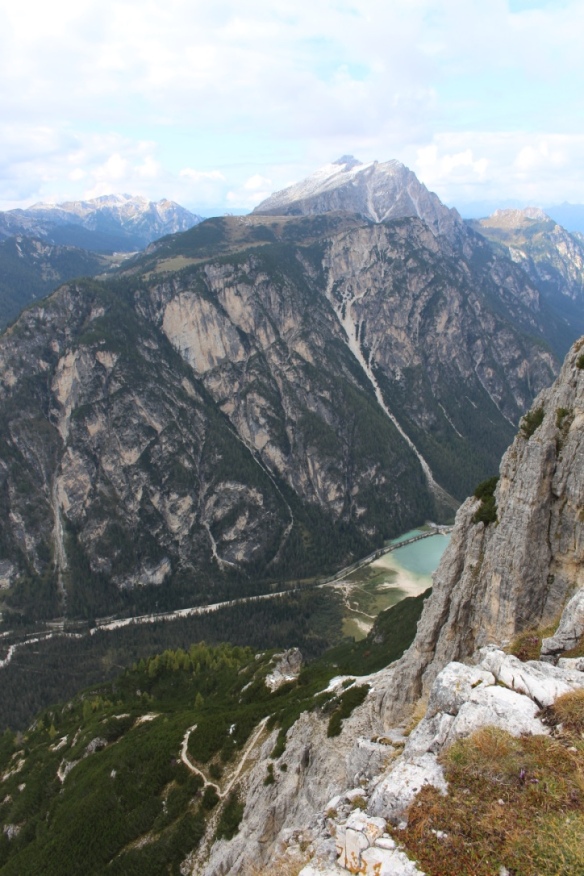 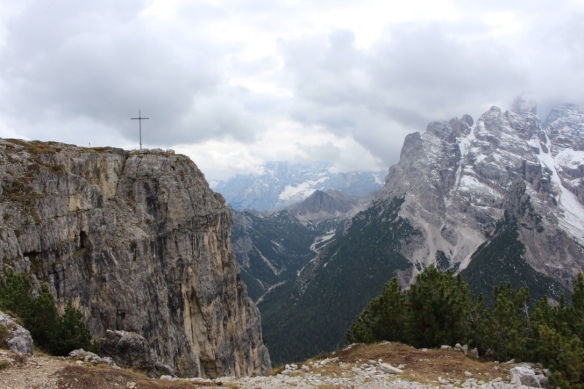 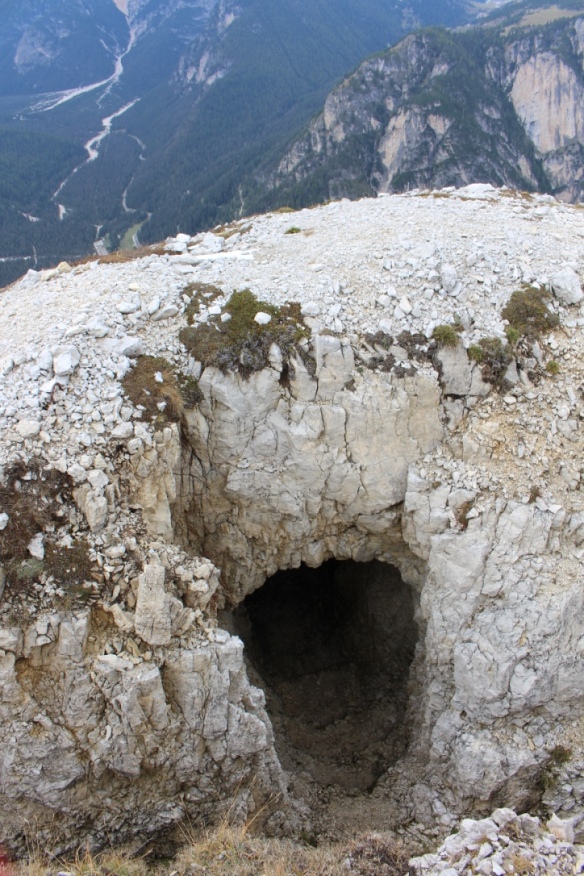 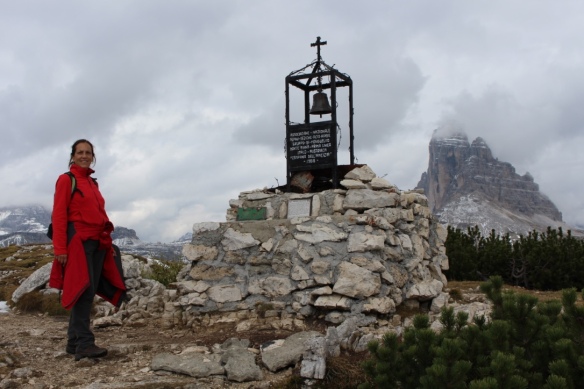 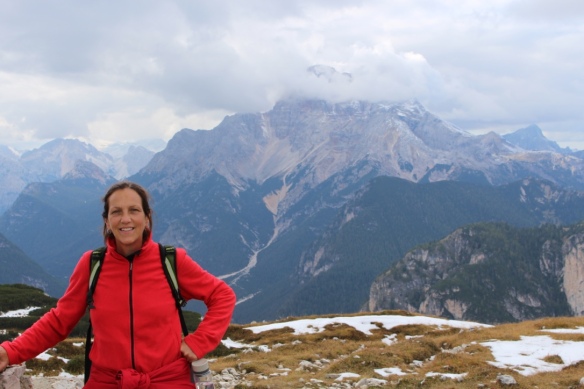 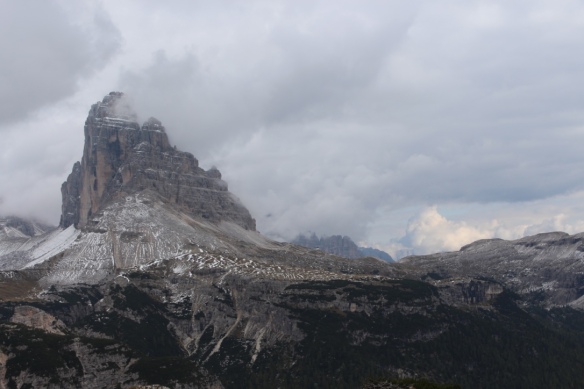 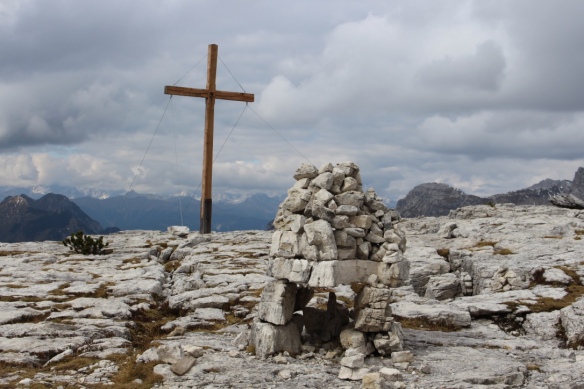 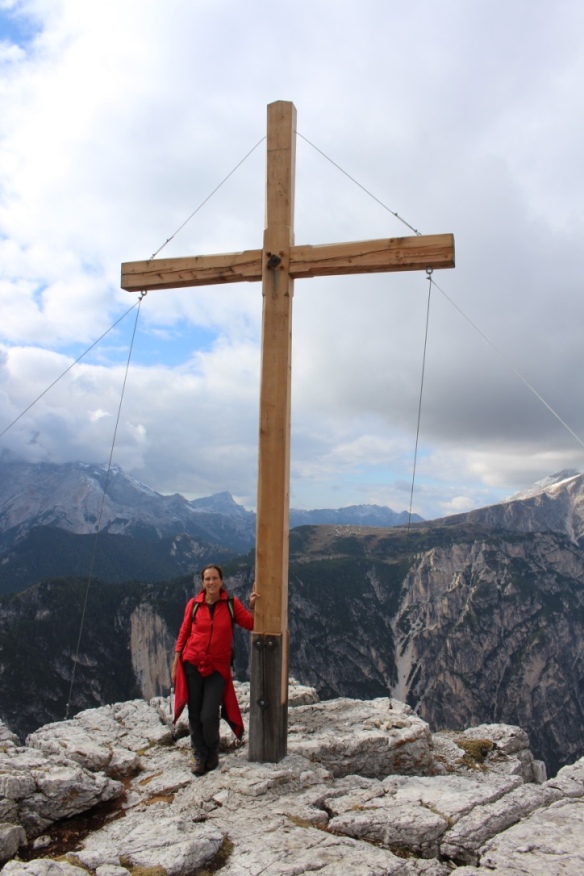