A postscript – about our infrequent motorway trips (saving the toll fees).  I (J here) noticed young ladies sitting on the hard shoulders dressed in black with short skirts – some even brought their own chairs!  K explained that these ladies belong to the oldest profession in the world…  Not for us to judge – but as long as they are healthy and don’t pay a huge part of their income to pimps – who is going to throw the first stone at them?

Pompei…  Now after spending 9 years in Jordan, I have a natural ‘brand’ loyalty to Jerash – having been there dozens of times – the 4 S’s will well remember….   Pompei is vast!  It is hugely impressive and a true wonder of the ancient world. Unfortunately, the individual set numbers are not synchronised with the site maps. But on the last Sunday of the month it was free entry!  We enjoyed it and learned a lot – definitely well worth a visit though !  The photos speak for themselves… 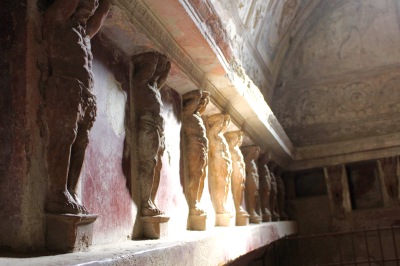 In the baths: It seems to take many Hercules to holdup the roof!

Vesuvius in the background. 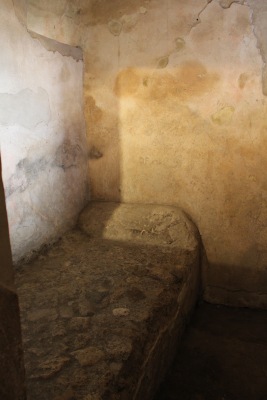 In the brothel, the working girls had stone single (!) beds, must be something to do with permitted positions?!? They were paid the equivalent of two medium glasses of wine and all of it went to the pimp.

House of the Mysteries, by far the best preserved wall paintings in Pompei

In the brothel, images depicting sexual positions … suggestions for clients? 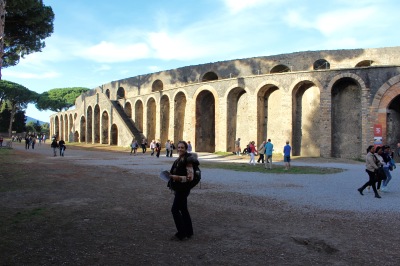 My navigational skills are legendary – the Ordinance Survey Office might give me a junior job in the Latrine Department! Toilet jokes anyone? Thomas O’Reilly as a young tot (yes, he was a tot once!) – announced to his family and a posh dinner party (Amelia only did posh dinners – she even invited me!) – “Ma – I’m going to do me wees !!!”   Sorry, Thomas!

OK – we got off at the wrong train station en route to Sorrento – I blame a certain young lady close to my heart…  The bruises will heal, the doctors told me – amazing what a well aimed handbag can do to your ears! Thanks, K!  (K here:  I was otherwise engaged and texting or I would have clocked it was not Sorrento proper! And no handbag – it was a ruck sack!)   Nothing daunted, we caught the next train to the real Sorrento. 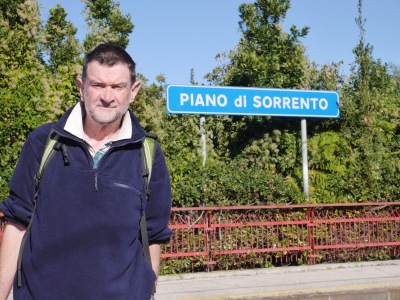 Oops, alighted at the wrong Sorrento!

From Sorrento to Positano there was standing room only on the bus, So we sat … on the mid exit steps. Consequently we had a limited view of the coast line.

A bus ride to Positano.  Walked downhill in the general direction of Positano Road – or was it the Vico Road?  I just received my P45 from the Ordnance Survey Office – now I can join Fianna Fail!  Positano came into view – and guess what? – a coffee stop!  What an amazing view to die for…  We phoned my big sister – and described the view…

We got off the bus above Positano and walked down. Glorious views. Glorious sun. Glorious happy. 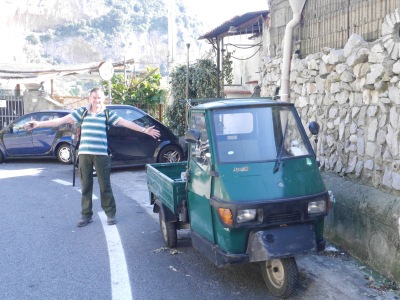 Perhaps when we can no longer walk or cycle, we could tow one of these. 14 year old boys are allowed to drive them here. Few do – not cool. 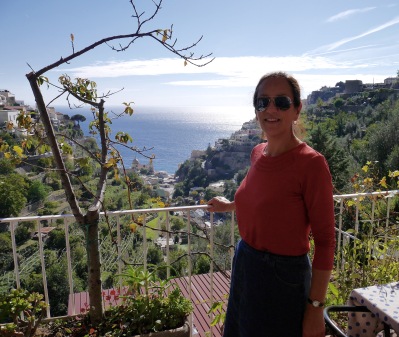 A superb view down to Positano from our coffee break stop. Amelia – we spoke to you from here as we basked in the heat of the sun.

The buildings literally cling to the rocky coastline

Finally made it to the town – lunch on the beach (K kindly didn’t publish the photo of me showing my rather large belly! 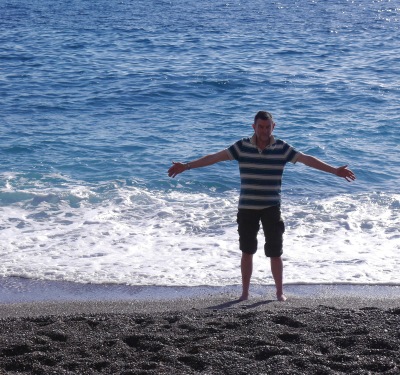 Yep, he got his toes wet. Said it was warm.

Tired from his paddling, having a rest after lunch. 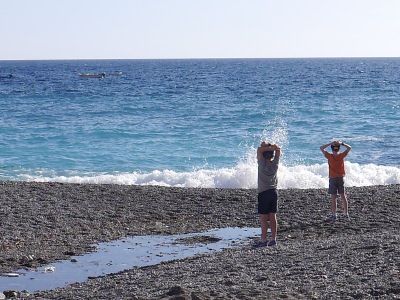 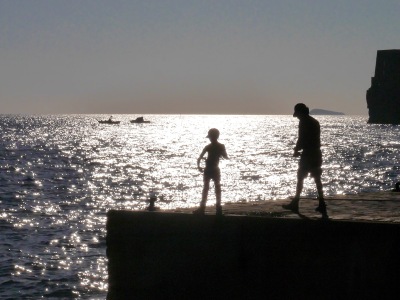 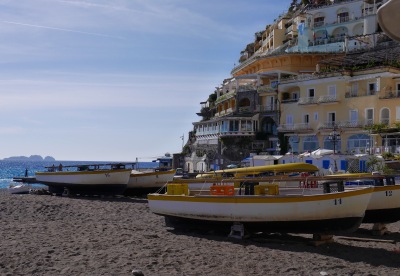 Met a lovely young Canadian couple for a chat.  Spontaneous decision – boat to Amalfi – no buses – and the Frigate Hogwash set sail – on an azure ocean. Did youze know – the Irish Navy is unique – all the sailors get to home for their tea every night !  Barked, sorry disembarked (a sort of discrete doggie bark!)   Glass of vino rosso – it’s a real posh place – we thought about buying a corner of someone’s back garden – but we will stay with Chardonnay….  1.5 hours bus trip back to Sorrent – dark now and 30 minute train to Pompei Scavi – our home  station….  Zzzzzzs… 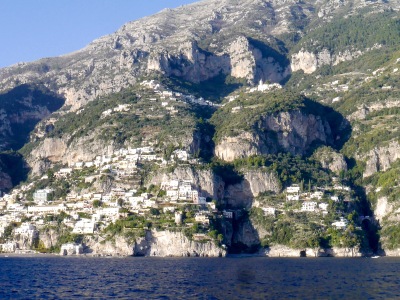 Typical view of the Amalfi Coast from a boat

Pugwash ahoy. We were trying to remember the name of the program with Master Bates and Seaman Stains and it has just come to me. My Master and Commander – at sea! 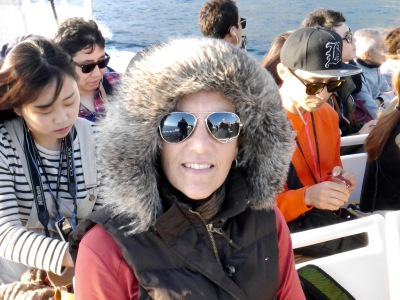 Nanook of the North.  Thank you Maddy for the cast off gillet … I am now wearing my daughter’s hand me downs!

We ran 4 kms at dawn – well, dawn-ish – K pushing me not just out of bed – but all the way along our sprint! Now sprinting is a relative term – we sprint in a respectable Olympic-esque conversational speed…

Which of you has climbed up to an almost live volcano?  Boiling lava at 300 degrees Centigrade – or is that Lemonade ?  Well, we perambulated around a volcano that last boiled a kettle in 1944 – we did see some steam… Indiana Jones – eat your hat!  It’s impressive and must be seen – but 1.5 hours is quite enough. 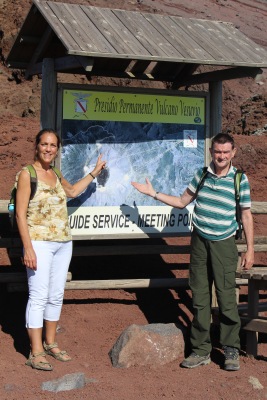 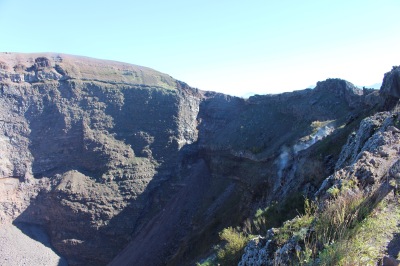 Expensive way to see a big rocky hole (EUR20 each for bus and entry to the park), but you can just see some steam / smoke on the right. 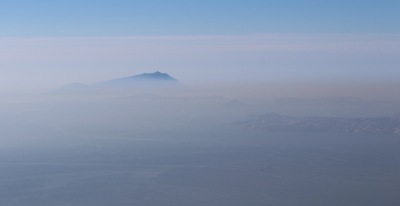 Herculaneum – smaller than it’s big sister Pompei by a factor of 50?  Compact, petite – spectacularly well preserved – having lain under 16 metres of mud for 1700 years – try putting your average semi under 50 feet of mud – and then dig it out by hand after a couple of Millennium!  It is amazing – we both agree we preferred it to Pompei – absolutely no disrespect to Pompei at all…

K comment:  The eruption was 79AD and many of the buildings were built 1or 2 BC …. just amazing to walk around towns over 2000 years ago.  So many artefacts were removed when excavation begun in 1748.  Many are in museums all over the world, especially Naples … shame… as it would be quite something to see some of what they found where they found it.

So many buildings have the upper stories and bright wall paintings 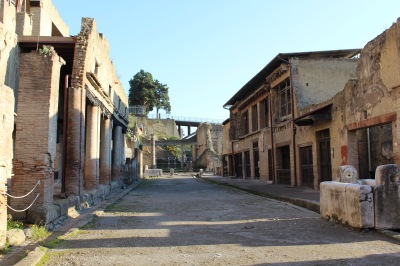 The streets really feel lived in

One of the female rooms in the baths. Wonderful mosaics intact.

Detailing survived. A cornice at the top of a door.

Covered by glass, this is a wooden ironing press in a laundry shop.

Herculaneum was by the sea, 400 metres of volcanic action moved the coast line. in 1982, lots of bodies were excavated from what was the beach and placed in arches that were the boat wharves. People had tried to escape the eruption by entering the sea.

Incredible mosaics, with a shell border. 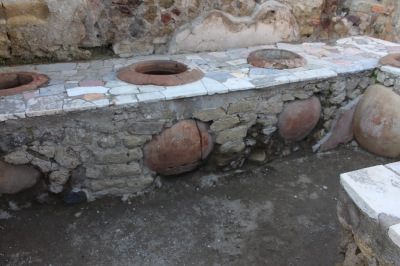 It was customary to buy lunch from a fast food outlet … eat there or takeaway! There were lots of the eateries and food and drink were served from these huge terracotta pots. 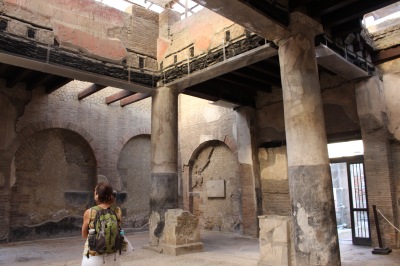 Afternoon saw us nicely fatigued – I napped and the gorgeous K kindly agreed to do the supermarket shopping in our local Carrefoure – a sort of superKat!

Napoli is on the horizon for tomorrow – we may see dawn again – what’s with this early bird routine? How many worms can we have for breakfast, dammit Janet!  Hands up those who have surreptitiously attended the Rocky Horror Show ?   I went dressed as an elderly Ordnance Survey Trolly Dolly – you can see lots of excitement from inside a tea trolly!