We ran along the deserted beach road – we may have seen one occupied house.  Truly a ghost town, other than the steadily busy bar/cafe next to us.  Where did the customers come from?

Having cleaned our muddy walking boots (the outcome of the wet and wild lake), I was then moved to polish all my shoes…

We decided to pootle along the coast and not travel too far, passing acre upon acre of Polytunnels. 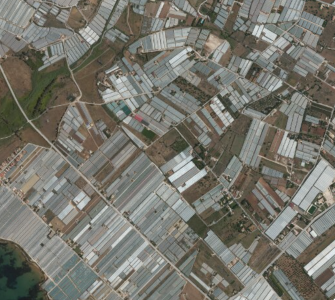 This is Maps view of the area – the blocks are the polytunnels.

We soon arrived at an Agritourism campsite in Punta Secco next to the sea by late lunchtime.  Juicy, the receptionist … yes really, is a wonderfully buxom young lady (sadly we suspect her name is spelt Guice) was incredibly warm and welcoming …. layering up against the cold and showing us our pitch options.  Since there were only 3 other motorhomes on the site and due to the Italian herd mentality, they could have passed the milk between windows, we had a lot of choice.  We opted for a solitary pitch facing the sea.  Juicy said we could always move if the the wind made us bounce too much!!!!    And with a sliding scale on prices … EUR14 for 1 night, EUR13 for 2 nights and EUR12 for 4 nights, although we only plan to stay one night.

James took this pic from a mound of sand by the sea … beautiful isolation.

K blending with a banana tree on the site.

We had a jobs afternoon:  cleaning, hoovering and washing … clothes and showering us 🙂  Lovely feeling – all clean 🙂 🙂 🙂  The farm owner walked around the site and gave each of us a bag of his new season tomatoes.  Nice ambiance … think we may stay two nights.

A run into the town, past the house that was used in the Inspector Montalbano series (not something we had watched, but people were out taking pix of it) and along the short lungomare.

When we later walked into the town … there really is not much here. And again, being out of season all the holiday home owners are 90% absent.  Even the little supermarket has gone on its annual holiday. We did, somehow, find a bar and imbibe a leisurely glass of wine as we watched the same cars and people drive / walk past the window doing circuits.

Inspector Montalbano’s house, which operates as a B&B in the summer. 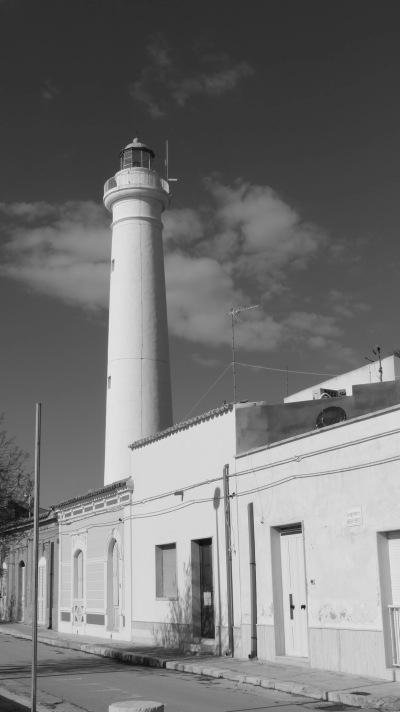 Relaxing … and the owner had told us that we could get a bus up to Ragusa tomorrow.  Oh joy … a hill town we don’t have to drive to and cause mayhem and gridlock in … as it happens, we would have been fine as there were several outside town large parkings.  Might stay another night here!

As we popped into the office to check where the bus stop was, we were offered a lift up by the owner, as he had business there.  When driving in Chardonnay we are sedate:  slow and cautious due to our size, the pot holes and land slides on the road, and right hand drive.  We are not used to driving in the middle of the road, at speed and the twitching to tuck in or pull out to overtake.  We had googled that it is illegal to use your mobile phone, but is is evidently not enforced.  J took the front seat and witnessed our driver on his phone, searching for something in his pocket, change gear, and then the hand go back to his pocket …. and he was obviously tempering his driving for us.  However, we arrived safely and were dropped at the bus stop.  He had kindly offered us a return lift, but we thought we might need longer so said we would take the bus.  The scenery changed on the way up from the poly tunnels to undulating fields with dry stone walls – mostly cattle.

Ragusa is one of the cleanest towns we have been in.  We quickly found the TIC and obtained a street map and a walking route.  Firstly the new town – new, but constructed after the 1693 earthquake in the Baroque style.

… a fine example of Baroque style … a lot of gold leaf and cherubs, but harmonious.

The Episcopal Palace … and I want that hat!

… it just won’t quite come free!

Down 340+ steps to Ragusa Ibla where the original town was created in 3BC.  After the earthquake the residents, mostly the old feudal nobles, refused to move to the new town and rebuilt in situ.  Again, lots of REALLY narrow streets, which are mostly pedestrianised, but every now and again a very small Fiat or moped would zip up and we flattened ourselves against walls…. and had a flash back to our ‘incident’ earlier in the week in the hill town.

Looking down and across to the ‘old’ town Ragusa Ibla. 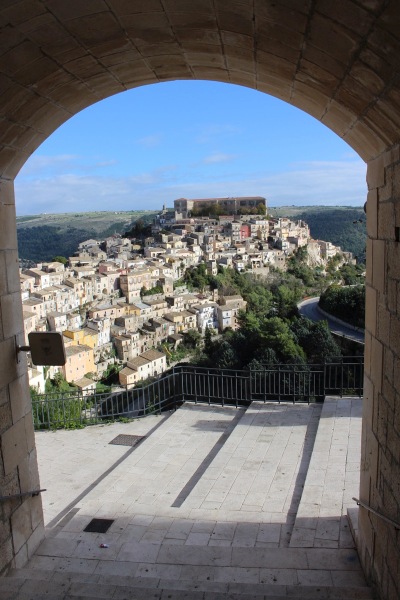 Know which REAL man I want to take home!

Great quirky statues around a bar … J did not emulate this one for good reasons! 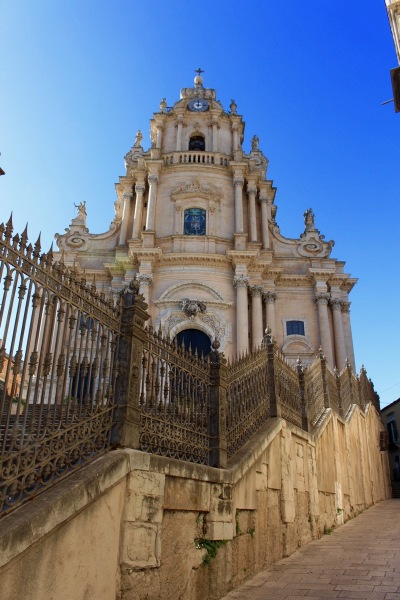 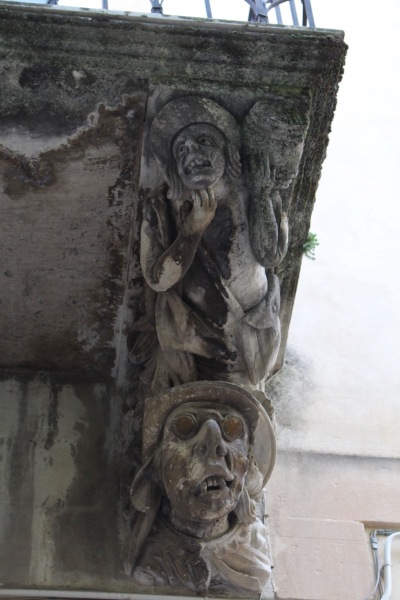 Lovely sunny day, even though the temperature was 4C lower than on the coast.  We thought a bottle of vino would go down well at lunchtime … but were put off by the stupid tourist prices they would have charged.  Sober, we had our non-alcoholic picnic at the gardens at the end, although we moved to a more public area as some ‘unsavouries’ plonked themselves a little too close.  And this was even after I had pulled out my cook’s knife to open my soup carton.  Not sure if they were more interested in the knife than J’s camera?

Not fancying the 340+ steps back up to the new town and then the walk to bus stop, we caught the local bus.  It was only when J tried to pay and was waved on, that I remembered that we should have bought tickets from the tobacconist – having been a little confused as I knew we could buy the Ragusa / Punta Secco tickets on the bus.  This is another reminder of the contradiction that is Sicily:  rules made to broken and not enforced at the unwitting tourist’s expense.  Having enjoyed the free ride, we splashed out on a coffee whist we waited for our bus back to Punta Secco.  Too late to move on, so another night here.

We were very conscious, since we will not be with family, Christmas could be a very damp squib.  I had posted on a couple of Motorhome forums that we could still be in Sicily for Christmas, was anyone around.  Dan had got in touch – he, and about 8-10 other Brits, would be on a site for Christmas … and wait for this … their site was only 3 miles from where we are currently.  A few emails later and after our run, we cycled over.  Really friendly people … we will try to book tomorrow for a week over Christmas.  And thanks Dan for the wind up … we have checked and the 5th gear problem is on old Fiats that had a poorly made 5th gear bolted onto the 4 gears … we have a newer version:  6 gears!  Although we had thought we would go to Modica today, we came back on site for lunch and jobs, such as oiling bike chains, emptying the toilet cassette, laundry and J repaired my foxtrot uncle non-repair (where I made the original problem 1000x worse) on two door handles!  OK, so we made 4 nights and got the 4 night discount 🙂

Despite best intentions, we overslept and it was 9.38 precisely when we awoke… too late for a run.  After breakfast and packing up we headed over to the Brit’s Campsite and have booked in for a week from the 20th December.  We had been told about a Decathlon sports shop in a retail park outside Ragusa.  Since it was on our route we stopped off and managed to buy a basket of ‘necessary’ items we really could not do with out.  We did manage to walk by the body boards, dinghies and tennis rackets :(.   An iper shop at the Iper-Coop, so we are now fully stocked for Kerstin’s visit, including hearty bread!  Kerstin arrive tomorrow for 4 days …. really looking forward to seeing her.  An easy drive to a light house point just north of Augusta, which included a short detour to prevent us getting wedged under a low bridge.