Text by James … who will K find next to do the write up?

The morning run started a bit late but we reached Acicastello – I did a bit of speedwork along the Promenade – I am quite determined to race in the next month….

Adieu to Aci Trezza and we journeyed south on the A18 motorway – heading back to Noto. On our previous visit with our guest writer Kerstin, we had met a German lady who lived part time in the area. She told us that 2 new priests would be ordained on Monday night and on Tuesday there would be a large procession and lots of celebrations – this seemed an excellent reason to return – not just to see the wonderful Baroque buildings and churches.

Driving smoothly down the A18 motorway – K at the helm – just approaching the turn off for Syracusa – there was an almighty bang beside us – a shower of wreckage and bits in the air – a car had a high speed impact against the central reservation fence of the opposite carriageway ! We stopped on the hard shoulder and k phoned the Police – a number of other drivers must have done so – the Polizia arrived quite quickly.  The accident car looked completely wrecked – we just hoped the occupants survived….  Our van suffered some scrapes and a small hole in the bonnet from flying shrapnel – if it had hit our windscreen – it would have shattered !  Nothing compared to the possible injuries to the accident victims….  We have come to learn that the driving culture in Sicily is inherently unsafe – because we are 28’ long and a large vehicle travelling slowly, we probably have some advantages (unless it’s a mountain town !).

The free overnight parking area (photo below) looked good and just on the fringe of the old/rebuilt post-1693 earthquake city.  To get to the heart of Noto – there were steps to climb – not too many thankfully and just 10 minutes from the Citta di Noto.  Recce’d (what horrible English, James – just as well it’s not your first language !) and retired to Chardonnay to get suited and booted for the ordinations at 5:30 pm.   Now then – the last such event I attended was 30+ years ago – but I recall it was just like a wedding – invited guests only. However, we already knew members of the public were ok to attend in Noto.  We arrived at the Cathedral at 5:15 (plenty of time, we thought) – to find it was already filled to capacity (standing room only) – a thousand folk ?  Eventually, we sat on the step of a side altar – which had quite a good view. 5:45-ish, the grand occasion kicked off – a hundred priests (!) processed through the Cathedral – K reckoned all the priests of Sicily were there.  The Bishop of Noto delivered a homily – it was theatrical – my Italian/Latin is good enough to identify much use of “pecatta mundi” – the sins of the world.  As a Catholic (not a regular churchgoer), I have had my fill of fire and brimstone in the 60’s.  But, the bishop calmed down and the celebration continued with lovely choir singing – and finally Giovanni and Paolo became ordained priests – to rapturous applause from the huge congregation !  After 2 and a half hours, we slipped away – a lovely warm family occasion – a first for K.

View to Acicastello on our morning run

View back to the Cyclopi Rocks at Aci Trezza

We took this going back up the motorway on Wednesday: you can see with what force the car hit the barrier, and the barriers here are seriously strong – they need to be.  Less than 1 km further up the road we saw a newly overturned car on the opposite carriageway.

Bishop’s looong sermon: it sounded full of brimstone and fire

We were awoken by 8 thunderous artillery rounds at 8:00 am – K was convinced that Mt Etna was erupting on our parking area – and she complains about my geographical prowess ! No signs of lava in the photo though…..

I had forgotten that 8th December is the feast of the Immaculate Conception – a most important occasion in the Catholic Church. K’s photos show the completely novel (to us) way of placing the floral garland on the statue of the Virgin – at midday outside the Church of St Francis of Assisi.  I even remembered the Latin words of the Angelus hymn – Amelia – can you sing it please ?

The main procession was scheduled for 5:30 pm and we managed a quick glass of wine at Paolo’s cafe near the Cathedral…. Paolo knew every man, woman and child who passed by en route to the procession… He also serves a good Marsala, K assures me…..

The photos excellently capture the spirit of the procession – it took 40 strong men in relays to carry the statue of the Virgin around town – including one uphill section !

Yet another warm family event – all ages out on the streets. We probably celebrated these feasts in Ireland in a similar fashion 50+ years ago – clearly, Italy has maintained traditions that go back many centuries…  It definitely gets the whole community involved – not a bad thing ?

Paolo’s cafe seemed to draw us in again – was that Marsala K ? (K: yes another two glasses and they were not sherry schooner sized!!!)

A lovely day – one of those magic moments that we are lucky enough to find.  Will K become a convert – and drag me off to church every Sunday ?  I don’t have the heart to tell her that altar wine is not Marsala !

Part of a nativity scene that filled a small room in a side street. 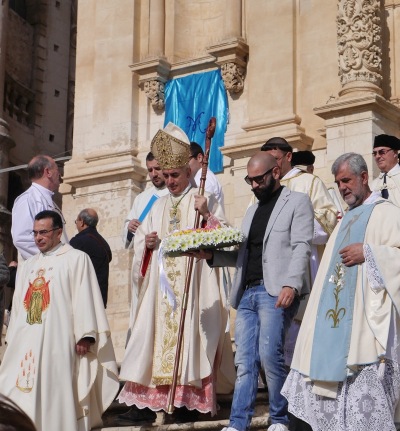 The Bishop emerges with the floral tribute to the Madonna … 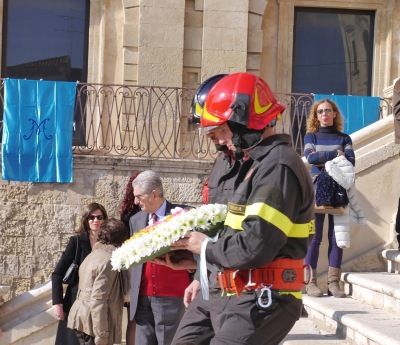 … who hands it over to the fire fighters? ….

Tied carefully in place.  And then a cacophony of canon fire.

Town officials … sporting white blouson jackets … some were filled by their bellies!

The band struck up and this cheeky chappie caught my eye.

Bishop and church dignitaries posing for the press.

We celebrated with a coffee and J had a Tiramsu (just for you Sylvie – he did not really want it! – forced himself, honest!!!)

Clerics and church orders descended from the Mass first …

The Madonna carried by a lot of burly priests and accompanied not by canon fire, but fireworks and showers of paper contain the words ‘W Madonna’

People and the band followed through the streets of Noto

Many watched on their balconies … this lady dressed to match her poinsettia plants.

We peeled off and returned to the bar, and about an hour later the nuns arrived, heading the procession

Once the Madonna was safely back at the church, there was a superb firework display 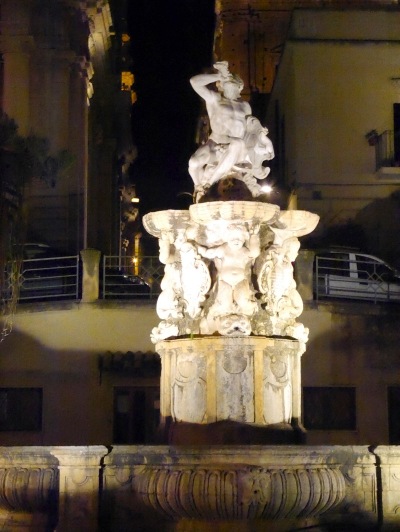 Minor dental treatment is required – not to sew up the outlet for the hot air – but a filling of sorts.  I visited a dental clinic in Noto but failed to get an appointment – K photo blogged while I pounded the cobbles and steps…..

Palermo beckons – for the second time – A18 again northbound this time. We passed the scene of the bad accident – the photo above speaks for itself. Later, a car on it’s roof on the carriageway – these motorways are not busy – what is it ? Speed seems to be the problem everywhere…..  Rush hour in the streets of Palermo en route to our overnight stay – the van fuel gauge suddenly indicated empty – somewhat adding to my driving stress levels….  a quick fuel fill and onwards.  K navigating by Google maps (Brad sidelined) – I managed to overshoot the gate of the parking area – K had to guide me reversing (the van, not K reversing) in the dark and rain and traffic, successfully…..

Well done to my Munchkin:

a) massive hair chop and donated it to Little Princess Trust

b) all selected Universities have offered her a place … she just needs to do enough work to get into the one she really wants … Kent Uni.