I still struggle with typing 2016!

A peaceful night; little wind and just the noise of the sea.  K motivated (J encouraged!!!) to run 4km along the lungomare and J did a brisk walk at almost the same pace to test his calf muscle!

After breakfast we drove to Marsala – the home of marsala wine.  We visited the town for lunch with the Aged P’s some weeks ago and planned to come back.  The motorhome services at the free car park had evidently not been in use for some time … full of rubbish.  There had been some gypsy children here on our last visit and J spotted a load down a alley way nearby and later we saw them washing clothes … we decided we would not overnight here.  So our tasting plans became a single tasting!  It was however, much enjoyed and came with the biscotti for dunking 🙂

A little Fascist construction on the way out of Marsala – not in keeping with fine wines!

We are parked up at the free carpark for the ferry to the Island of Mozia.  The boat seems to only run in the mornings, so we enjoyed the views and the afternoon sun.

The drive to the Mozia ferry was littered with fishing boats and large enclosed squares of salt pans.  Really pretty.

J captured the sun set … it was stunning across the water

The free car park at the ferry to Mozia, where we planned to stay.

Unfortunately, by 6:00 pm-ish, we had become somewhat uneasy about some youths we had noticed earlier – lurking – and one had cycled past our car park many times…. as we were the only occupants, we decided to leave. Our rule is simple – if either one of us feels uneasy about the overnight location – we move. It has only happened 3 times in 9 months – not a bad average. We drove back to Marsala to a previous car park – but there were lots of gypsies camped and hanging around – all possibly very innocent – but motorhomers driving very expensive rigs do get nervous – apart from the possibility of personal safety, these vans are our homes…  now South along the SS115 (one of our favourite roads) towards Mazara del Vallo – and a blog advertised parking. On arrival, it was fine – very large in the port area – we parked next to another van – some gypsy caravans away on the far side of the car parking area. Relief at being settled for the night – glass of wine – and thanks to K for all the driving.

A quiet night – some fishing trawler noise, not much – but the bin lorries started at 4-5:00 am !!! I thought briefly of rushing outside – to tell them – “this is Sicily – you don’t empty bins !”  Sorry, Sicily – but sadly, it is true – mostly. It doesn’t detract from a wonderful country with amazing people.

No running in the am, but brekkie, etc relatively early on the quayside – and MV Chardonnay set sail north – back to Mozia….we motored (again) through various ribbon towns including “Casabianca” – yes Humphrey Bogart and ingrid Bergman should have been there in Rick’s Bar….. It does contain “The Good Fish” fish shop though – maybe we will visit sometime…meanwhile, on to the Mozia island…

Boat tickets bought – no discounts for us mature gentlemen – 5 minutes at sea in the good ship “Jessica” – and landed at the erstwhile (1900s) country residence of Joseph Whittaker – the English anthropological gentleman who started the archaeological digs. That was way too many “…logical” spellings for my brain !  He was inspired – and the result is a exposed Phoenician city which lay on the great trade routes to Italy, Africa and further afield. All this – a civilisation 2,800 years ago when western Europe was how developed ?  The museum is very good – but the truly stunning centrepiece is “The Young Man of Mozia” – see photos.  Maybe the pics don’t do justice to this sculpture – which has toured the world – the detail is phenomenal – a real gem. One mile circuit of the island – many impressive remains of the city…..well worth a visit. 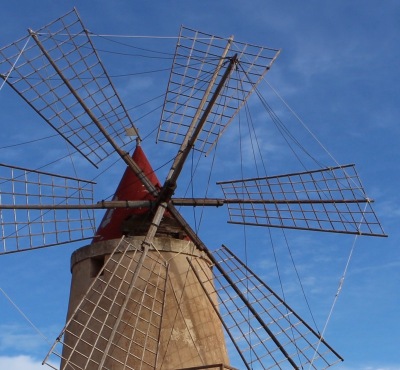 The windmills are prevalent and drained the salt pans.  A few are still working.

The channel to Mozia

The chiffon draped over the youth’s muscular form was amazing. Worth the island visit just for this. 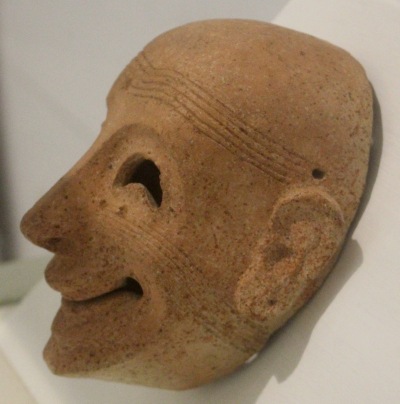 A terracotta Punic head … something or other big time BC 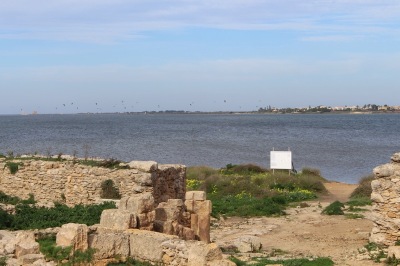 A now submerged causeway joins the island with the mainland.  The dots on the horizon are a shite of Kite Surfers (sorry could not think of another word to describe a group of kite surfers!).

Trapani beckoned – the first potential overnight area just didn’t seem to exist (it happens !) – where to ? – the port – always a good location. It was/is and we settled…. to jobs including my imitation of a vacuum cleaner – no, I don’t lie on the carpet nasally ingesting dust – that would save energy though – I use our Black and Decker – thanks again Diane and Grahame.  We had left a gap of some feet between us and the next door neighbours van – a reasonable space, we thought…  Two other sizeable motorhomes arrived and managed to compress themselves into the gap !!!  It’s called ‘Squeejy vans” – we may invent a new game….