A reliable straight out and back run this morning in between downpours.  We did not hurry as we were only travelling 9km to Alberobello – the main town with a concentration of Trulli houses.  We passed many more nestling on the road.

We had hoped to free camp, but the area I had identified from someone else’s blog was now proper car parking and payable.  A helpful policeman, with some English, saw James as he went to read the car park sign, looking for information, and directed us to the fee paying Sosta.  It is EUR18 a night but full services.  So we have had a full service and a shower.  And although strictly no ‘camping activity’ allowed, I have done some washing (a good time to do it when we know where the next water fill is coming from and we can heat the water using electricity rather than our gas) and it is now all hanging off the bike rack.  As it is dark we are hoping that the warden will not notice!

We met an English family for a brief chat … they have sold their house and are travelling with two small primary age children and a dog for a year.  Amazingly brave, but what a great experience for the kids.  We then lunched in the van … I had made a pasta sauce from an Italian Cookery School’s cook book (Tuscany Aug 2015 for an afternoon) … essentially onion, leek and peppers …. cooked till soft and then liquidised …. who would have thought that only 3 ingredients would make such a creamy and tasty sauce.

Alberobella is the main centre with 1500 Truilli houses densely packed in an UNESCO Heritage site.  They are made in C14 from local limestone blocks and without mortar (well originally, anyway).  It is thought that they were dismantled when the tax man came calling … and resurrected when he went.  Many are stilled used as residences, although a lot are for hire as holiday homes.  Even in February there are a lot of gift shops open.  All selling exactly the same memorabilia and some with the lure of a free panorama from the rooftop!  We found the Belvedere on one side which gave us a brilliant and un-hassled view over to one side of the valley and some of the houses.  Having spent about an hour wandering the streets, and paid for an expensive coffee, we felt we had ‘done’ Alberobella – definitely worth seeing, but not enough to keep our interest longer.  Must be horrendous here in the summer.

Apparently the symbols painted on the roofs are supposed to magical … touristy more like!

From the viewpoint … lots of Hobbit houses.

My own Hobbit … not persuaded to invest in this real estate!

A lot of the Truilli are restaurants and gift shops … all selling what is Truilli Tat.

We contemplated going to see the Grotte de Castellana tomorrow, but I picked up some information in the TIC and you have to book by phone in February and it is expensive … EUR15 each to do the full tour.  Whilst these are the longest series of caves in Italy, we saw what are reported to be the best caves in Europe in Posthna, Slovenia.  We’ll pass.

A good run, but again not to plan … it became an out and back.  K even managed a little pilates as we were secure on the sosta (parking).  We picked the English couples recommendations for Spain and Portugal locations as they had been and done this year.  By the time we’d done the services, it was getting on to lunchtime!  Ho hum … no meetings though, so it really doesn’t matter!

We arrived at Castel del Monte to an interesting parking experience.  A small carpark with an ‘official’  coach and car park attendant … well he had a badge anyway!  He attempted to get us to reverse into a normal car parking space which would have meant that half of Chardonnay would be sticking out into the road for all the cars and coaches to prang.  As driver, I refused!  There was a perfectly good spot next to two coaches, but no, I had to reverse perpendicular to them; the bikes hanging over the top of the wall …just!  Whilst I was using the onboard facilities, I heard a “No!” and similar panic noises.  Our skilled car park attendant had tried to get a newly arrived coach to reverse into our bonnet.  J told us that it was about 2” off hitting us.  It would have been one of those earth moving experiences, or how to explain to the insurance company where I was at the time of the crash!  We asked the the attendant if we could move to be parallel to the coaches … but no … he would watch our van.  We have no confidence in his eyes or skill!  He then produced a note book with ‘Please give me a tip for helping you park’ in multiple languages!  We duly tipped him EUR2 and he asked for another EUR2 if we wanted to sleep there … we coughed up!

The castle sits on a rise so is visible for miles around as this area is generally flat.  It was built in mid C13 for Emperor Frederick II, who was an intellectual.  It is thought that he used it as a hunting lodge.  But what makes this castle so unusual is it’s design.  It is 8 octagonal towers, interconnected around a central octagonal courtyard.  The theory is that an octagon represents the union of a circle and a square so the castle represents the union of man and God.  Marble still surrounds the doors and windows and there are long drop toilets, which only the Arabs used in their castles at this time.

Iconic shape of the castle.

Unusual red clay with pressed in bits of marble surrounding the doors and windows. 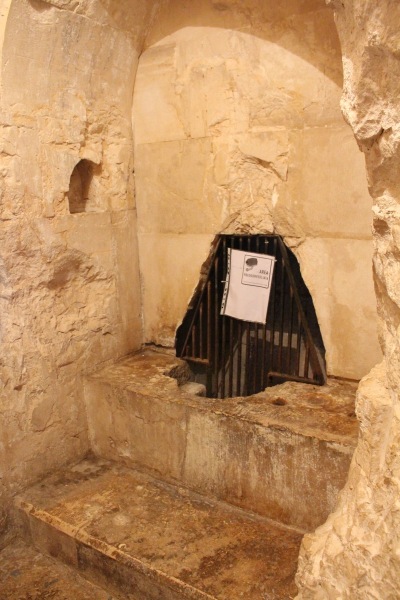 The first castle toilet in the non-Arab world.

As it did not take that long to view the two stories of 8 rooms, we decided not to stay the night in the car park … and No, we did not ask for a EUR2 refund from the car park attendant!  We headed off to Trani, on the coast.  I had done a quick check of the route through the town to get to the port, our destination …. but not all these checks are failsafe.  We had Brad, Madge and Google Maps (using our precious wifi data allowance), all going at once.  We still ended up in a small square faced with a VERY narrow street.  Panic set in!  Big time … there was NO obvious route out … at all!  Thank goodness for the kindness of the locals.  ‘Porto?”  ’Si”  “Diretto, a destra”  “Camper … possible?”  “Si … andiamo”.  So we ventured ahead … Yes, just do-able, but tight.  As we were about to spill out onto the dockside, we were met with a fish market and cars all wanting to turn across our bow!  But we made it.  Heaved a BIG sigh and headed off for a quick walk and a slow glass of wine .. or two.  Lovely wine, lovely barman (who recommended the lovely wine).

We both did epic 6km runs along the coast this morning … only the 2nd time K has ever run thus far … even got a lovely wave from our lovely barman of last night.  No pilates … too knackered!

There was a self appointed car park attendant … it seemed wise to wedge him up with EUR2 to watch Chardonnay when we went out.  We wandered the town, stopping for coffee and a slice of pizza and later an ice cream.  A really attractive town, centred around the harbour.  It was a major Jewish trading area.  Apparently the Emperor had granted the Jews certain commercial rights, including the silk trade in the area.  One original Synagogue was only reinstated in 2005.  Now the main trades are the fishing and tourism.  Last night’s market was tiddlers …sardines, anchovies, prawns and baby octopus … a lot still waggling their limbs.  This morning’s fish market had some bigger fish … spotted some swordfish as we ran past … if it is there tomorrow, I shall buy some.

The cathedral seems to rise majestically out of the sea as it is right by the water’s edge.

Looking down to Chardonnay and her neighbour. 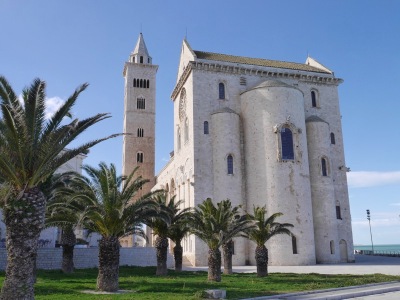 The Cathedral and Bell tower. 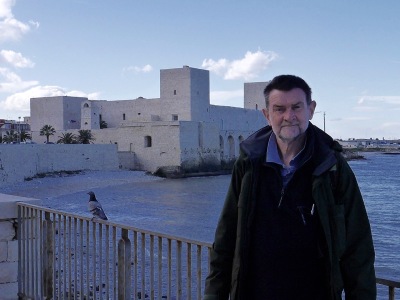 Elephants?  Was Hannibal here too? 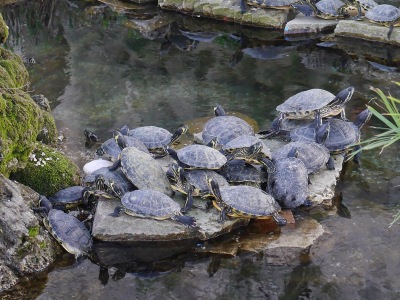 The town park alongside the coast was beautifully maintained … these small tortoise were all huddled on top of each other … we suspect the water was too cold for them. 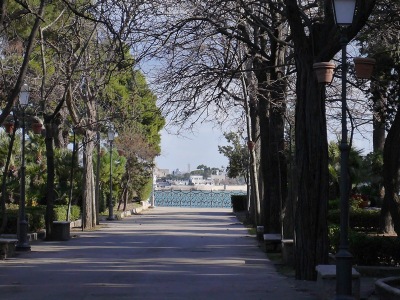 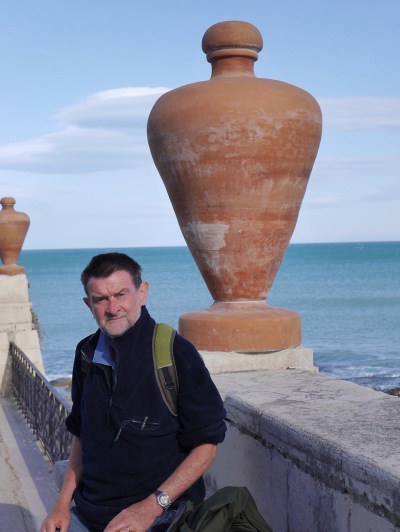 This man ‘urns’ my love!

Serious fishy business … unloading mostly anchovies … adding ice and loading onto the waiting refrigerated truck.  If only I knew how to cook them …