We did not journey far … just a little east to a lake in the Foret d’Orient.  Nothing much of a forest or the Orient but a free and quiet parking – heard the ducks on the water all night.   We had an easy day, doing a few jobs and short walk along part of the lake when the rain eased. 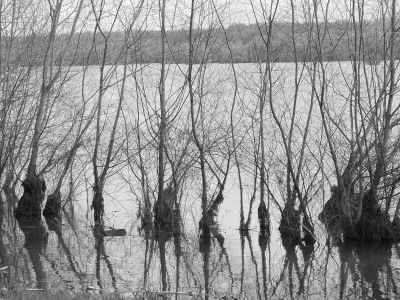 K ran along the lake and did some carpark Pilates.  J is resting his old friend (!) – his calf.  Another easy drive to the centre of Chalons which the guide book hyped up.  The heavens opened so K hyper shopped wine and cheese to bring back to Blighty in one of the biggest ever Carrefour.  When the rain eased we had a walk into town … nothing worth coming back for.  The cathedral was shut, but the C16 stain glass in one of the churches was rather special.

J quaffing a red … we’ve avoided the Champagne houses / cellar visits as pukka fizz is a little out of the travelling budget.  We’re more Prosecco kind of people now 🙂

Another short drive (K driver – had consumed another far too long and weak espresso, compared the the Italian version) to an amazing pitch.  A village with a huge (hectares) circle mound which surrounded Atilla’s fort. So large that crops were growing inside and K was looking forward to running around it … but sadly not to be ….

…. we woke to the sound of heavy rain and I am a fair weather runner.  Original plans of stopping and exploring Laon shelved and we decided to push on for our final French destination not to far from Calais and have a two nighter there and a chill down day.  And, guess what, the sun shone forth later afternoon for beer o’clock!

The campsite is so quiet the silence is almost audible.  Consequently we did not wake until gone 9.00 to the sound of one of the campsite ‘girls’ on the sit on mower.  This site is seriously immaculate – even the hedges around each pitch dare not shoot beyond their given precision trim.

We have been finding France altogether incredibly trim and organised after 6 months in Italy.   Signs everywhere quoting the law / rule number.  Lots of forsythia and spring blossoms.  Even the smallest of villages providing aires with services who cannot expect sufficient recompense to the local economy, and these largely are all clean and functioning.  Miles of rolling huge fields with early crops and oil seed rape.  So much food being produced.  Precision lines of tree planting.   Good roads … apology notices stating that holes are forming … where, we can’t see them?  Prices are a lot dearer, possibly 20-25% higher and sadly nearly all the fresh fruit and veg are imported … I know, if we had been a bit more static, we’d have found local markets.  However, we kinda miss the chaotic and unpredicatableness of Italy.  It’s almost too easy to be a motorhomer in France. 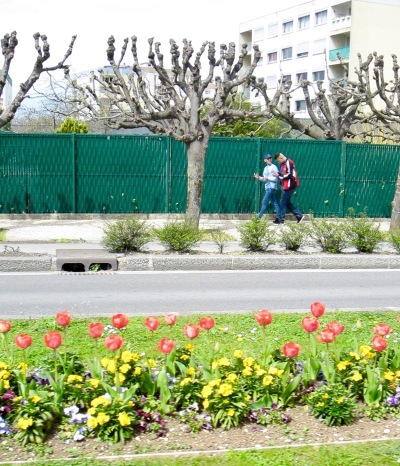 Tomorrow we cross over.  Our first night in Britain is with Ian and Jimmy in Rustington … we departed on the 20th April from here and it is only fitting that we return.  The next two weeks will be blog quiet … we are doing the boring but necessary maintenance on Chard (MOT, Habitation service etc) and on us (Dr, dentist, optician etc) BUT we will be seeing friends and family … quite a task cramming them in and we shall be exhausted, but we can’t wait to hug them all.  And all in two week window, before we set off again!

Amazingly it will be one year bar 5 days that we will have been away.  And my day numbering on the blog has worked!

We have seen and experienced so much  Made new friends.  We’ve been trying to name favourite places, worst moments (getting stuck in the Sicilian mountain village … incidentally we’ve won a prize for this story … a camper sat nav download … much needed!) and it so hard … so much has just been AMAZING.