We are in year 2 !!!  Just to recap – France, Holland, Scandinavia, Russia (briefly), Slovenia, Italy, Sicily (feels like a different country), France again – and (wait for it) Derbyshire!!!   But first – the M3 – the good old M3 has not changed much – apart from the fact that it is being transformed into a “Managed Motorway”. This means more lanes for more cars and trucks to get stuck in. I suppose it’s a form of management. Never mind that other (more) enlightened countries spend on public transport thus reducing the motorway traffic – whilst the UK becomes increasingly congested.

Anyway, we commenced our UK journey in Chardonnay by leaving the wonderful hospitality of K’s family – to head north into the English Spring…  M3, M25, M1 – not too bad considering it was just after the Bank Holiday. Lunch on board somewhere along the M1 – and then the blessed A-roads and a few B-roads – to arrive at the pre-booked Certificated Location at Old Brampton in Derbyshire where our Bristol neighbours Stephen and Kay had landed earlier, together with their gorgeous canines – Tazz and Gemma.  S and K are recent motorhomers in their van “Phoebe”.  Tea was consumed – and later, supper – with wine!  From the little we had seen thus far, the countryside of Derbyshire is really pretty – in that quintessentially English way – gently rolling hills and nice villages.

Note to selves:  avoid motorways as much as possible!  M3 – gotta love it … NOT!

Not quite the crack of dawn – but we headed of for an early run – around one of the reservoirs – a bit muddy and hilly but excellent to be away from vehicled traffic. 4-5 kilometres in all with K’s Pilates to follow – and a hearty breakfast.  Late morning saw us repeat the route walking with S and K and k9s.  A walk extension to the village pub.  Toiling up the last hill, we sought directions from a local walker – the pub had closed some time ago – and our maps were out of date! The nearest PH was some miles away, unfortunately….  Back to vans to rest – and later – supper – with wine? Yes. 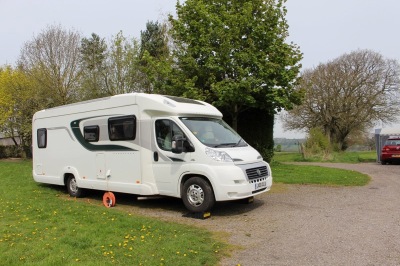 Our Certificated Location for 5 nights

Stephen and Kay with Taz and Gemma 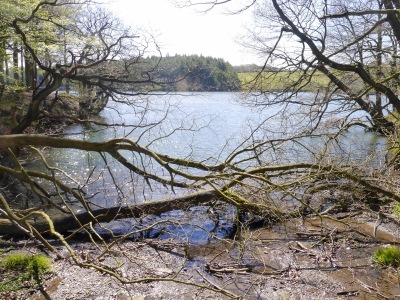 Is that a Morecambe and Wise moment?

A rest from walking – Stephen piloted us towards Chatsworth House and Park – home of the Lords Devonshire since the 16th century.  We took a guided tour of the gardens – entry to the house is rather expensive and the weather (in the English Spring) was beautifully sunny.  Our guide has a passion for the principal gardener who designed the verdant area – Joseph Paxton. Others including Capability Brown were involved but Paxton’s the man!  His glasshouses are stunning and the garden areas are quite diverse – see K’s photo of his ‘Convservative Wall’.  An excellent walk for all. 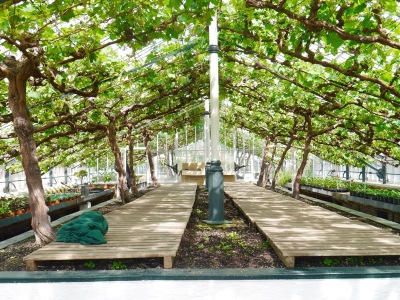 One gardener is employed full-time to look after the vine house. 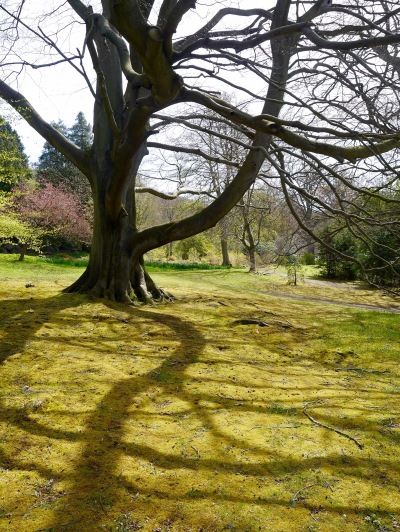 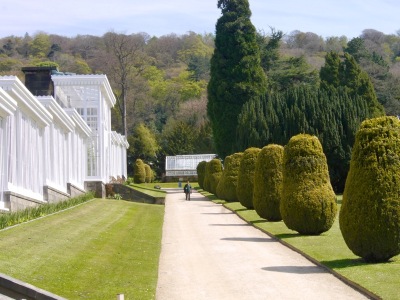 The Cascade built in 1696 to a French Design and fed by the waterfall above.

A tiny part of the huge rockery. 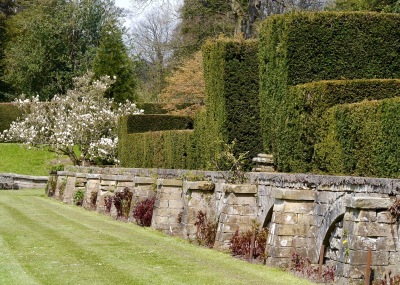 The maze in what was the Great Conservatory.  It fell into rack and ruin during the Great War so the family had it dismantled.

and every time so well performed

that when death spoiled each husbands billing

he left the widow every shilling

fond was the dame but not dejected

(Not my penmanship, but William Walpole…..)

That’s our Bess!  And Hardwick Hall is a fitting monument to the second richest lady in England in the 16th century.  The Old Hall (now ruined) was her birthplace – the nuptial bed performances were scattered across the country… and she produced 8 children!

Looking at the manor, the views across Derbyshire – there’s no doubting we were in Middle England – not a Labour voter within gunshot ! Except possibly for the man who engaged us profusely in anti-EU vituperations!  “Served it’s time – job done – out we go!” Just a brief summary. He also lectured Kay on training Border Collies – we think he narrowly avoided a punch in the EU!

The house Bess restored using the latest technology, but then she built the New Hall next door.  Ruins were popular, so half of this was pulled down! 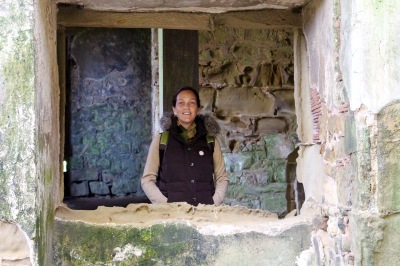 Gone to rack and ruin! 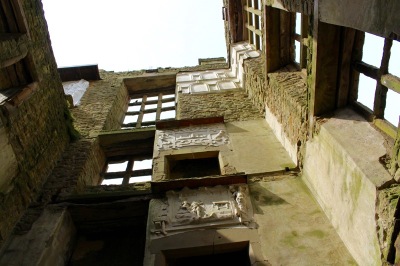 The most amazing interior – largely left Elizabethan.  As Bess had aspirations for her granddaughter to follow Elizabeth I as queen, the tapestries particularly were amazing.  This main hall had the most unusual 3d reliefs.

For some time – including in mainland Europe, I had been looking for a short road race to test me – and I suggested to K that she should take the plunge.  In Euroland, you need a doctor’s cert to demonstrate your fitness to run.  I can probably be certified for lots of things on the road, but…   Whilst resting in Old Brampton, I navigated the pages of “Runners World” magazine – and guess what I found? A 5km race in nearby Chesterfield on the coming Saturday!  A proper club event meaning some serious runners. We agreed to enter – my first race for 3 years and K’s first race ever!  For the days leading up to the event, a strict training regime ensued – a little running, some Pilates, lots of food and plenty of wine!  It’s important to be relaxed for these races…  My pace in recent running had been 8:30-9:00 minutes per mile – not exactly earth shattering. For the 5km, I set myself a soft target of 27:00 minutes – and a hard target of 25:00 mpm.  K sensibly had a target of not running out of steam. I had researched previous results (it’s a monthly event) and I thought I could finish about halfway in the field.  Like all finely-honed athletes, we slept badly in the nuptial bed and fretted about our performances (unlike Bess!).   Up and at ‘em in the early dawn, we satnaved into Chesterfield – found good long parking for the team bus and walked the short distance to the race HQ (cricket ground) to register.  Not surprisingly, we were the first to arrive!  Keen or what?  I couldn’t eat but K managed a yoghurt pre-race.  The route was 4 circuits of the park – thankfully, free from any motor traffic. I managed to go to the toilet only 7 times before the start.

The starter shouted “3-2-1 Go” – and off we went. I had no idea how fast my pace was as there were no km markers (K had her GPS app on her phone (with Michael Jackson through the earphones also for company).  I felt I was running a bit quick on the first lap and moderated my pace – K was steady all the way. One short hill at the back of the course – otherwise flat. It was good to be racing again – the adrenaline flowing.  On the 4th lap, some 400 metres from the finish, I accelerated and finished quickly – time 25:40 – close to my hard target – very pleased – K finished well and certainly not last as she thought previously.  36th place for me – of 63 was respectable and K was in 57th place – excellent for a first event!  Second in my age group – later I noted that the first placed man was a mere 11 seconds in front.  Both brekkied, we met S and K at the Chesterfield market.

Chesterfield is a nice town – with a crooked church spire. We browsed the markets and window shopped along all the usual High Street stores – noting the prominence of BHS which seems to be at some risk. Lunchtime found us in a Weatherspoons pub – 2 pints of lager and crisps – wine for K – the post-race effects fatigue was diminishing…..  A round of drinks for 4 people with crisps for 2 – £9.00!!!  Excellent Derbyshire value.

Saturday evening (our last for now with S and K) – Stephen piloted us to the nearest pub from our CL – the Royal Oak. We fell on the food – Scampi and chips, steak, liver and mash – and … wine!  The dogs as always were beautifully behaved.

It had been a lovely week in Derbyshire with S and K who would depart in the morning. We are so impressed with the area that we resolved to stay and explore more of the county! Another race might also be sought. 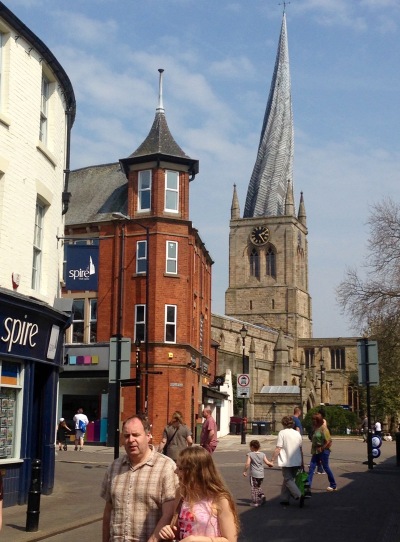