Doncaster in 2016 will now be famous for – giving Bristol Rugby half a leg up into the Premiership!  We met Tracey and John as arranged – and had a couple of beers before the game… the first half was inconsequential – but Brizzle opened up after half time and got clear by 15 points at the end.  These points will be carried forward to the second leg on Wednesday 25th in Bristol – we must find a pub to watch the return to top flight rugby – after 7 years of waiting…  But, many a slip betwixt cup and lips….

Before the game, we caught the 81/82 bus into the city centre.  The terminus was at the modern shopping centre; you could have been anywhere in the country!  Doncaster does not feature in any of the guidebooks, but google had revealed that there are some fine Georgian buildings, a Mansion House and a Museum.  The visit to the TIC revealed that they were all … shut today!  Ho hum.  There are the well renowned markets to see … but again, today mostly shut.  Obviously the RFU, Sky and Doncaster city did not liaise about what visitors might be able to see.

Doncaster has been the victim or poor urban planning, but the historic markets are renowned for their fresh foods … just not fully operational today.

The Minster was burned down in 1853 and rebuilt in gothic revival style. The architect was the prolofic George Gilbert Scott; amongst his works are Westminster Abbey and the Albert Memorial in Hyde Park.

The Edmund Schulze organ was installed in 1862.  I KNOW we’ve seen another Schulze somewhere, but can’t for the life of me remember where and can’t find it on the web either.

What a nerve racking first half.

Good parking near the Ladybower reservoir – and we set off with our silent bikes (we are missing the dragging hum of J’s rear brake that has followed us around Europe for a year … he’s not missing the extra effort of the constantly on brake though!)  – for an estimated 18-mile tour of the waters.  How can you have inclines, declines and reclines around flat water?  But, it was mostly flatclines to be fair.  An early stop for coffee and a cake – consumed, despite the attentions of the entire Mallard family!   Good easy cycling – and a lunch stop at the Slippery Stones – I managed a huge cheese and ham bap that was more like a cake!   Apparently they are called cobs up here.  Back at Chard, we calculated that our trip was more 20+ miles than 18 – good training…..

Lady bower was completed during WW2, despite materials scarcity as the need for water was great.  The three reservoirs supply most of Derbyshire and Sheffield.

The Derwent Rexevoir Dam, began in 2902.  Some was quarried in Grindleford and a specially built train line brought the stone up. 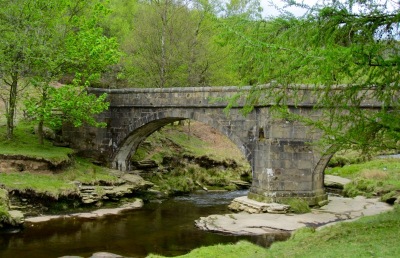 At the head of Howden Reservoir – Slippery Stones, our lunch spot.

Nowt so beautiful as nature.

That good old British (and Clune family) tradition of the Pub Lunch had to feature sometime this week…..a perambulation to Castleford – and the welcoming arms – of the first pub we encountered. Wine, crab cakes, soup and cheese board (a bit steep at £43 pounds) – set us up for the return leg – across gently rolling fields – see the convenient stone steps instead of a stile. Hope village – and rest…..  Casterton though has little to recommend it.  We were ‘nicely’ accosted by some students conducting a survey: “Did we feel that Castelton’s economy relied on Tourism?”  A resounding YES.

Clouds playing across the hills. 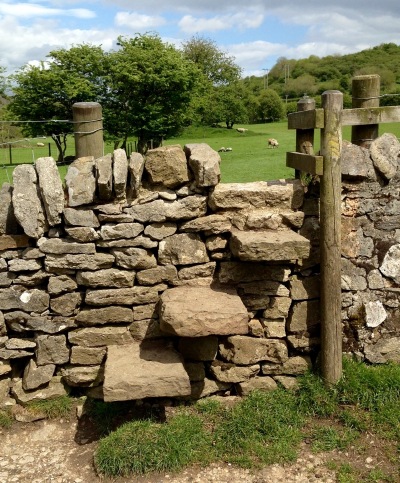 This tin hut is one of the few remaining workers’ huts of which there were thousands, used to house the workers on the Reservoirs we cycled round yesterday.

We have left the rolling hills of Derbyshire and entered Cheshire.  It seems very flat and more built up.  Well, it is close to Manchester.  We are here for two nights as Kerstin and her mother are flying out of Manchester on Monday, but coming to supper with us on our CL on Sunday evening.  Our CL seemed to be on the flight path into Manchester Airport…. but it does not bother the numerous rabbits that are grazing near us.  The CL had a short fixed hose, so we could not fill our 95ltr tank.  It also had recycling bins, but no general waste.  A fellow camper told us we had to sort everything …. GRR what to do with composite materials and things that don’t quite fit into Plastic, Glass, Paper, Card or food waste?  We did what we could and resolved to find a normal bin on the morrow.

Prior to greeting Kerstin and her Mum, we thought – why not Tatton Park?  National Trust – free to us via our Italian FAI membership – and parking with the coaches.  Although owned by the NT, it is run and financed by the local council, so we had to cough up £6.00 just to enter the hallowed grounds.  More coffee and ice cream awaiting the 1:00 pm house opening time. The house is nice but not spectacular – neoclassical style.  But the gardens are quite something – Mr Joseph Paxton’s influence again…

Minton masquerading as Sevres, with the family initials.  A lot of great porcelain on view. 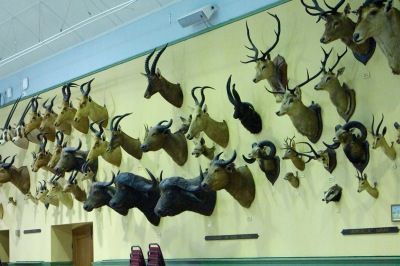 The last Baron had to build a massive hall to house all his hunting and collecting trips … animals like this right the way around the Tenants Hall. 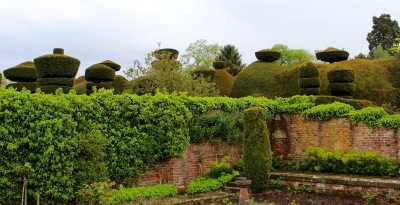 We preferred the gardens … wacky topiary.

Rhododendrons and Azaleas were amazing. 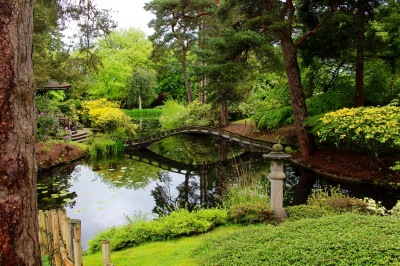 The Japanese Garden is considered one of the finest in the UK … but then it did actually have Japanese workers create it.

We had a lovely evening – with lots of stories from Scotland where Kerstin and her Mum had just been – and tales of our adventures.  They had been in Scotland in search of puffins.  The puffins had been absent, but we were able to inform them that we’d see hundreds, nay – thousands, nay – hundreds of thousands of them off the Northumberland coast near Seahouses.

We expected a nice museum with used engine bits and bobs……  What we saw – was a working mill!  Amazingly friendly staff – demonstrations of spinning and weaving taking you through from the cottagers to about 1920 machines.  Most of the machines were fully restored and about half were demonstrated for visitors today … a heating issue meant some were not running.  Really easy to see how the small children worked underneath the big machines cleaning the fallen materials and re-fixing broken threads … all in 5 seconds before the boom moved back again.  We saw the spot where one child had been crushed and were told of another who wrenched himself free, leaving behind his ear and half the skin on his face.  The workers suffered from the incredible noise of the machines, bone deformities from the constant crouching over them, throat cancer and bulbous eyes from the lint in the air.

Yet on a tour of the Apprentice house we were told they were well cared for by their kindly employer compared to other mills.  The first factory doctor ever was employed here, they had plenty of food and only two to a bed!  Punishments were never beatings, but having to work overtime, or in severe cases isolation.  The Gregg family believed that the healthy workforce should  also be educated.  The question is … were they cynically looking after the workforce to get more labour out of them or was it true philanthropy?  We did not see it but the Channel 4 series ‘The Mill’ is loosely based on characters from here.   The working water wheel was majestic.  This is one of the best museums we have seen anywhere!  Top marks to all involved.

After leaving here, we’ve headed back to Derbyshire.  We are on a site just south of Matlock and very near where we’ve cycled and walked before.

There is actually a Steeplejack up on the chimney.  The heating in the mill was off so some of the machines were not running … they only like it warm.  We know two other people, who are still in layers, coats and scarves … whilst so many people have gone to T-shirts.  Is it because we did not experience the really cold British winter? 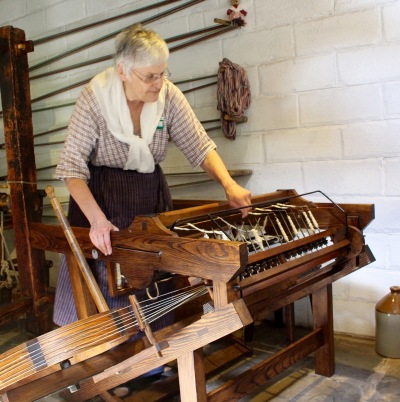 One of the multiple bobbin spinners … I think it was a spinning Jenny. 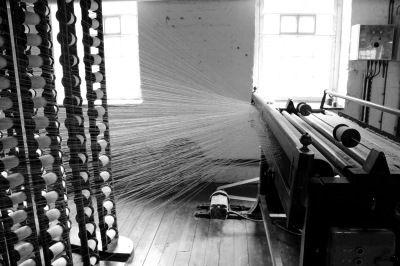 As you walked through the mill, the industrial revolution developed and some of the machines were just huge.

90 apprentices were indentured at any one time.  They arrived from Workhouses and were ‘enslaved’ / owned by the mill owner until they were 21.  This mantra was in the Apprentice House – my grandmother had this written into her school leaver’s book – guess it must have been from about 1920.  I’ve not seen it elsewhere and it really reminded me of Nanny.

1 thought on “376-381: Bristol Rugby, Exploring and National Trust in Cheshire.”