Can it get more beautiful than this? We say it every day – “This is the best place ever!”  Next day, what do we say? Exactly the same!!!

We parked up just up at the end of the road at Talmine Harbour for a headland walk.  The sun was shining and families were heading for the sheltered beach – hope their toes were clad in something solid as later on we spotted a lot of crab on the sea floor!

Our perambulations took us up, down, inclining, reclimbing – not declining – and “all over the shop”…  quite a steep descent to the safety of a road, just as the rain came down.  The weather here is hugely indecisive.  Photos don’t lie (wish they would, sometimes…) – we lunched like kings in our cave – we briefly thought of shedding our clothes and going back to caveman/woman mode!  But the kindly folk of Tongue might rush to join in!

Back to Chard – somno for moi(?).  Soup cooking for the haute chef, blogging and mapping…  Tomorrow to – Smoo Cave – for more caveperson frolics!

Our View!  Another stunner … well it was this morning before the rain set in!

Views of the Tongue Rabbit Islands. so called as Lord (Sutherland probably) introduced rabbits to the islands as a food source.

And so many wild flowers. 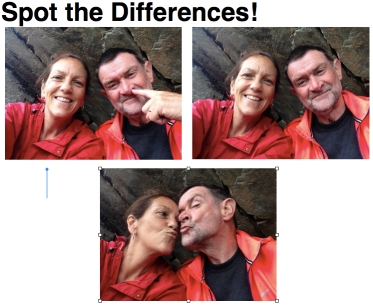 Our cave where we sheltered from the drizzle to eat lunch.

Looking back towards the harbour and our white dot of Chardonnay, top left. 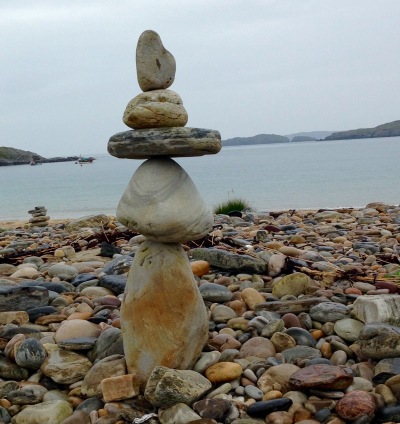 A clever balancing act – not our work!

A run and around Talmine bay.  We crept up on a couple of lady walkers and when K apologised for making them jump, one grabbed her hand with both of hers, to say not to worry – just another warm Scottish gesture.

Amazing scenery on the drive from the Kyle of Tongue and around Lock Eriboll.  WW2 personnel who were stationed here all year, called it Loch ‘Orrible due the  climate.  Absolutely stunning but little habitation.

Smoo caves – short self guided tour and on we go…  We liked the carpark – J went to buy fresh eggs from the neighbouring house’s box on the wall and came back with yummy ‘tablet’ (fudge to us English mortals).  He wittily said to a couple ‘Funny sort of chicken these, laying tablet’, but they were foreign and looked at him strangely! 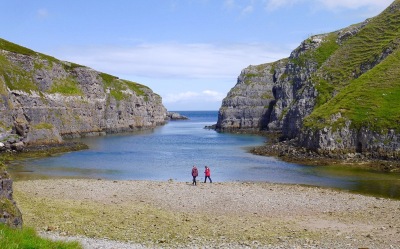 This part of the cave was formed by wave action.  The interior is a Karst cave (we learnt about these in Slovenia), where the water comes through limestone.

Just up the road was a Craft Village.  We were TOLD (recommended) by the lovely Shirley and Margaret, to try the hot chocolate!  K did – seriously the best ever!  So lunch today for K was not the usual soup and fruit, but fudge, choc tart and a hot chocolate!  Not a calorie in sight!  Message to Kay, the weight is NOT coming off; How you doing?

Healthy lunch (coffee and quiche) for the Oh so virtuous James …

…My delicious, sick making, lunch.  The pukka hot chocolate had melted white chocolate and milk chocolate drizzled over the top … I wore a lot of it!  But am still dreaming abut it!

We thought about heading to Scourie to a campsite, but the the rain was starting and we’d just passed Sango Sands campsite.  The wind was howling, but we bagged a pitch right on the edge of the cliff and overlooking the beach … double check the hand brake was on!  A gem of a site – a large capacity washing machine for £2 each and a drying room with a gale blowing through between the two doors.  K filled the drying room with sheets, 3 pairs of jeans and knickers strung up like birds on a telegraph line!   We carried on with our industry and cleaned the van top and bottom inside.  And then cleaned ourselves.  Before we knew it it was  knocking on 8.00 p.m.  How time passes when you’re having fun!   But seriously it feels so good to have cupboards full of clean clothes, Chard all sparkly and for us, freshly showered, to climb between clean sheets.  And we know that tomorrow we will use the campsite services and be fully emptied and charged – Good to go for another 6-7 days, before we have to fill our onboard water tank.

Running, nice slightly hilly course – J stopped to chat to a nice lady who was bent down worshipping the stones on the nearby wall?!?  He congratulated her on her piety – she said that this was the only place she could get a phone signal…!

K pilates’d until the rain came in again and we completed our services and carefully manoeuvred our way on to the road towards Lochinver, which is heading down the west coast. More stunning scenery.  We lunched at Scourie with a view of the campsite we had thought we’d use … looked nice enough but their washing machines would have been £4, not £2! 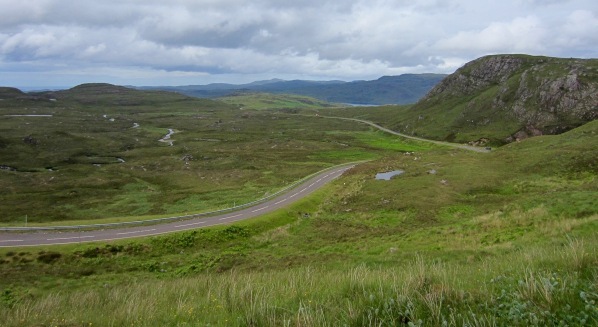 Just a sample of our route.

We had a quick walk and an ice cream at Lochinver.  The TIC was closing early – the lady staff was unwell – upset stomach, so we kept our distance!  We may pop back in tomorrow to pick up some walks info.

A short drive to Culag Woods, another recommendation by Shirley and Margaret.  The wood was developed 150 years ago to create work and men were paid 5 pennies per day … women only half of that!  We clambered initially down the “Are you brave enough” path to the White Shore and then criss crossed, re-crossed paths and explored.   Green moss, lichens and tendrils – K convinced the wood is magical.   The local primary school is next door and there is lots of evidence of their and the local community activities, but you have to be eagle eyed to spot some of their work …

Maddy and I used to make houses like this on our dog walks.

White shore, looking back to Lochinver. 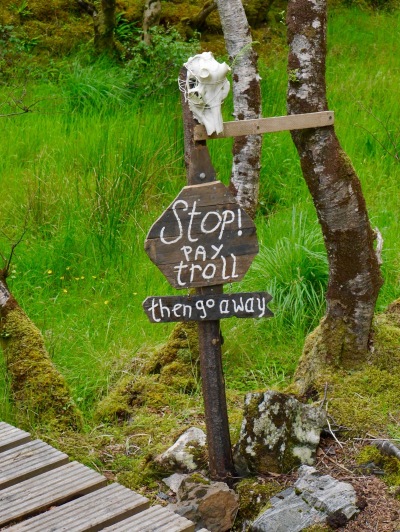 As well as these giant bugs, we saw a wishing tree, giant dragon flies and … 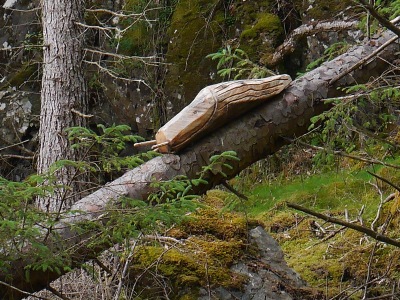 The ant hill looking mountain, Suilven, will NOT be our destination tomorrow!