We were just up in time to see Jimmy off to school.  He did his reading words with Ian and is spot on with some quite complex words such as forgiveness and trespassing, and he’s only 6!  We walked to the bank to transfer the balance for the new motorhome … J came out of the bank and stated that he did not want to think about such a large sum now out of his account, so he’s called it a ‘not small amount’.

We drove to Canterbury which has a European style motorhome aire at one of the Park and Rides … free busses, toilets and motorhome services, for £3 per day … marvellous!  Bus into the centre and a walk around the Christchurch Canterbury campus, only to discover that Maddy is on the new bit even closer to the centre.  We’d asked a number of students where the library was … interestingly most of them did NOT know!  We saw her deluxe room with double bed and en suite.  Then we wandered out for a bite to eat … Cafe Rouge … excellent quality and service.

Maddy has being using an app called Uber and called us a cheap taxi back as our bellies were too full to walk and the park & ride busses had ceased.  You don’t pay with cash but they deduct it from their account … thank you Munchkin! 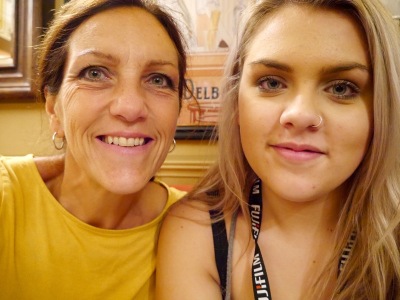 A slowish start and we met up with M, who has no lectures on Wednesdays … nor Mondays.  In fact not many lectures at all … 7 hours per week in total … and for £9K p.a. fees PLUS living costs PLUS accommodation.  The Aged P’s reminded me that I had as little as 11 hours one year!  They felt the same, as they had to fund me other than fees.

We started with brunch back at Cafe Rouge as last night’s dinner gave us one freebie breaky.  The TIC had supplied a map and info on Christopher Marlow … a niche interest of James.  He can tell you about Marlow’s career as writer, spy and street fighter, and quote various lines.  There is a theory that he was not killed in a brawl in a Deptford pub, but smuggled out of the country, where he continued to write most of what is know reputed to have be written by Shakespeare.  Canterbury is a lovely city to walk around – compact and most of the sights are within the old city walls.  we also managed to do a little shopping … second hand bookshops have a lure. 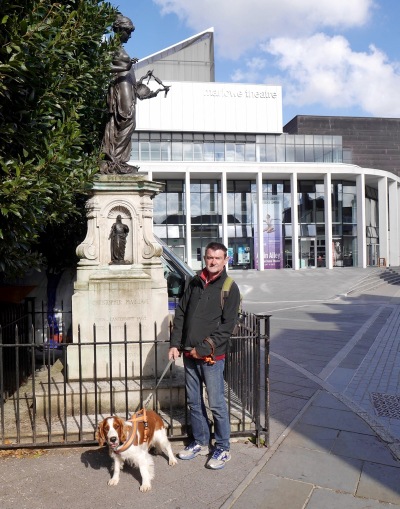 In front of the Marlow statue and theatre.

A liquid lunch … Maddy did Photography A level.

Yes, that is MY hat! 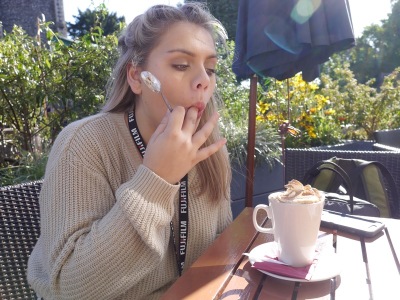 View of the Cathedral … we only got as far as the gate as it was £12 pp entry.  We’ve both been in before, in fact I was kissed by Runcie, the then Archbishop … I was only about 16. 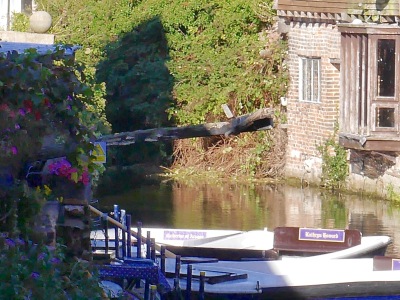 We searched to find the Witches Dunking Stool, which Mutt had told Maddy about … sadly this is all that is left of it; and this was a replica.

James caught the bus back and M and I hung out in her room and then went to see ‘Bridget Jones has a Baby’ … I’d seen it before but it is very funny … better than the second one certainly.  We supped in Prezzo and decided the food quality and charm of the staff was infinitely better at Cafe Rouge.  Maddy then Uber taxi’d me home.  J had had to stay in with Oscar (out motorhome neighbour had told us this morning that Oscar had been barking last night whilst we were out … we’ll have to build him up to a few hours home alone) and had dined royally on crackers and cream cheese!!

At night, we could get a little closer to the Cathedral.

J had lost his reading glasses in Rustington… think it must have been the stress of the ‘not small amount’ transaction, so it seemed to make sense for him to get an eye test and order glasses in Canterbury as we will be back next Weds to see Maddy and then again on 21st.  He tried two well known opticians who could not do an eye test for several days … an independent could see him in 45 mins.  J travelled in again on the free bus, whilst I walked Oscar and did some cleaning.  He rang to ask me to guess when he could pick up the glasses … next week?  Tomorrow?  No even better, in 20 mins.  He’d just happened on an optician with their own lab.  Most excellent result.

Having fully used the aire services, we set of for Hythe, which another motorhomer had said was really worth the visit.  It was – old quirky centre, a military canal running through and a church with a crypt full of bones (which was not open).  Of course, we had to stop for coffee and cake!  Opposite was a proper butcher, so I bought liver for supper and some oxtails … had a fancy to make oxtail soup … yummy.

We had to sit outside … Oscar I hope you appreciate our sacrifices!

We drove onto Dungeness to wild camp, which was quite something.  Think it is possibly one of the strangest places we’ve ever wild camped.  Low clapperboard fisher houses on the largest shingle bank in Europe, a Nuclear Power Station and two light houses.  It only needed tumble weed and it would have looked like the Wild West.

The old Light house by our parking. 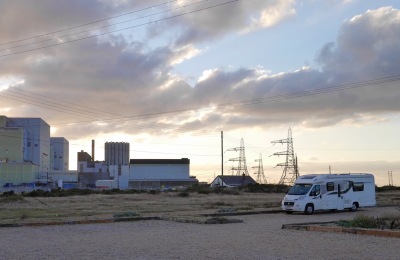 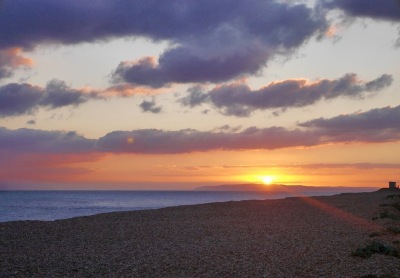 Oscar does not much care for walking on stones either … he really is ‘special’.

A few modern houses, but most seem to be cobbled together from bits of shed.

And some are made from railway carriages.

Two weeks today and we pick up our new van! Woohoo!

We collected some rather expensive snow chains from a chap near Hastings. Reckon we’ll possibly need them going over the Pyrenees and across the middle of Spain in November.  We saved £30 on postage and got a demo on fitting them.  Just need to get around on practicing how to fit them BEFORE we actually need them  We’ve bought two sets, as we read and were warned that the back end could slide out if going downhill on ice.

We found a wild camp in St Leanards … 4km walk along the front from Hastings.  J counted 12 motorhomes here, some look pretty permanent.  I later found out a massive Winnebago had been there for over a year. 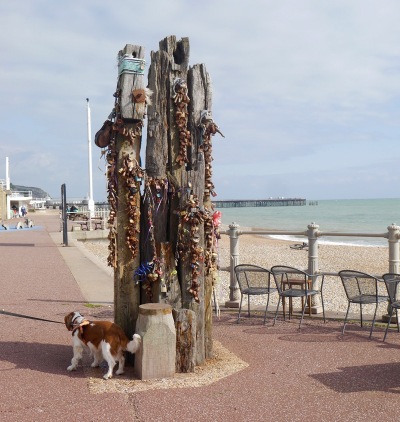 Oscar cannot tell the difference between a lamp post and an art installation!

The Pier was only reopened in Spring this year.  Huts in the style of fishing shacks and a modern cafe, juxtaposing with the rusty sub structure. 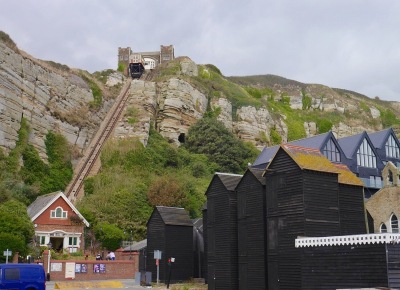 One of the cliff railways and net drying sheds; they were so tall as space was a premium and some even have cellars.

Supper was two huge Dover Sole that i’d bought on the way out of Dungeness … fantastic firm and tasty fish, but criminal, we had to throw some away as they were too big.

We’d planned to both get our butts into gear and start running again … but pitter patter, every so slightly on the roof.  J poked his head out to determine if it was enough of the wet stuff to stop our run and spotted … people gathering right next to us for a Park Run.  A free 5 km run along the promenade to Hastings.  Mr C was well excited and animated … just what he needed to get motivated.    He had 15 mins to change and limber up.  K did not partake in this enthusiasm and elected to take Oscar for a walk, having waved off James.  Given the lack of recent running J did really well … 54 out 130 and average 5.46 secs average per k’in ometre.

Oscar had been a little strange this morning.  He stays in his bed under the table until J gets up and takes him out and then he comes to my side of the end for a morning stroke … not this morning.  As I got ready to take him out, I discovered why … he’d chewed / eaten the straps of the bum bag where I keep poo bags and a bag with treats.  Of the webbing and the plastic … no trace.  I went to put on my very expensive Meindl walking shoes … he’d consumed the tongues on both.  A minor chew on one of J’s trainers.

Guilty as charged … not even a hangdog expression!

Given J’s exertions, we decided to have another wander of Hastings and buy some replacement shoes for me … £125 later … I think we’ve finally forgiven Oscar.  We caught the cliff railway and walked part the way along towards Fairlight … a hundred years ago, Mum as a girl used to visit and aunt here and walk these cliffs.  No pix sadly as my camera battery died and I’d not brought the spare.

Another fish purchase … A huge turbot, but this time I was ready … I only served half and will make something with the rest.  We also have two plaice in the freezer.  Lovely.