I crossed back to Blighty on the 15th.  Although I’ve done it before, I was still slightly nervous about Oscar’s pet passport being in order.  I checked and rechecked the vet’s entries comparing to the previous vet’s.  No issues at all and we sailed through the process quickly.

On returning and leaving England, it is normal tradition for us to stop over to see Ian, young Jimmy and Nicky’s parents in Rustington.  However, Ruth and Brian were in Brittany visiting their other daughter, Tracy, and Ian was up in town, so not this trip.  The up side was that I booked an extra night in the Brighton campsite and spent an extra evening with Maddy, who has just moved here.  I got to see her great 2 bed flat (she’s sharing with a good friend who is at Uni there) and to wander around and SPEND in Brighton.  The flat is walking distance from the centre, so we did not have far to carry a chalk board and mirror (which I promptly smashed), as well as M’s new pre-loved clothes and my new frock and costume jewellery.  If you’ve not been to Brighton, it is buzzing place.  Drug addicts, students and Barbour jackets all rub shoulders together … it is very real.  The break a mirror and bad luck happens adage happened … all electronic.  Th sat nav lost all its maps.  The sat pad (iPad with Co-Pilot) died altogether and wanted re-initialising and the radio died.  The first two have been resolved and the radio binned.

Before J joined me I moved between Farnham (close to parents and sister), Bristol for dentist, John Lewis and e bike shop and Shropshire to drop off Christmas presents at my brother’s.

James left Antibes on the 20th; his flight left 30 mins after his ex-wife landed … so Sarah really was not alone long should the baby have decided to make an appearance.  This is the longest by far we’ve ever been apart – 9 nights.  Boy, was it good to be back together.  However, little time to enjoy being together as more jobs to be done!  Including:

We managed to catch up with a few people, but really only a few people.  Stephen and Kay, our old next door neighbours cooked and always delicious.  Frances and Edward to belatedly celebrate E’s special birthday, which we missed as we were on baby watch in Antibes.  And I had a great Sunday afternoon with the girls – my old muckers, and Ian and Jimmy in Twickenham.  Just not enough time.

… whilst I froze and wo-manfully smiled whilst she ate!  I did nick a piece of bacon.

Moreton Corbet Castle, an extended castle and Elizabethan House which was owned by the same family who own Tim’s house … his is in slightly better nick!

And announcing the safe arrival of Cian Ash Weston on Sunday 24th September. 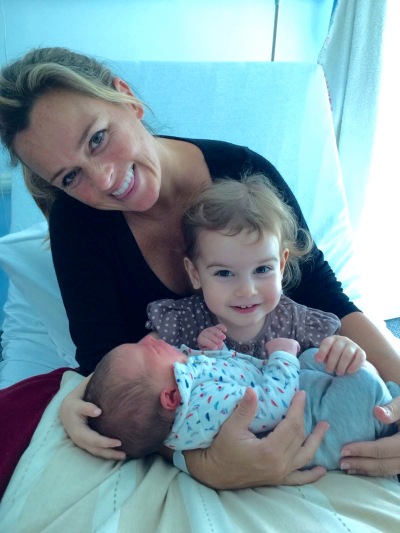