We arrived quite late to the aire at Cornas, so the designated 5 van spaces were taken – we parked separately not blocking anyone.  Grahame and Diane had suggested trying the local vino – but no!  Out of our price range…..  we walked young Oscar between the vines – and rested our bones…

Stayed at Dignes Les Bains – headed for Castellane but getting late and spotted an aire sign – not the one we’d stayed at before but closer to the town centre and along the river.  We walked along the river and it’s outdoor leisure complex of a boating lake, climbing wall etc.  One young lad was exercising his dog by being towed along on a skateboard – he then got the dog to dive into the lake off a pier …  the dog was suspended mid air for a nano second with all limbs out wide. 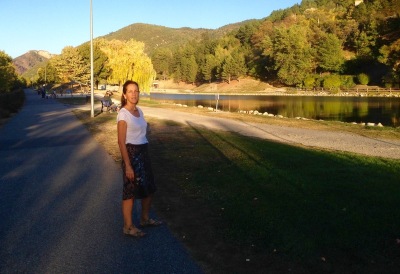 The path along the river has a leisure activities; this is the boating lake.  And all with great mountain views.

A.M. – K ran along the river with trusty O (not towed!).  I rested and brekkied, got Jez ready to sail – a quote from “The Rhyme of the Ancient Mariner” seems appropriate here….

“The ship drove fast, loud roared the blast – and southward aye we fled”

(not sure whose blast roared loudest – Oscar!!!)

Southward brought us swiftly to Les Maurettes campsite where we had stayed last March/April – to see Sarah, Gareth and Jade and the new addition to the family – Cian.  Lovely site but office closed until 2:00 pm – a French/German couple were quite upset at their wait for a pitch where they could get a good TV signal – he wanted French and she was German, so they were loyal to their national TV stations.  They’d spent all morning moving the van and testing out pitches!  Much easier to not have a TV on board, like us.

The site was very busy. We got our pitch OK – the choice of one!  We seemed to be the sole GB van. A lot of French and Germans with the off smattering of Scandinavians.  Over our 4 night stay, there was relatively little movement off the pitches … the weather is still warm here – low 20s and obviously people are happy to stay for a longer time on the Cote d’Azur … understandable.

K here:  As well as heading back to Antibes to meet J’s new grandson, I also had an overnight flight booked to Gatwick.  A Thames Polytechnic (Greenwich Uni, depending on whom you talk to!) Business and International Marketing reunion.  Gill lives in Twickenham and I’d reserved a bed there and used her address for some very important post.  About 2 years ago, I frugally bought an iPhone 5c with only 8GB and have regretted it ever since.  Not being able to store more than 4 photos and virtually no apps has been a real pain.  When we were home in Bristol, Kay mentioned she was thinking of replacing her iPhone 6 …. she and Stephen both like their tech and frog leap each other with the latest.  So I purchased Kay’s phone and she posted it to Gill’s.  A quick cuppa with Gill and Gordon and I was off into town to buy a protective case for it … and thence soon after I’d swapped over and downloaded apps I wanted, with still loads of space left.  Oh joy!  Other things I notice are how sensitive the keyboard is and the screen is really clear.  Loving it.

The appointed drinks time was 5.00 and we managed a couple of Aperol Spritz before catching the train into St James’ for the reunion.  Gill and Bron (sadly Al was poorly and did not make it) are ‘me old muckers’, but I’ve not seen any of the others for 30 years.  Most were instantly identifiable … but wow, the girls really have aged well.  Not even approaching middle age … any of us.  Some had brought pix and the 80’s clothes and hair styles were very Bananarama!  It was a pretty alcofrolic evening with lots of laughs … Gill and I lost track of the time and had to do a 400m sprint across the concourse at Waterloo to catch the 0046.

A couple of Aperol Spritz before we set off.

And none of us have changed at all! 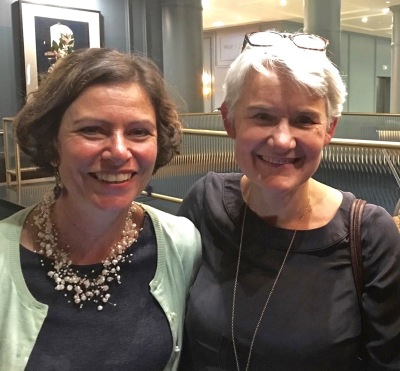 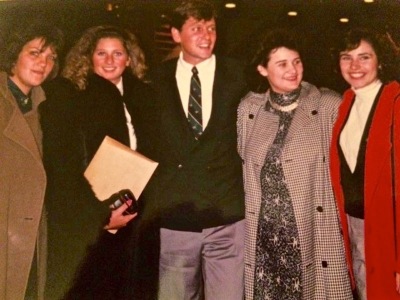 The next morning we giggled and exclaimed our way through Gill’s photo albums.  It was wonderful to catch up with people I’ve not seen for such a long time, but reunions are pretty much about curiosity and mine has been satisfied.

My 2.00 flight was delayed an hour due to a faulty laptop … seems mad that it took an hour to replace / repair something that is essentially disposable and not part of the plane’s infrastructure.  Polite announcements from the Pilot about our patience with the delay … as if we the choice!  Lovely to arrive back just in time to see the blue skies again.  Great time, but very great to be back with my boys.

And guess who are so glad to see you back – the Boyzzz!

We both ran down into the local park.  J managed to get lost and had to ‘ring a friend’.  K found him on the Find a Friend app and navigated him back to base.

K started to ‘laundrify’ with the onsite facility – clothes line from tree to tree, jobs done including finalising my tax return/amount owed to HMRC – not too much… then out with the e-bikes for a jaunt to Antibes.  Oscar barked a bit to begin – then the Kay-suggested covering the Os-car solution kicked in – almost silence, again.  And not a bark on the return leg.  He’s learning :).  A visit to the e-cig shop to remedy a minor issue.  Ice creams (as always) although our favourite shop was closed.

Playing with my ‘new’ iPhone 6 – loving the camera definition.