Before leaving Stobrec campsite, we met a lovely Italian family – with 4 daughters – much chat about our travels in Italia and Sicilia… and why mum had decided to go travelling … partly to do with enforced injections on young teen girls, with no parental opt out – appratenly some experimental deal with the USA!  Packed up and services completed, we Jezzied along the beautiful coast towards – yes, a brand new country Bosnia and Herzegovina!   Border controls – documents handed for perusal.  Passports handed over at both Croatian exit and BiH entry points.  We thought we were through and did our usual “welcome to …” salute, when another border control.  Passports again, V5 and insurance were handed over.  The chappie asked where we were headed and cheerily wished happy travels.  So easy and quick … let’s hope Montenegro and Albania are as smooth.

As soon as the actual border was crossed, we noticed more street hawkers, mostly selling oranges, and more unfinished houses.  But the drive was really pretty following a river to our chosen overnight at Blagaj, just south of Mostar.   Our campsite was – ‘interesting’ – “Camping Mali Wimbledon” – decked out in SW19 colours – with lawn tennis courts!  We could play – I would be Pete Compress or Ilie Nasty and K would be Killy Bean Jing!!!  K objected to the request for EUR19 per night, having just paid EUR12 per night for a serviced beach front pitch … the owner asked what she was happy to pay … EUR15 was a good compromise  Perfectly good facilities – our pick of pitches – and a semi permanent Austrian motor homing resident gentleman called Walter. We perambulated the very short distance into town – for coffee and snacks. K bought local wine for £1.80 (OK) and £2.25 (really pretty good) – per litre!  The local yellow buses are decorated with “Gift from the Japanese People to Bosnia and Herzegovina 2002”.

The Croatian Dalmatian coastline, getting slightly less dramatic as you head south.

Bike maintenance/repairs – my front wheel still has a slow puncture – in the new inner tube (?) and K’s gears/chain need regular tensioning – never had this with our old fashioned units…  Mostar was cold – the ‘Old Bridge’ is an interesting construction – destroyed in the 1992-95 war (why?) and rebuilt faithfully in 2004. Very touristy – lunch outside, as Oscar not welcome at 3 restaurants until our hunger pangs gave in … and we sat outside – borderline cold but excellent food.  The wares on sale in the markets ranged from metalwork to pashminas and colourful plates……no locally made rennis tacquets for our Grand Slam,Slap – we’ve never played behind a waterfall…  Both agreed the town left us a bit cold … was it just the weather?

Mostar: The Stari Most … old bridge.  Although Mostar had more damage in the 1992-95 war that in any previous conflict.  This Ottoman bridge of over 400 years was destroyed and the replacement built in 2004.  I felt it a bit soul-less. 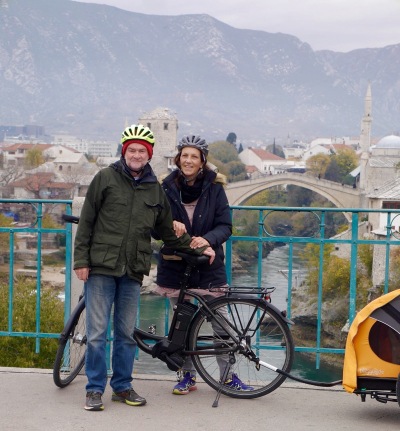 Pleasant chap, helpfully stood in the road to take our pic. 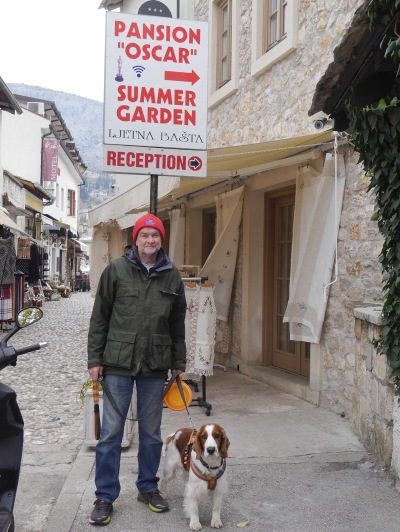 We parked and locked the bikes next door to the Oscar hotel. Where else?

Walking down the old bazaar towards the old (new) bridge.

Lots of mosques all with these elegant slender towers.

The American who offered to take our pic here, just had to risk being run over by other tourists.

The Karadozbegova Mosque:  the most sacred Islamic architecture in Herzegovena. originally built in 1557, the minaret was destroyed by tank and artillery fire. 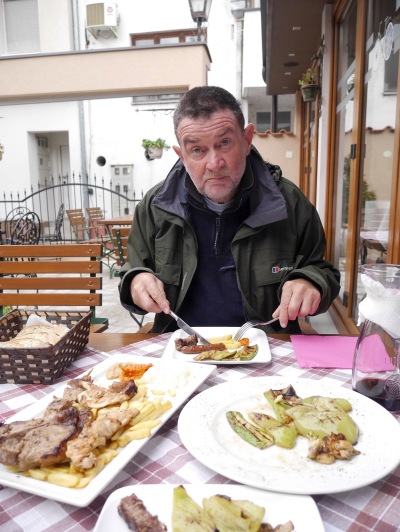 One portion of mixed meat and grilled veggies and we couldn’t eat it all … £17 including wine and tip.  The two versions of sausage were yummy.  I bought some at a local butcher near the campsite … and still yummy even without a griddle.

The walk up to the fortress was steep but good hill training – Oscar did his ‘happy dance’ with the usual stick in his gob – the trick is to wrest it from his mouth without losing one’s fingers as he sidesteps around in rugby style… since his international cricket season doesn’t conflict with rugby – he could play flanker for Wales….. Well, K regularly says he is a ‘planker’ – same position?  The castle was – a castle – in ruins but with splendid views…

So, we ‘whirled’ down to the Dervish House.  Met a lovely young Chinese lady called Gin (we failed to mention our proclivity for the drink) and we separately toured the complex of buildings – very evocative – and a place which would inspire a contemplative atmosphere…

We eschewed the touristy restaurants by the Dervish house and headed for one almost opposite the campsite.  Just as well it was staggering distance … a litre of white, a complimentary grappa and several fruit brandies … and then a couple of rounds with the locals …Try saying “Tronkmetplative stratosphere” with a mouthful of Bosnian sausage!  I failed… but the sausage was delicious!  The owner spoke very limited English, but called J ‘ the chef’ to follow him.  Doesn’t he know Party Jez, is a democracy; we don’t have a boss!.  Anyway, J was proudly shown the fruit trees, the veggie plot, the poly tunnel and then the still in the basement for making grappa!

A nothing special, but a special day.

Us and a semi resident Austrian amongst the leafless cherry trees.

Not sure what these pillars are along the river bed.

Fortress of Herceg Stjepan: he ruled Hum (present day Herzegovina) in the Middle Ages, and apparently the last Queen – Katarina was born here. 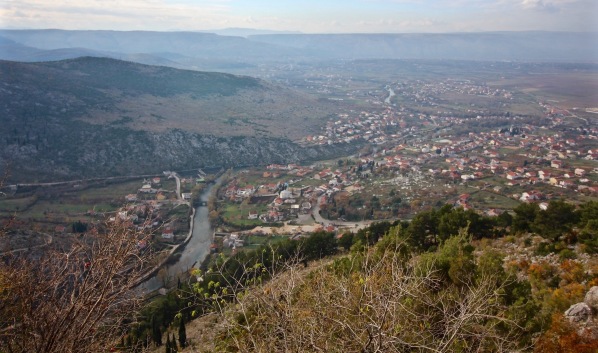 Great view of the Neretva River and valley.  I could just make a small grey box that was Jez.

Most of the castle is ruins; you can see some attempts to shore it up and repair / replace parts.  But all open access, with warnings about walking too close to the ‘scenic’ walls! 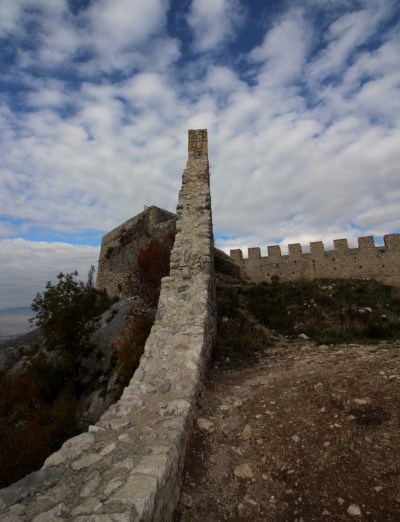 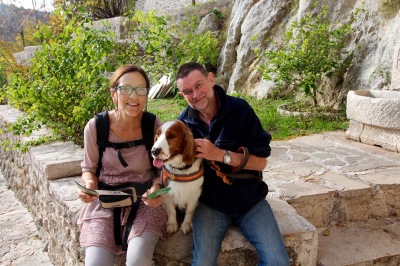 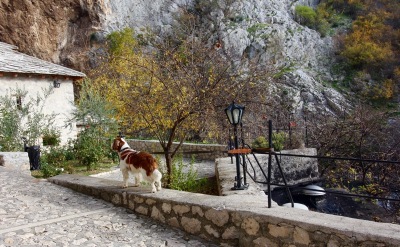 We took turns to go  in …. no prizes for guessing who Oscar is waiting for! 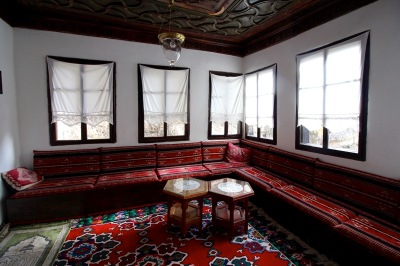 The Dervish House is still used 3 times a week for Dervish meditation and prayer.

The house, far right, and the complex were mostly restored.  Bits of rock from the 250m cliff behind keep falling on it, which doesn’t help. 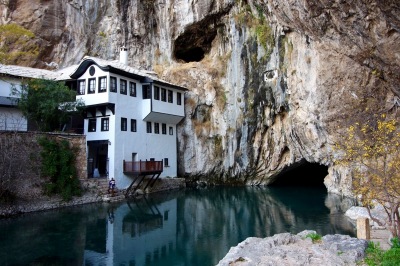 The source of the river Buna. 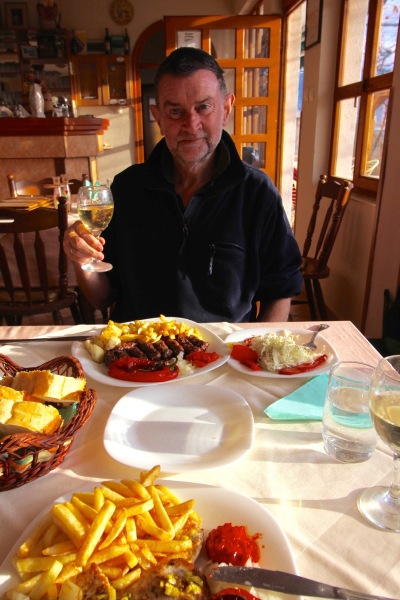 James had the small sausages we had a few of yesterday … really tasty and far too much food again!

Followed by far too much booze … a free home made grappa, followed by quite a few fruit brandies!

Jablanica is famous for a notable victory by the local partisans in 1943 – heroics in rescuing 4,000 wounded and getting them to safety after blowing up the bridge to delay the German advance…..

We don’t really want to mention much about the totally destructive 1992-95 war – but you just cannot ignore it – so many town cemeteries full of new-looking graves – and buildings with shell and bullet holes…  Let’s just hope that people pray that it will never happen again…anywhere. But it does!

OK – look at the photos, readers – please…. What is “brain fart”?  Is it the standard answer by a politician to a difficult question?  A teacher’s response to a difficult student?  A really high score on “Mensa”?   Personally, I believe it is a soft “expeliarum” by a clever dick (was Richard Nixon clever after Watergaffe?).  “Expeliarum” -we’ve just finished all the Potter audiobooks – disaster!

It was here that the Partisans won an unlikely victory in WW2, in the Battle of Neretva.  They escaped with 4000 wounded, some carried by children, across the bridge, that they then destroyed – keeping the Germans and Chetniks the other side of the gorge.

The bridge is still a reminder, hanging off the gorge and in the water. 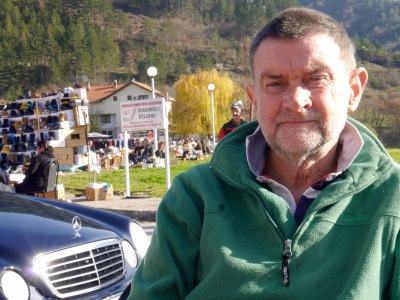 Coffee stop and then some veggie purchases in the market behind.  A lot of home grown veg, socks and second hand clothes.  Jablanica is also known for its roadside restaurants serving roasted lamb.  We saw some being ‘spitted’ … as a lover of lamb, it would have been good to stop … but the early nights and our destination beckoned.

All today’s driving has been along river gorges, with some snow on the peaks and at one point, quite thickly on the sides of the road.