In the last post, I made mention of that funny stuff comes from the sky – this morning, it was a multiplicraination!  Bilateral decision to postpone the Olympic training to another day….  We ‘LPGd’ and set off across the Rio Antirrio Bridge – not to Janeiro, Oscar!  The bridge was built by a consortium including my old shareholder (at SRC) Vinci of France – opened in 2004 – I received an invite at the time but couldn’t make it.  It set all kinds of records and looks beautiful. Shortly after opening, a long cable stay fell on to the road and closed the bridge – may have been a lightning strike. I hope to visit the people there sometime on this trip…..
On to – a winery – the second oldest business in Greece, after the National Bank and before a chocolate company – so if you’re Greek, you take your savings from the bank and buy – you get the picture…  The guide Maria was fascinating!  Articulate, funny, highly informative – and wonderfully theatrical!  In one story, she said “Queen Margarita suffered from tubercul (pause) – we all chorused -osis!!!”  Apparently, this wine is very good for health, including low blood pressure….. well, you all know what we immediately suffer from!!!  Definitely a recommended visit.  She also arranged for us to buy 20 litres of her olive oil – for €23!
The rain increased – we briefly considered going straight to tomorrow’s intended campsite – but stopped short – wild camping for the night, at the sea again – and we’ll save the campsite fee to spend on the olive oil, which we will pick up tomorrow…..  By the way, K describes this stuff as “wet rain” – based on her experiences in Brizzle, perchance?
Headline in the local news – “Greece to have white Christmas”!!!
Sunset tonight 5.17 – the Shortest Day.  Spring is on it’s way. 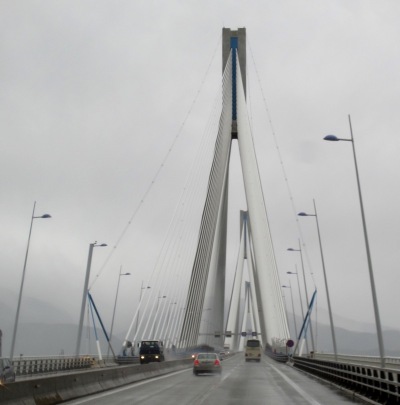 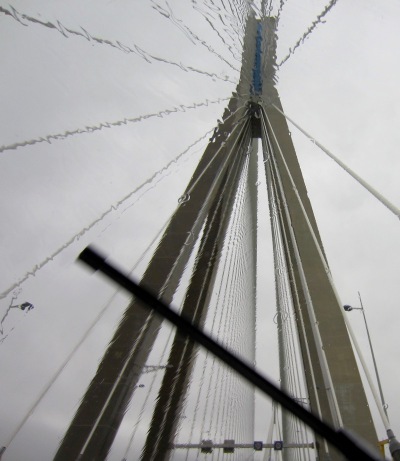 Not camera shake, but that wet stuff on the screen. 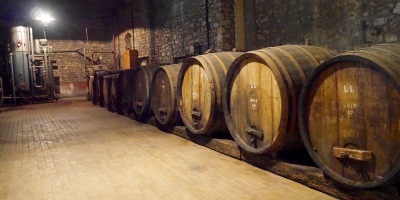 From 1908 the company specialised in production of the Mavrodaphne and Demestica wines.

Clauss died shortly after, and the company passed into the hands of a German named Gudert from whom on the outbreak of World War I the Greek government confiscated the winery as an enemy alien asset. In 1920 it passed into the ownership of Vlassis Antonopoulos, and from then on, with a slight pause during the German occupation in World War II, the company developed rapidly. 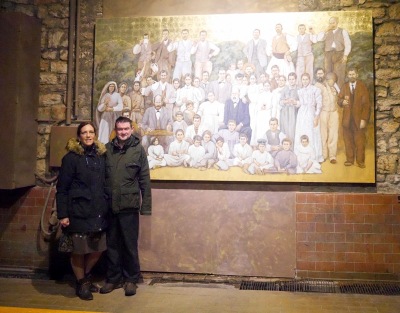 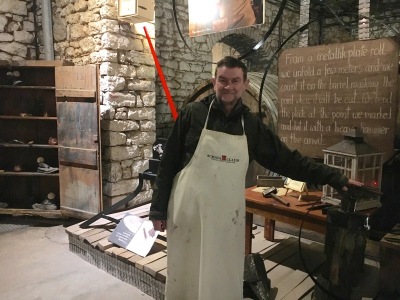 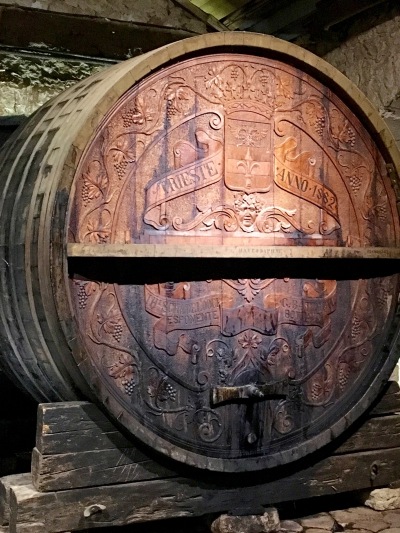 Clauss started with two mega barrels he purchased from the Great Exhibition in Trieste … they still contain wine from 1889. 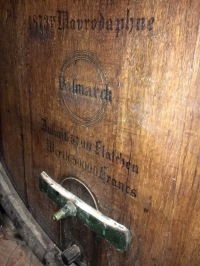 Given his German heritage, he dedicated a barrel to Bismark. 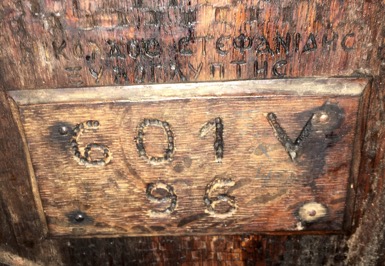 The wine in this barrel was made to the secret recipe on page 601 of the founders book.

We left our very wet overnighting spot and headed back to the wine castle to collect our olive oil from the lovely Maria…  Next port of call was Ionion Campsite – much recommended by lots of folk. We met Carol and Mike, whose blog we follow https://moho-dream.co.uk – and Dave. Evening drinks with Mike and Carol – very Jolly and pre-Christmasy… 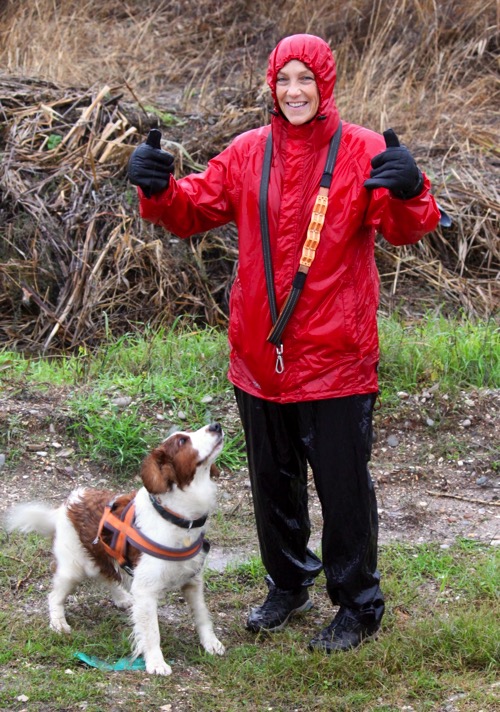 Morning drenching on our wild pitch.

Jez was settled into his sunlit pitch with nearby sea views – K did massive laundry – we cleaned the van and showered ourselves – lovely heated shower rooms and piping hot water!  We are even picking up an english speaking radio station … Island FM from Xante.  Katherine prepared my favourite ever veggie in the slow cooker – red cabbage – yummy…..   A top run in the morning had set us up nicely for the day. 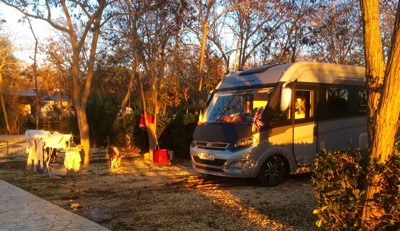 Note the Irish and British flags are fluttering on the bonnet, and the laundry on the rack! 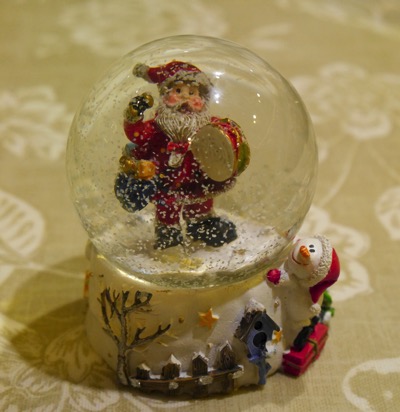 Another good training run and then we moved all of 5 metres to get a full on beachside pitch – vacated by a German family – efharristo and danke to you all…  In search of food supplies we biked to a town – 20k round trip.  K was prepping food for 7 in our supermobile tonight – we’ve had 6 before….pushing the boat out.  Carol, Mike, Julia, Simon and Dave joined us – the conversation and wine flowed – excellent company indeed! 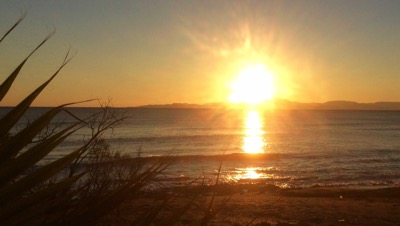 The German family due to arrive had their caravan moved to another pitch, so we hopped into their beach front pitch.  Not a beach towel in sight. 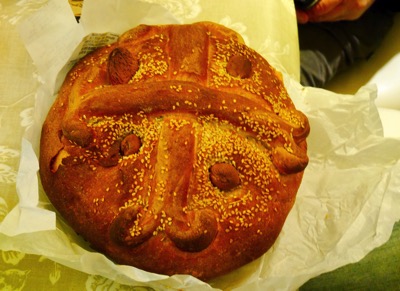 Bakery told me this is a special bread for Christmas …. with almonds and hazelnuts in shells

938 – Monday 25th December:  A Traditional Christmas in the Sun

Well – Happy Crimbo everyone – Nollag Shona Dhuibh go leir to the Celtic contingent!!!   Oscar says Happy K9day to Kinsey, Ice, Poppy and Boo and all his friends!
We sat outside in the sun to brekkie and open prezzies – phone calls with family.  A lazy slow and festive lunch with fizzy bubblies…..our K-Haute Cuisine was ‘perfecto’.
An afternoon nap was mandated and in the evening – more seasonal drinks with Carol and Mike.  We remembered Punta Bracetto in 2015 – cheers, Dan the man – Lagos in 2016 with the lovely Shirley, Margaret, Chris and Mary – slainte to you all!!!  We’ll meet again soon and maybe in Arisaig? 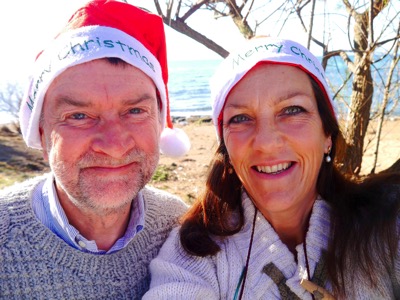 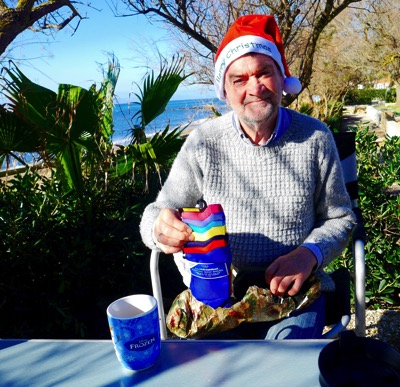 Socks had to feature … nothing mundane about the colours! 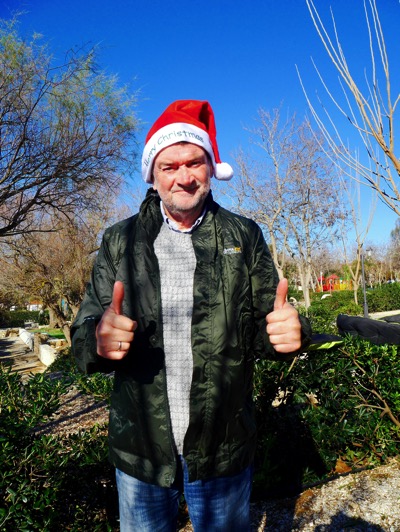 And a new waterproof. 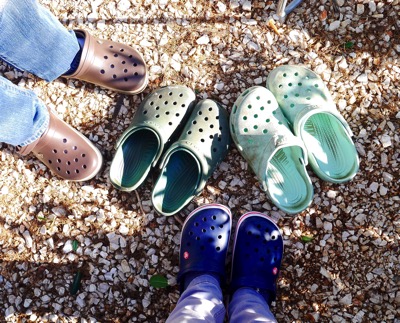 In with the new and out with the old. 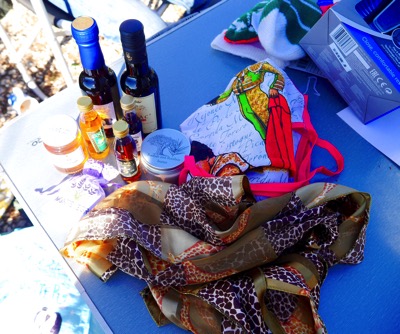 My Christmas Stocking which is a collated during the year on the Aged P’s travels; white a few dodgy bottles!  I now do the same for Maddy. 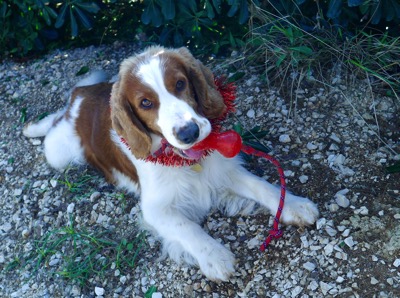 A festive dog with his festive new squeaker. 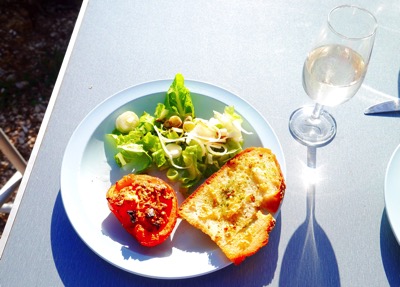 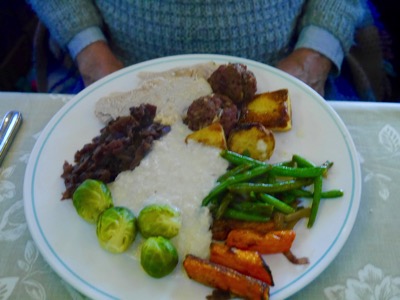 And the main turkey event …. cooked in a slow cooker, two rings and the oven … including homemade bread sauce, Yum!

A lazy hazy day – of pottering – where do the days go?  As we miss families especially at this time of year – we’ve decided to spend Christmas 2018 in the UK and Ireland – cheers in advance… yet to invite ourselves!!!
Julia and Simon had us around to a delicious supper of leftovers – with Dave – and mulled wine.  Nightcap in Jez – some of K’s stocking filler miniature bottles – then Zzzzzs…. 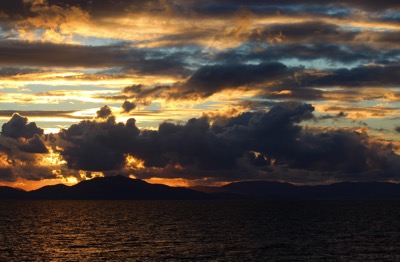 We said adieu to Carol and Mike – they’re heading down south like us – so it’s likely we’ll meet again, soon. Dave had left earlier – safe travels to you all!  The local castle looked inviting but not in the heavy rain forecast – so – a pre departure jobs day – more laundry, wc emptying, grey waste – blog – doggybeachwalking – cleaning, etc.  And – the sun came out to shine – on the righteous?