We left the Wildcamping campsite (there’s an oxymoron!)  a.m. – most of our friends and ourselves moving to a pre booked aire at Alblasserdam – and for a farewell meal…..

We drove to the Cruquius Museum on the way to the aire – site of Hollands largest steam engine – from Coventry! Massive steam power driving more water power – sucking the water from the Amsterdam basin into the canals – and still working! British engineering working with Dutch technicians….

I slept later in the adternoon and K took doggies to the Zaastad windmills – rush hour with tourists and selfie sticks – not the best way to see a place.

Driving to Alblasserdam took far too long … well into aperitif time!  We might not work, but we hit Amsterdam and Den Haag rush hours … 2 for the price of one.  Instantly on arrival two things happened.  1)  We got chairs out and joined our friends for a drink.  2)  K got told off by the aire manager … all dogs on leads at all times.  Now Corrie was technically was on a lead, just K was not attached to the other end.  Juggling a tugging Oscar, a chair and a drink, Corrie had been allowed to walk over free and was spotted.  K apologised and the manager offered to show her the site rules!  In fact he was a bit of a mini Himmler, he pounced on any misdemeanour almost before it happened, but that’s what keeps the aire pleasant for all.  Our tour leaders also came under his displeasure too, as they pretty much arrived last in our group … apparently tour leaders SHOULD arrive first!

The next day we caught the free shuttle bus from aire to the UNESCO Kinderdijk Windmills.  On arrival coffee & cake was consumed whilst we downloaded an audio guide. No sign of Don Coyote – sorry, Don Quixote – wrong country methinks…  no tiliting here.   Later K walked the children (well, they are our kiddies) – Holland is not great for dog walking off lead, but she found a park where they were allowed … until May 1st!  Shopping – and a lovely supper out with our wild camper friends! Not a wild supper, but in a smarts restaurant – and afterwards to a nearby hostelry – managed to stay until 1:30 am with Ben and Lin – ‘Benelin’ – good for easing throats – we eased some wine into ours!

We all left after 2 nights – and lots of adieus/Hasta prontos, etc. “We’ll meet again, somewhere sometime…”

Now after the lovely flatlands of Holland – to Germany and the mountains…….

You can see the metal spider like arms that pull plungers up, to pull water up from the lower level the the canal on the right.

The machinery was set in motion which was an amazing sight.  The cylinder is in its highest position, pulling the spider legs up, drawing up the water.  It was a really smooth action, and had a breaking mechanism top and bottom.  It has not been used since 1933, but still in complete working order.

The ‘wells’ that sucked up water.

Tourist territory.  Typical houses and windmills have been moved here. 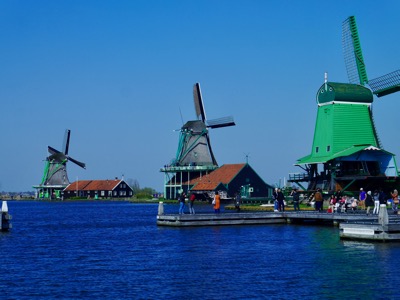 19 windmills used to drain Alblasserwaard.  They had to keep adding new drainage pools and windmills as water levels changed. 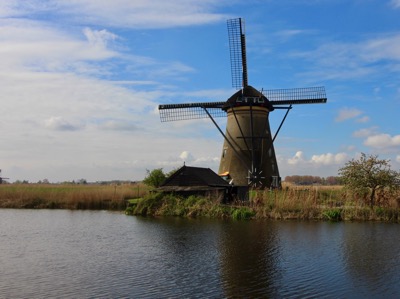 A few are museums, but most are lived in.

There was a story about how a mother died saving her child from a sail, as he’d forgotten which exit door to use (depending on wind direction).  The come down to a foot above the ground and do move fast. 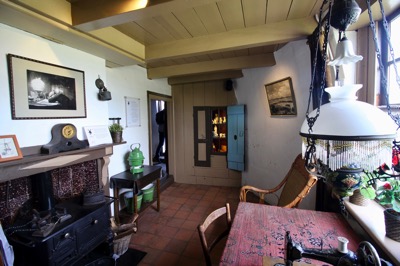 Where the Noord and Lek converge.  And my fave pic of the windmills.