A short drive to a free permitted parking in Hahnenklee, with limited services, but 60l water for EUR2.  The guide book described Hahnenklee as a small and more tasteful spa town.  As we wandered this very small town, we decided it was a bit run down and lacked charm.  However, it did have a pretty Norwegian style stave church which we looked at before lunch.  Then I took CO2 for a 8km walk through the woods, with Corrie on the lead … just in case any protective breeding boar were around.  Oscar just plods along within 30m of me, so he’s no worry.  At the top of the hill is a complex with cable car, chair lift, bike park, go carts and a rodelbahn (karts on a track).  Germany really is one big outdoor playground.

German tradition is to have white asparagus around Easter, so we had that with a Bechamel sauce as our starter, followed by a turkey casserole … my family’s tradition is turkey at home … thus keeping all traditions alive in Jez.

It was over this meal, that our plans changed again.  I’m not suggesting that we were inebriated, but mellow and happy with our lot.  Where shall we go after Kerstin’s 50th party on 11-12th May?  Stay in Germany?  Back to Naples?  Slovenia.  Then James came found it!  Sardinia and Corsica.  To justify the ferry costs, we shall put back our return to the UK by nearly a month … It will mean we don’t do our normal Ireland Scotland Summer trip, but if the dreaded B no deal does happen, we will have plenty of time outside the EU Schengen zone.  So we will make the most of our island hopping.  Now into planning mode!  I later ordered some guide books from eBay (old and used) to be sent to Kerstin’s for us to pick up … and forgot to change the delivery address from our house in Combe Martin … the one we are now using for holiday lets.  Fortunately our lovely plumber and his parents are staying there, so thank you Steve for posting them on!

Incidentally, Kerstin is our usual central Europe international postal address.  We’ve used her on previous trips for a replacement driving license and a green card.  On this trip, we also used her for James’ hormone injection.  The doctor agreed to give J the prescription so he could bring the pre loaded injection away with him, but the pharmacy did not get one in stock before we set off.  So my Aged P’s to the rescue again … they collected it and posted it to Kerstin’s.  Mum told a little fib … she told the Post Office that she thought it was a pen!  It didn’t arrive and a bank card she posted days later had arrived.  Bugger, Bugger.  It must have been stoped at the border and destroyed.  We booked J a flight home from Munich and a doctors appointment.  Then 3 days later, Kerstin sent me a pic of a parcel … the injection had arrived!!!  Must’ve either gone on the slow boat via China or, I reckon, had been scanned and recognised as medical and not illegal.  The good news is J doesn’t have to fly home for 2 nights and we did get the airport duties back from EasyJet!

We are in witch territory.  We’ve seen a lot of posters with witches and all the lamp post had a selection of Hexen.

Views from the top of the Bocksberg Hill on my afternoon walk. 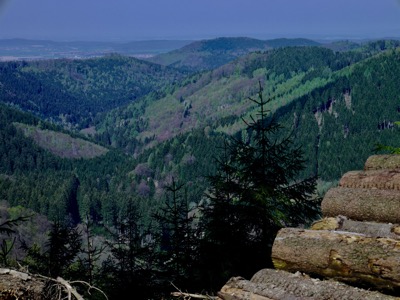 I passed this view twice, as a path I’d intended to follow didn’t exist!

Back-pack loaded and we set off on the Love Bench Walk 7km around the base of the hill.  Really well done … another feature of the German Outdoor Playground … a bit of fun to get people out walking.  It was well signposted, wooden benches carved with hearts, love poems, and plaques explaining the stages of a relationship; from dewy eyed lively chatter when love can deepen or not develop to a long lasting marriage where so much has been shared.  We stopped en route for Kaffee and Kuchen … huge slabs (I helped J finish his!) and didn’t really want our picnic lunch that we’d lugged around!

When we got back, we filled with water and I went into cleaning mode.  Initially, I put all the underwear and a few T Shirts into bowls to soak and then we cleaned the van.  When it came to rising and spinning, I decided to get the twin tub out.  But as we were in a car park it was not the done thing!  So we put the twin tub in Jez and bowls to catch the water … stealth laundry!  We also showered ourselves!!!

The stealth laundry was so successful, that we repeated it the next morning and did 6 pairs of trousers, the rest of the tops and fleeces!  Clothes drying on hangers from every door and cupboard handle!  Sunny and windy – perfect with all the windows open!

Start of the Love Bench Walk.

J with Corrie on one of the love benches.

Quite a few cairns … 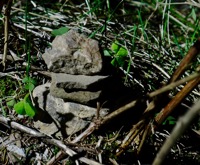 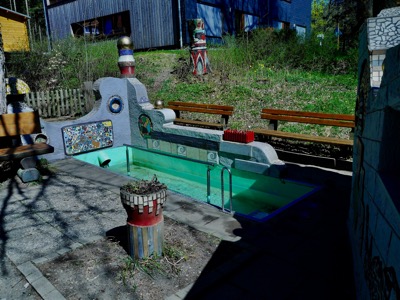 A foot bath at the end of the walk.  And 3 people were using it.

Stealth laundry.  Equivalent to 4 machine loads, which cost less than EUR4 for the water used.  Just our time.  The twin tub has certainly more than paid for itself.