Services and off to Bavaria.  Nice quiet overnighter in the Veldsteiner Forest … I took CO2 for a signed circular walk with some interesting rock formations.  Pitch black at night with great star gazing.

The motorbike belonged to a chap who sat in the picnic hut and drank 2 litres of coke. 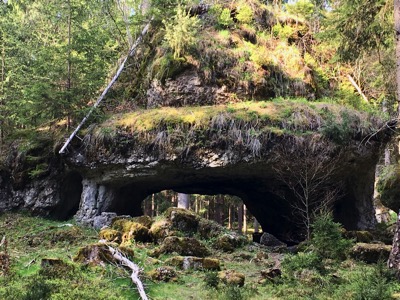 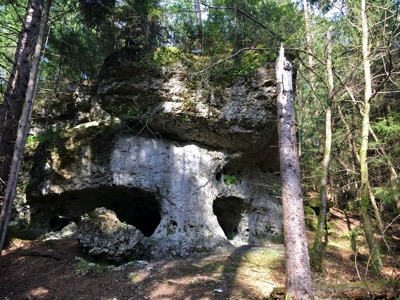 Being the third largest city in Bavaria, Augsberg is, and feels like, a large city.  After the timber buildings and cute villages of the Harz, the buildings here are large and imposing.  Again a riverside walk with CO2 on arrival.  On Friday morning we finally ran between shower and then had a quiet morning in the van whilst the rain continued to descend.  Eventually, it eased and we wandered into town.  A chilly and indifferent Kaffee and Kuchen sitting on a pavement and we made it back to Jez just as the rain came down again.  Services and off to Landsberg am Lech.

The Fuggeri – Europes earliest social housing development from 1516.  Now it is mostly retired people. but they only pay EUR1 per annum in rent, but they have to attend prayers 3 times daily.  And a fine if they are late home after the gate shuts!

Grafitti in the underpass … Matala a hippy comnunity where we spent about 6 nights in Crete abut a year ago.  And where we left off of our Greek Odyssey to return to the UK for J’s medical treatment, so where we will re-start our exploration of Crete this Autumn.

1154 – Legging it Around Landsberg am Lech & Monastery Beer

Kerstin arrived about 9.00 … we had just managed to get up in time!!!  Kaffee and Kuchen (what again?!) and a wander around the town. Then out through countryside and back passing some lakes, captive (wild) boar and piglets, deer and lakes.  Again more countryside infrastructure to encourage people into the Big Outdoors.   Before setting off, Kerstin and I had a damp wander around the new car festival in the car park and someone (not me) had a second cake of the day!  Pretty much all brands were represented and we had a go at choosing Kerstin’s new car.  Her 17 yr old Vector is due its MOT this month (hardly run in at 200,000+ km) and her normal mechanic is refusing to ‘get’ it through another MOT.

Our overnight was not far away but very different.  A monastery Stellplatz.  A massive complex, with an independent brewery.  Kerstin investigated and came back with good news … the Bier Stube is open, and we can take our own food up there, so long as we buy drinks.  Time was little pressed, as the bar shut at 8.00 when the monks go off for prayers, but we had till 9.00 to drink up.  A beef one pot went into the pressure cooker and whilst it pressurised, I beat Kerstin at Cribb.  One for his Knob!

When we arrived, there were few free tables, but soon after 8.00, it pretty much emptied out … a surprise as there was plenty of drinking time left!  K and I were rather keen on the Dunkel.

The chaps at the next table could work Kerstin’s phone camera, but struggled with a pukka camera!  Spot the pressure cooker!  These were the SMALL beers!

As a regular, you can rent a place to keep your beer stein.

K and I walked CO2 around part of the extensive monastery farm land and past some of the Stages of the Cross.  We got a good view back at the huge Monastery complex and the sizeable brewery.  After some persistent questioning, Kerstin discovered that there are only 5 monks left here. All this commercialism (the restaurant and bars, including the outside terrace seat over 3,500 people and there are function rooms, the shops, farm) for just 5 monks!!  It keeps the premises in good order though. 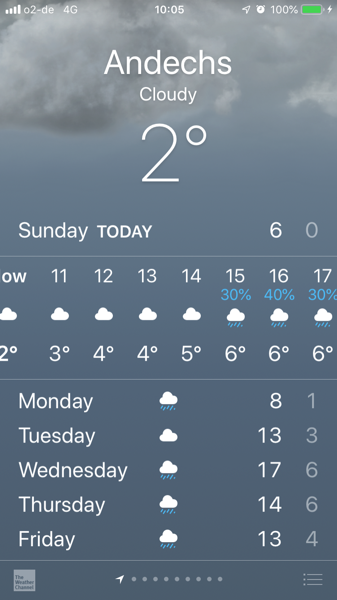 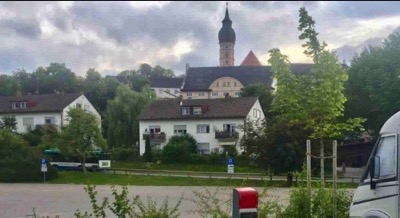 Just part of the monastery complex.  A massive car park for all the visitors.  The Stellplatz was EUR14 per night without electricity, but the car park was free.

The church was, as you would expect, immaculate and ornate.  The money generated has to be spent somewhere!

Another short drive to Starnberg Lake and our stop for two nights.  Kerstin had been concerned that her car would start after the flurries of snow and hail, but it got here.  She and I then drove it to Starnberg town for a wander and an ice cream.  A place that will definitely not be on our “must go back to’ list … in the cold weather it holds no lure.  Perhaps in the summer with all the water sports it may have a different feel.

We ate what was left of a sausage casserole after we had to wash the sausages and re-cook it.  It had been nicely stewing in the slow cooker all day. Our hab door is knackered and needs banging shut … when doing so, the slow cooker slid off the shelf and …  we managed to get most of it up with Kerstin contorting her body to get all the finely chopped onion and celery pieces up from inside the handbrake casing and from under the driver’s chair!  Kerstin then left us to go to the comfort of her Munchen hotel room to get a good night’s sleep and shower for her lecture on Monday afternoon.  Perhaps she just didn’t want to wake up to the smell of onion and white wine sauce!

On damp dismal days, we tend to have admin sessions or go for a long lunch.  Today, we walked the 1 km to pick up the Grosse Rundfahrt around the Starnberg Lake.  Coffee and cake on arrival, two glasses of wine and then a local dish … meat loaf (think frankfurter sausage texture) and potato salad to soak up the wine!  So although the lunch wasn’t a great culinary experience, the scenery varied a bit.  And it was very relaxing 4 hours.

Typical village along the shore.

You can just make out the snow atop them there hills in the South. 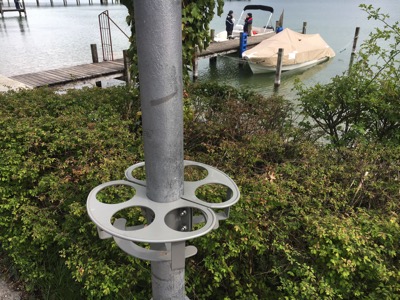 Any guesses what this is?

Kerstin explained that poor people were going through the rubbish bins to find bottles and cans that have a deposit on them.  People can now put their bottles in here for ease.  Sometimes they are on waste bins.