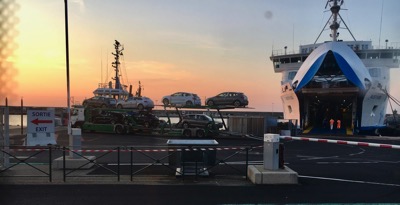 Harbourside at crack-o-dawn in Bastia, Corsica watching this car transporter be loaded quickly and driven away … by a very petite lady. 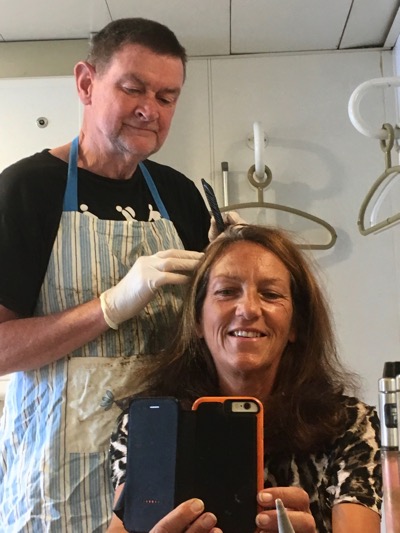 On our crossing from Bastia to Nice, we had a cabin.  Daytime, and we couldn’t sleep all morning.  What was one supposed to do … make use of the shower for a hair dye of course!

We know Nice pretty well, but not this from the sea view of it. 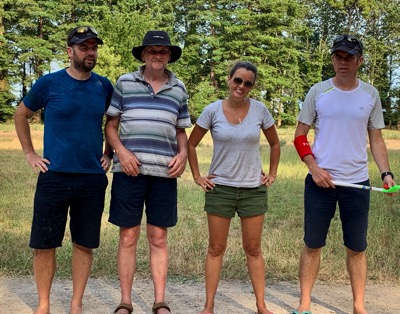 On arrival in Nice we went straight to our usual campsite so we could meet up with three of J’s 4 children for an afternoon in the nearby park.

And with their kids … full house on grandchildren. 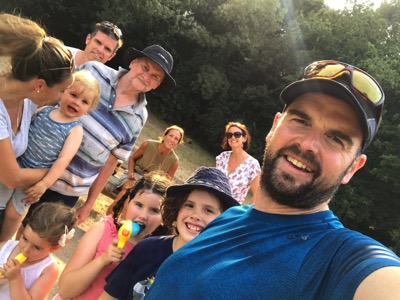 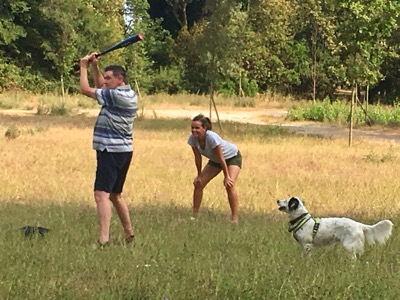 …. Oscar knew exactly what to do with the balls! 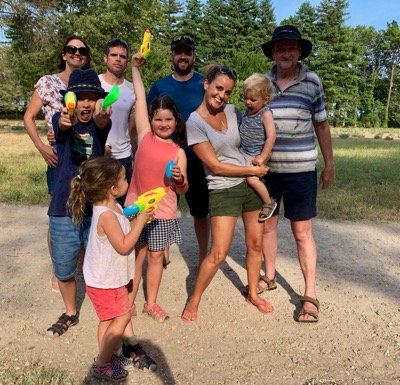 And water pistols to play with.

Did I mention, it was still hot!

A driving day with loads, and I mean loads of Deviations and road works.  We paid for the motorway to get west along the south coast but not to head up NW to Charente region to see my family at Clare and Chris’ house.  We arrived mid afternoon on Wednesday and went straight in the pool!  Fab to relax with the Aged P’s (not that it was long since we’d seen them, but with Clare and youngest Zozo, and then Chris, Louis and Abbie arrived.  We took one day out to stay on a EUR9/night munipal campsite nearby to spend time with Bev and Mike who have a house let out as a Gite nearby. 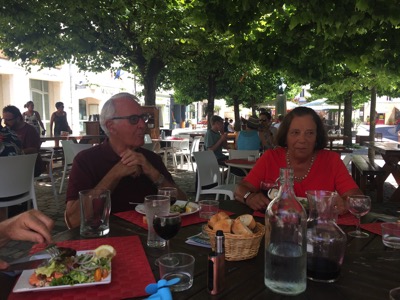 Aubeterre.  Would that be another lunch out?

Oops … would that be a red wine incident??? 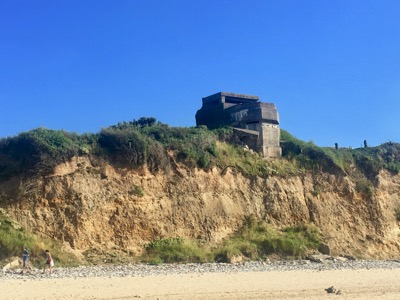 The beach near Sangatte aire.  Had to remind myself that these sea defences were German. Coming back from this walk, I got a phone call from a woeful James … He’d dropped my sharp knife vertically onto the knuckle of his foot.  Blood everywhere!  That was the second of the carpets to head for the bin … Corrie had pooped on the other!

We crossed back to Folkestone and wended our way to Rustington to meet up with Ian, Mel and little (he’s grown again) Jimmy.  Would that have been another big wine night?  I have no idea.  I don’t remember!  Maddy had joined us but left at a sensible hour before it got messy!

Where’s the sun gone.  A very windy walk on the Sussex coast.

As ever, Mr Competitive Ian won the Puket tournament.

Then the M25.  Why does it always rain and have traffic jams on the way back?  I could recycle the same pic.

For most of this part of our stay in the UK, we left Jez on Clare and Chris’ driveway and moved in with Mum and Dad.  I seem to remember Dad giving a speech at my first wedding, along the lines of, love her, and love it when she leaves but then she comes back!  And I’m still coming back and filling the attic!

As we’d extended this trip by going to Corsica and Sardinia, we would not have time to do our normal Ireland and Scotland tour.  So James flew to Dublin for the weekend to see 3 of his 5 siblings.

Michelle and Craig became van dwellers for 2 nights in the New Forrest with me whilst J away.  Oh, and their 2 Springers … so that made 4 mid sized dogs and 3 adults in Jez.  It worked fine!  And the sun came out!!  Good walking … flat!

We spent a few nights at our usual CL Coxbridge Farm, and Caroline and Terry came to supper.  Trying to persuade them to visit us in the Caucuses.  And we fitted in dentist and doctors etc. We also started the job of emptying Jez.

Wilding isn’t always possible in the UK – after an abortive 3 car parks with height barriers and no overnighting signs, we ended up in a small farm site.  Great location as it was right on the Ridgeway and close to Uffington Iron Age Fort and the White Horse. 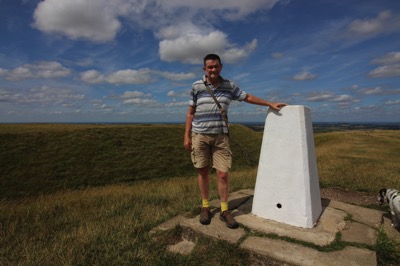 I did one walk solo with great views of the rolling hills.  Amazed to still see ears of corn as all the harvesting had long since been done in Europe. 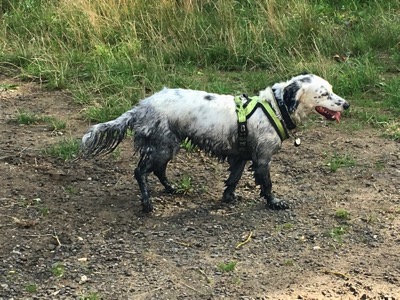 We joined a wildcamping.co.uk meet near Abingdon.  Caught up with some old (!) friends and made some new.  Relaxed and big fires most nights.

We watched this heron shake this huge fish down its narrow neck.

One wet grey and windy day we caught the bus into Oxford with one of the ladies on the motorhome meet.  Her great uncle had been a Master at Pembroke College and had some Halls of Residence named after him.  He had been largely instrumental in the independence of Persia (I think!).  I was tour guide around the main city sights until, cold and hungry we took sanctuary in a pub.  Whilst half the menu items were off the menu, we had no choice but to stay as finding somewhere for 3 dogs had been challenging.

We spent 5 nights up in Yorkshire with the Aged P’s.  This trip came about as Mum fancied visiting RHS Harlow Carr Gardens, and I’d taken out membership for a year.  They were in a small family hotel and we were on their CS (5 pitches site) next door.  The family were originally sheep farmers and still kept rare breeds, but had diversified.  The vegetarian daughter doubled up as restaurant waitress, front of house and sheep farmer … she had lots of ‘old girls’ as she could bear to part with them.

The Aged P’s joined us for drinks and supper in the van.  Although we did eat in the hotel restaurant (the only dinners!) twice.  An ordinary menu, but superbly cooked.

RHS Harlow Carr on the one day that the forecasters suggested might not rain! On arrival we had coffee and cakes in Betty’s. Yummy. 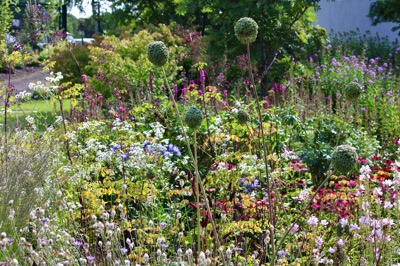 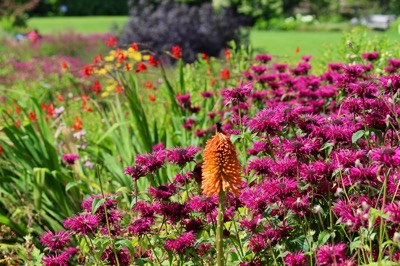 The next day was forecast to rain.  And it did.  But we booked the Rover ticket for the Keithly and Worth Valley Steam Railway, so were ‘ moistly’ dry.  https://kwvr.co.uk  Built by the textile mill owners to get their worsted cloth to the main railway line. A short railway with several stops, including museums, a vintage bus side shoot and The Railway Children film station.  An excellent day.  Lunch, eventually, was a quirky little cafe about to shut up.  I spotted some Lewis Chessmen high on a shelf, to be told no one else had recognised them … the owner’s father was having a late lunch too … he got them off the shelf … he’d carved them from a picture in book.  Some talented people.

Bronte Parsonage, Haworth https://www.bronte.org.uk  Small but fascinating.  Quite a lot about the family members who, even individually, were interesting to learn about. 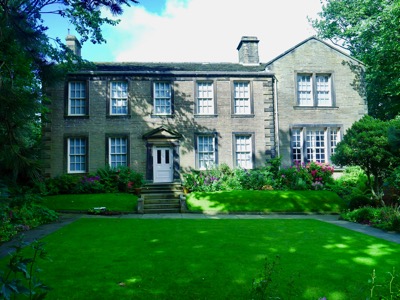 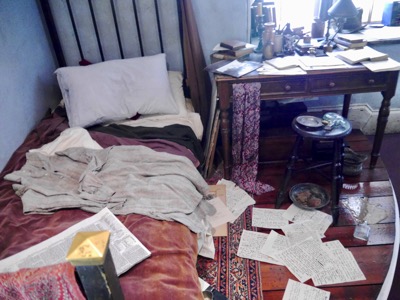 A teenagers’ bedroom … no brother Branwell’s room.  An intellectual and talented portrait painter who could find love or a career and descended into self pity and narcotics.

The Bradford Industrial Museum is housed in an old mill and run by the council, but free.  https://www.bradfordmuseums.org/venues/bradford-industrial-museum  A hotch patch of collections from cars, to engines, printing, mill worker houses through the ages etc. … but don’t expect a cafe, just a vending machine

We also discovered Skipton, and Mum and I went back one afternoon to do some Christmas shopping!  I know mad isn’t it … it’s still supposed to be summer!