Minibus, guide and drive arrived promptly at 8.00 Apparently we were the first tourists for the tour company since Covid and we were told the same thing when we stopped for Cay … a few Turkish day trippers only.  Normally this time of year is wall to wall tours … we saw a few other people at some of the monuments, but again we were very privileged to have them mostly to ourselves.

David’s Great Uncle had fought here, been wounded, gone onto fight in the European trenches, been wounded again … only to die from the Spanish Flu.  Consequently we concentrated on the Irish and British landing areas, down the South of the Gallipoli Peninsula.  We only had about 4.5 hours as we needed to get onto close to the Bulgarian border.  To be honest, with assimilating the information and dealing with the emotions, the time was enough.  I am sure we will return and spend time in the museums and at the Anzac fighting areas.

The Allies withdrew after 9 months leaving

The map showed the landing beaches, some very narrow, the target villages and higher ground that was supposed to be captured.  It looked like a very small geographic area that was held by the Allies.  It was a shock exactly how small the area when we looked down over it from one of the hills.

Turkish gun emplacements  either side of the Dardanelles …. the guns supplied by the Germans.  These and mines destroyed 6 Allies ships in March 1915 – the Turkish Canakkale Naval Victory.  The original plan had been to create a route up by Istanbul (Constantinople) to Russia, keeping Allied control of the waterway.  The land assault was Plan B.

The Turks revere the Gallipoli Peninsula is a National Park as a symbol of national pride … whilst the Generals may have been German, it was Turkish soldiers who repelled the invaders.  At the time, Turkey was the “Sick Man of Europe’.  At the outset of the war, Turkey was neutral, but Germany had freely supplied guns and equipment and Churchill had commandeered two battleships that Turkey had paid for (apparently!).

This chap was a forester and during the sea campaign, he found the strength to lift up the shells when the lifting gear broke.  His statue is found in various places.

Pic taken from the target hill the Allies never managed to take.  The opening of the Dardanelles is surprisingly narrow.  The pic does not show how small the geographic area was that the Allies managed to secure in 9 months of combat … and it was a really small area.

At the Turkish monument.  All the memorials had been shut for much of 2014 to be cleaned for the Centenary celebrations in 2015. 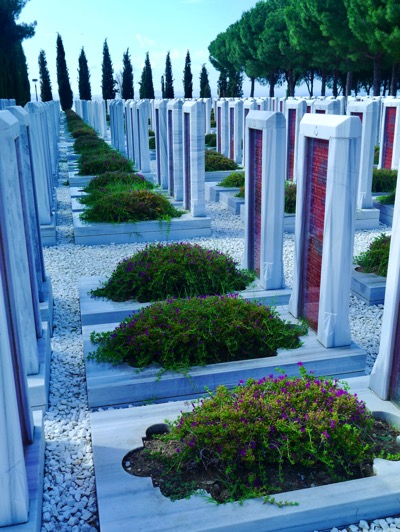 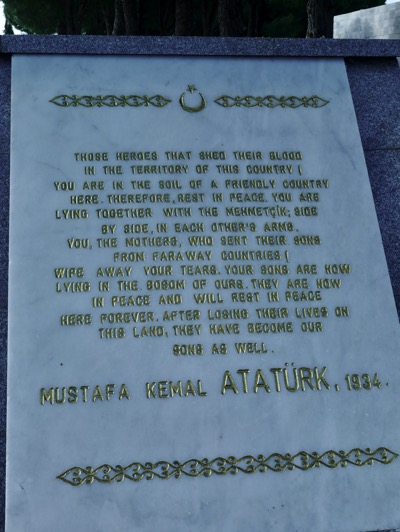 A moving speech by Mustafa Kemal, then a Commander of a Regiment … the future Ataturk. 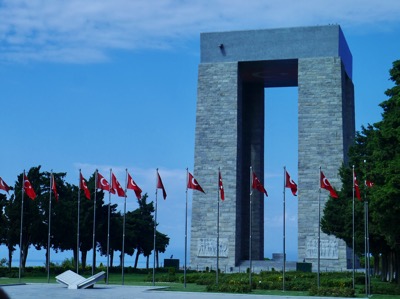 The Turkish memorial is visible for miles … 14.5 metres tall.  From most angles you can see 3 legs, representing the Turkish common male name Mehmet, meaning the one who praises. 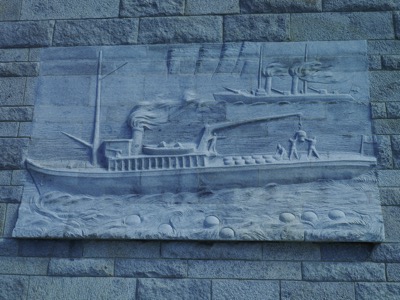 The Clyde steamer foundered on the rocks and small boats had to be used to create a bridge for the troops.  Hundreds were picked off by Turkish machine guns.

Allies Cenetary, with a lot of volunteer Irish.

Hellas Memorial:  honouring 20,000 British and Australians who were known to have died here, but have no known graves. 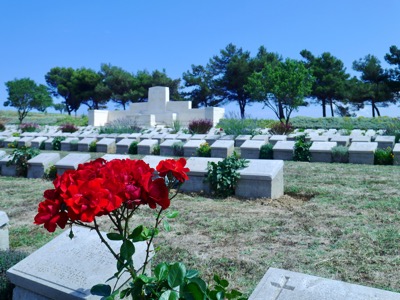 Lone Pine Cemetary with the most Austrian graves, where a 4 day battle left 7,000 dead.

The small Salim Mutlu War Museum mostly contained shrapnel and shells, but this display case showed how dense the number of shells was on the ground. 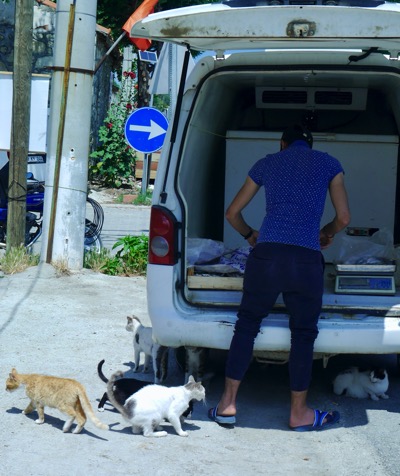 A bit of light relief at the end … cats ever hopeful around the fish van.