Aird Uig campsite – managed by Finn – we conversed in a mixture of Gallic and Gaeilge ! We also talked about 1960s music – Bob Dylan et al – top man – he only charged us £10 per night instead of £15!!!  (K:  Being of a certain vintage and Irish has some benefits!)  Walked to Gallan Head – cafe unmanned – with honesty box… we are truly in God’s country…

Over 200 service men stationed here during WWII.  The RAF left in the 1960’s and some of the buildings have now been bought and turned into small houses.  The Head was recently bought by the community who want to preserve it and make it more accessible.

Reef beach – the campsite is in the dunes just off to the right.  Completely made up of shells and Oscar and I collected some, including some unusual small bright pink ones.

747 – Tuesday 13th June:  Back into Harris and Distillery

Why do ginstilleries draw us inexorably? Harris gin distillery visit in Tarbert – tours all booked up but a nice tasting and appropriate purchase, of course…. Seaweed is used as a botanical but K used a pink grapefruit instead.  Jez was pointed to a nice small overnight beach spot near the Sealam Museum Centre – another quiet evening… 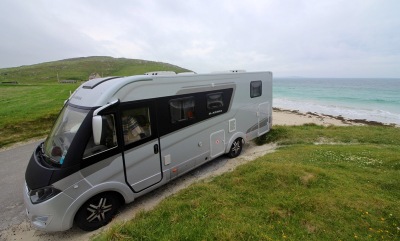 Our overnight at the edge of a slipway … busy with people collecting rope and wood, presumably to decorate their gardens.  K had a good chat with a local artist, wife and two small girls.  They try to grow their own food as much as possible but the winter winds kill their crops and they’re thinking about home ed. for the girls.

Sealam Centre – lots of information about families who emigrated to Canada, USA and Australia the – dreaded ‘clearances’. The town of Leverburgh brought rain and we considered a pub lunch but not at £15 per head, just for J’s scampi! It hd been recommended to us, but must have been an ‘ on-budget’ day!

Coming up to the east coast of Harris, called the Bays, the scenery changed to rocky and barren – not unlike Connemara – evidence of more ‘clearances’ people forced off their land to here to make way for landlords with large profitable sheep farms – fishing was an extra income option but it was barely subsistence living – and then the potato blight arrived to force more emigration – so Ireland wasn’t  the only country to suffer…

Stairs up so far in the tower, but the final level is only accused by a step ladder, which was missing.  Not that the views would’ve been much in the rain. 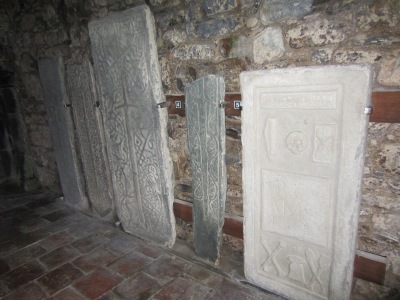 Lots of tombs to the MacLeod clan. 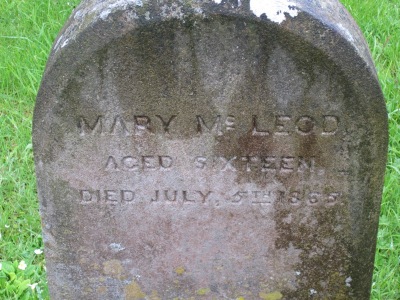 St Clement’s church graveyard contained a headstone marking the last resting place of Mary MacLeod who asked to be buried face down – ’to stop her lying mouth’ – why?   And only aged 16!

Unfertile rocky land where families tried to scratch a living.  This side of S Harris is now more notably home to artists and craftsmen.

Back to Skye across the Kyle of Lochaish Bridge – CL on the west bank of Loch Ness – services complete before a Wildcamping meet near inverness. Excellent morning run to a waterfall….

Weekend pilates for K and both Margarets – and running.  A group of us walked uphill (a lot) to meet our group from the other direction at the halfway point.  Evening saw food and music – harpist and Adrian from Holland playing Scottish bagpipes – and the combo of moi, Shirley and Margaret singing along to some old classics – my chords were OK after a 50 year absence form the guitar!  Another ‘late’ night…. (K:  Funnily enough, J seemed to slope off before me!)

Lunch at the Dore’s Inn – Scampi and chips for me and soup for K, followed by most excellent puds.  K and Shirley walked to Flichty House to check out brother Tim’s garden – impressive.  A lovely meet with some top people and over £800 raised for the Neil MacKenzie Trust.

As we faced a 4.5 hour drive tomorrow, west off at 5:00 pm to make most of the journey tonight – Lybster Harbour welcomed us for the night – peacefully, as always….. zzzzzs

Walk … clever mini bus manoevering … drop one lot of walkers at the start and the second lot at the end.  We weren’t sure if we’d been given all the uphill! 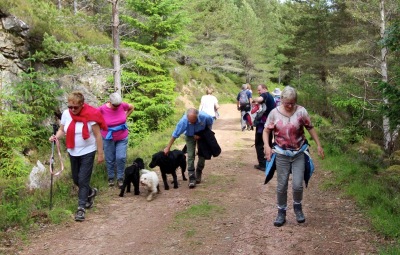 Still going uphill as we passed the other party and remembered to hand over the mini bus keys. 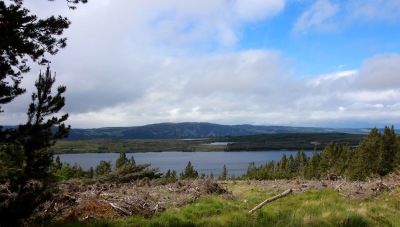 Great Views at the top and then it was finally downhill :). 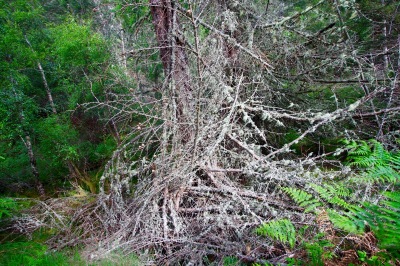 Celtic Harp came to entertain us.

And our very own James, Margaret and Shirley.

Our overnight at Lybster Harbour.