So with no news of the MH, we are making the most of the hire car and heading up to the hills and along the coast for the next few days.

Steep ‘walk’ up to the village of Occi – not a ruined ice cream shop in sight!  But another amazing belvedere…..

Aregno beach was our sit down al fresco lunch – healthy soup and crisps….

Worth the climb up for the views of the Gulf of Calvi and valley. 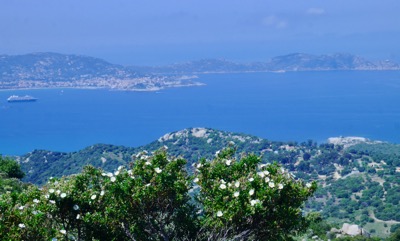 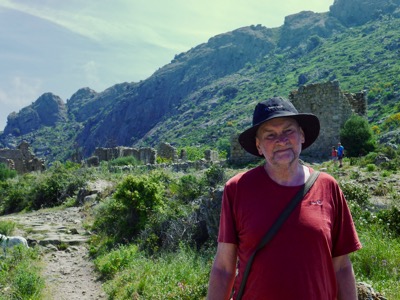 She is a mountain dog after all!  We’ve just about stopped worrying about her and cliff edges. 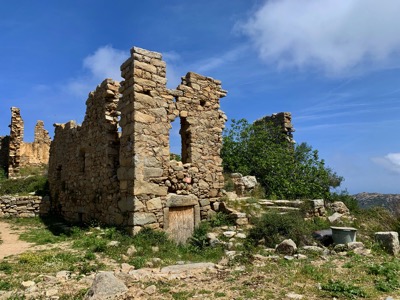 Occi was last inhabited in 1914, but had been a settlement since C15. 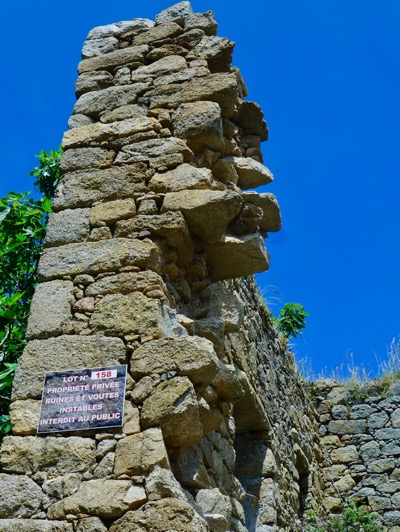 Crumblng, but still owned by individuals. 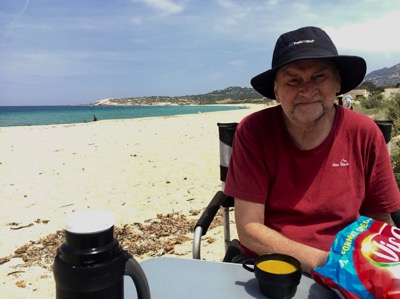 Picnic lunch on the beach.  We had taken the table and chairs out of Jez … no sandy bottoms for us!  And OK, it was a huge bag of crisps, but a healthy soup!

Algajola with the citadel that is now used for admin.  A wander around and a ruinous-to-thighs ice cream!   Nelson assailed the town in 1790.

A day I remember mad cap Nicky Moss, who would have been 54 today.

I’d taken down a list of pretty hill towns from the guide books and fashioned a route.  The towns were very pretty, perched on the top of hills and joined together by bendy roads.  They have mostly started to blur in memory into narrow crooked lanes with great views.

Pigna stood out, as the Mayor had encouraged artists and crafts people to move in.  There was also a music school and auditorium with a busy schedule of events.  It was very busy compared to the other hill towns.  I was treated to a group of men practising their Polyphonic (male Corscian style a cappella) as I left one shop.

We pulled over the the old wine press (closed) and had to reverse or carry on with a donkey on our bonnet! 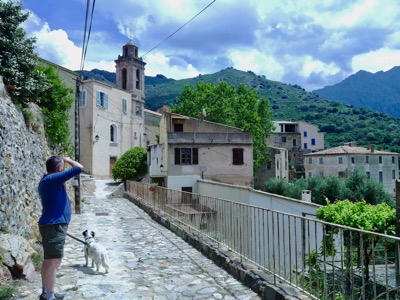 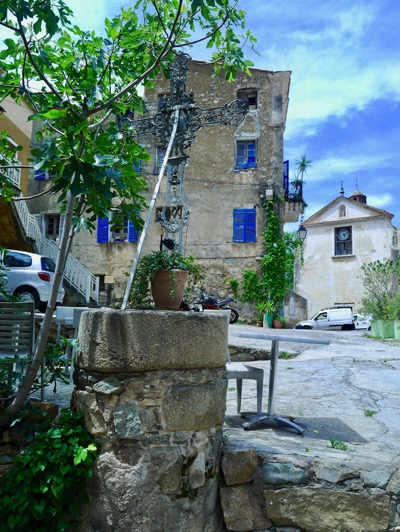 Coffee stop … just ‘cos we needed to use the facilities! 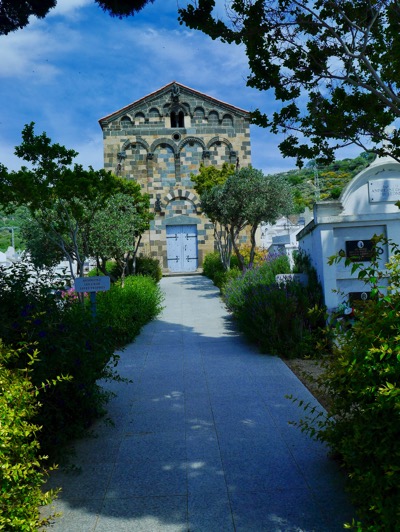 White, green and ochre stone with primitive figure over the door.

Well preserved frescos (or well touched up) of the 4 Doctors of the church, all holding a bible 1458. 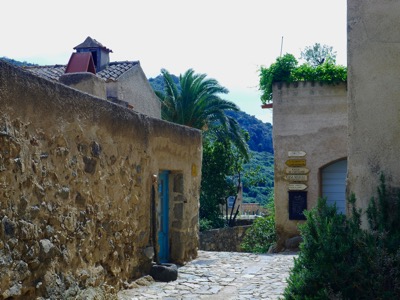 Pigna … quite a few pix…. fairly typical of most of the hill towns, but more so… 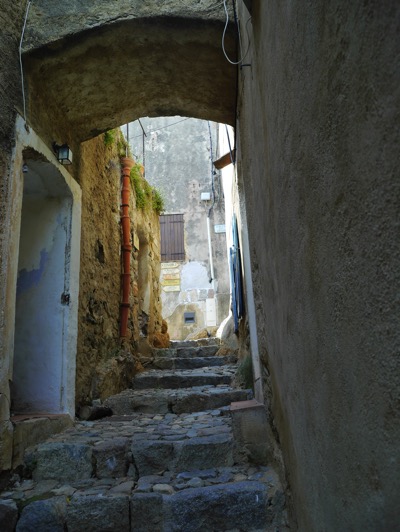 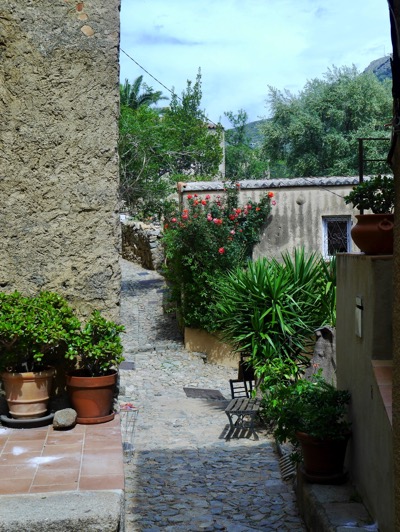 A coastal drive south today,  Beach with mussel-type blue flotsam – Corrie fancied noshing some but we discouraged her.  Discounted chocolate biscuits (x2) had mysteriously attached themselves to K’s shopping basket (a regular occurrence)… but perfect with our flask of coffee.  Great stop as we were the only people on the whole long beach.  We then walked the beach to the campsite at the end.  We had to walk through it to get back to the road and it seemed strange that it was not open.  On exiting, I read the notice in the office window.  The ocarina’s council had shut it down due to risk of flooding for the dam in 2017.  A massive blow I’m sure to the owners.

Over the other side of the road, we wandered up a track towards another ruin … an abandoned silver mine.  Of course, we are silver mine experts now having been to one in the Harz Mountains only weeks back.  Only this one was not a museum site, just abandoned derelict building and a reservoir / dam that we could wander over.  On the way in, we struck up conversation with a chap who seemed to live in the former manager’s house … the British had worked here until the outbreak of WW1, the French continued until 1918, when the silver was exhausted.  He explained he used to work in the very good campsite, but the authorities … bah!  There is no fear of the dam bursing and flooding the campsite!

And these shaped like mussels, but wafer thin and stuck together in clumps.  Corrie attempted to consume some.

Coffee stop with the beach to ourselves.

A sneaky discounted packet of biscuits leapt into my trolley … but what have the marbles on the packaging to do with anything? 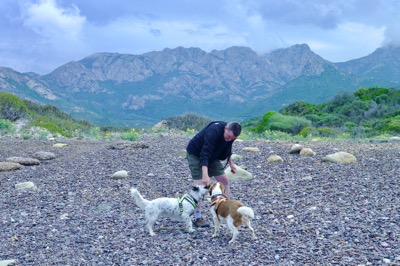 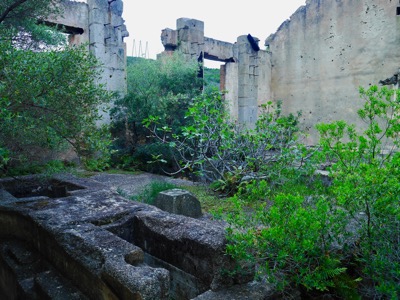 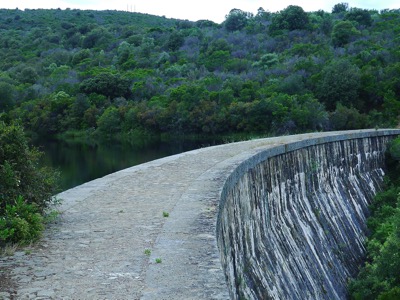 Looks solid enough to us, but what do we know!

Signs in the campsite …. run one way for fire and another in case of flooding!

Still no news on the MH … calls so far with UK, France and Italy … at least twice daily!!

A drizzly, cold day.  Nothing for it but to go to lunch, using the Lunch Voucher my Aged P’s had deposited in our bank account to cheer us up over the Jez problems.  And it certainly did.  Feeling much loved.  We went for the set menu, which had a good choice … and 1 litre of red to wash it down.  After the meal, the sun made an appearance and we (or I!!) dragged ourselves up the steps to the top of the citadel and then back down again … just because! 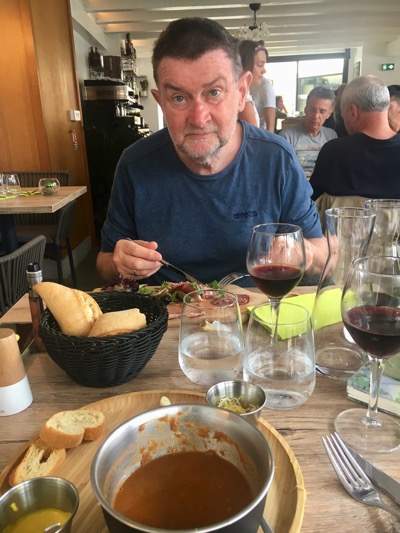 Climbed up the outside of the citadel, just because it seemed like a good idea at the time!

An early start and walk into Calvi to catch the train that hugs the coast, where there is no road to Ile Rousse.  We’d seen people standing on the train the other day, so our theory was that if we got on at the start of the line, we stood a better chance of bagging a seat.  Picked up To Go coffee and onto the train … heading for the furthest carriage with fewer people boarding.  Mistake … the reason all the people were climbing into carriage 1, was because this one had seats.  So we were standing after all.  But we were the only ones with coffee 🙂

When I’d checked, on a previous day, about dogs on the train, i’d been told, no charge, but they must wear a muzzle.  Fortunately, we’d purchased some earlier this trip, but not wanted to upset the dogs by making them wear them, so it was a new one and a confusing one to CO2 to have to wear them.  When I bought the tickets, I was again reminded about muzzles and the conductor also said I had to keep them on, so we did.  A group of French men (arrived on a friend’s yacht) next to us on the train were suitably sorry of CO2 and made a big fuss of them.  As we alighted, we noticed other dogs … but no muzzle.  So on the return leg, we left the muzzles off … the conductor came along, petted CO2 and said diddly squat about muzzles.  We remind ourselves … this is France … rules are there to be broken!

Ile Rousse is described as the St Tropez of Corsica … NOT, we think.  A bit dull and nothing like as pretty or large as Calvi.  I climbed up to the lighthouse and Genovese tower, we lunched by the covered market to get out of the sun (good excuse, but CO2 were flagging) and then the wind got up.  We walked and dozed on the beach until the return train.  We won’t be back.  The train ride was worth the EUR12 for the pretty coves and beaches we passed. 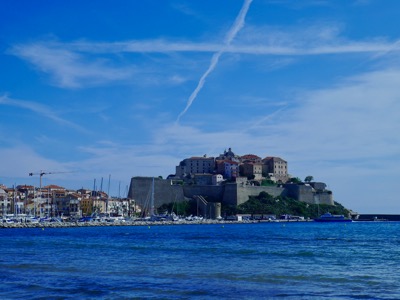 Views from the train… 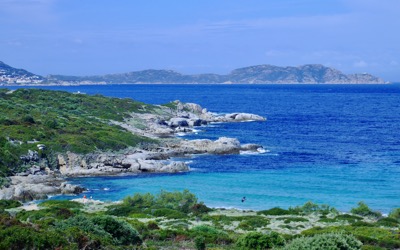 Amazing varied plants along the coast.

These little trains get everywhere … but it crawled up and down to the lighthouse.