We completed our services before we left the Laxendale campsite – unfortunately, I lifted the grey waste manhole cover a bit quick and dropped it on my finger – the one we caught in the hab door in France!  I think I said “goodness gracious” with a bit of “feck” thrown in…. this after K had sliced her finger nail into the white cabbage a few days ago. At work (what’s that?), we hade a spate of hand injuries and introduced compulsory safety gloves – should we?  My guitar playing is on hold for some days – but we applied the magic Arnica cream and the Mebo gel from Jordan.

Stornoway Lewis Castle Museum was free – and hugely informative – again, amazing staff.   En route to the western side of Lewis, we continued listening to the audio version of Peter May’s book, “The Black House” – set in Lewis exactly where we are headed – a real local flavour…  the Ness Historical Centre was also a must. For the night’s ‘wilding’ we looked at Ness Port but it was far too windy – so back a short drive to Eoropaidh – secluded spot in front of a children’s play area – with mini golf – and a donation box. Perfect pitch but still windy – all portholes closed for the night…

K’s – Never did find the missing bit of nail amongst the cabbage!

The Eoropaidh Dunes Play Park, complete with a pirates ship and 3 hole mini golf course!  Respectfully asked to not use on a Sunday.  Also sign up to mind the uneven ground and the rabbit holes … the rabbits seem to be bigger here than on Harris.

I walked Oscar up to the tiny chapel … shut, but I could see through … bare stone walls and ancient wooden pews.  A small stained glass window over the alter.

Back to am running – why not in such awesome surroundings!  A good breezy walk also for 2 hours along the headland – to the most north westerly point in Europe!  Stevenson-built red brick lighthouse – needed no paint protection since 1885…  Visited the restored Black House – large and very roomy – heated by a 24 hour turf fire – black smoke everywhere – hence the name.  The replacement houses were called ‘white houses’.  Apparently the family of this black house moved back in, letting out their white house as it leaked, flooded and was draughty … progress!  Along the road is a Whalebone gated house entrance – immense

Lovely small campsite for the night – hardly any breeze – laundry, blogging – and chilling – La Dolce Vita – or what?

“I feel the need to make an interKection at this point – with my owners’ recent digitantix, I am keeping my paws neatly wrapped in gaffa tape!  Oh shit – how do I scratch my balls, now?  Bugger, how does one remove gaff tape?  I can’t even Koogle the answer – there’s no Kifi connection!  La Dolke Rita, indeed!!!!”

K:  Oscar if you use language like that, I’ll gaffa tape your shnout – that lingo is owt!!!

The bus shelters protect from wind in any direction.  They need to as the wind, Margaret assured me, circles in Scotland … true you cannot get a leeward side.  The Peter May book said the locals call them Giants’ Picnic Tables.

The start of our walk. 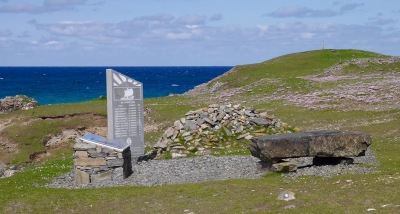 A memorial to the 12 fishermen who lost their lives late C19, leaving 9 widows and 22 children with no means of support.  It was especially poignant as it happened in daylight with the villagers watching from shore.  They attempted to launch rescue boat but the undertow almost took that crew too.  One chap was seem to be hanging onto some wood for 2 hours, wiping the salt from his eyes and mouth, until he too, finally slipped away. 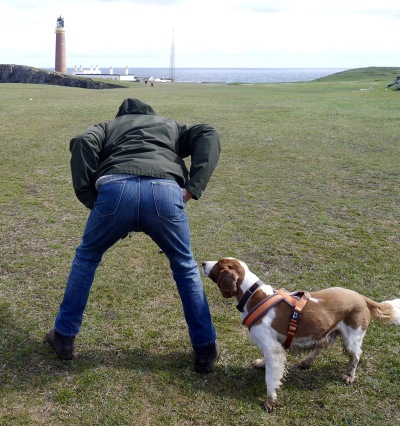 Oscar inspects the Best Butt of Lewis!  He refused to do a moony!  I suggested we both do one and ask fellow walkers to take the pic … but strange, he wasn’t up for that either!

Sniffing the peat turf … bringing back memories of turf cutting as a child in Ireland. 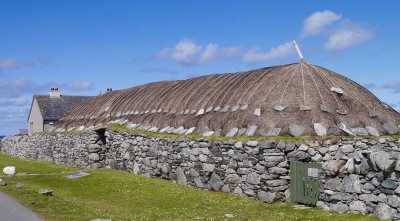 Huge whale jaw bones.  Apparently the blacksmith was seriously injured removing the unexploded harpoon, which is now Damocles Sword like, above J’s head!

An immaculate campsite with a pleasant view – the grass was artificial!  Full serviced pitches and washing load done!

On our way to ancient settlements, we spied a man in a field with a bird of prey – stopped to have a look from Jez. To our amazement, he called us over – to have free personal interactive demo! K obliged and I took photos… One of those truly ’gemstone’ encounters – huge thanks to Ian. We met him again on the road after our village visit, hitching a lift, but we were turning off the road in 200 yds.  The mill/kiln, iron age fort and the blackhouse village visits were inspirational – bonus for Oscar – he was allowed to come along, too.   The Callanish Stones are really special – Stonehenge-esque but bigger over 3 sites – and completely free to enter. And no fences so we can get up close.  Indeed the cattle did to Callanish Stones III, churning up the soil by this ancient monument!  Again, spectacular sunsets – lots of folk capturing the images – up to 11:00 pm!  We overnighted right beside the Stones with a German van for company – try staying at Stonehenge overnight free in your motorhome!

What a busy and amazing day!

Norse Mill and Kiln: barley grain into meal powered by a diverted stream … a left over of the Scandinavian past of Lewis.

We stopped off at the Blue Pig gallery as I’m always looking for gifts … I treated myself … again.  The knitter takes local pix and then chooses the colours and patterns to reflect the image.  Most were inspired by the coast and seaweed and “Easter Snow” inspired me into a purchase! 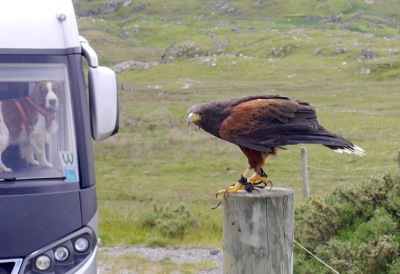 OK, so how often do you see someone training a Harris Hawk in a field, pull over to watch and then then get asked “Who’s first?”  An absolutely phenomenal piece of luck … J not keen as worried about the bird on his injured finger, so I got all the goes!  Ian wants to set up Falconry experiences on the island.  Oscar was not amused! 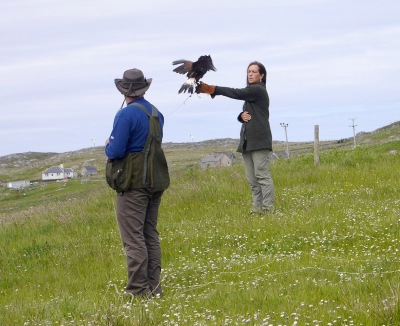 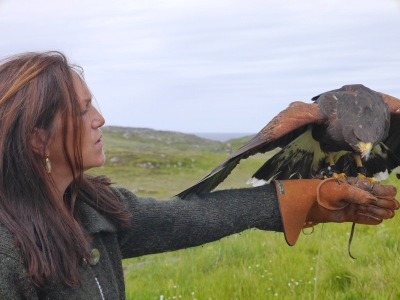 Gearrannan Blackhouse Village:  restored cottages – some are to rent.  There were informative films about Harris Tweed production and turf cutting. 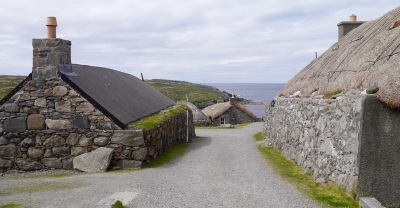 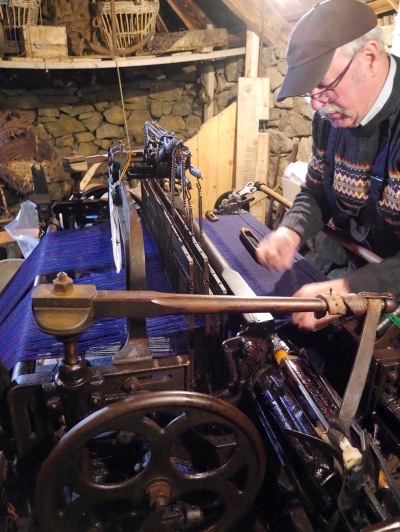 The black faced local sheep are no longer used to make the tweed as consumers want softer and lighter cloths, so Cheviot wool is brought onto the island but carded, dyed and woven here, to make it authentic Harris Tweed.

There are remains of blackhouses all over the island.

Carolway Broch: An Iron Age fort.  The iron age lasted longer up here as the Romans did not make it this far.  Brochs are only found in Scotland and this is one of the best preserved.

They are made from two concentric circles with stairs between the walls to what would have been three floors. 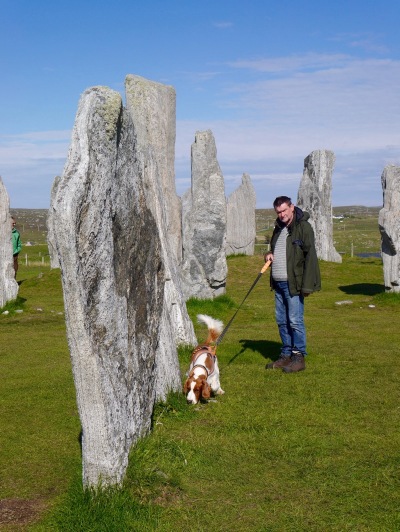 Callanish Stones:  5,000 years old.  One of the most significant and important megalithic complexes in Europe and we had to stop Oscar from peeing on it!

Two satellite sets of stones are walking distance from the main stones … Callanish II has good views up to Callanish I. 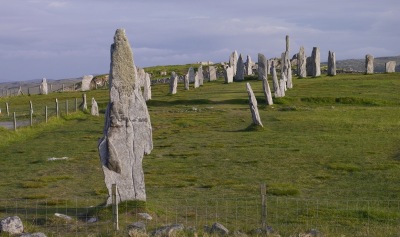 We moved Jez to park up for the night right next to the stones … so close this view was taken out of the roof light!

We were not the only evening visitors waiting for the sun to set, but at least we were in the warm until 10.38 … we could could’ve made a fortune selling hot toddies as the wind was bitter.

Over a bridge to Eillean Bernera – the locals succeeded in getting the bridge built by threatening to blast rock for a causeway – innovative?  Our nights stop was at Bosta beach – how many times have we used the word ‘stunning’?  Lots and we expect to continue in the same vein.  Sun, sea, sand – lovely neighbours – sitting outside with wine – how much more can we ask for?  The photos speak (again) for themselves – the site is so popular that 9 vans were with us overnight… many small campers as there was a water tap and toilets.  Our walk to the next village was nicely up and down – we needed to guide Oscar past a serious ram with horns that would have made a giant corkscrew/wine bottle opener.

We visited a Iron Age house which had been buried under tons of sand – hence well preserved – a guide who ‘lived’ the story and brought the detail to life. K wants to buy it for when Mr Trump uses the atom bomb to wipe out the planet – our personal air raid shelter!  Our van neighbours live on Hoy next to Orkney and they invited us to visit in the next couple of weeks – fantastic – thanks, Catherine and Michael!  The colours of the sunset were blue, gold and white with the dark dunes beneath…

Another amazing view from Jez.

In 1992 a storm removed a lot of sand from the beach revealing a stone wall … this led to the identification and excavation of some of the iron age houses that had remained hidden.  One was beneath a Viking house.  The houses were round and built underground, with only the roof showing.  All the walls were still intact and when they built the replica further up the beach they were able to work out many of the building techniques and how the buildings had been used. As usual, it is the staff that make the difference … a local lady opens up the house foe visitors only Monday – Friday 12.00-4.00 in the summer and was very informative and enthusiastic.  She pops down a couple of times in winter to light a big turf fire and air it.

Not to be messed with … Oscar was promptly put on the lead.

The beach has now totally covered over the iron age settlement … probably the best conservation for it.

Views of our walk.

Oscar was not amused when he fell into the muddy bog.

Our cup floweth over again … sitting, for once, protected from the wind, in sunshine, with an amazing view and a glass of wine.  What more can one ask for?

Our view of the setting sun.

Another day – another part of Lewis – Uig – another adventure….  How could we be blasé about all this?  Some people ask (when they learn we are full-time) – are we not bored?  Our answer is always emphatic!  Bob Dylan – “The answer is blowing in the wind”.

We are on our own overnight on a small pitch overlooking the sea, beach and the hills beyond.  Who sang “The hills are alive – with the sound of music”? Answers on a post card to – “Jez, Outer Hebrides, Heaven”!!!

Me again, readers. Today, they made me swim! In the ocean!  It was 50 fathoms deep with whales and sharks (I’m sure I saw Jonah)!  When I dragged my near drowned body from the briny, I rightly shook myself over K and jumped up at her in relief.  What did she do in her gratitude?  Tell me off and said “you little fecker”.  I’m taking her to the Hebridean Court of K9 Bites!  I’ve appointed my lawyer – Mr Anguish McFarts – of McFarts, Bizzybizzy and McPoos, from – Kolihull, my home town.

OK, so just a small river to wade across.  We removed socks and boots only for this.

Our view from Jez … just as well we came back from our walk when we did … we’d have had to swimif we’d left it another 30 minutes.  As it was, the tide was coming in the small river and we had to remove trousers and wade across.  Much to the amusement of the two couples drinking wine on the deck of a holiday cottage … we again considered doing a moony!