We motorwayed from the Siena parking – picking up some breakfast along the way and refreshing our services en route…. some 3 hours later, we arrived at the campsite that K had picked out. The road in/up to the site looked very narrow – I did a recce and spoke to the site team – some doubt expressed about an 8 metre van negotiating their twisting lane…. then with myself and a chap from the site guiding K as driver, we made it up the hill – to the most expensive campsite on planet Earth (or in Italy) – Euro 36 per night!   Reluctantly, we parked – the area is a tourist trap – and it’s Easter…..  About 50/50 Italians and Germans … they can afford these site fees!

Under a greying sky, a tour of the town was de rigeur and off we went – the campsite didn’t charge us for walking on their road!  Nice enough seafront promenade – possible running route for the morrow.   Then, a little moment – a procession and marching band in medieval costumes – lovely.  K captured this angelic chappie swirling his flag – he looks a bit serious – does he know those are the colours of my local football team in Dublin?  We’ll recognise him in 20 years time – when he will be centre forward for Italy (James – you’re showing your age – what’s a centre forward ?)

The rain came – and we retreated to our £ucsious campsite – with fairly decent £oos… this could go on and on… £ots of vans parked c£everly very c£ose together – enough ! 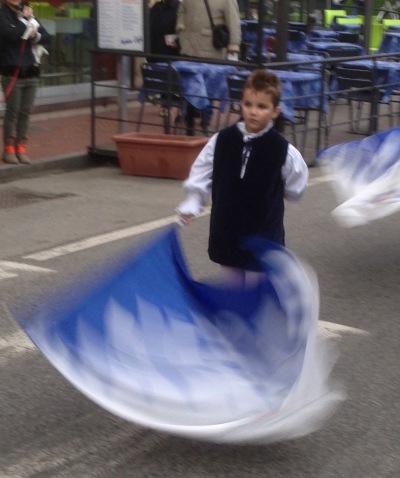 There is a saying in Italy – “persona qui pedant 500 pedes – descende on arse!”  It’s a recent saying – from today, actually…more later on that.  We Trenitaia’d from £evanto to Consiglia to start the Cinque Terre walk – 3-4 hours estimated by the Tourist Office – quite accurate in our case.  The photos give a good idea of the climbing – the paths were ok-ish in places – however, it must be said that in UK these paths would have been condemned on health and safety grounds. Which is better? Open a path that is narrow and steep with sheer edges – and trust people to be sensible – or close anything that hints of danger? We know the answer – perhaps Italy is not yet wildly litigious on h&s issues…? There was one sign we spotted at the end of the walk “Walking in the park is not recommended during bad weather”.  Oops – it had rained all night and half the morning!  And was very slippery … justification for what happened anon?!

Including a climb of 600 feet (sounds more impressive than 200 metres), we reached Vernazza – jam packed with tourists (it is a public holiday, after all) – and found a spot on the harbour wall to eat lunch – K’s pasta dish and fruit – plenty.  Second leg of trip – more ascending and ascending… spectacular views – some (not just me) quite mature folk walking the route. We had to remark on the wide range of unsuitable footwear on display – everything from flimsy plimsolls (another old word, James) to shoes with heels and suede boots!  Narrower paths – folk being polite in showing passing decorum (isn’t decorum a lovely word?  Decorous decorum decorated decadent descending dallies!)   The path was often so narrow that one waited to allow people to pass.  K asked J what the most common word spoken was .. “Feck” was the answer … No, said K … “Grazie” in a plethora of Italian and very non Italian accents.

On one section, it was necessary (I swear it) to become quite intimate with passing members of the opposite gender – purely in the interests of – yes, decorum!  A bit like pressing flowers – or, as the Roman might have said – “intimosa floribundance”!  Then came the ‘floribumdance’!  I was blocked by a group of young folk who were not displaying decorum – so I sidestepped and walked on a more slippy side of the path – the ground came up to meet my nether regions – two body bounces and a couple of scratches as a result of the descendarse method… K called for the air ambulance – I was winched up and shot off to the local arsepedale…actually, we nonchalarsely kept on walking – stiff upper lip – and bottom!

Down some very steep steps, and Monterosso reached out to us – with red wine and ice cream!

An excellent walk – stirring views – another superb day – sadly, amongst the last of our present stay in Italy…

The initial steps up from the train station at Corniglia, along with the masses. 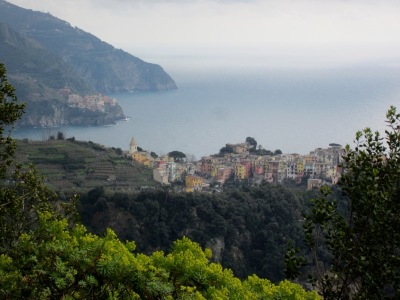 We came from here…

Nets in situ to ready for the olive harvest. 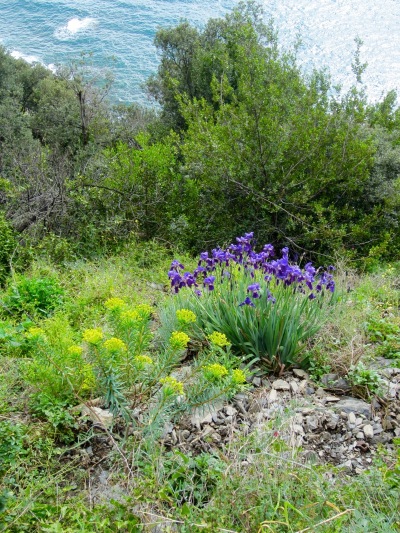 Euphorbia and Irises – lots of Spring blossoms and flowers.

Picnic spot at Vernazza in sight.

Nearly all American tourists … a lot of gelato being consumed (not connected!).

Looking back at Vernazzo as we embark on stage 2 of the walk.

No question as to why the Cinque Terre is such a draw for so many tourists. 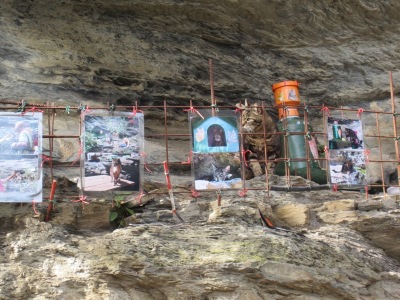 A cat sanctuary en route … with a notice asking people to feed the cats with the food provided in a bin. 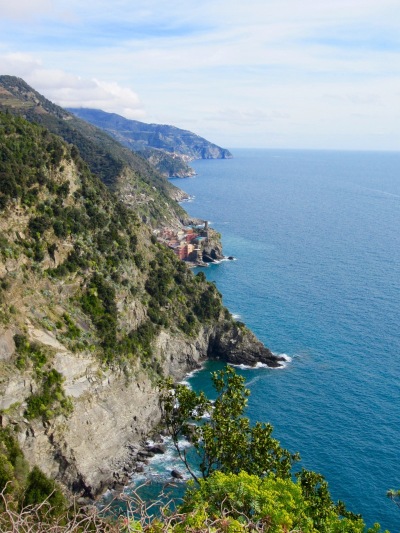 And we came from here too … but you can see how steep the cliffs are.

Monterosso and the train station in sight.  As well as olives, the cliffs also nurture vines … the farmers use mono rails to get up and down the slopes.