A leisurely departure from Gouda to the DenHaag Camper Platz, to be greeted by a huge metal gate, an ebullient hostess and strict dog rules.  BUT they do allow two dogs, have showers and are cycling distance from both Delft and Den Haag.  The site is a flat (no surprise there, we are in the Netherlands) open expanse with a motorway on two sides, so not the prettiest.  We elected not to pay for hook up and give our new lithium leisure batteries a good test.  The result is that we cannot harvest a fraction of what our new solar panels are producing with only sunny-ish weather.  We just don’t use enough electric.  Should we be running the fridge and hot water from our leisure batteries as the next investment in the van?

The afternoon was spent hand washing underwear and using the site machine for laundry … didn’t like to get  the twin tub out here.  A goodly breeze 🙂

We found James Willy Boulevard in Antibes and now this on today’s short journey.

We checked the weather and mindful of how cold we’d been in Rotterdam, and knowing how it feels a lot colder on bike, we seriously up.  My thermal leggings came out.  We took turns in the Mauritshuis, which had free wifi, so you could download a tour of highlights.  It was a good size, i.e. not too big, so you could actually take in the paintings and not just have a retina image for a nano second.

We joined a walking tour … but it was far too large a group, the guide had superb English but was softly spoken and didn’t add to our Dutch history knowledge.  Quite a few Brazilians on the tour who are working in Amsterdam … they had all independently descended on Den Haag.

The Mauritzhuis … C17 building housing a collection started by William V of Orange.

Perhaps the Maurithuis’ most famous painting – The Girl with the Pearl Ear ring by Johannes Vermeer C17. Her eyes really do follow you.

Jan Steen drew on bawdy humour.  He was brought up in a bar and his father was an art dealer … it is thought the young lad being taught to smoke was his younger self. 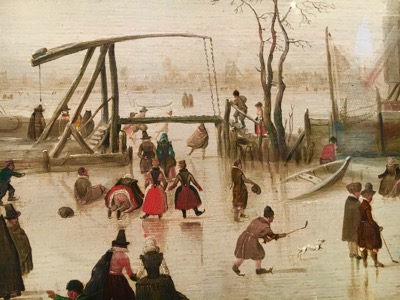 Another Van Steen … check out the lady who has fallen over on the ice … she forgot to put on her knickers! 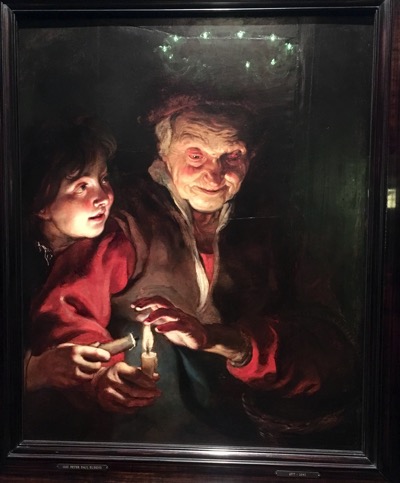 Peter Paul Reubens Old Woman and a Boy with Candles. 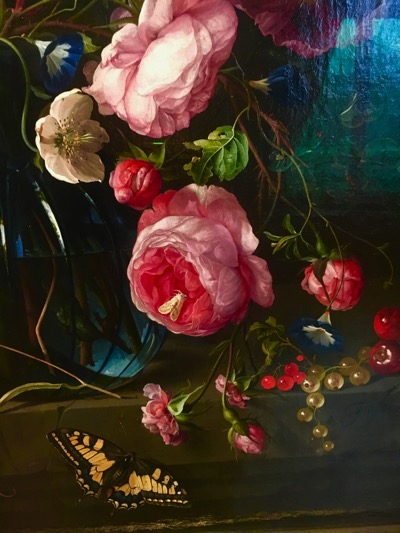 This is just a tiny corner of a still life … such attention to detail.

Hans Holbein the Younger painted Henry VIII of England’s falconer and was offered a place at court, but he declined. 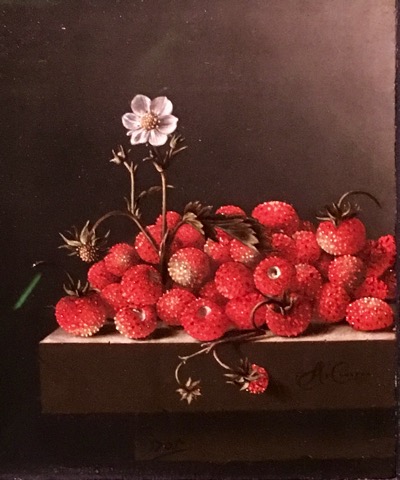 Just liked this one. 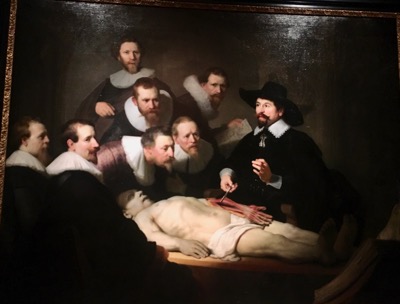 And now for Rembrandt.  We’d visited the house in Amsterdam where he lived, worked and taught.  It is 350 years since his death, so the Mauritshuis had all his paintings that they own on display.

The Anatomy Lesson of Dr Nicolaes Tilp 1632.  Rembrandt was only 26.  At one point this hung in the greasy kitchen of Amsterdam’s Surgeons Guildhall. 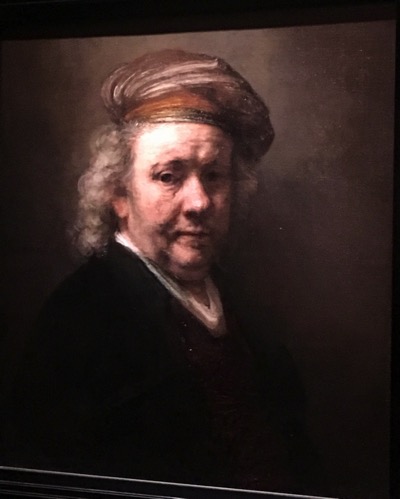 And my favourite – we have a copy hanging in one of the bedrooms in Combe Martin.  Carel Fabritus’ The Goldfinch.  He was killed in a gunpowder magazine explosion in Delft aged 32.  He was considered Rembradt’s most talented student.

The small octagonal building is the President’s cosy office.  An island off to the right had hemp seeds scatted onto it, which then grew (and were quickly removed) as part of the protest against recent anti pot smoking legislation.

The Hotel Indes, where the ballet dancer Pavlova died … or natural causes we were told, nothing to do with eating too much pudding!

Above the central lamppost is the Union Jack, flying outside the British Embassy.  It burned out in 2015 by a disgruntled security employee who had a drink and drugs addiction.  Perhaps the Netherlands was not the ideal posting for him!

Haagse Harry: a cartoon character who represented the voice of the working class.  Pot smoking, football hooligan but with a heart of gold.Not sure why he had to have a dump in public, but being responsible dog owners, we always carry spare poo bags! 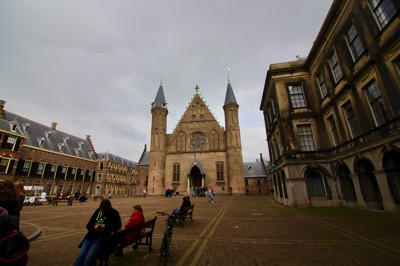 The Binnenhof … site of the medieval fortress and home to the Dutch parliament until they felt the buildings did not reflect their status and they moved to a flashy extension next door in 1992.

A super sunny day today “).  No thermals!  We cycled in the other direction to Delft.  Using a phone app we did our own walking tour.

The Vermeer Visitor Centre was one of the main sights.  Despite the fact that Vermeer lived all his life in Delft, the town does not have a single one of his paintings, and very little is known of him.  The are a LOT of authorship questions over his paintings.  A number had other artists’ signatures on them.  Vermeer did not sign all his work.  A 1930’s forger created a few more!  He was only discovered when accused collaborating with the Germans … he claimed he passed them forgeries, so was not collaborating! Currently there are 36 paintings that are said to be true Vermeers, but then even a few of these have a big ?.  The Centre had digital prints of all 36 works, BUT they were smooth flat and as a result lost a lot of the detail and depth of a relief.  Lovely to see how he always had the light from the left, used the same models, room and clothing.

I like porcelain, and a must do for me was a Delft factory, so we headed out to Royal Delft.  A very slick display of their work and then you can walk through the factory.  Being the weekend, you could see the work benches, but no work being done.

Bikes chained up outside the Old Church.  It takes us a full 10 minutes to get the dogs out of the Os-car and tied up, and then get our 5 locks in place.  We ain’t taking any risks with these babies!

The New Church, rebuilt after in 1536 and then the gunpowder explosion a century later.  Inside is the private mausoleum for the Royal Family.  William the Silent’s elaborate mausoleum is on display.  A 100 metre spire; sadly we couldn’t go in or up as it was Sunday. 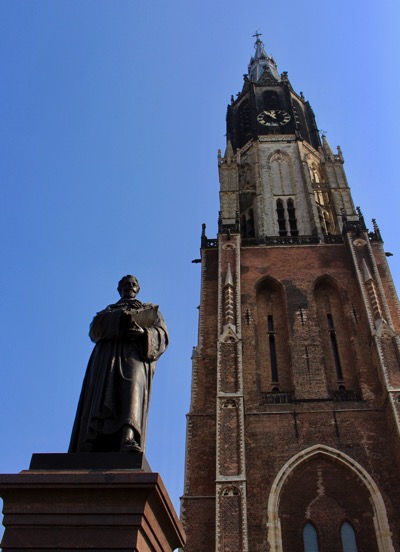 Town Hall the other end of the Market Place. 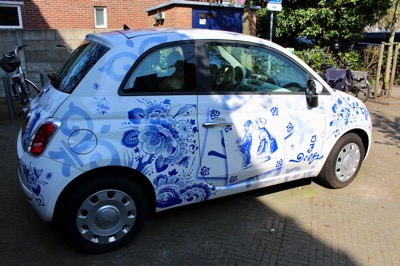 Think the clue to the fact we’ve arrived at Royal Delft is here.

A Delft blue copy of one of Vermeer’s paintings.

This display likened the frenzied trade in tulip bulbs like the Bitcoin explosion.  Bulbs were traded for silly money, such as a bag of 100 bulbs was swapped for a coach and horses.

Having seen so many beautiful tiles in Portugal, I was disappointed to learn that Delft closed its structural production arm in 1990, including the tiles.  I had thought I’d buy a picture made up of tiles, BUT a single small tile would have set me back EUR59!!!

The factory moved out of the centre of town in the early 1900’s and show cased its own architectural work.

As it was Sunday, the factory was closed and a solitary worker demonstrated how the black pigment is mixed with water and painted between the lines of a stencil.  The blue colour appears after firing. 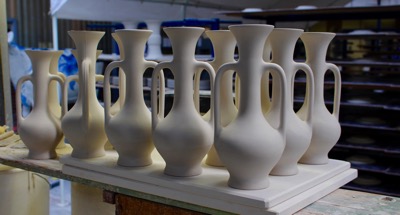 I think the Panorama Mesdag was the Delft / Dresden highlight for me.  Panoramas were popular in late 1800’s, but by the turn of the century, most had been cut up.  People climbed dark stairs, and them emerged into the light of the panorama.  Standing on a central platform you walk around 360 looking at the view.  Explanation of the making is in the first image below.  It was unvarnished, so as not to have a sheen.  The top and bottom are hidden from view (sand dune and roof over the viewing platform, so it disguises the canvas edges.   Our campsite host explained that as the panorama uses natural light above the viewing platform, the look of the painting differs through the seasons.  I was lucky enough to have the viewing platform to myself for about 10 mins.  Really quite magical.

Note to self, ask how much a cafe charges for cake!  Two coffees and small cake was EUR24!  No tip given!

We cycled on past the Peace Palace, had a picnic and then headed for the coast.  It was as if the Dementors were descending … swirling damp mist and a chill.  By the time we got to coast, it was a pea super!  About 7C cooler than the city.  I still managed an ice cream, whilst J had a warming coffee.  The dogs have not been off lead much, as there is a real lack of places to walk them without causing a bicycle incident … they went ballistic on the beach. 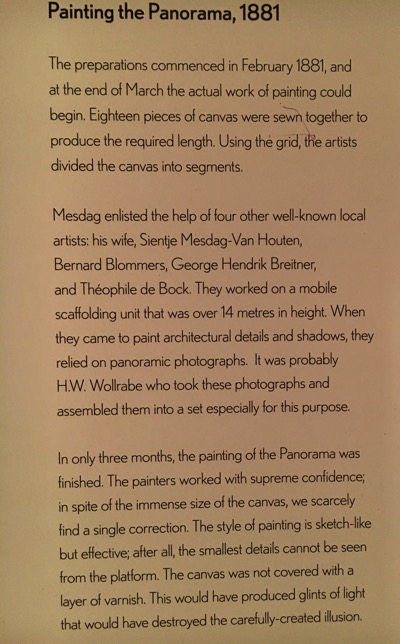 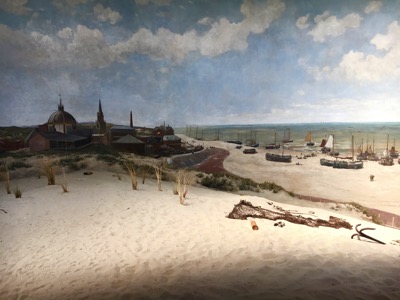 The Peace Flame:  fire from lots of countries combined.

The Peace Palace, opened in 1913 and we know what happened in 1914.  Also the International Court of Justice. 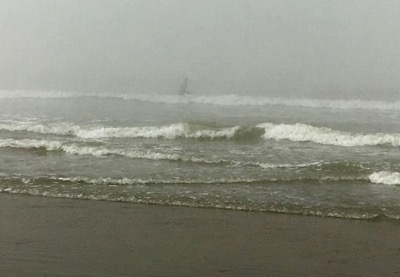 Just as well we’d seen the sea  and town of Schweningen in the Panorama, as you couldn’t  see the sea for the mist, unless you were right on the water’s edge.  A spooky figure suddenly emerged … he was carrying a huge camera and catching the waves breaking.