A crack of dawn start and a walk to the hospital.  A 20 minute wait and we saw the dentist … he was not able to help as J needs an Xray and serious repair!  He can only fix small cracks!  Pleasant enough … but tooth problem still needs ‘crowning’.  Perhaps Naples!

Quick hoover – J and identify some possible overnight Parkings in Assisi – K and we were off by about 11.  The guide book made Gubbio sound good, so we set this as a via point on Brad, the Sat Nav.  Perhaps I should explain … We had an incident with Sally, the Sat Nav.  Suddenly she became Afrikaans and we could not understand her.  About to re-set her back to Sally and thought we could do with a change of voice, so we now have Brad …. male American.  Brad as in Brad and Janet in the Rocky Horror Show, as he sounds like an all round nice guy, but a bit dim.  Sadly he does not say rout for route.  A slight digression …. Brad decided to take us the most direct rout(e) – over hills.  Lots of hairpin bends and hill towns with castles atop.  Pretty but slow driving.

As we pulled up to Gubbio it was really striking: a Roman amphitheatre in the foreground and layers of a glowing white stone town behind.  Banners proclaimed that the white truffle festival was on.  At the TIC we asked about the main sights, the truffle festival and an overnight Parking with water.  The Parking was only about a half km from where we had parked, so it meant we could wander at will and not worry about getting onto Assisi, which will keep till tomorrow.

Roman Amphitheater – the first sight as we arrived.

Our rout(e) around Gubbio included several of the truffle festival stall areas.  There were not many customers about and we were pressed with samples to consume … managed to come away without buying the EUR300 truffle I was kindly shown.  But did buy a tuna and pistachio paste, nougat for Maddy, a small lump of cheese and a bottle of very green pistachio cream (alcoholic!) … no  truffle products though :(.   Apparently to keep the truffles, you place on kitchen paper, which needs changing daily and place in a glass jar in the fridge.  I was told the Japanese often buy large ones which are unusable due to lack of care in the keeping.  My truffle guide unscrewed the lid on one truffle jar and the scent was very heady … almost tempting!

The historical part of our rout(e) was equally rewarding.  The Palace of the Consuls traced the history of Gubbio … prehistoric, redesigning under the Romans and then retreating up the hills when the Byzantines and Goths came as it was then easier to defend themselves from there.  As part of this redesigned city they used the latest technology – toilets and water pipework to fountains and really impressive huge arches to support the Piazza Grande.  The Palace also contains the Eugubine Tablets – 7 tablets with inscriptions on brass.  These date from 1BC and were undeciphered until the late 1800’s.  They provided evidence of how people lived in Umbria before the Roman Conquest.  The part I read (yes, translated into English) was about the detailed rituals for sacrificing a goat.  As well as art and stone, there was also a superb viewing gallery at the top.

We wandered the streets and somehow found ourselves in a bar enjoying a rather pleasant red.  More wanderings and stalls and back to Chardonnay.  Our neighbours are all Italian, but it is quiet and only EUR5 for water and waste etc.

A fantastic afternoon – one of those moments in time…. 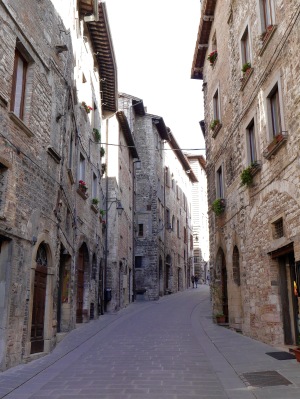 The Plazzo dei Consuls with the Piazza Grande supported by massive arches. 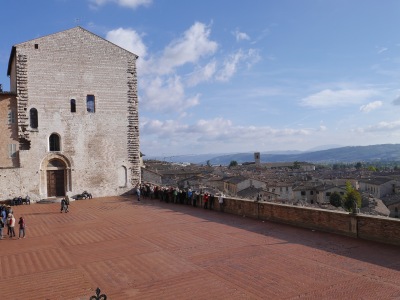 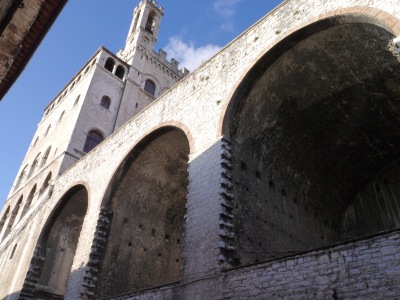 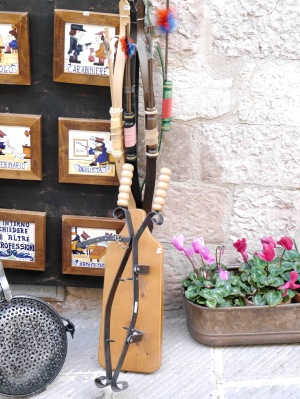 Shops were classy: truffle and other local food products and ceramics. But even so … we still saw bows and arrows, a crossbow and a leg trap.

Sunset over the amphitheater as we return to Chardonnay