A good run around the site.  We left the campsite having explored nothing of Tollymore Park, but every now and again you need a down day.  OK sized pitches with hard standing and a shower block.  Chemical toilet and taps along the road sides for water, but no grey waste outlet!  Knowing we were headed to the Republic of Ireland, we swapped wallets back to the Euro one … fortunately nearly 200 in it … worth more than when we got them!

We did a food shop, first Lidl and then Tesco, for the bits not available in Lidl – it does mean shopping takes a lot longer, but worth it on the purse!  I had offered to cook for Fionnualla and Shaun – we last saw them February 2015 and Fionnualla cooked for us.  Having purchased all the ingredients I then started prepping … in the Tesco Carpark!  We checked to make sure we could not see a time limit on how long we stayed there, as we did not want another ‘outstaying your welcome’ fine as we did at Aldi in Bakewell!  Choc mousse setting in fridge, mash done, mushrooms stuffed and chicken cacciatore done … means we can relax when we arrive.

We were a little later arriving than planned … I was driving and started to question where we were when I saw a sign to Dublin Docks and I knew that Malahide was further north!  J caught navigational napping … in his home town!!!  The rush hour and stop start to get back out meant that it was MOST DEFINITELY drink o’clock when we arrived.

Really lovely to spend time with the family, especially Fionnualla, who is a childhood friend of J’s … she is one of those special people.

No early start and no run … feeling too full of food and wine excesses from last night!  Still managed to tuck into the breads, hams and cheeses that Fionnualla gave us for breaky.  Brown soda bread .. yum yum.  Daren’t buy any!  She also directed us to a massive Tesco so I could buy a cake tin.  I know, what on earth do I want with a cake tin in a motorhome, and I’m not really over fond of cake anyway (more a sticky sickly out or copious amounts of cheese person).  Delia (J’s sister) and Liam were holding their annual family BBQ on Saturday and for once we were able to come … and I’d offered to bring some puds and …. toffee vodka.  Fortunately, J had ground up the hard toffees and mixed them with the vodka whilst i’d down food prep yesterday … as there was none of bottle 1 left after Fionnualla and I had finished it off last night!

We attempted to visit Kilmainham Jail on the way to the campsite.  But no chance … apparently you have to book ages in advance.  No Plan B and J not feeling too good so we headed straight to Camc Valley Campsite.  We’ve stayed here a number of times before … EUR 27, but this includes a fully serviced large pitch – love having water on tap … every time Chard did a ‘I’m empty’ gurgle, so easy just to put the hoze in and switch on the tap.  We normally conserve water as music as we can … we got very liberal with it here!

How annoying … I was short cream for the ‘Passion Fruit and Marshmallow Sensation’ … the recipe book’s name not mine!  So J, with his navigational skills back on form, cycled off to the nearest town 🙂

We had so much to carry … wine, toffee vodka, two puds and coats … so the trusty shopping trolley came in handy.  The journey was NOT so handy!  Bus 69 from the site into town:  15 mins late and then took an hour.  Bus 145 out to Cabinteely … another hour.  All told, door to door 2 hrs and 45 mins!

It was brilliant seeing all the family as the last time K saw them in Montecatini, Tuscany last August … J had flown home in October briefly for Jade’s christening and seen some bods then.  Not able to face the nearly 3 hr repeat bus ride back, we splashed out and took a cab! 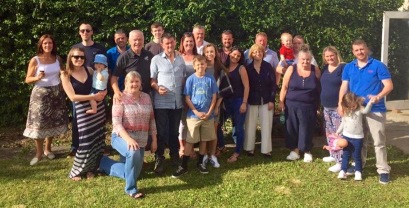 Time to run and do pilates …  been seriously slacking!  Being Sunday, we had the choice of ONE bus, as they only travelled every 2 hours!  The 1.15 it was.  Someone should have told the driver though, as he did not arrive until 1.42!  Once into town we followed the blue shirts up to Croke Park.

The game went as predicted – The Dubs won by a healthy score – but Westmeath gave a really good showing – they will win major trophies very soon – all the best of luck to them – more competition is needed in Leinster…   The game was enlivened by a streaker – male and a fine figure of a man!  Liam was absent from his seat when the streaker hit the pitch and on his return was greeted with:  You got your clothes back on quick! 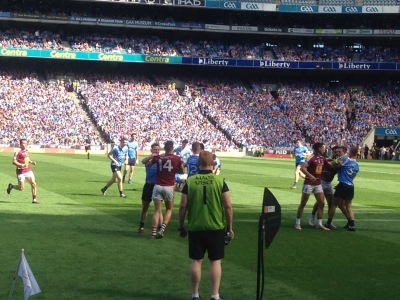 Handbags at dawn … I had no idea that Gaellic Football descended so often into fisticuffs! 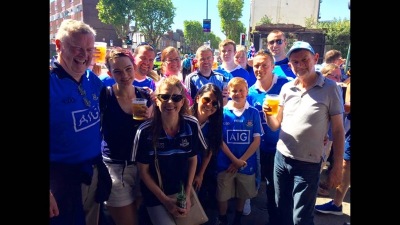 J:  Monday we decided to have my regular health check – Delia kindly arranged for us to see her doctor in Bray. Everything is working as expected and reassuringly so… The beach looked inviting – we thought about a swim but the Irish Sea produced a windy reminder and we sailed back to Camac Valley.  Very hot – the BBQ lighting apprentice – Mr James C recommenced his in-dentures by lighting the fire with his teeth – not to be recommended for small children or anybody! The Nicky, Jimmy and Ian magic dust again lit the evening air and I managed to not fire up the endangers dentures! 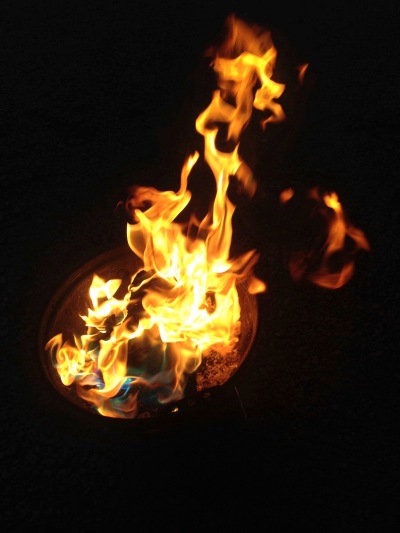 BBQ followed by firelog … not cold but comforting!

J:  Pilates of the Camac pirates…..I did my first real session!  Very good and I immediately felt the benefits on my back and shoulder.  We took the bikes down for the first time in weeks and Maps.Me guided us alone the Grand Canal to the city, where we picnicked in the Phoenix Park – the biggest City Park in Europe. We watched some boys and girls swimming in the canal but very sadly, some youths drowned there a few years ago.

Evening saw a BBQ – again!  Chicken, Halloumi (always think of Mike, as he introduced us to this on the BBQ) and veg – loving aubergine on the BBQ too at the mo.   Wine was partaken of but we realise again that we must cut down; its been a heavy booze week or so – tomorrow we will be teetotal – and I will try alcohol-free lager for the first time ever. 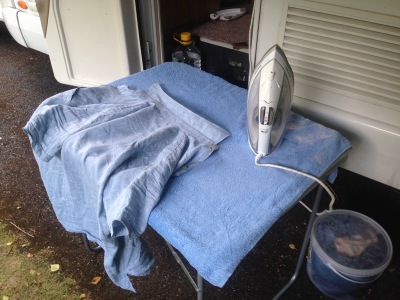 With the abundance of easily available water, warm drying weather and two perfectly positioned trees for a washing line, I’ve been hand washing most days … leaving just a couple of items that needed ironing!  This does NOT happen often!

An early run – 3k at sensible slow speed – during the run, Amelia phoned and said she and Thomas and Holly would like to join us for some time on our travels!  Beautiful! Amelia – you can have the van spare bed – it will be our treat and lovely to see youze all!!!

Craic in Irelands wild camping App was the fast track to Co Fermanagh via motorways that are not very exciting but at Euro 2.80 for a 50 mile trip – very acceptable indeed!

Quiet as in there’s only us by the shores of Lough Erne and OK views of the lakeside… but lots of lorries and traffic noise till the evening.  The bridge just ahead of us is single track and there has been a squealing of HGV brakes as the driver did not slow before realising there was already a vehicle on the bridge!  No running possibilities here as the road is just far too busy. 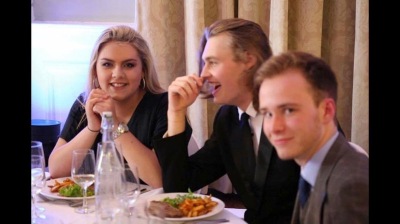 And finally, a pic I pinched off Facebook of Maddy at her school’s leavers dinner.