In this quite idyllic location, we both ran in the morning – sorry Oscar – you ran too…. The first week of my new structured training programme – day 3.  Then we drove to Parga. Perhaps I should get one item out of the way and on the permanent record…..whenever we arrive into a new town – we always have coffee!!!   So, I won’t repeat it in every entry, (perhaps).  A nice town but very dead…castle…council workers putting up street Christmas decorations, drilling holes in the pavements.

A lot of the locals left the village in 1819 when the British sold it to Ali Pasha … his reputation preceded him.  Then muslims moved in … most only to leave again when there was an exchange of populations in 1923.

The wonky toilet – Believe it or not this has been straightened.  Can’t imagine anyone sitting on the throne here … the door has lots of ventilation!

Pelicans and Flamingoes on our drive off the island Korronissia.

Parga:  Lots of little islands with quite a few with chapels. 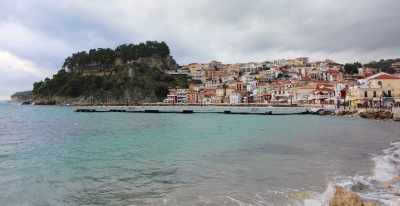 View out the other side of the castle.

The big Katherine birthday – a mere slip of a girl…..

K ran in the a.m. – from our very convenient but not pretty overnight spot……  We Jezzed to Ammoudia – another slightly dead beach town – not surprising as it’s mid-December – don’t they know our season is all year long?  Not even a coffee available here.

Aherondas Gorge then to seek a riverfront overnight and birthday celebration meal out. The ground was too soft – and the restaurant was closed anyway – so we aborted. (The riparian path was washed away so we walked only a short distance.)

The rain was getting heavier as we briefly looked for a suitable ‘wilding’ spot for the night – nothing really came up…. so, a campsite was the answer (we also needed a water fill). The only one open in the area – we were the sole occupants – picked a lovely sea fronting pitch – and as the wind got up and howled around, we had coffee with the owner and 3 generations of his family and dog Rico – in front of a roaring fire – excellent!   The nearest open restaurant was 2.5km away in the rain – so K prepared an emergency haute cuisine 3-course meal – with those nice bottles that contain bubbles!   Lovely bubbly jubbly…….  As we slept, the waves crashed against the shore – and a big electric storm thundered overhead – the ground moved for K during the night….no answers on a postcard, please!

Nekromanteion Of Ephyra:  A medieval Church sits above the Greek oracle site – the antechamber of Hades.

Pilgrims arrived, and stayed over night in windowless rooms.  Drugs were involved.  They then groped their way along corridors and were lowered into a cavern where they would commune with the souls of the dead.  Apparently the dead were not merciful and often vindictive.  No pix inside the Antechamber to Hades as a mediation group were in situ … wonder if they’d been at the lupin seeds? 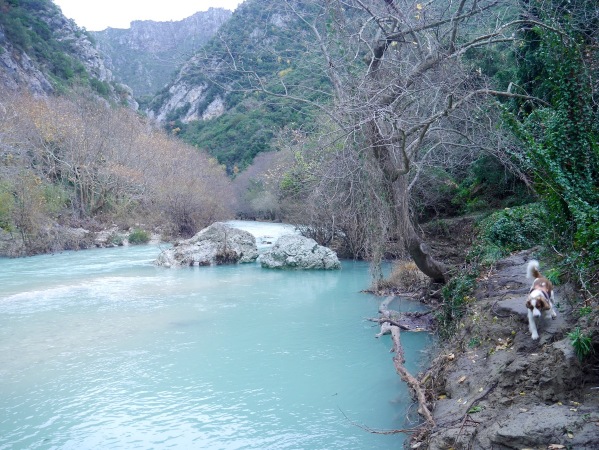 Aherondas Gorge.  In summer families wade up river … not for us.  Rain starting or we would have found an alternate walking path.  The same meditation group arrived and used most of the car park.

Our campsite pitch – above a small cliff right next to the waves.  Sounds of stones with the waves all night, added to by thunder of a storm.

Ah, the joy of a hot shower!  All brekkied up, including Oscar – the scallywag also ate the campsite dog’s breakfast – grrrrrrr, Oscar – not funny when we’re guests!  You’re setting a bad example for Poppy and Boo – they do read our blog, you know.  Luckily, K gave one of your treats to Rico as recompense.

Having declined the opportunity to commune with the dead, we headed to a place where 60 women threw their children off a high cliff and then jumped to their own death!!!  This Ali Pasha was a very bad man who promised the local Souli people peace and then reneged on his word. Rather than be defiled, they went up to a very high place and committed collective suicide….. It doesn’t bear thinking about…

Back down the hill and a short walk to Ancient Kassope – Romans destroyed it.  But compact and well laid – easy to follow – large amphitheatre – a good visit.

We chose Preveza for the belated birthday celebration meal. During coffee, we had a local restaurant recommendation from the owner – local word of mouth is always good.  Our overnightly is a large car park near the sea – with resident wild dogs – but not aggressive. No noise at night – perhaps the occasional ‘salivaexchanging’ couple… try saying that with a mouthful of crushed ice!  We walked into town to the recommended establishment – in lashing rain – that we only saw in Spain and Brizzle. No street names – rescued again by some locals who directed us. Upon arrival, we were truly bedraggled and bedrizzled! We were also ‘feckin soaked’.  Settled our squelshy bottoms and looked around… it was the local male only divorcees, widowers and lonely hearts club band!  Not falling into any of those categories, we supped well nonetheless….local meatballs, fish and (in K’s case) 200 kgs of spuds…good wine – and we retired to a dry van (and a rampant Oscar) – and a nightcap of Limpcello -what’s a ‘limp cello’, James?  It’s not a cello on Viagra – but a rather tasty libation from the freezer!

Goodnight – and another happy birthday to my rather splendid wife… 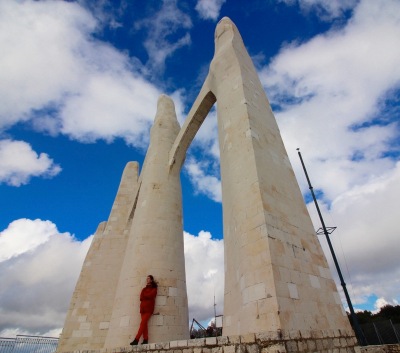 The guide book describes the monument as hideous cement and stone … perhaps the author is not a fan of art from the 1950’s but we liked it.

They held hands and danced off the cliff watched by the bemused Muslim  soldiers.

Great views from the top.

You can just see Jez parked at the Zalongo Monastery. 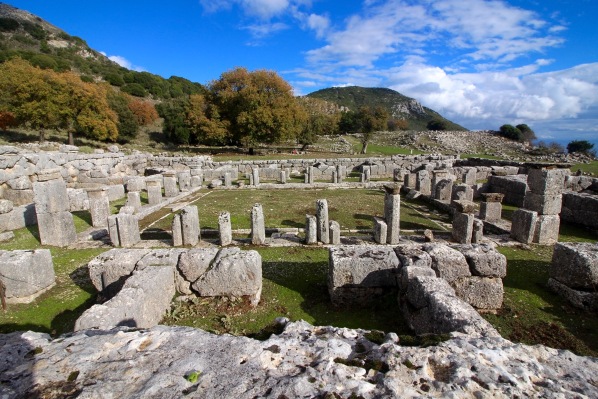 We’ve seen much better preserved amphitheatres, but this site is compact and you really get a sense of how the town worked.  The amphitheatre would have seated 4000, for a town of about 6,000. 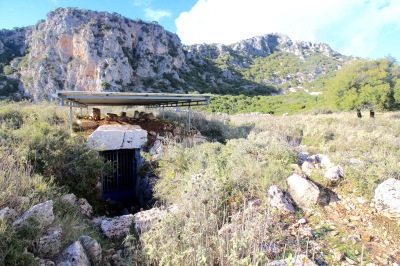 The only tomb, but it had been ransacked before archaeological excavation in 1806 … only 3 years after the women of Zalongo leapt to their deaths. 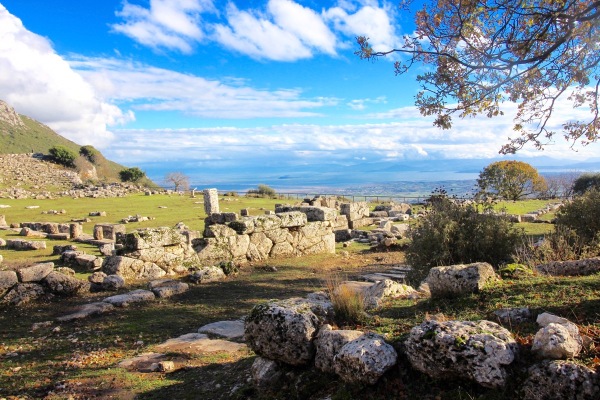 Kassope was in a superb situation … mountains one side and sea views the other.