Has our reader ever seen deer doing Pilates? Honest – K and the little ‘dears’ were boogying on the beach – to a rendition of – ‘Pilates of the Carideen’ !!!

The doe and her two young grazed for ages opposite the carpark.  K pilates’d here and the carried on grazing.  At one point two cocked their heads on one side, pricked their ears and gazed at me as if I were doing something never seen before … possibly not!?

This one caused the car park to jam, by grazing here.

When the rain did cease, we were rewarded again with more lumps and bumps. 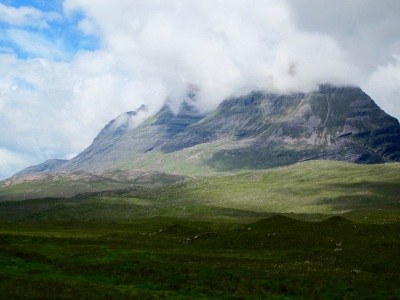 Inverewe Gardens – no deer  in sight this time. Wonderfully disorganised organised planting, Last of the many varieties of Rhododendron – pure art all around. Osgood MacKenzie (had to type this, as love his name), inherited the estate, planted Scots Pine to protect his garden and started planting in the 1860s.  Free to us, as we used our Italian National Trust equivalent again.  The rain pretty much held off and we wandered the many paths, trying to avoid the Germans and some Dutch.  Honestly, Germany in particular, must be empty as there are so many here. 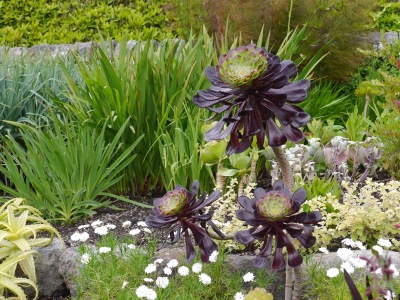 A couple of unusual plants in the Africa section…

… this one looked plastic. 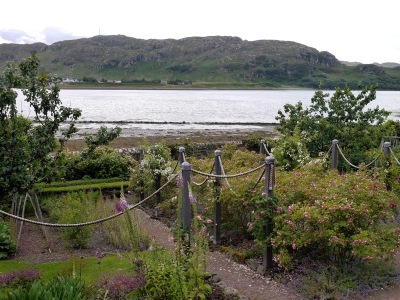 View from the gardens over the bay and hills.

Trunks that caught my eye!…

A fine specimen of a trunk; one sporting a rough bark of a beard!  A slight incident with a half shaved beard this morning, when the battery died.

We stopped for a wander around Gairloch in the rain and found another charming bookshop come cafe (Margaret and Shirley had also recommended this).   The Mountain cafe roasts their own coffee and the bookshop stocked an amazing selection of tombs from walking and climbing to latest fiction and mindfulness … we could have left with a wheelbarrow full.

Few wild camping spots in Gairloch, so we moved on a few km up the road.  We’d just parked up and were congratulating ourselves on another fine night time pitch, when Nick pitched up.  He’s doing the North Coast 500 on his bike in the opposite direction to us.  As we chatted and marvelled at his 60 mile ride that day, we admired the view.  He joined us for a few bevvies in Chardonnay … I happen to mention that I’d bought Maddy’s wet suite up with me, but not had the courage to test the icy waters.  Nick (sadly) did not hold back … we’d both go for a dip – tomorrow at 10.00!  All night I dreamt I was swimming and boating around loch after loch, lost,  with no money or phone signal, trying to get back to James.  I think I must have been quite concerned at the impending drenching!

Our night time viewpoint over Loch Bad … not BAD at all!

K ran early – wearing her ‘halo’ firmly on her head….. minor hangovers?   Not she!   K and Nick (our delightful visitor of last evening) braved the ’n-icey’ temperatures of Lough ‘Good”  for what they claimed was a triathlon swim, but actually was a ‘miniathlon’ dunking!  It was actually not as BAD as predicted.  Both Nick and K felt very virtuous.  I wonder who it was that stayed shore side and took pix?!

The temperature is NOT so idyllic!  Thank goodness for the borrow of Maddy’s wet suit.

Come on in, the water’s lovely!  Or is that a Nick grimace?

Hangovers cured.  We did it!

We had thought about a walk around Beinn Eighe, near Kinlockewe.  We even stopped at the Visitor Centre, but we made a bad weather call and we justified within 5 mins.  One drenching a day is more than sufficient.

We drove onto Torridon and had a 3 mile amble through a National Trust for Scotland Deer park.  A very welcome lunch stop of cheese toasties and a shared bowl of chunky chips.   Oh so tasty!

The scenery just keeps on coming.

A vantage point over Loch Torridon.

On to Sheilag and again a most popular wild camping site overlooking the sea… common land that is used as a campground with an honesty box for donations.  Again lovely views.  We were politely asked to move forward by motorhome novices (3 adults, 2 children and a large dog in a Rental motorhome – rather them than me!), so they could have the same vantage point.    We ended having to get out the Chocks to get level.  And then they went and moved away from us anyway – I won’t hold the fact that they’re Irish – County Cavan and Donegal, against them!

If the rain eases, we may venture to the local Pub to see Germany v Italy. (We talk quietly about Iceland v England…).

Our perch of a pitch over Sheildaig.

We retraced our steps slightly to go north and then west along the B869 – we’d been warned that the top part of this road was not suitable to us with our 8 metres, but we understood it to be very scenic.  Initially we were disappointed – the road was a bit hedged in.  But it did open up and the rocky lumps and bumps were again magnificent.  Dan, our Scottish friend from Sicily, described the terrain as being a bit like a moonscape – it is.  We stopped at Clachtoll and went for a wander on the sandy beach.  Lots of jelly fish on the sand, which J told  me were Portuguese Man of War …  I doubted his word and later googled it … nothing like!  And he said it soooo convincingly!

Now reader, listen up…. Did youze know that my lovely K plays footie for England?  It may strain belief but she was a late call up by Roy Hodgson.  Sadly not in time to save the day against Iceland – but she practised assiduously on the beach in their new training camp – in the Highlands.  She’s obviously a ‘shoe in’ for the next World Cup. She lined up the found tennis ball – straightened her aim, avoided the jelly fish – and bending the ball like Beckham – scored an unerring Wayne-like goal!

Clachtoll Beach – it would be a perfect spot for boogie boarding, if only the sun would stay out!  Yes, I have wet suit and board, as yet unused!

The lumps and bumps across the B road.

More lumps humps and bumps … worth the minor detour.

As an extra warm up, we had a healthy breakfast (run out of Stornoway back pudding so muesli and smoothie it was!), mosied up to Achinnes bookshop, coffee and cake – Brexit discussion with the owners and fellow guests.  The business has been for sale for a couple of years … uncertainty over independence and now over Brexit.

Falls of Kirkaig was our target. Only an hour to the falls – have we used the word ’stunning’ already?  We walked on a little further to get a different view of the ‘anthill’, mount Suilven.  The sun truly came out and we shed layers … K down to her thermal vest!

The left hand bump is the anthill, Mt Suilvan.  From here you can see it has a tail.

Back from the mountain, our journey found the (again) most amazing wild camping site by the shores of a lock at Knockan Crag.  This was where in 1859 the theory of ‘thrust faults’ was developed by James Nichol, who mapped the age of the rocks in the area … to work out how older rocks could be nearer the surface.   We sat for hours watching the light change across the mountains … free entertainment.  Free toilets, free 360-D views – and a not quite free gin – of the Rose Rock variety…. Slainte, people…

Part of the impressive visitor display at Knockan Crag, carved with the name and the age of each type of rock and its position.

These men actually talked and explained how they came to work out the thrust theory.  They’ve aged well!

We weren’t the motorhomers to take advantage of the views for the night.

The Aran sweater was put to good use today – summer?  A Highland summer and actually not that cold, really?  K is sporting long johns and waterproof trousers (three leg layers and 4 top!) in addition to the vest!

Ullapool in the soft rain, guess what – coffee and calory-free cakes, honest Injun – Jim? It’s summer but not as we know it – Spock!  Not much here really, but a Tescos, so we re-stocked on fruit and veg.

Ullapool … a lot of tourist shops selling shortbread and fleeces, coffee shops and a harbour to the islands.

We fell for the Falls of Measach – not over the side though.  Sheer?  Indiana Jones would have had a field day here…  On the bridge over the gorge, you really got a sense of how steep it is ….  Mr vertiginous Clune kept to the middle, whilst K hung over taking pix. 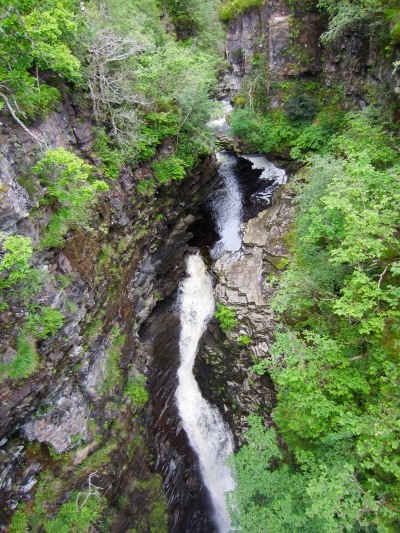 The Falls falling, as is their wont.

Onto Gruinard Bay…Oh and by the way – my lovely Lady K – drove on the left hand side of the road today! “A sinestra” – and I haven’t told you, by the way….?  It’s only been two months since on year of on the left driving!  On the beach, K chatted to three generations of family, whilst the youngest filled her hands with newly washed rocks.  The family had moved up here three years ago and not regretted it for an instant.  Our latest plan is … when and if we ever tire of full-timing, we’ll sell one of the Bristol houses and buy up here.  Stunning scenery, open space where you can breathe and low density of population.  Perhaps a B&B – with the North Coast 500 increasing in popularity, we’re told B&Bs are in short supply.  How hard can it be to change bedding and knock out a full Scottish each summer morning.  To avoid SAD, we’d bolt south in Europe each winter.  Good plan?

We drove onto Mellon Udringle, which is possibly one of the prettiest beaches we’ve seen.  The couple from the beach conversation arrived with their dog and, incredibly kindly, gave us a local newspaper / magazine … they are trying to sell the area to us.  A persistent message is that the Highlands need people to live here.

A bracing walk around the headland.  We would have stayed overnight in the car park, but we like to obey the “No Overnight parking” signs and so we wended our way back to the Gruinard Bay parking, where we were soon joined by a panel van of 3 Germans, two of whom seem to chain smoke … sympathies for the third!  My beach contacts had told me that the low tide will reveal several hundred metres of sand …. low tide is 10.40 … wonder if we’ll make a late evening stroll out to the rocks across the sands? 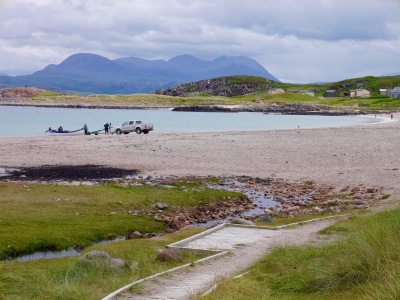 Mellon Udringle Beach … this pix does not show how azure the sea is.  Big mountains on the horizon.