The campsite staff were outstanding … gave us so much useful information on what to see and the practicalities … and in impeccable English.  After the previous evening’s festivities we were a little slow getting going!  A walk into town and we promptly dived in for a coffee.  Danny and I minded CO2 and had another coffee (close call for a Back McFlurry!) whilst the two J, R, P and G fans headed into the Beetles museum.  Lunch.  Minaret to be climbed.  Castle to be clambered and ice cream to be eaten! 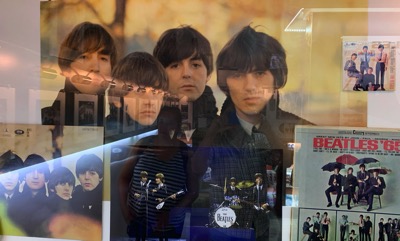 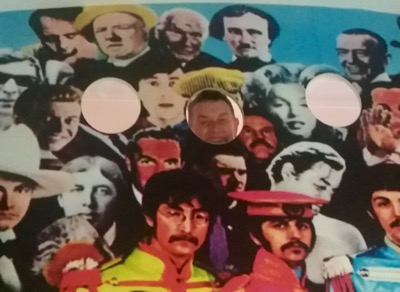 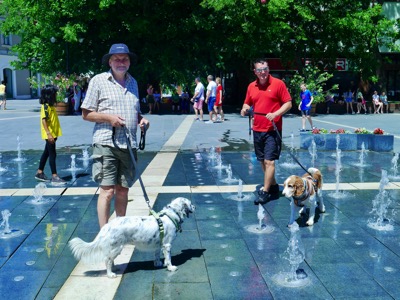 An attempt to cool down CO2.  Not sure who got wettest. 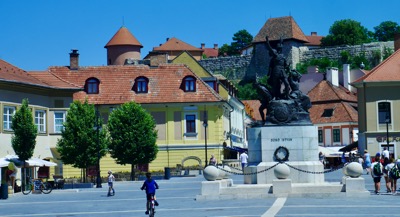 Dobo Square.  His fame is that he was in charge of the castle when the Turks attacked and defeated them.  Actually sicknesss, lack of food and the weather finished off the Turks, so they retreated.  They came back a few years later with  a force of 100,000 and won.  As Danny, ex military, pointed out, campaigns are fought now with 8 soldiers. 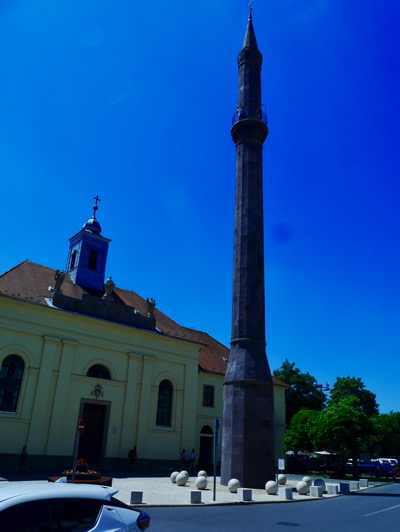 Apparently this is the most northerly minaret in the world.  98 steps, which Danny and I know about as we climbed it. 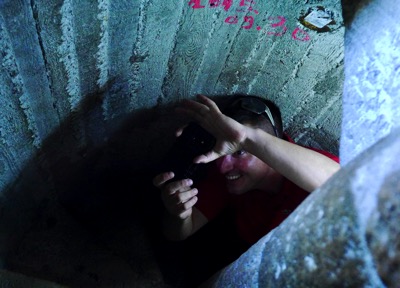 No passing places, so controlled batches of tourist allowed up.  Steps were steep so we used hands to help climb, and were slippery from wear.  Don’t know what their procedure is for getting people out who may have a panic attack or fall, as it really was narrow. 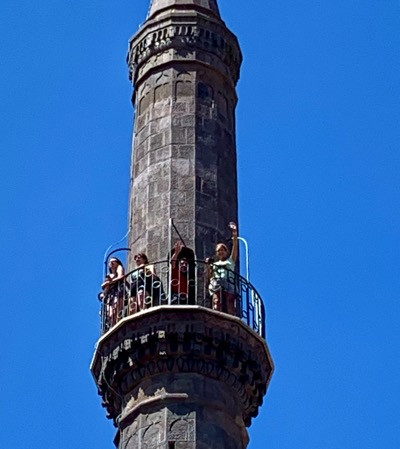 But I was the only one to step out onto the platform!  Such a hero!!!  Perhaps I just have no imagination. 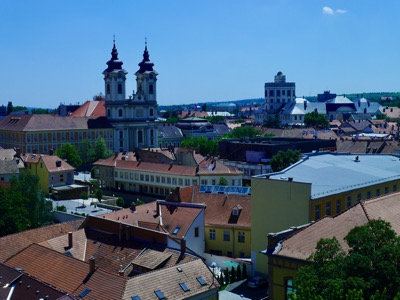 View from the top of the cathedral.  Being renovated so couldn’t visit it. 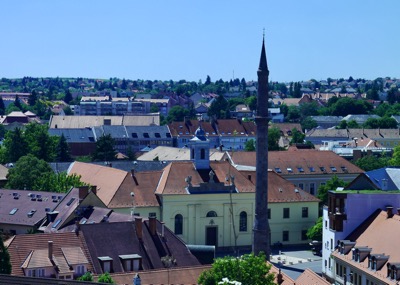 That minaret sure does look narrow and tall from the castle.  No wonder I had thigh ache. 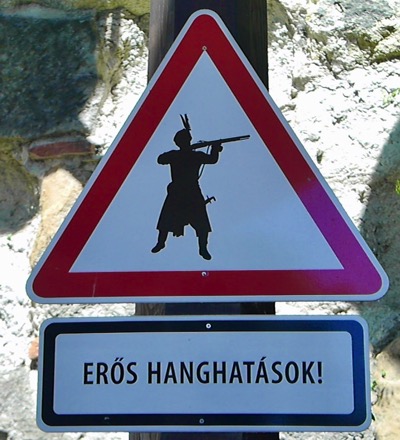 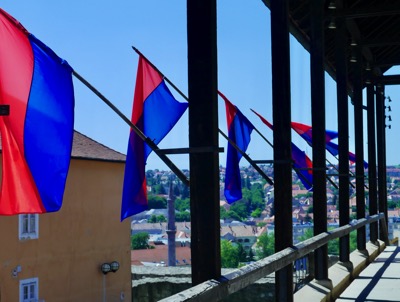 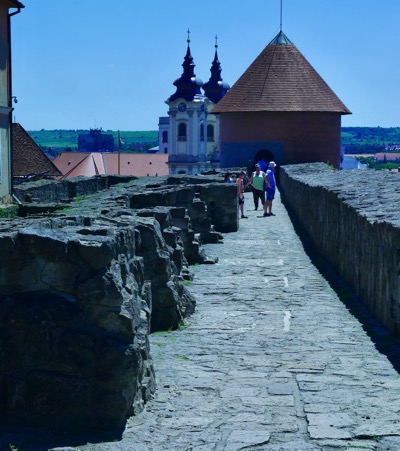 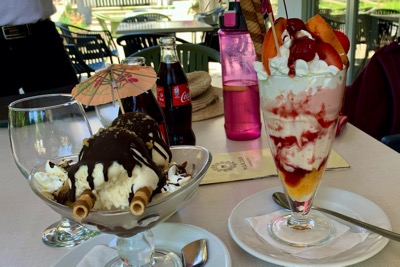 A cracking day sightseeing! The day might be over, but the evening was to come.  One of the main attractions of Eger is its wine.  The Lovely Lady Street or Nice Lady Street, depending on your translation, is not, as you might suppose, a street of brothels, but a street and square of c.60 wine bars and restaurants.  Each wine bar represents a local vinyard.  This calls for a big night out.  Lisa and I did our hair and put on makeup!!!!  Some of the wines were good, some really not!  We purchased a bottle each for later … plastic bottles but cheap as chips.  And you knew what you were buying.  Really is a pub crawl with wine.  What’s not to like?! 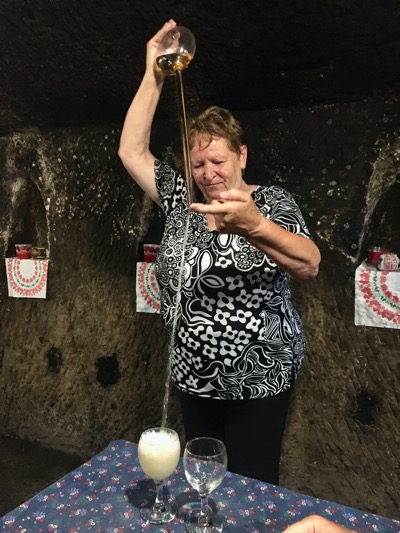 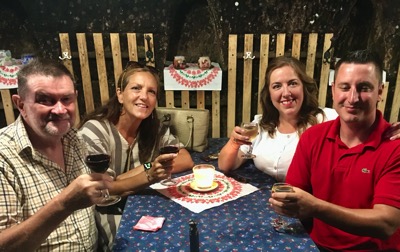 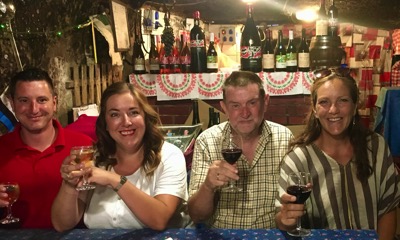 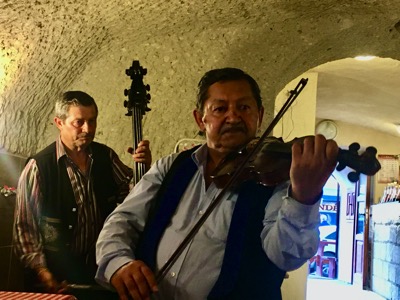 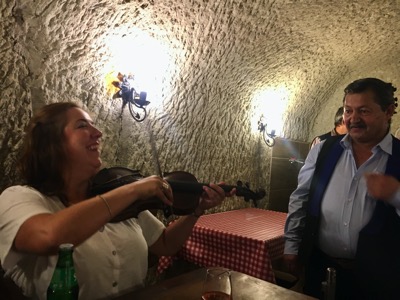 Reckon he handed over his treasured violin thinking Lisa could play … wrong! 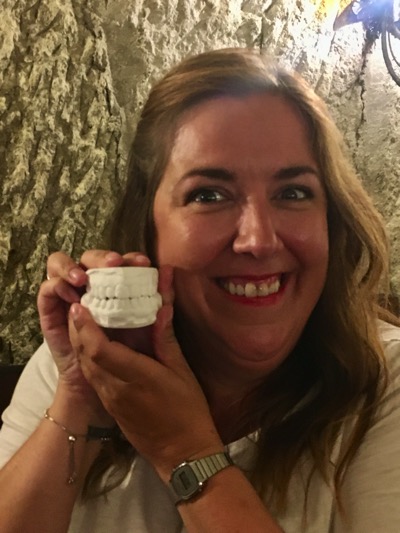 Amazing what you can find in your hand bag! 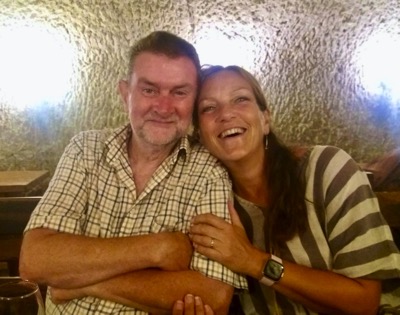 Despite a lightish lunch and ice cream,  or perhaps due to the wine … we still managed a meal out.  More traditional music and hearty portions, but tasty. 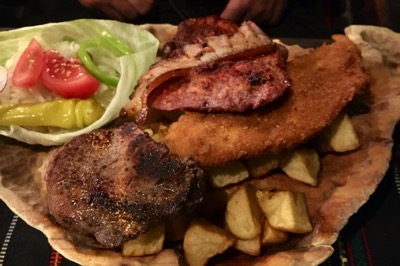 Meaty!  But not ours.

Two heavy booze nights had taken its toll … for the second time we toddled into the campsite office and paid to stay another day.  Our tourist guide, aka the campsite chap, told us to visit the European version of Pamukkale … travertine terraces.  We had every intention of doing so … but didn’t.  The day oozed by with jobs.  Lisa and I dyed each other’s hair.  And then, bravely, Lisa volunteered Danny to cut my hair.  It had not been cut since September and I really don’t want to have trouble finding a hair dressers when we get back to the UK.  And Danny HAS cut Lisa’s before. 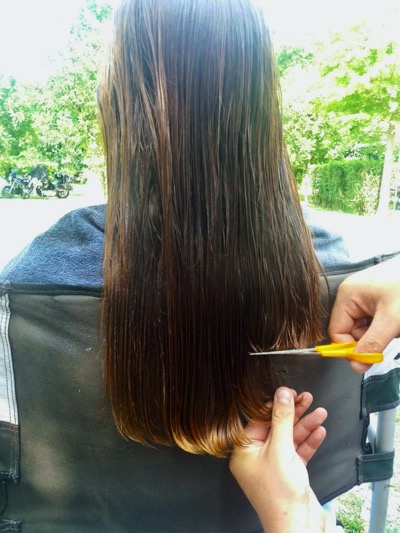 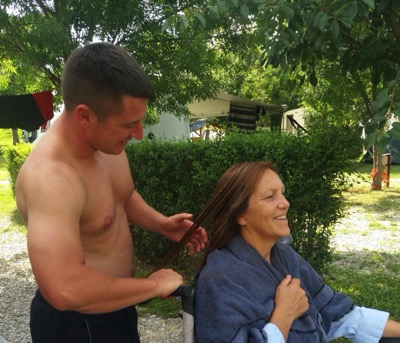 In the evening we wandered out again into Beautiful Lady Road … just the one sampling.  We were definitely flagging.   And back to the same restaurant for dinner. Good food again. I am missing fish though: lake fish is available, but not prepared how I would choose.  The traditional music band wandered over as we were the only people claping them … must be  cultural thing.  Having established that were were English and Irish, they proceeded to play Auld Lang Syne!  Not quite so late tonight!