Peaceful evening parked at the gates of the closed campsite – no problems. We had to move Jez to let a man into the site – moved just up the road to a parking near the ‘kooky’ mill/laundry houses – lots of mini waterfalls…… and a coach party of nearly all women.  This is not the first time we’ve seen nearly all women … Asian groups too.  Where are the men?

Slowly meandered on to Jajce – with free parking at the youth hostel. Coffee, de rigeur – wandered through the lively market – discovered that today is the anniversary of the declaration of statehood for Bosnia Herzegovina – lots of flags and celebrations including a stand devoted to the cult of President Tito.  We could have purchased a Tito 2018 calendar … but not sure would have appreciated it as a gift.  Back in 1979, I was in Damascus with a work colleague for the weekend – we wandered through the mile long covered souk – when a motorcade with Tito and Hafez al Assad (president of Syria then) drove through the narrow souk. We had paid 1 Syrian Pound for bed and another 1 Pound for the hard boiled egg breakfast!   The town castle was OK – nice views…. and the town had a lovely feel to it.  Checked the weather forecast and snow is on the cards for Sarajevo – so, no snow for us or Jez – headed south for the pilgrimage town of Medugorje instead. A significant Christian site devoted to Our Lady – some teenagers witnessed apparitions there years ago – it’s not ‘officially’ recognised by the Vatican but 1 million pilgrims visit each year…..

Our overnight site/autocamp cost Euro 10 with electric and wifi.

The wooden roof tiles were being replaced on some. 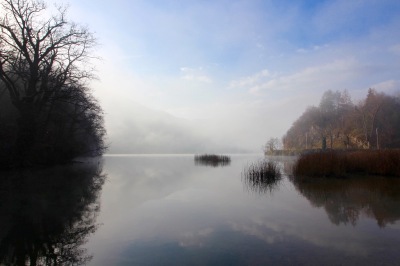 It was really misty initially … but the blue sky made an appearance. 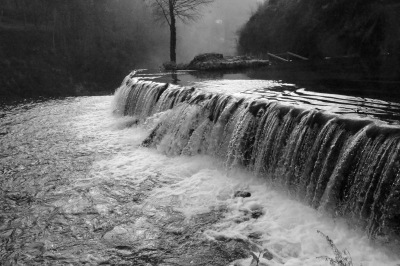 Jajce:  Pliva river waterfalls in the centre of town. 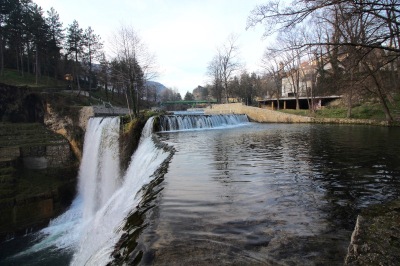 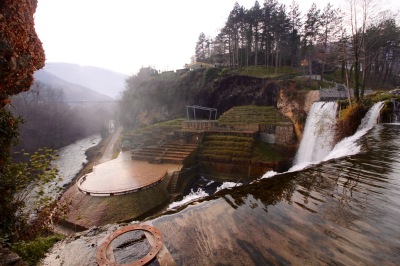 St Luke’s church and nearby catacombs. 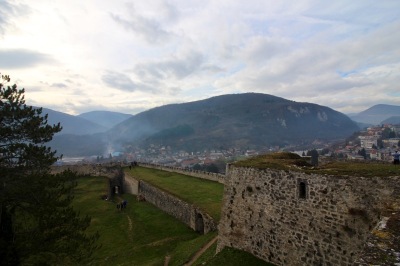 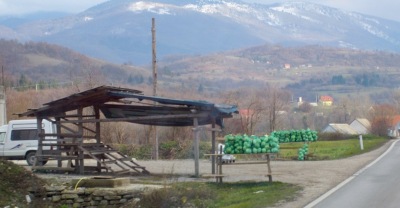 A lot of cabbages being sold in netting sacks along the roadside. 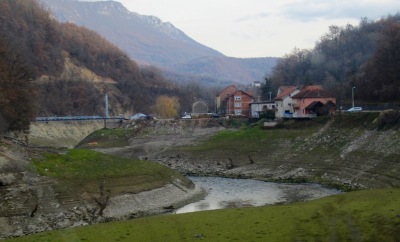 Part of the pretty route south following a river.

We walked to the main church and shrine – in the rain… lots of very touristy/pilgrim tat stuff for sale – we bought one postcard……strong Irish influence.   We had seen a picture of some local falls, but decided against visiting as they did not look a patch on Krka or Plitvice in Croatia.

Dubrovnik was the next port of call – reached the camperstop in heavy rain and a steep ramp up to site – a centimetre to spare under our exhaust pipe… Surprise – the same two couples we met at Stobrec camping near Split. Rainy walk with O to a beach being refurbished – glass of vino rosso – K’s glass proved the physics of gravity and attached itself to the floor – oops!

Medugorje Church … not the sign saying to take care of your belongings … what a Christian place!

More e-bike repairs – gears, chain and puncture/new tube fitting…..Spanish Pork in the slow cooker and biked towards Dubrovnik – short cut suggested by the site lady manager – this meant Oscar got a free run for a while. The Old Town looks lovely – public Christmas decorations being installed – a clear month before the event! Bomb damage from the ’92-95 war – tastefully rebuilt.  A walk on the city walls would have cost a whopping Euro15 per person!!!  Not for us….  Bumped into Choe and Chris fellow motorhomers staying at the same site – they are from Jersey – scollop fishery business/diving. We invited them to our van for supper later.

Lovely snackette lunch – it was getting very cold – see K with her lunch blanket!  Back to the bikes – another flat tyre on J-bike and K’s front tyre sticking – what is going on here??? I cycled home with regular pumping stops – on the main road with vehicles passing us far too close…..

Super evening with Chris and Chloe – rather boozy – wine, grappa and fruit brandy – ouch! But the conversation flowed and we exchanged motor homing ideas/experiences – they are on an 8-month trip following our route to Greece.  They kindly gifted us some scollops – our Christmas Day meal partly sorted – cheers to you two!

Stunning views as we approach Dubrovnik.

Very much rebuilt and looks new.  Well, I suppose it is.  I looked at some post war images and they were flames and rubble.

Rather impressed with his large one.

We kept bumping into Chris and Chloe … so we just had to invite them to supper.  The trees are not sporting large oranges, but Christmas decorations and its not even December! 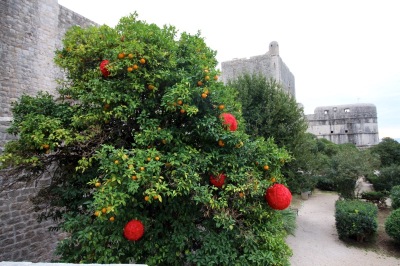 And oranges as well as decorations! 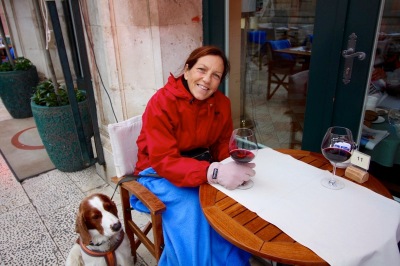 Even with patio heaters and a blanket … it was still cold, so the wine is medicinal.

James heading up the stairs towards a long line of rather large white panties! 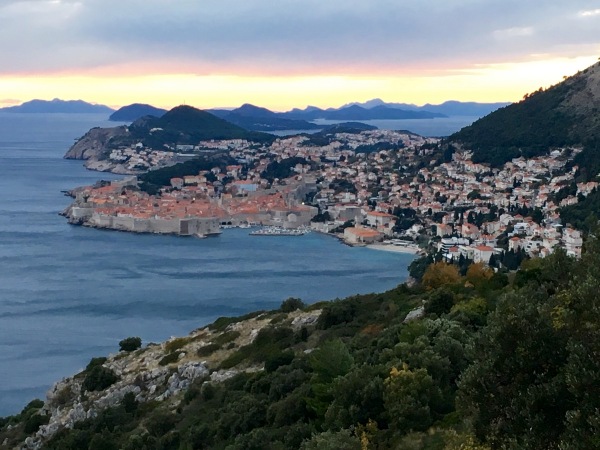 What another stunning view on the way home.

911- Tuesday 28th November: And into Montenegro

Dawn broke at 0900hrs – it broke rather loudly for some of us!  Post-evening effects….. Chris and Chloe departed for Montenegro – and a little later, we followed suit – we hope to see them en route at a campsite. A brand new country – the border guard told us Oscar should have had an extra rabies blood test – first time we’ve had to show his passport….

We wanted to stop at Herzog Novi but absolutely no parking available.  Our first possible camperstop was too steep on the approach – so aborted – next choice was fine – just a very narrow gated entrance – K managed to squeeze the gate open just enough to scrape through.   A pitch within metres of the sea wall – sunny cloudless day – we sat and had soup in the sun……  our socialising of last night mandated a nanny nap to recharge the batteries.  We have decided to stay 2 days – job day tomorrow – bike repairs (again …and for the last time … fingers crossed!), van cleaning, laundry, showers and sundry other bits and pieces.. Just 2 other vans here – Swiss and French – it’s very quiet – shhhhhh……

A few thoughts on Bosnia and Herzegovina

Please bear in mind, these are very personal reflections based on our 5 nights in BiH … in November!

As soon as we drove in from Croatia, it felt poorer.  There were quite a few beggars in Mostar.   Markets and odd street corners have someone selling their own home grown produce.  Really fresh … I bought a string bag of onions for £3 and some swiss chard.  But we have never seen so many second hand clothes stalls in markets – there must be a demand for them.

It was really hammered during the 1992-95 conflict. We saw some bullet and shrapnel damaged buildings in a few towns in Croatia away from the coast, but there are lots in BiH, even in main tourist destinations like Mostar.  Typically houses were stone on the first floor and wood above; you can still see some of these, but orange air bricks have replaced most upper wooden floors.  The wealthier houses have plastered both floors.   There are a lot of half built unfinished houses too.

Roads are often very bumpy and narrow.  They are doable, but we did grind to a halt a few times to let lorries or busses pass the other way.  Along the roads we saw a lot of stone monuments, like grave stones.  Sometimes they were for a couple.  We don’t think they can all have been road traffic accidents, but you never know, as similar to Croatia, the overtaking borders on Italian.  Cars are mostly old and battered.  They would not pass a British MOT.  And so many Volkswagens … a lot of the population worked in Germany, so probably brought the cars back with them.  My German has come in very handy again.  Roadside vendors are selling the same thing in each area … oranges near the coast, cabbages further north and metal work such as fires/cookers and lids around Mostar.  One chappie had great display of fur coats … give the cold, I admit to being tempted … but no space in my wardrobe.

There is a lot of rubbish along roads and in fields … a lot of plastic … worse than Sicily, which has had a clean up act in recent years.  There are bins around, but other than glass we really did not see any evidence of recycling, other than on the campsite near Mostar.

Every town or hamlet has a cemetery … we assumed cremation is not an option here as there were so many and some really huge.  We didn’t wander into any cemeteries, but we are sure there must be quite a number of graves from the war.

Food and fuel are cheap … really cheep.  I googled a groceries indices for mid November.

And we filled up both diesel £0.84/ltr and LPG £0.38.  We ate out twice and both food and wine was inexpensive and good.  Portions huge.  Grilled meat is the norm and the Blatina red particularly good.

Mostar left me a bit cold; far too touristy,  I particularly liked Jajce and the drive up along a gorge and over a snowy pass was beautiful  Tourism does not really seem to have stepped up in most places.  For instance the WW2 museum in Jablinca was extremely dated and our £2 entry was collected by a wizened lady who could have been one of the children used to carry wounded over the bridge before it was blown up.  we did not see much evidence of marked hiking trails, but we could have been in the wrong areas.

Dogs:  not on busses and Mostar restaurants said no to letting in Oscar.  But in Blagdaj and Jajce, he was allowed in cafes and restaurants, but not museums.  Quite a few wild dogs in places and more dogs tied up as guard dogs.  Oscar also startled a rat Jajce – nice.

The people we spoke to were engaging and helpful.  We had a good lunch and shared drinks with locals in Blagaj.

We would go back and explore more of the interior and north … but in Spring or Autumn.  I certainly don’t feel I got much of a handle on BiH.