We left our campsite of 6 nights €19 ACSI rate, having said adieu to Julia and Simon – Dave had left earlier….  We felt slightly institutionalised, but that may have been the 10 days with no alcohol free days!
Tried to visit the Kastel, but really heavy rain so we did not fancy the short walk up to the castle.
Off to Lidl for a nice big shop.
A shortish meander to Katacolo a nice small harbour for the overnight – walk in the rain…..no coffee shop would accept our Oscar – but all the town dogs adopted him readily!  We faced into the wind which blew all night long……some wine and carb-free supper to go with the fitness regime – and tomorrow back into alco-free days again, although we will celebrate New Year – with more new motor homing friends further south…..
Oh – and a big hello to young Jim and Nancy who have discovered our blog in USA/Canada….. In Jordan, we used to play Scrabble and Jim would bring a bottle of Scotch (Chivas Regal) which I took more than a passing fancy to – sometimes they left me asleep on the sofa – with a Scrabble note of goodnight!!!

Katacolo:  a few fishing boats but the town exists to supply the massive cruise ships that dock here for Olympia.  Even the interesting sounding Museum of Greek Technical Inventions was only open 5 random days in December … to coincide with the cruise ships probably.

Nose into the wind.

To Ancient Olympia – home of ‘The Games’ since the 1st century BC – they competed in the nuddy!  Did they have veteran athletes?  (By the way, the World Veterans Track and Field Championships will take place in Malaga in September 2018 – I ran in the Worlds in Newcastle in 1999…..maybe?).  Naked, James?
We saw the sanctuary of Zeus and birthplace of the Olympic Games, to honour him.  776BC was the first recorded athletic event, although archaeological findings on the site date to 8000BC.  The last Games were held in 393AD after the recently converted Emperor banned pagan activities.  First revival was 1896 in Athens and the Frenchman, Baron Piere de Coubertin, who championed the revival, has his heart buried here.  The €6pp winter rate for the site and museum was excellent value.

This is the stadium at Ancient Olympia.  Mike of Moho-dreamer, who we spent Christmas with, was photo’d on the starting line …. I had to go one better and I ran the length!  With umbrella and camera in hands and wearing full waterproofs and walking boots …. bet not many Olympiads could match that!!!  From 720BC athletes competed naked … far too wet for me to do that!  Men only too. 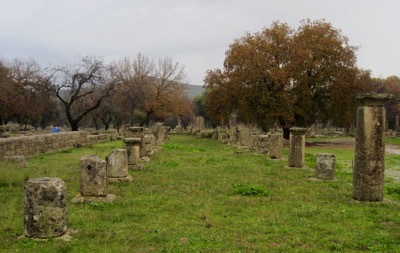 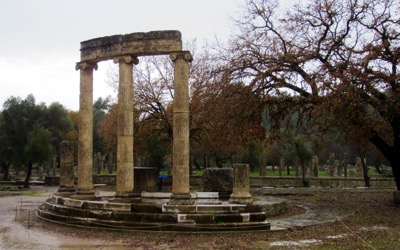 The info board only told us who paid for it’s repair … the guide book tells us that Phillip II commissioned it to honour the Dynasty of Macedonian Kings, so surely this is later? 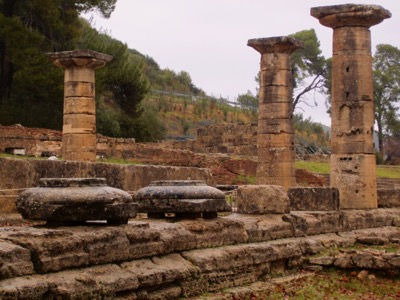 The Temple of Hera 7BC 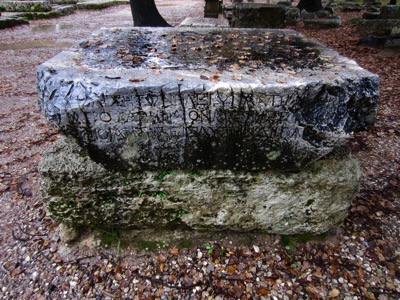 Public Shame:  The Games embodied the ideal of fair competition among free and equal men.  Those caught cheating had their name, crime and fine carved onto one of the 16 bases of statues to Zeus, which line the route to the stadium … let that be a warning to others.

Gate through to the stadium:  Capacity of 45,000.  The main sports venue for running, wrestling and pentathlon etc.   Chariot racing was next door.  The Stadium was only unearthed by the Germans during WW2

Temple of Zeus 5BC, as large as the Parthenon

Atlas and the Apples of Hesperides:  Hercules, centre, holds up the sky, Athena on the left, assists him and, right, is Atlas, who has brought back golden apples guarded by the Hesperides Nymphs.

Springs of Kaiafa is our overnight spot:  a bit of a smell of sulphur, but tarmac to park over is good after heavy rain.