The lady in the TIC had mentioned a 7 Ladder Gorge Walk.  Kerstin and I are old hands at this now, so it had to be done!  J nobly stayed home with CO2.  A walk up to the start of the canyon.  A lot shorted and easier than the other Slovakian one and the max ladder climb was 15m.  The ladders and handles seemed a lot more secure.  Pretty. 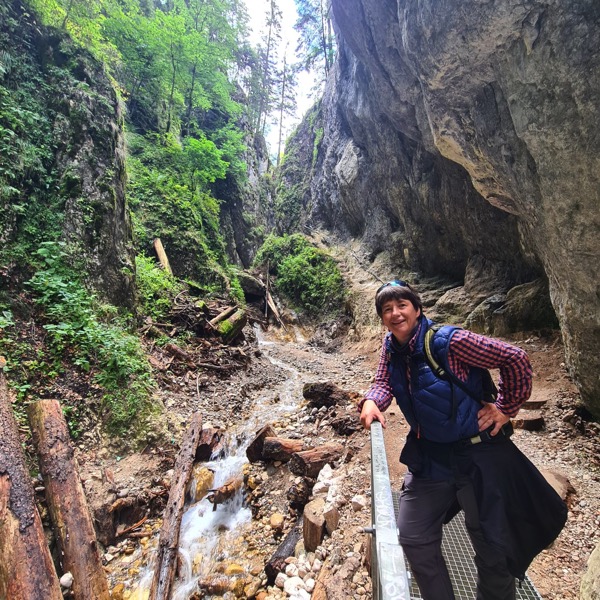 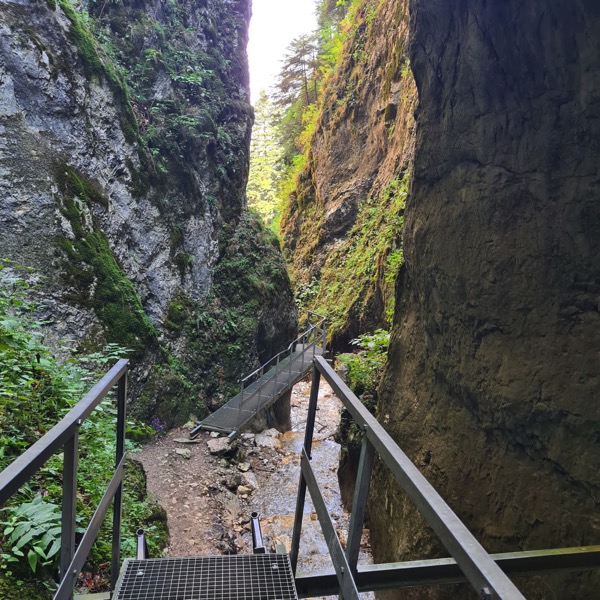 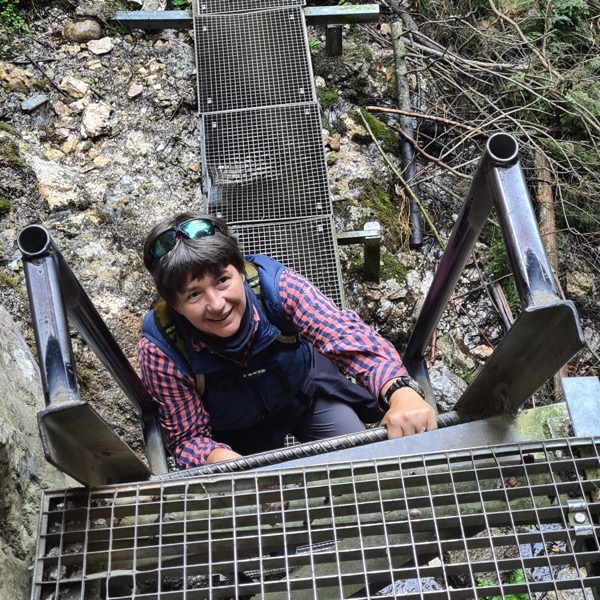 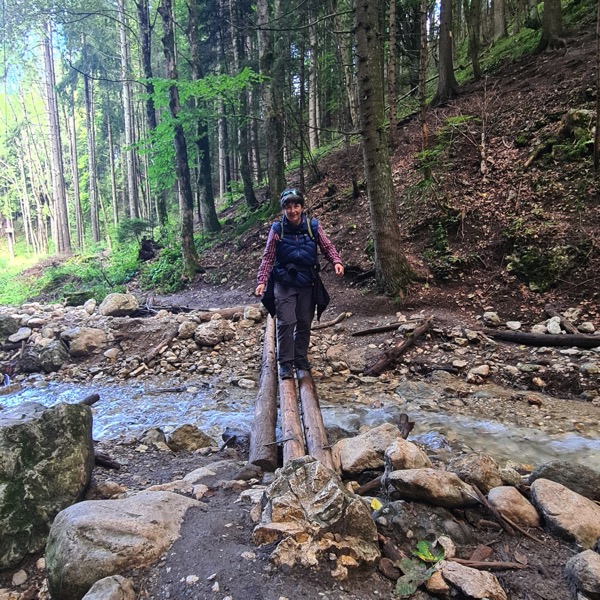 But the real adventure started on the descent.  We could have walked down, but why do that when there’s a new experience to try.  Zip lining. At only EUR20, it seemed a reasonable price too.  Although it would have been quicker to walk down.  Didn’t know it was on my bucket list of things to do, but it is now firmly ticked off.  And after about 20 of them, I felt done, but had to complete the course of 40-45 zip lines.   On the first line, I failed to land on the platform and had to turn and then hand over fist to haul myself back and up to the platform.  And of course this was in front of all the people waiting! 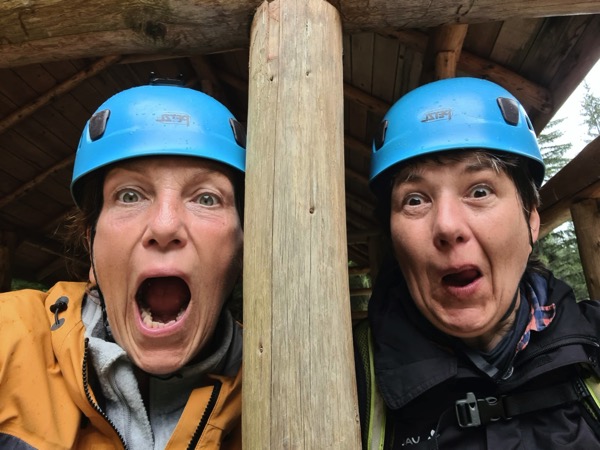 What have we ‘chosen’ to do? 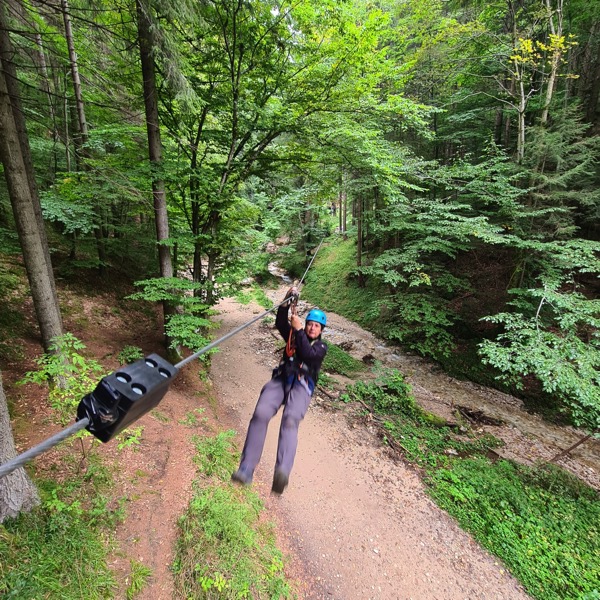 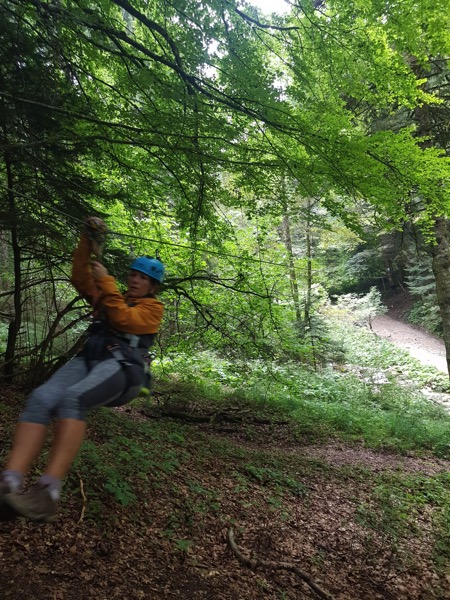 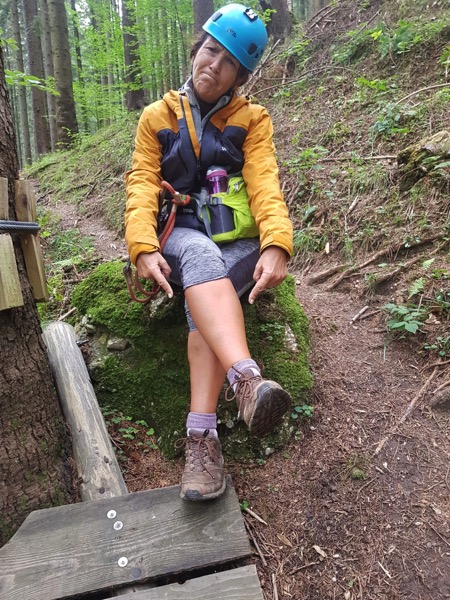 One injury.  I caught may trailing foot on the platform.  Resulting in a slight ankle sprain and a shin bone bruise.  Kerstin had and interesting landing technique … if there was a cushion on the tree indicating a fast landing, she opened her legs wide and straddled the tree trunk.  Her bruises were consequently on the inside of her legs!

Don’t we look the pro’s now?

Supper out.  Limited choice within easy walking distance, unless we fancied a burger … Not!  Hungarian in Romania.  Kerstin and I made good choices … the Goulash soup was a meal in itself..

Will She Ever Get Home?

Last night Kerstin had attempted on multiple devices to check in for her afternoon flight to Stuttgart.  Only when she used the MacBook did the flight show as cancelled.  No email from the airline!  And of course the help line just refers one back to the website.  Grr.  Last minute flights with alternative airlines costing an arm and a leg.  So Kerstin booked a lunchtime flight from Budapest tomorrow via Istanbul.  Just as well she had booked the same airline for both flights as the flight arrived late in Istanbul, missing the connecting flight to Stuttgart.  She was put up at an airport hotel but didnt get any opportunity to explore Istanbul by the time she had cleared customs.  And fortunately she had brought her passport, as she needed it here, although within EU she can travel freely with her German ID card.  She let us at lunchtime today as it is a 3 hour rain ride to Budapest (no such thing as high speed trains here), spent the night in Budapest, a second night in Istanbul and messaged she was on the train to Reutlingen the next evening.  A 2.5 day journey!  This is Europe.  Why are things no longer working as they should?  Don’t get me started on service levels!

In the afternoon, J and I wandered into the local shopping pedestrianised street.  High rises either side.  Most of the shops had closed.  Lots of graffiti and broken paving slabs and positively dangerous crumbling steps.  We had a too sour lemonade whilst two Romanains drank 3 beers with chasers each.

The better section of the street was in sun.

In the guide books and marked by the lady in the TIC, but we had low expectations.  Started to feel like we are scratching the bottom of the must do things around here.  A sure sign that we have stayed long enough here.  However, the fortified church was lovely.  Peaceful. 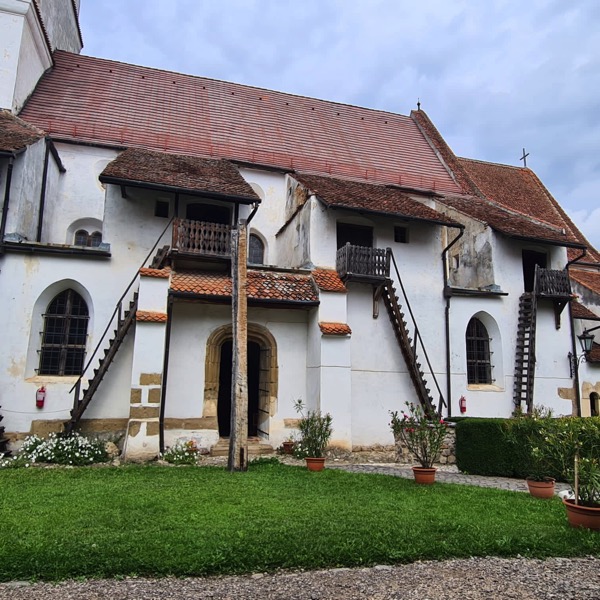 Ladders up to rooms … not allowed to climb these! 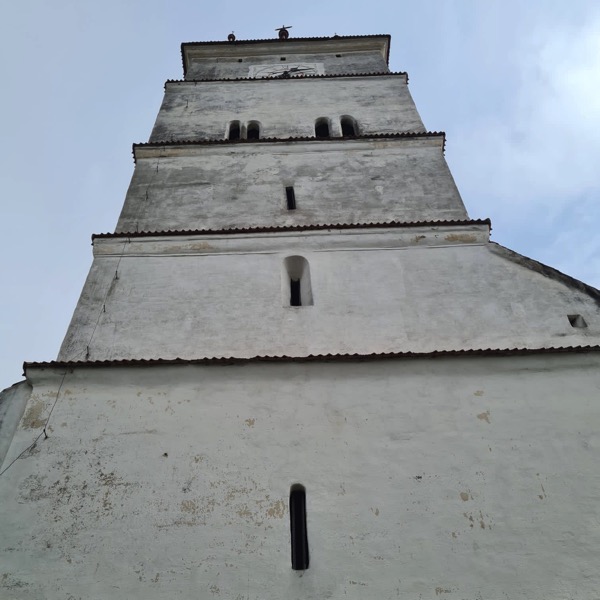 Massive thick stone walls and you could walk through the top in semi darkness.

My crew waiting for me … O ever anxious. 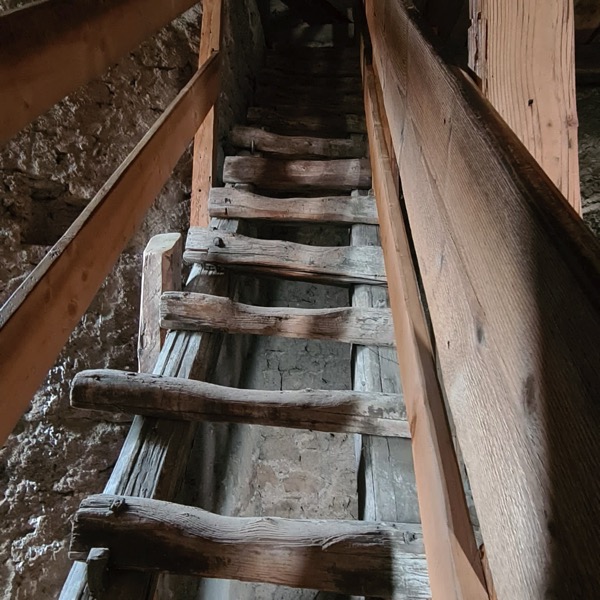 There was a tower to climb, and I was conscious Kerstin would have encouraged me up … so up I went.  Dodgyy steps and dark … worthy of a gorge.

Got down just in time to avoid my ears being assaulted by the on the hour bell.

We failed to find anywhere for a spontaneous lunch and so had our meagre packed lunch and drove over the other side of Brasov for a walk.  A short walk as it was raining quite heavily by now.   The area is known as Solomons Rocks.

We felt for the families using the organised BBQs and tables in the rain.  Not all were covered. 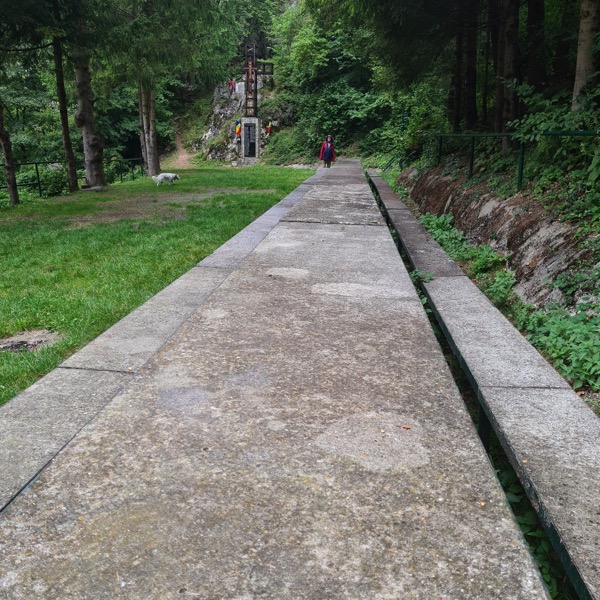 Not a path, but a looong table and benches.  There were war memorials at then end. 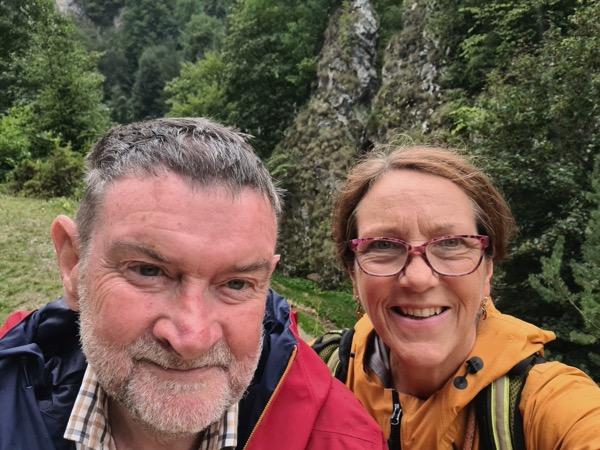 We had been told this was worth a visit. King Carlos 2 had used the town as a summer residence and then had his own castle built.  The noble and wealthy followed, building their own graceful residences.  A local told us the town mayors have always had a tight control on planning thus ensuring the elegant nature of the architecture is not spoilt.  What we hadn’t realised, until we tried to park was that it was the town festival.  So it was buzzing with life:  people, music and food stalls.

Sadly our car was bumped whilst it was parked up.  Someone had kindly waited to pass on the reg number of the perpetrator, who apparently refused to stay or leave his details.  We contemplated informing the police, but a) proving it if he denied it, b) the hassle, c) the changes of getting recompense – low, and d) our excess is EUR650, so not worth making a claim.  Much as we hate for the bugger to get away with it, it was not worth pursuing.  Karma will get him!

Coffee and 2 kinds of cheesecake … yummy!

Loving the tin roofs, but probably not the quietest in rain. 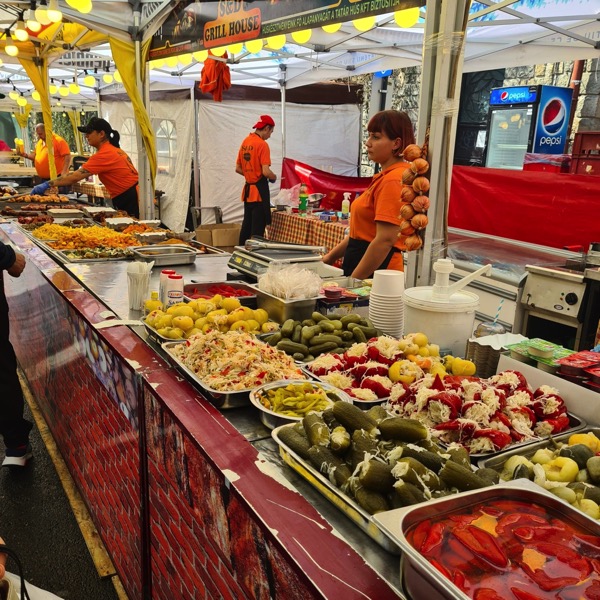 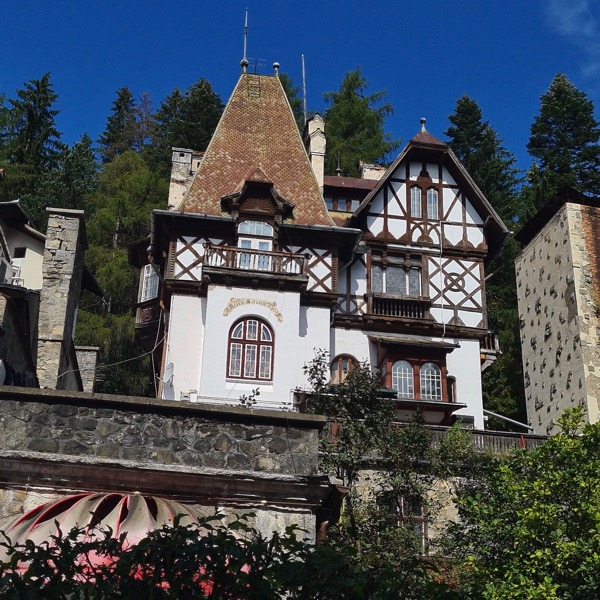 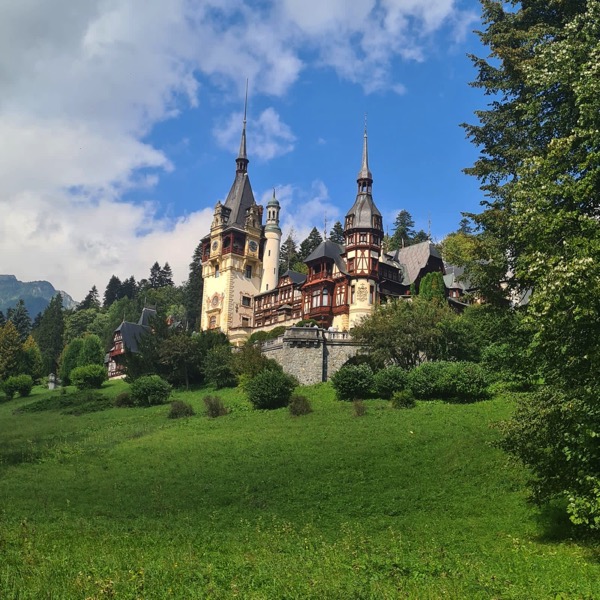 King Carlos’ Peles Castle.  Couldn’t go in as J stayed down in town and I had CO2 with me. 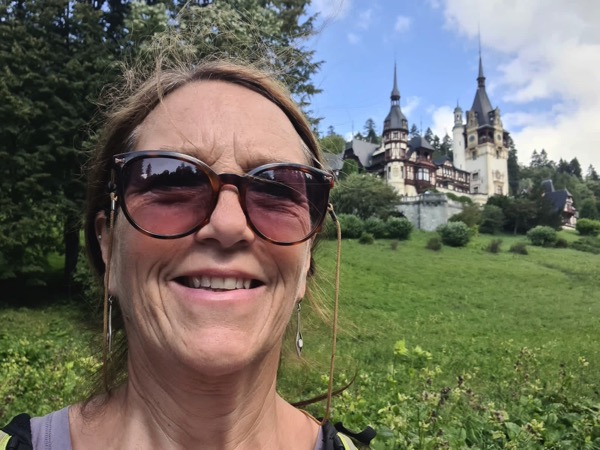 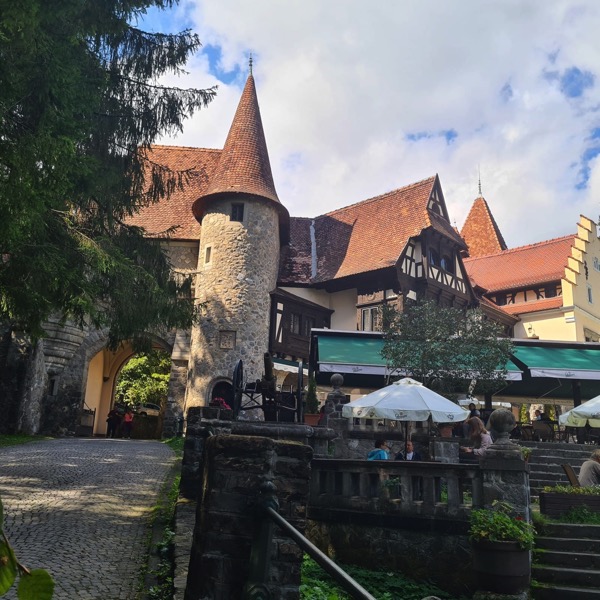 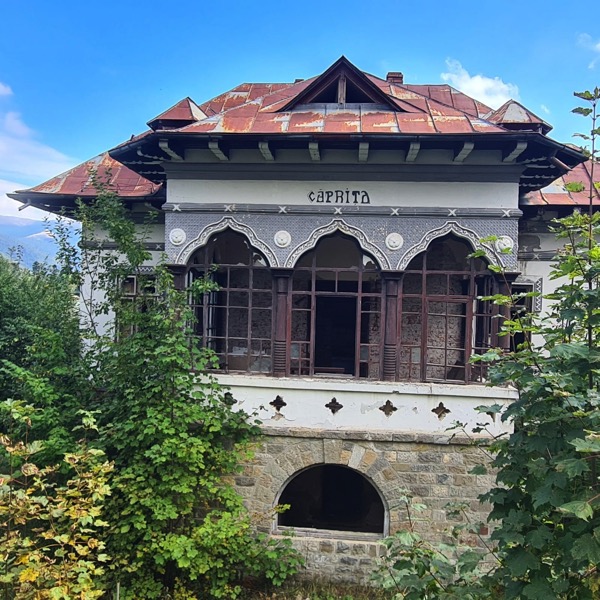 Last Day in Brasov and a Close Shave

We had a slowish day … loading some stuff into and on the car.  In the afternoon we wandered up and over the base of the hill to Brasov old town.  Found more old streets and engaged with it a lot more than we had when we arrived in Brasov.  One of those where you go with the flow … Brasov City’s festival day … not a patch on Siaia yesterday’s efforts, but a good vibe.  We had a glass of wine and decided to stay in town for supper.  No supper for CO2 with us, so into a supermarket for a purchase of Pedigree Chum, which normally gives them the squits!  Ho Hum … fed off the pavement.  What started as a twilight walk back over the mountain ended up as dark stumble.  Thank goodness for phone torches!

Yes, J is sporting a rather short haircut.  We’d bought a replacement beard trimmer yesterday.  It does hair too, and not having been happy with the styling from the Bratislava hair cut … I had a go at it.  Now I am used to doing J’s hair … usually do it with the dog shears after I”ve pruned Oscar!  Did a good job and just checking it over … oooh missed a bit.  Grabbed the shears to trim …. Oops … wrong guard on it…. a very short stripe on top  So had to give J a prison cut all over!  Thank goodness he’s not a vain man!