If of a squeamish nature … skip this paragraph!  The plan had been to buy some LPG and some Sardinian goodies before our mid day crossing to Corsica.  But a certain person who shall remain nameless had toilet trouble.  Mum, James and I have all had on / off diarrhoea … and a dose of Imodiam 3 days ago had left J completely blocked up and uncomfortable.  Senakott the previous night had brought on tummy palpitations  … no more detail required.  But note to self is that only take Imodiam if absolutely necessary and only in less than the recommended quantities!  Don’t think our issues have been anything to do with all our medicines being long past their use by date!  Second note to self … restock medicine bags before next long trip in September.

We made it onto the boat for the 1 hour crossing and back in to Corsica.  We headed about an hour down the road to a campsite walking distance from the town centre of Porto Vecchio. Fairly basic but shade and a pool … and a toilet!  Two loads of washing that evening followed by 3 more the following day.  Normally I would have deployed the twin tub, but I had towels and bedding from Maddy’s stay, beach towels etc … I even washed our mattress and pillow protectors … not because of the above paragraph I hasten to add, but as I didn’t want to turn up at my sister’s house in France in 5 days time or the Aged P’s house at the end of the month with several sackfuls of laundry which would have smelt like a land refuse site!

We walked into Porto Vecchio late the second afternoon … a leave it place.  Much hyped as being a yachty harbour, old town with quality restaurants and a stunning night life.  The only thing that was stunning for us (eyewateringly so) was the two scoops of ice cream at EUR5.5 each.  Back with French high prices and even more so in Corsica.  This was borne out again when we paid EUR1.10 /ltr for LPG – almost double what we would expect to pay!!! 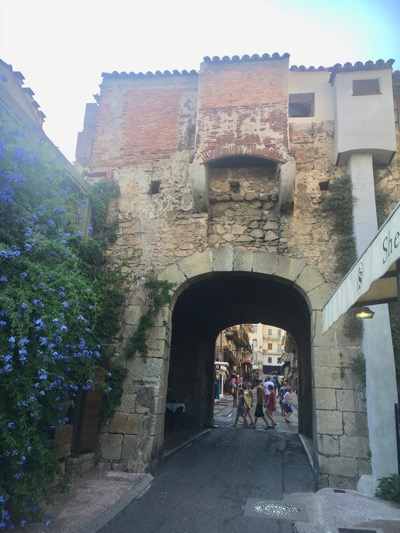 We did a mountain route to start our northward journey … through another area marked by the lady in the Tourist Information centre from when we arrived in Corsica.  Being the weekend, most of the Corsicans had had the same idea, but it was easy to see why.  Stunning mountains, marked paths, lakes, rivers … we have marked this a a spend a  week exploring for when we come back to Corsica.  We had a yen to spend our last night by the coast and I’d found a camperstop just south of Solanzara … at a mere EUR11.44, and the .44 was Tourist Tax.  This was amazingly good value given all the pukka campsites would have charged about EUR50.  16amp EHU, marked pitches and a rocky beach either side.  35 pitches with an electronic entry barrier.  And ONLY US plus one permant chappie who obviously lived in his 5th wheeler and worked locally.  Sunset, sunrise, stars and peace.  We sat and watched the leisure boats in and out of Solenzara.  We stayed till our 24hrs ticket was almost up and then drove the final leg northward along the eastern coast … flat and campsite after campsite … not the best Corsica has to offer.

Our ferry leaves at 8.00 a.m. Monday and we are supposed to be at the port 2 hours before.  A campsite would not have the barrier open this early, so we had no option to wild camp … Park4Night had a few spots up the mountains from Bastia … we found ourselves in a car park at the top of a mountain pass, but only 16 km from the port.  Not much sleep.  A farmer in his pickup was up and down the road and dirt tracks by us looking for his cattle who’d escaped.  The carpark was by a hairpin, so numerous cars ripped their horns as they approached, despite oncoming head lights that would have alerted them.  Oh, and the idiot who likes to wheel spin in gravel car parks.  Silence eventually prevailed at 2.00 a.m. and alarms went off at 5.00!  Ho hum, we’ve booked a cabin for our morning crossing.

We had a coffee stop by this reservoir … the tree stumps had not quite disintegrated.

One of the rocky beaches at our camperstop.

So our spontaneous (an Easter Sunday conversation about where to go after Germany) Corsican and Sardinian adventure ends.  62 days spilt evenly between the two islands.  My phone has travelled 6,273 kilometres … van and by foot.  When we win the big Premium Bonds prize, we’ll come back to Corsica …. the scenery is always what wins it for us. 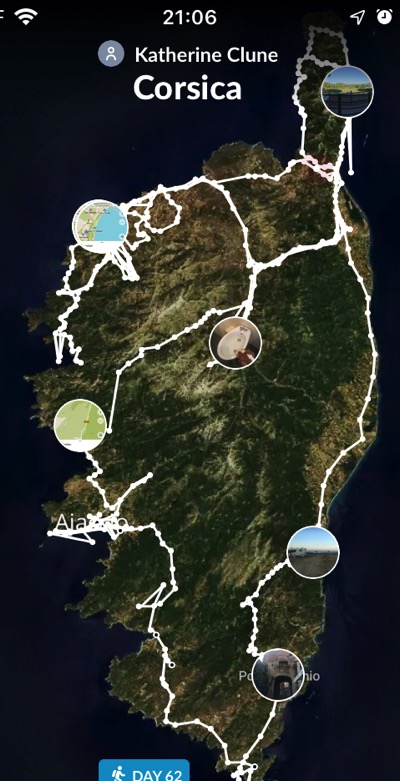