We have got so far behind with our posting … Blame it on the Boogie!

The wind was – Scottish islands quality….. robust – which means rather strong!  We manoeuvred Jez for a better angle, and slept. The wind had abated during the night and we set sail towards Loons Hide. We didn’t see lots but plenty of birds and waders – we managed to catch one in flight – a seabird/Common Gull?  The remarkable thing is – several pairs of expensive binoculars on the desk – not chained down and an open door. Could that happen in the south of England – no. But I’m being hard – there are many more millions of people down south…and it is our ‘home, generally.

Warwick Head was even more robust in the wind so – walking aborted after J blown against the barbed wire fence and we all risked a sudden decent over the cliff edge.  Nanny naps much needed after the recent festivities….

Loons Hide:  Others had told us they’d seen otters … we just saw common birds, like gulls, ducks and coots …. but it was very windy.  The hide was furnished with not only bird and flower books, but a couple of binoculars, which were not even chained down.  What a different world we live in up here.

Marwick Head:  the pic does NOT show how windy it was.  We were OK until we started up the cliffs at the far end of the bay … J was blown onto barbed wire and my flared jeans acted like sails so I had no idea where each foot would land.  We aborted a fair way up. The dot on the hill top is the Kitchener Monument.  Despite high seas, Kitchener and hundreds of sailors set sail with a hold full of gold bullion to bribe the Russians to stay in the war.  The ship founded here and Kitchener and 600+ men died.  The gold was not recovered (!).  Although Kitchener was popular with the masses, he was a bit of a sod … he created concentration camps in the Boer War and was harsh in Ireland following the 1916 Uprising.  Local Orkadians put up this monument. 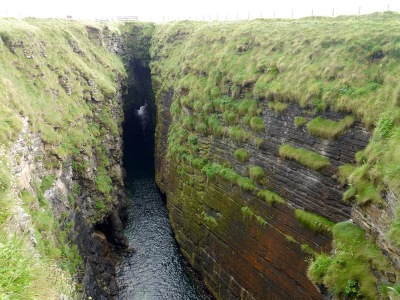 The Gloop:  a sea cave that caved in … pix does not show how long it is. 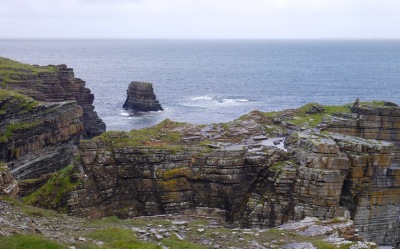 More sea stacks and a great coastline on our often very wet walk. 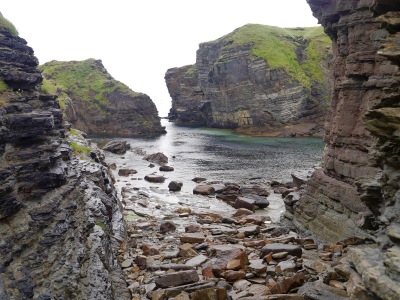 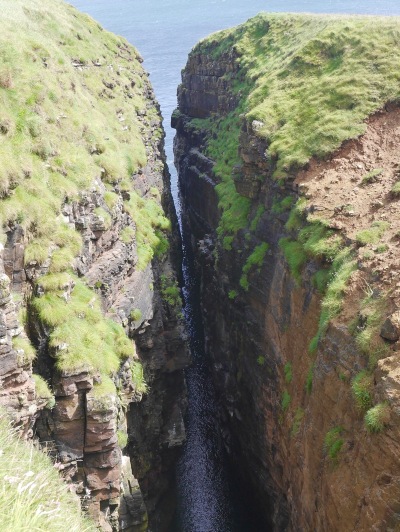 We hoovered over this geo (natural chasm in the cliff) as it was sheltered from the wind and the sound of the nesting birds echoed up to us.  Quite magical.

We had planned to sail to Hoy for one day but – our spot was so pretty and sun shining that – we stayed put for a whole day – what luxury….

I got to sit and knit as we’ve been too busy … and the sun came out to I even divested one of my many layers.

I blagged a cod and small haddock from a fisherman, he refused to take any payment, but seemed surprised I was happy to gut myself. 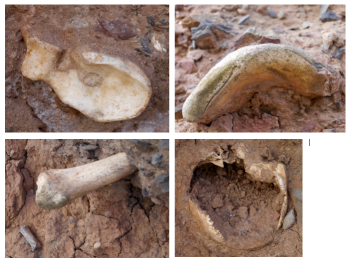 Guess the body part.  A local dog walker told us that there was Viking mound, remains of a monastery with its cemetery slipping into the sea at the other end of the beach.  I was going to bring a fibia (Ithink) back to James but Oscar seemed to think it was a stick for him … seemed wrong somehow to allow Oscar to play with a person’s bones, so I left it behind.  Think J was relieved. 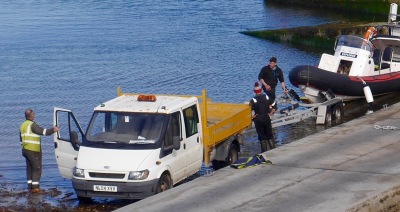 Northern Lighthouse staff had commissioned this boat to take them out to and island to service the lighthouse.  The boat’s alternator failed and they had to get a tow back to the mainland from a passing leisure craft.  Whilst they tied to get the motor going they did not notice the tide going out … there was no way they could get the boat up onto the trailer and the van’s real wheels were just spinning.  About 6 hours later the tide was back in enough for the boat to float and the poor chaps got off … we did offer them a drink.

Whilst the stranded boat waited, we BBQ’d.

St Margarets Hope village is pretty but the wool K wanted was too expensive. Campsite back at Stronmess again – oven baked cod, washing and cleaning.

Huge sadness at leaving the Islands but – “haste ye back”… and we definitely will return… and do some island hopping.

Arrived at the ferry to find that our booking was for tomorrow – ooops! (K:  And I pride myself on my organisation!)  But they were not busy, fortunately.  When our friends left on Monday the 1.5 hour trip took 3.5 gale force hours!  Pancake flat for us 🙂

Sromness with Hoy in the background.

The Point of Ness Campsite. 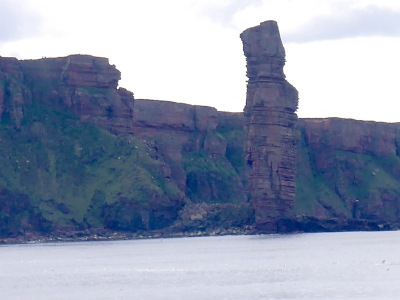 The ferry passed the Old Man of Hoy.  We will definitely do some island hopping when we have more time.

… served with Stornaway black pudding, bacon, onion & cabbage mash and a sherry sauce.  Neither if us managed to finish ours … such a shame.

Margaret and Shirley – do you recognise this?  We stayed at the RSPB Loch of the Lowes.  There was a beaver talk and apparently an obliging beaver swam past the group.