The big day has come – the start of Summer Euro 2017 (not footie) mini tour!  Finished laundrifying at Royal Rothbury, filled with LPG in Guildford and started to a wild camping spot on the coast near Folkestone. Well, the lanes got narrower and narrower (are we in Sicilia?) – several farm vehicles and no suitable sites – so, back to good old proper aire at Canterbury New Dover Road… and only £4.00.

The train terminal was busy even without the school hols – this week to commence. La Belle France – joy – straight on to free motorways.  Robin and Kensey awaited (Oscar’s latest diary preempted this – he couldn’t wait…). K and R went to town and wined themselves (K:  Only 1 glass – a rather pleasant little Bourgone Aligote).  Supper – and evening saw 30+ motorhomes in situ!!!  Obviously the place to overnight close to Calais.

Nice early run – trying to up the mileage (or kilometerage) – successfully…  Coffee in town and then R and Kensey left for Calais. So nice here, we decided to stay until tomorrow – knitting, reading and resting under the awning. Parfait!   Wouldn’t normal roll out the awning on an aire, but it was blinkin hot and quite a few had done so.  K even got the twin tub out … we will need to replenish our water soon.  So warm that the laundry all dried within hours. This sun is what we came for after the cold and blowy Scottish islands.

Mini shop, diesel fill, an aire on the border with 100ltr water for ERU3, and off to Poperinge we popped to a nice compact and central car park that takes motorhomes for a max of 48 hours. This town is a the centre of a hop growing region and WW1 troop transit and field hospital areas.  We visited a local bar for Belgian beer (a new experience – the beer not the bar – we passed the ‘Bar’ exams years ago!). Are we “Baristas” or just old socks, sorry – soaks.  The Talbot House provided front line troops with a haven – a piece of home for a few days – chapel on the top level. The UK couple who volunteer there for short periods said that people have detected a ‘presence’ in the house occasionally – not surprising as many of the young men who visited never came back.

The local brewery museum was fascinating – hundreds of beer varieties – up to 12% alcohol by volume!!!

We took turns at the Hop Museum to hop (!) knob with the rather merry locals. 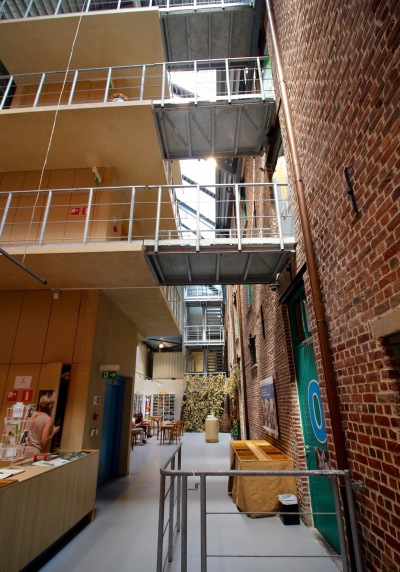 The original building was the hop drying building.  The museum thoroughly explained the whole process using an audio guide.

Talbot House:  Originally a private house, it was rented to provide a sanctuary for all soldiers, regardless of class or rank.  The strongest beverage served was tea.  The towns streets apparently were awash with drunken brawls and prostitutes.

Will the cowboy in the reflection, take heed of these rules?

The Chapel up some steep stairs.

The rear garden, which at times had soldiers sprawled everywhere.  A real sense of peace.  Tea and coffee served by volunteers, who also provide breakfast for overnight guests.

Check out our different cafe choices!  Not a pang of regret on either side.

Walking in a town park, K spotted a notice for a party tonight in the same park – instant decision to stay an extra night – because we can!  Obligatory coffee in town square. The Chinese Labour Museum told the highly unusual tale of almost 95,000 Chinese labourers recruited by the British army to work in Belgium on the war effort – most evocative stories through original photographs. Now , we don’t really mind rain (San Sebastian, Gibraltar, et al) but it was a great excuse to shelter whilst having a good lunch and sampling some more Belgian socks – damn, that old soaks thing again – beer!   Wunderbar….

The Park Party was – incredible!  Loads of families – beer ,food and good chatting to locals – inspired by our gentle “hund” in Flemish – dog, Oscar. It was ever thus. Professional dancers led and taught many local couples in Swing, Lindy Hop, Waltz and Jive.  Again we commented how mad UK Health and Safety has gone.  Candles lit on table in jam jars, logs burning in open braziers and beer served in real glass!  We left at 1030-ish still in some daylight.

We are really coming around to the Belgian people – lots have been extremely friendly and helpful and they are super dog friendly … Oscar is allowed in museums!  One local lady gave a recommendation to visit the Trappist Monastery – makers of world class beer – and holy men too!  That’s our destination sorted for tomorrow then!

Quite sleepy now and hard to envisage all the troops marching through.

We saw the jail where rowdy soldiers were incarcerated with their graffiti carved onto the walls.  It also was the place of the last night for 4 soldiers who were executed in the square of the town hall.  Overall 3,080 British soldiers were sentenced to death during WW!, but ‘only’ 346 executions took place.  90% of them have since been pardoned with posthumous apologies to families.  600 men were executed by the French (not sure of this includes the 2 random men shot per regiment when they refused to advance after the awful losses at Verdun), only 48 German and 750 Italians.  No recorded executions for the Australian army as they so not use it as a form of military punishment.  Many of the deserters were put back with their regiments, who were unsympathetic.  77% of the executed soldiers were for desertion.  Other crimes were cowardice (5%), mutiny, insubordination, falling asleep on your watch, throwing away your weapon and striking a superior officer.

This poem translates as:

The worn out night bursting open in my chest and fading.

My hands holding the glass –my last one.

The priest bringing his God, the doctor his opiates.

Out there she’s warming her feet against the coal.

Out there she’s turning in her sleep.

Aim at the white cloth on my chest. 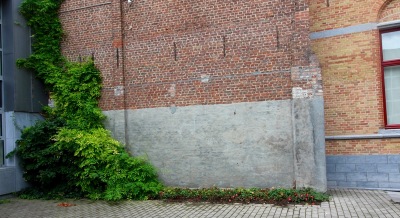 This was the actual wall.  We only knew this as we ear wigged a knowledgable English chap doing a tour for some friends.  He’d served and lost friends in Afghanistan, been a policeman in Guildford and now worked for United National Peace Keeping.

Back to beer as an aperitif … comparing Blonde and Brun Leffe.

Our own Strictly Come Dancing – they got quite few folk up learning steps.

Some locals were in shorts and a light jacket … J and I, from more Northern climes, had full winter layers.  Oscar coming up for a tummy rub!

We visited the Lijssenhoek Military Cemetery and we were immediately saddened to see the grave memorials – from age 19 to 42 years young. So many lives lost in this “War to end all Wars’ – did it? No, tragically. A modern visitor centre with audio witness accounts … very moving.  A famous war poem comes to mind…

“They shall grow not old, as we that are left grow old

Age shall not weary them, nor the years condemn

At the going down of the sun and in the morning

we will remember them.”        Robert Laurence Binyon

We arrived at a brand new aire in Westvleteren near the above recommended Saint Sixtus Abbey Trappist Brewery/Monastery…..  Euro12 with electric is reasonable value – highly recommended, as only 1.9km from the beer.  We supped prime Trappist beer at the Cafe across the road from the Monastery – the Brewery and Monastery are closed visitors. They only brew enough beer to support themselves, and yet the 10.2% proof version is in high demand having been voted the best beer for several years.  It is only sold commercially the the cafe or via the small shop there.  Today the shop had signs up “No beer for sale today” and reading Trip Advisor, you have to be quick when it is available as queues form quickly. If you really want to buy some, you can ring the hot line, but the monks only answer it occasionally and book for months ahead to come to the gate to collect your two cases limit. 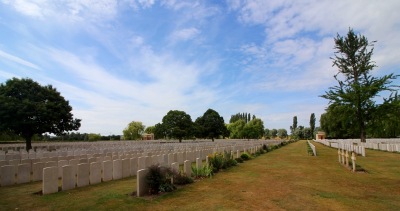 Some countries repatriate their fallen .. French gaps on the left. 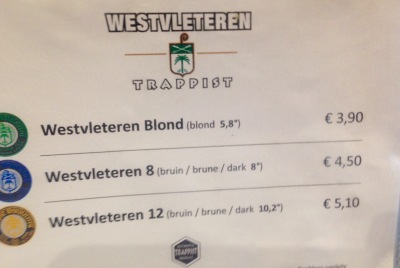 Only 6 breweries in Belgium brew Trappist beer and it has to be on the premises.  Bottles are unlabelled, but the caps are colour coded and contain legal information.

J went for the blond and I threw cation to the wind and went for the Westvleteren 12 … 33 ml bottles so equivalent to a third of a bottle of wine.

Spotted a Belgian Welshie … we saw another one in Ypres, but he went for Oscar … must be a breeding nest of them nearby. 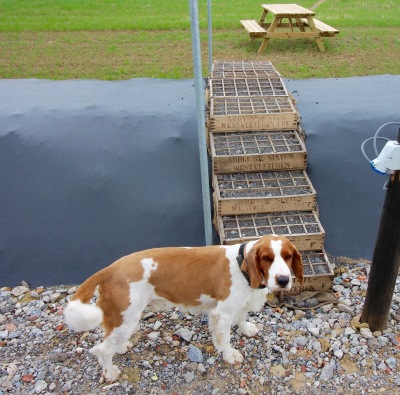 On the camper stop, steps made out of the beer crates.