We – K, J and the redoubtable Kerstin headed out of Ljubljana to the north….. stopped at the beautiful medieval town of Skofja Loca – really helpful lady at the local Post Office – many photos and a nice walk.  Also really helpful lady at the Tourist Info, who suggested we leave Chardonnay in her parking and recommended a mountain drive onward off the main route to Bled.  Do you sense we like the Slovenians?

Our Lunch Stop:  very easy, as everything you need is on board.

Thence we pointed the van towards Bled – a lakeside town that promised to be a bit like Cumbria. It is – Like Cumbria on an August Bank Holiday – tens of thousands of people and their cars – all looking for the not too many parking spaces.  Camping Bled was our destination – home to 750 folk in the (now) high season – we thought there were more than that…. we found our pitch and KX2 headed out to walk in the rain to the lake…  J offered to babysit the van and push out some Zzzzzzs – quite successfully of course.  The campsite was overcrowded and in the morning, there was no hot water for showers – which drew a strong complaint from K1 on our departure.  Not that the staff cared, but K got her revenge with a poor review online – that felt good!  Bled is very cute but not the campsite…

K2 shared a Bled cake, which J missed out on.  Rather like a vanilla slice, but a little stodgier.  I generously allowed Kerstin to eat most of it, and this was after she had consumed a panini!

We fled Bled and drove the hairpin road to Vinegar Gorge – found parking and started the 30 minute walk to the end of the Gorge – and a waterfall – waterfall number 5,000 in Slovenia?  The UK Health and Safety Executive would condemn the walkways and little bridges and empty the Gorge. The obligatory coffees and ice cream at the cafe near waterfall…..  We did well arriving early as the walkways were narrow and coach loads were arriving as we were leaving.

As we were early, the mist was just rising off the water. 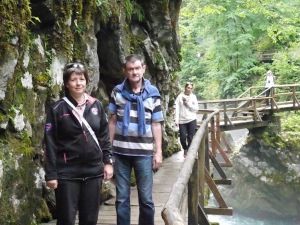 The long boardwalk along the gorge; built in late 1800s with difficulty.

Waterfall at the end, of course! 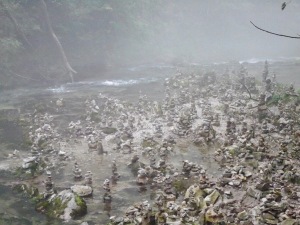 Hundreds of cairns and some were really creative. 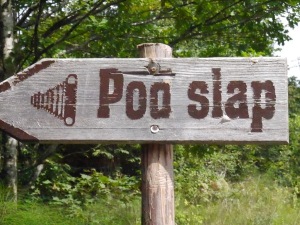 Not posted up any funny signs for a while …. this should actually had read ‘pod slap’, but some wag had doctored it.

Kerstin was booked on a train back to Germany from Villach in Austria – so naturally, we drove her to the station – passing through Slovenia, Italy and Austria – back through Italy and into Slovenia in one afternoon!

Found a lovely campsite – not crowded – and with hot water – at Kamne near Doverj!  And fast wifi 🙂   Relaxing BBQ and slept dreaming of the jobs on the AM horizon.  Zzzzzzs…..

Jobs and more jobs:  K scrubbed (up well !), polished and spat (!) and paid some bills  – J hoovered (hovered ?) and variously tried to look busy…  We did not move off the site – no time to!  We have loved being with family and friends for the last month, but we seriously needed some catch up time, so decided to stay put for 3 nights in total.

View from the campsite 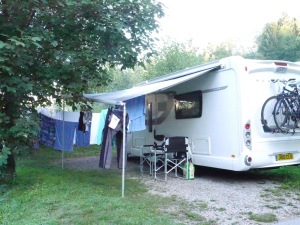 K and J ran – to whet the appetite for more jobs (?) – very hilly route some 2 miles – or 3 ‘kin-ometers!    Afternoon – a bus into nearby Kranska Gora – a ski resort. Nothing very much – but a peanut sized  glass of wine whilst awaiting the bus back to Kamne.  Bought fodder for a BBQ – K found some good value trousers in Intersport!

We contemplated the 49 hairpin bend pass to go south, but on the advice of the campsite receptionist, who spoke 7 languages and well, we re-routed … back into Italy and then down back into Slovenia.

Interesting border crossing just above a lake:  a derelict fort with amazing views on the Italian side and a monument and castle on the Slovenian side.  We did encounter hairpins, but thankfully not 49 of them! 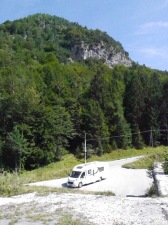 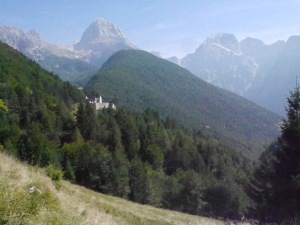 We stopped off at Kobarid.  We struggled to find a parking for Chardonnay, so we pulled into a business car park and J went to ask if we could park.  Initially the chap said no and then took pity on us and gave us an hour.  This was time enough to visit the WW1 Soca Valley battles between Austro Hungary (incl. Slovenia) and Italy.  We had no idea just how many young men died and were maimed in these battles.  It came across strongly that the Italians were ill disciplined and mis-managed … surprised? 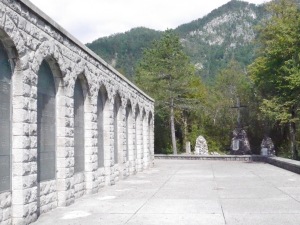 After a quick ice cream…. one has to have one’s daily quota!, we drove Chard up a very steep (and more hairpins) hill to an Italian memorial to the dead.  They moved the bones of about 7000 soldiers here and stuck a church on top.  Mussolini opened it.

Again, we were given really helpful advice by the staff in the museum.  K had read about a Historic Walk around the town, but was told that as we only had limited time in Kobarid, we should focus on the waterfall … haven’t we seen enough?  However, parked and walked to the Slap (honest, it’s Slovenian for waterfall).  The final corner was on another boardwalk.  If we thought Vinegar Gorge was a H&S issue …. it was nothing by comparison.  Rotting and slippery boards with not hand rail.  J declined walking this bit and relied on K to take the closer pix! 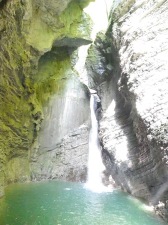 Postscript – took a wrong turn in a tiny village and a complicated reversing manoevre was required – K driving and J directing from the roadway, K was trusting his every instruction!  … J was watching for our overhanging bikes – but signally failed to spot the edge of an overhanging roof! Result – a gash in the rear side panel of Chardonnay!!!  Profuse apologies to lady owner of said roof…. J’s pride seriously deflated…

Parked up next to another British motorhome – Laraine and Stephen …. swapping stories.

After a good nights rest (J dreaming of van gashes) – K suggested a bike ride, walk – and a visit to Slovenia Vodafall number 5001 ! (Voda is water in Slovene). 12+ ‘kin-omters each way and bear in mind the bikes nor our bike legs have seen any action for a long time.  Mostly hilly – bike walking / pushing was introduced to conserve legs… Locked up bikes and climbed about 2000 steps up to a picnic lunch at vodafall and mostly downhill on the way back. 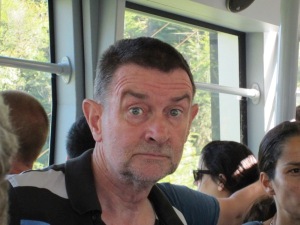 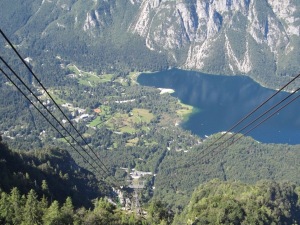 Stopped of at the Vogel cable car – really steep and very fast, up to the top of the mountain.  Views were amazing.  We could have done a hike up here across the high pastures and peaks, but strangely J was reluctant. 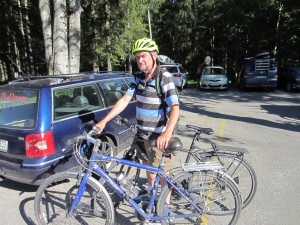 Ice cream stop – and one of those charming moments to wonder at… the rock face behind the restaurant was sheer – up to 100 feet (?). A boy of 7 or 8 started to climb up the face – belayed by his instructor – with anxious parents watching…  he clung to the cliff, using his hands to find tiny cracks to inch himself upwards – we just had so stay and watch with bated breath. He reached the top to applause from all the diners below – and then swiftly abseiled down to terra firma – a lovely incident.

We really liked Bohinj – much more than the famous, over crowded and slightly twee Bled. 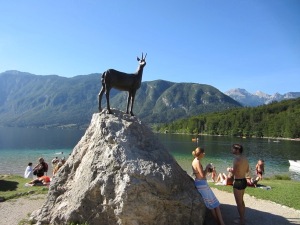 Legend:  The Stag looks after the area, but was shot.  It is invincible, but no longer shows itself to man

We finally pushed ourselves into doing a run.  It was a lovely route along the river that feeds Bohinj Lake, but we both struggled to put in any distance. 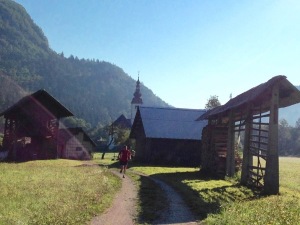 Can you spot that man at speed?  Another beautiful place to run.

Packed up and headed back to Ljubljana.

Our journey avoided hairpins; think we have had our fill for a day or two, but we drove through Bled and as it was not raining we took some pix on the move.  Being the last day of the summer holidays, the traffic was piling into Bled – we would never have been able to park had we wanted to! 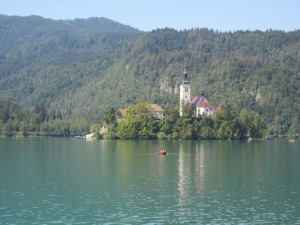 We stopped off at Radovljica.  K had read that there was one of the most interesting museums in Slovenia here … all about bees and bee keeping.  Bee keeping is really important in Slovenia (we were sold honey on our first campsite, see honey and honey liqueurs sold everywhere as well as loads of brightly coloured hives.  We learnt a lot and again, the lovely museum receptionist came and put the bee film in English on for us.  At only EUR3 each, this was definitely worth a stop off.  We are now bee experts … just ask us a question! 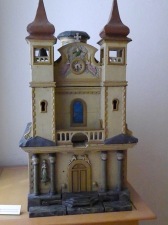 This is actually a beehive!

The town was Medieval and very pretty with Slovenia’s oldest bit of a moat.  Seemed a shame to leave it, so we found a restaurant with a terrace at the back over looking the valley and views to the Triglav mountain (Slovenia’s highest) and had lunch … would have been a shame not to!  Don’t we look relaxed!

Drove back to the Ljubljana CamperStop that we used with Kerstin about a week ago. Wifi around the restaurant so several glasses of white and J followed his Dublin Gaelic football team on the laptop.  Supper in the restaurant (I know – we are on a budget, and two meals out in the same day!!!), but the bill was all of EUR23 for the afternoon glasses of wine and the meal …. the over night would have cost EUR10 otherwise … seemed silly not to!

Having realised how rubbish our run yesterday was, we were up and at ‘em … and K actually ran little further than J – RESULT!  Only just over 2 miles, but hey, small steps!  Shower and breaky and off. Mein Host had kindly told K and indicated the route on a map to a proper motorhome repair place and thence we went.  We were warned that they were extremely busy … earliest we could be booked in is 16th Sept and they will probably need Chardonnay for 3 days and the cost will be in the region of EUR400.  Cripes!  On a mission to make sure Chardonnay is fully functioning, we then took her to the Fiat garage and booked a service.  Apparently at 40,000 KM, which we are at, we need filters etc changed … the bill will be a minimum of EUR400! Is EUR400 the standard quote for overseas motorhomes???  Given K just paid £400 for her Merc to be serviced (not even at Merc) Euros sounds much better and we hope the labour rates are cheaper.

Drove via a supermarked and stocked up – food and booze for at least 3 days, and back to our now ver familiar CamperStop.  As we pulled in … Laraine and Stephen from Bohinj were there …. lovely to see them again.  Loads in common.  Had the EUR8.50 menu with them (soup, salad and a meat dish – yummy and it mean we don’t pay for the pitch!)