No not wine!  An Arboretum.  After we ran and said farewell to Laraine and Steve (who actually thought we were having lie in – duh!), we set sail North.  We stopped off at the Volcji Potok ( you should hear hear the sat nav rendition of this … much amused by Sally Sat Nav’s pronunciation generally – cesta vesta is one of our faves!). It is the ‘largest and most beautiful arboretum’ quote from our 2001 guide book!.  Having been spoiled growing up near RHS Wisely, even K was much impressed.

If this were Football, I’d be shouting England 2, France 1 and Italy and Germany ZERO! 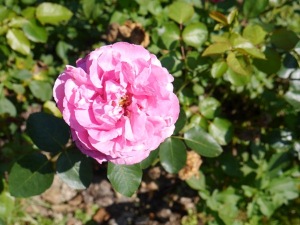 A rose garden, indigenous forest etc….  and all with a mountainous backdrop.

A really pleasant couple of hours and ice cream at the summer house!

Highlight? Most memorable?  The donosaurs!!!!!  Yes, seriously – scale and MOVING and BELLOWING dinos.  I know they have to entertain the kids, but do they have to make them so life like …. even some eye rolling!  K unnerved … and not just by what they were doing in an arboretum!

When we were in Ljubljana, the lovely TIC girl, when asked where she liked to go had indicated two place on the map and we set off for the first of these – Velika Planina, just north of Kamnik.  This is the ‘great highlands area’. top height is 1666m.  K had identified a campsite (not in all resources and we soon found out why … MINUS:  very basic at EUR22 (K negotiated a 10% discount – it all helps) … one toilet in a shed (clean and it flushed!!!), amongst trees and interesting manoeuvres to get Chardonnay in!    PLUS:  it was right at the base of the of the cable car we would take tomorrow and really peaceful.  Only one other (smaller) camper on the site …. interestingly a German married to a French lady, so K found herself badly switching languages.

Up and at ‘em again …. we caught the 9.00 am cable car.  Sorry, you working folk (very conscious my former work colleagues are back dealing with new classes, seating plans and new directives from ‘em on high), but it felt early to us!    The guide book states ‘ the six minute ride is not for the skittish”.   It was steep.  it was a long way. The cables looked very baggy.  Now James likes to have his feet on terra ferma and he was slightly anxious / disconcerted about this ride. 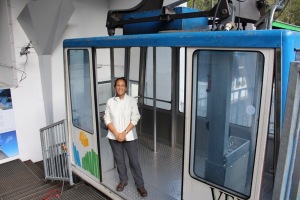 K happy to board the cable car, but J already shaking and it had not yet started its ascent! 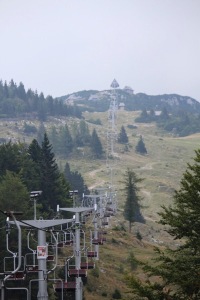 However, we then had a LONG chair lift ride, having been advised to get the double ‘get you up there’ package.  J mostly eyes just and gripped the rail.  Again this was a REALLY long ride, but it saved us a 45 min steep climb by foot.

Velkina Planina is where traditional diary farmers graze their cattle over summer.  It is hight pasture land. Mostly above the tree line.  The wooden round buildings were razed by the Germans, but rebuilt since.  Many are holiday homes, but a lot were still inhabited by the herdsmen, who wear green felt pointy hats.

We had not gone far before it was coffee stop.  We sat outside one of the round huts … listening …. listening to …. virtually nothing.  The odd cry of a bird of prey and the jangle of a cow bell.  It is seriously one of the most peaceful places we have ever been.   On top of the world!

We walked through a number of the wooden hutted hamlets and past numerous urbane cattle with their young.  A really lovely place.  Unfortunately J had started with an eye infection the night before and was not feeling his best.  I put this down to why he keep his eyes shut and hands white knuckled on the return chair lift!  As we arrive at the bottom of the lift, he less than calmly said he needed to find the toilet …. it had frightened the shite out of him!   He really was not a happy bunny and has informed me that cable cars are doable at a push, but chair lifts NOOOO!

Sorry, lots of pix of the scenery and little wooden huts, but it was a very special place. 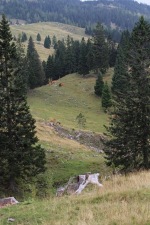 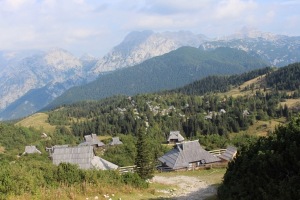 We needed LPG so drove south and then back north a bit (I know I should have sorted it yesterday, nearer Ljubljana) and stopped off at Kamnik … mandatory daily ice-cream and eye drops for J.  Isn’t amazing – we describe symptoms in English and they prescribe antibiotic drops for all off EUR5! 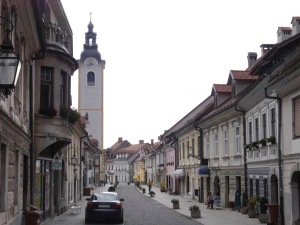 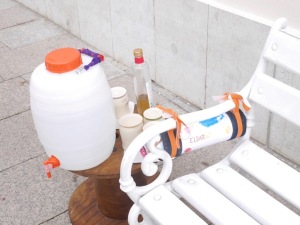 Lot of benches had rolled up mags for people to relax and read … what a lovely idea.

Next Stop:  Logarska Dolina- the second place the Ljubljana TIC girl had said was one of her favourites.   We had picked up an AgriTourism book of camperstops at farms and K had confirmed our arrival for tonight by email with one.  Sally Sat Nav initially tried to take us through a barrier that, even had it been open, a car would have struggled with.  The she tried to take us up a near vertical track.  The concept of farms giving up a space for motorhomes is fab, but not if totally inaccessible!  We will try the book one more time and see if we just bummed out on our first choice.  Fortunately, we had spied a campsite on the route up, just north of Luce and we retraced our steps.  Adjacent to a bubbling brook, 2 other couples staying, small, clean and basic … perfect!  And only EUR13.16 incl Tourist Tax :).  When checking in, K asked Meine Hostess about short walks for the morrow as J only 86% … really helpful again and K had to resort to German; we are only miles from the Austrian border … and she suggested on with a food stop that specialises in local produce. Sounds fun, although most local produce seems to be buckwheat and sour milk or dumplings … not sure what we will get, but when in Rome!

Using the bench with a roof as a laundry drying hut!

Slow leisurely start; waiting for the rain to cease of course!   K ran and did some Pilates; there was kindly a hard standing behind the picnic bench.  And we both showered… always a good thing, occasionally.

Parked up at the start of Romanov Kot, as recommended by Meine Hostess at the campsite.  It is another glacial gorge, however, the valley bed is a sea of scree and rocks.  Quite lunar or post bomb.

One of the prettier beehives,

And the opening of the valley.

But the highlight of today was ….  tarter – massive bowls of soup.  This is the main course of the lunch – all typical of the region …. cottage cheese … 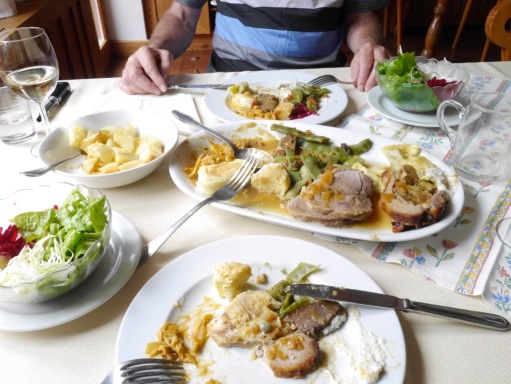 Sdumpling, a meat in a ravioli thingy, three other sorts of roast meats, green beans with a pork cracking sprinkling and an onion dish.  Did I mention the roast potatoes and salad sides?  Pudding was a kind of apple and cinnamon strudel.  I have not see J eat so much in ages and we still have a massive doggy bag for tomorrow.  we will NOT be wanting supper tonight!