Train into Napoli and as cash funds were low, the first stop was an ATM.  With all the warnings of pick pockets, K sensibly held her bag in front of her….. and waited for the cash …. and waited for the cash …. said to J ‘This is taking a long time’ and ….. the machine asked for the next customer.  No cash!  The bag had obscured the very low exit for the money.  Once we had negotiated the airlock door with guard to the bank, we attempted to explain what I had done.  Some language difficulties until K offered French or German …. it then became and excellent conversation in French – understood by both sides!  Oops … come back tomorrow when the bank has done its reconciliation.  A telephone to the bank back home and they said to see if the Naples bank could sort it first too.  Bugger as we meant to move south tomorrow.  Ho Hum.

Naples is the home of the pizza, so we had to have one …. The Margeritta is named after a queen.  So huge that we shared one… really fresh ingredients.

The Duomo is nothing special: rather sombre and the interior is very C18 looking, however it did have a lot of relics.  Do I have a fascination with ancient body parts?

Wall to wall cupboards … More bits of goodness knows who

We then wandered through the iconic narrow tall streets with all the washing, street traders and traffic:  moving and parked.  It is buzzing.  Real life.  J loved it too, as it reminded him of his time living in Amman, Jordan.

Grocery delivery being winched up

Lots of deep fried fast food vendors.  The chap did a nice pose for me 🙂

J had ordered this whilst I was in the UK thinking it was a fishcake… nope …. deep fried macaroni cheese with a bit o’ ham. Had to buy one to see what he was talking about … actually yummy

At San Lorenzo Church we paid to go underground to see a Roman market.  After Pompei and Herculaneum, it was a bit of a poor offering.  However, it does server as a reminder that it doesn’t matter where you dig around here, you will first find Roman remains and then a bit deeper – Greek.

This is the San Lorenzo underground market street, with butcher, baker, candlestick maker and …. a tax office!

Napoli (J here without toilet jokes this time…) has a street called “Christmas Alley” – you folk from Brizzle will know all about the Christmas Steps – not quite the same though – but a tenuous ‘James’ sort of link…  This street as the photos show – is a child’s playground – everything from miniature Santas to grottos to realistic apartment blocks made to scale from timber (nothing to do with Christmas !) – we later saw a large model (to scale) apartment building made from – what’s Italy famous for ? Answers on a thin base please – PASTA !!!  It’s called colloquially – an ‘apastrament’ building !  You lot will believe anything…  The principal Napolitean superstitious instrument is – a gherkin (red chilli)…  You need to have one handy at all times – mainly to protect you from the traffic. One can do lots of things with a gherkin – nose picking, ear wax picking, flossing….  I need to get back on script or else a gorgeous ex-teacher will give me a detention – yippee… !

This Christmas grotto was not made from pasta, or pizza dough (though we did see one that was).  Mostly resin.  Lots of of footballer and nativity figurines and … Kate, Wills and baby! 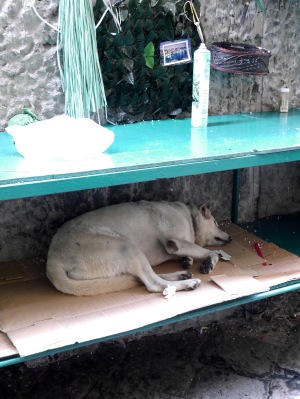 The narrow back streets of Napoli really energised us – all life is there – we will definitely be back.

Quick visit to the charming gentlemen in the bank … yes, Madame was right.  K quickly quipped that she is always right …  the money will be credited to the bank account by Monday.

On Thursday, we decided to join a free guided walking tour – we have enjoyed these tours in many major cities – a tip at the end is always welcomed.   Our guide was Rafaella, highly articulate and witty – a true Napolitean gentleman. We were joined by a young couple from Bulgaria who had flown into Napoli the previous night for a short visit – really nice people – their English was perfect. Rafaella reminded us that Napoli was variously ruled by the Greeks, Romans, French, Spanish and Austro Hungarians… Small wonder they area  truly diverse people. From the start point at the Castello Nuova to the amazing Spanish Quarter, we appreciated again the cosmopolitan nature of this marvellous city. As K has noted, this took me back 30 years to downtown Amman – Stephen, Simon, Sarah and Sinead will well remember – actually, from our April 2015 journey, downtown Amman has not changed – thankfully. Whole families out on the streets, talking, singing – is there anything more important than families ? No. 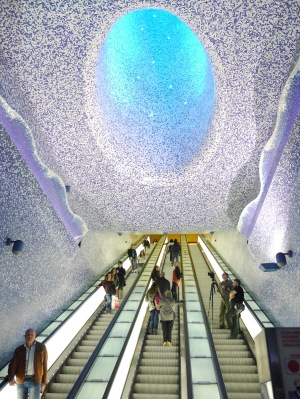 Mosaics at the Toledo metro station in the Spanish quarter.

Lunch in the Spanish quarter. Expresso was complimentary and J loved his pasta dish 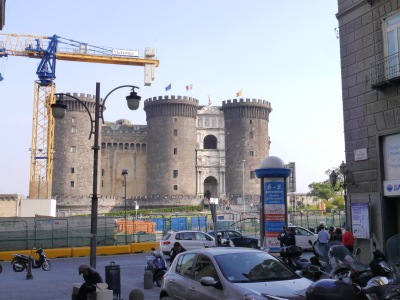 Meeting point for the tour – Castello Nuevo – typical of Napoli … wonderful architecture …. but so much covered with scaffolding and surrounded by cars.

After Unification a gallery very similar to the Vittorio Emmanuelle gallery we saw recently in Milan was built to attempt to reconcile the disputing factions in the South. nothing like the buzz or crowds of Milan.  And note the covered scaffolding on the right … endemic! 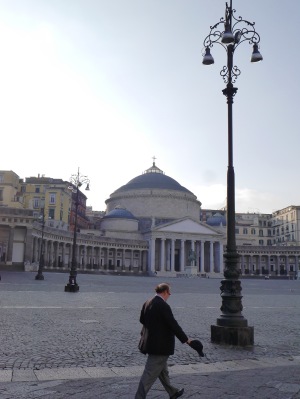 Ex voto shrine, washing and grafitti … this IS Naples. 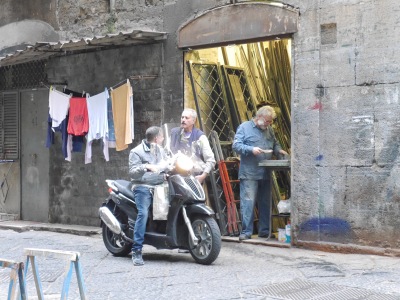 Abandoned car. Despite our tour guide saying that there are few accidents given the crazy driving and parking, we saw a number of scrapped and dented cars. Great place to learn to drive!?

Looking up through the washing to St Elmo castle.

Tripe. All kinds of tripe.

St Jesu church, originally a private palace. Odd inscriptions on each stone have recently been found to contain a tune. 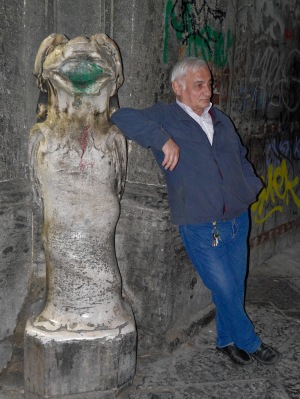 Entrance to one of the gated courtyards. Dragons either side had large mouths for the snuffing out the light beacons … with another chap just hanging around!

On a recommendation from Rafaella, we took the Funiculari railway to the top of the town and Castello St Elmo – staggering views over greater Napoli – K’s photos do it justice. 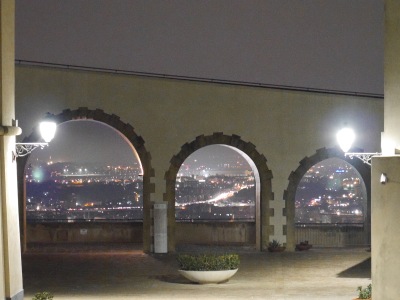 Steps back down to the Metro (parts of the Metro are still being built – Euro 1 per single journey – great value indeed) – stopped at an expensive Carrefour – and caught the Circumvesuvia train back to our beautiful soft cuddly van – can a 28 foot 4 tonne van be cuddly ? Yes – even after 14,000 miles in 6+ months ! In 10 days, we have become quite familiar with the Napolitean transport system.

A beautiful sunlit day greeted us and spurred on by this light from the skies, we ran. (Actually, K spurred me out from under a perfectly warm duvet to get my arse into gear – she is a kind lady – I won’t mention the words ‘boot camp’ – otherwise my rear end might be conferred with the Order of the Boot – actually, I might prefer the Order of the Garter… ?

I ran 4 km at an acceptable pace. K ran 5.25 km – her longest run ever – at a good speed. This is the lady who started ‘norking/running’ 3 months ago – she now encourages me to run – I thought I was the ‘runner’ – changed times – well done my lady.

A jobs morning as check out was not till 2.00 … K’s grey hairs covered over…. J was so expert he now has this job for life!  Hand washing, hoovering and both showered. K

We set SatNav Brad for Paestum, a Greek city dating from 700 BC – before the Romans. Seriously BC.  We expected a scenic seaside route south – sadly, we got prostitute avenue. We mentioned this before – 25 at least ladies at the roadside over 20 kilometres – sad – but no judgement.

We had identified a ‘parking’ area for the night but upon arrival, decided it was a bit lonely. Our second choice was a large parking area – part tarmac part grass – near the Greek ruins. We stretched our legs for an hour – and repaired to a local cafe for a glass of Vino Bianco.  The staff arranged us in leather armchairs in front of a real log fire – it could have been a ‘Rothbury’ fire – K’s home. Refreshed, we returned to our van.

I was playing with my camera – trying to set it on monochrome only and having succeeded, I decided to photograph some night star scenes. I set foot outside and saw a car entering the field. An alarm bell triggered and we went into a well practiced protocol. Anytime we use a ‘parking’ site, we park facing the exit, remove the Krooklock from the steering and leave the van ready in case of a swift drive out. The car I had spotted was doing circles around the field and we activated our evac plan. K drove and I stayed in the rear. We drove to the original choice – an olive grove in a farm – with another van parked nearby – the site looked better on a second viewing. At no time were we in any danger, but all motorhomes have these sensible evac plans. This was only the second time in 6+ months that we used it.

Tomorrow – to to the Greek ruins, following a Greek run – time to dive under my/our duvet and hide….