A few pics from yesterday …

Possibly the largest back pack – ever

Sunset over the pitch we had to flit from

Drink in the local bar before supper …. note leather armchairs and a real fire … we could be at Rothbury! 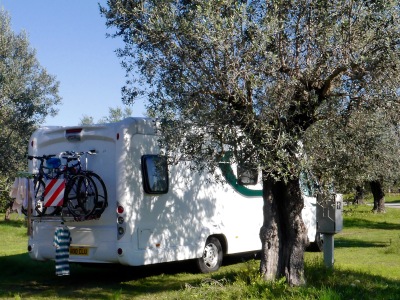 We had a really peaceful night amongst the olive groves.

A short drive to the Paestum parking we had left as our EUR5 ticket was still valid.  We drove around the parking and successfully retrieved one of J’s crocs, that he had left in our scramble to implement our evacuation plan.  Lucky, eh?

It feels like we have done a lot of archaeological sites in the last week, but Paestum has three Greek temples as well as Roman excavations.  The temples are often in Italy tourist advertising and predate the Roman.  BC450 ish … so amazing to be walking around structures that were built and used nearly 2,500 years ago.  In places you can still see the architectural details. 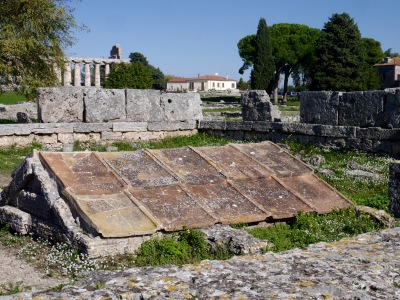 The Greek temples were just huge 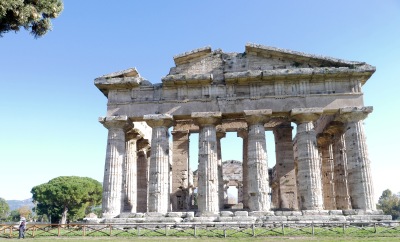 You can just make out J bottom left, which gives some idea of scale. 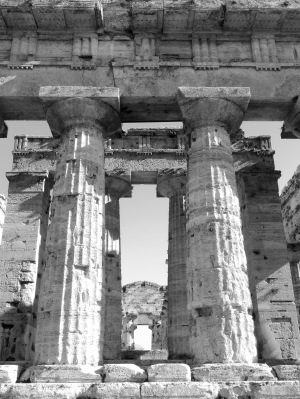 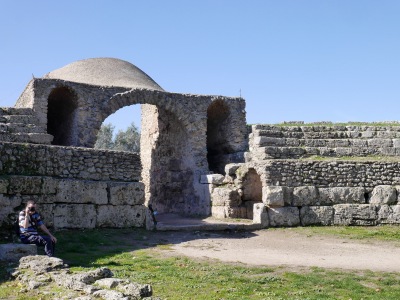 We lunched in the car park and set off, heading south. Across a peninsular and then along the coast road.  The first part was pretty grim … ugly and tatty summer tourist bars and campsites, only inhabited by about 30 prostitutes and the passing (or not passing) traffic.  Soon it was mostly stunning:  stacks and smarter villages clinging to the rocks, bays and beaches.

We missed our intended pitch as we looked for a supermarket … comedic moment when K asked two parked Carabinari and a local chap for directions and they all spoke at once and tried to out do each other in helpfulness!  We then missed a turning and ended up climbing 5km up a mountain in the dark … Brad the Sat Nav wanted us to turn around …. no chance in an 8m van and on hairpin bends!  A the top we finally found somewhere to turn and headed for a nearer parking K found.

These things are meant to be …. beachside and fantastic!  Our lovely Austrian neighbours came for a couple of days and are still here 8 days later!  They warned us about the noise from a nightclub not far away so we followed them to another carpark overnight and then we moved back in the morning.

We both ran in the sun along the front … J 5km with some speed 🙂  We wandered down the beach to look at the sea and both had a simultaneous thought … let’s stay all day and move on tomorrow.

We have had a lovely day …

View from our waterside pitch 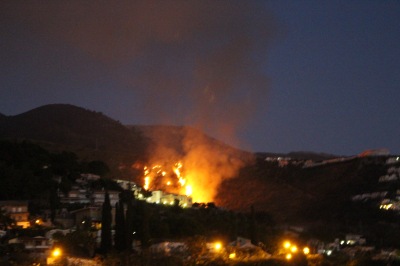 Sadly we have been watching a hillside fire … it does not seem to have eaten any of the houses.