Having largely got ourselves ready to move yesterday we both put in good runs around the slightly hilly campsite and then breakfasted outside.  Being able to sit out and enjoy the sun and the blue skies is truly one of the pleasures of a campsite, but, of course, it does come at a price.

We would possibly have stayed in Rome longer, but the campsite put its price up from the ACSI rate of EUR19 to 28 to take advantage of the Easter holidays.  We’d stayed one night at the higher rate and witnessed the general clearing out of most motorhomes.  We both liked Rome a lot more than we expected.  This was my 4th visit, J’s second.  We had a 3 day honeymoon here 5 years ago but it had been too hot to do much sightseeing.  It was a honeymoon afterall!  I was last here for Maddy’s 16th Birthday two years ago … on being asked what she wanted for her birthday, she did not hold back and asked for a trip to Rome.  I had refused based on price and J and my parents had not held back either and told me to book it as it may be the last time she wanted to come away with me!

This trip we explored further afield than the main tourist trail … which can leave you feeling a bit Roman and Museum’d out.  We really felt that seeing the Mussolini EUR project and Garbatella helped us see Rome as a living city.  Our campsite was a 5 min walk to the Due Ponte station on Rome’s Northern Line – an Urbana train totally covered in graffiti and with green plastic seats BUT it ran every 10 mins.  Only EUR1.5 for 100 minutes once the ticket was stamped, so effectively the ticket covered the whole city.  Eat your heart out London Underground!  The bike tour was just fantastic at getting us through small streets and seeing some of the lesser known sites.

Our destination for today was about 50km north – up to Cerveteri to the Etruscan Necropolis.  The town had been a major commercial centre, trading with Greece, Egypt etc since 9BC.  However, as Rome grew, Cerveteri declined and by 358 (precisely!) it was annexed by Rome.  A few KM from the town, the Etruscans built a massive necropolis for the wealthy to be buried in.  The poor were just cremated.  The necropolis is essentially laid out like a town with streets and the tombs resemble house that the families lived in.  There are over 400 tombs carved out of the tufa rock with stone blocks and mounds of earth.  The tombs are now empty, many have been raided over the centuries, but remaining artefacts are … in the Vatican and the British Museum!  Whilst in Italy we have visited many ancient sites, mostly Greek and Roman, but we think this may have been the oldest as the town went back to 9BC.

They went sqaure when they needed more space for the middle classes … J is directing traffic at a street intersection. 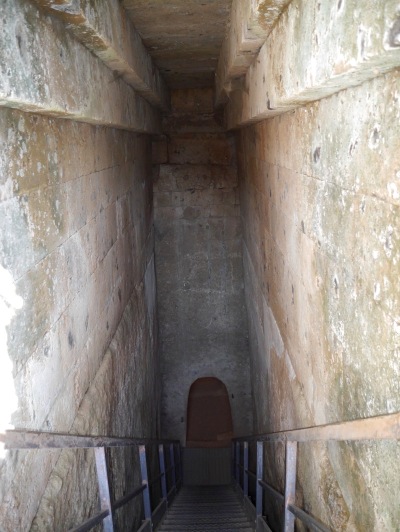 Some were quite a climb down.  Once buried, the entrances were sealed up but then had to be dug out again for the next family member.  So unlike the Christian necropolis we’ve seen, no visiting your deceased relatives.

Tomba dei Rilevi is the only tomb here to have the internal decoration survive … The plaster reliefs are of food, utensils and tools, games and mythical figures.  As with other civilisations, the dead were buried with everything they may need for the afterlife.

We did check and we are OK to park in the car park over night, surrounded by the tumuli … sweet dreams!

A really peaceful night and the only other occupant was another British motorhome.  They kept themselves to themselves and since they had a small daughter, so did we!  In the morning we both ran around the site, passing tombs and no traffic :).  Over breakfast we watched the people come, by car, motorhome and coach – to visit the tombs, walk dogs and watch a small boy bomb about in his new mini quad bike.

Our destination today was Lake Bracciano, one of the volcanic lakes where the Romans escape to, when not flocking in droves to the coast.  We parked up along the lake just past Anguillara: Medieval and apparently the prettiest on the lake.  We had coffee in Chard whilst we weighed up our options.  The town is not big.  There is not much to do or see.  One of the guide books said there is a plethora of good trattorias … decision made…. Lunch. 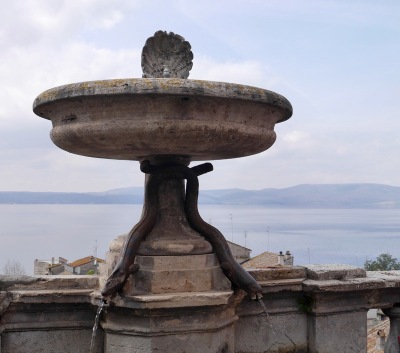 Eel / lake themed fountain … won’t be picking that on the menu … too greasy. 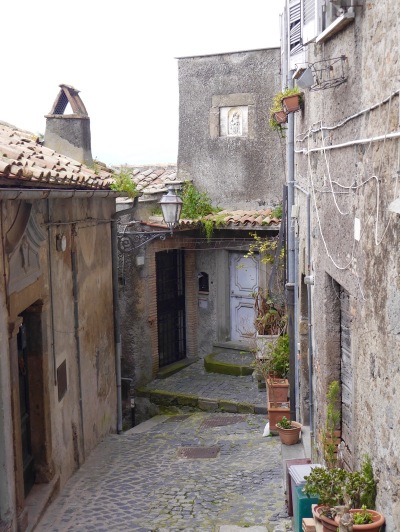 Our selected Trattoria was listed high in TripAdvisor and obviously popular … no room inside, so the waiter put a table together (literally stuck the legs on) on the balcony apologising that the season had not yet started.  They obviously had not expected the other 5 tables that joined us.  It was a memorable meal… this starter had 8 types of cheese and 8 salamis, served with a red pepper relish, honey and a strawberry & balsamic jam.  Our main were J:  ricotta ravioli with tomato and lemon and K:  lake Perch with a sweet and sour orange sauce.  All yummy and washed down with a litre of red.  We retired to Chard after for a huge nanny nap … or did we just pass out?

The morning run was down to the lake, which meant a steep up on the return, but really lovely to be along the lake shore in the sun. 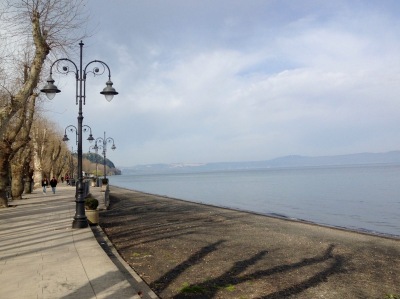 … and the return view.

We lunched on soup in the carpark at Bomarzo’s Parco dei Mostri, although the founder called it Sacro Bosco (sacred wood).  At EUR10 pp it was a bit pricey, but different.  The garden was created by Duke Vicino Orsini 1522-1580 in memory of his wife, one of the Farnese’s.  Grotesque giants, faces, dragons etc were carved out of the existing stone, designed by the bod who finished off St Peter’s Basilica after Michelangelo died.  Once the Duke died, the garden had been largely forgotten and was discovered by Dali and other painters in the 1930’s but not restored until 1953.

The pics say it all …

J trustingly putting his head into it’s mouth…. ‘cos I asked him to!

In keeping with the ‘Mannerist’ style, buildings were lop sided.

We have driven a short distance to Vitorchiano – not because it is in the guide books, but because my Parking App said it had a motorhome parking with services and free electric.  And so it does 🙂  And a superb view of the town. 🙂  But is also has very noisy workmen on the road behind us and I reckon we can expect them back tomorrow … it may be a very early run for us!

Our View … and for free!